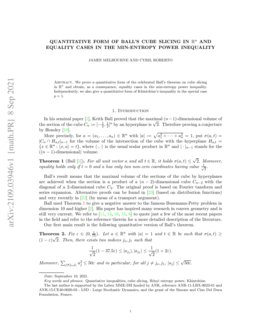 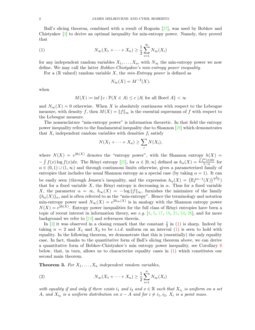 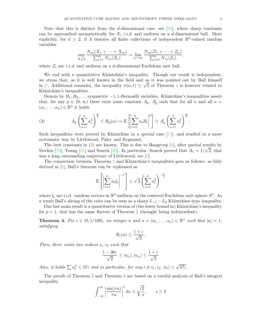 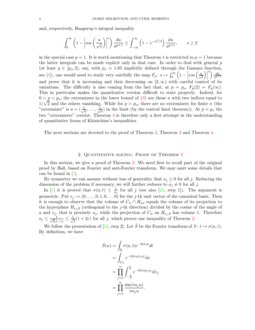 Equality cases in the Anantharam-Jog-Nair inequality

We establish an analogue of the Grothendieck inequality where the rectan...
Shmuel Friedland, et al. ∙

In many instances, information on engineering systems can be obtained th...
Daniel Straub, et al. ∙

In his seminal paper [1], Keith Ball proved that the maximal (n−1)-dimensional volume of the section of the cube Cn\coloneqq[−12,12]n

by an hyperplane is

√2. Therefore proving a conjecture by Hensley [10].

For all unit vector

Ball’s result means that the maximal volume of the sections of the cube by hyperplanes are achieved when the section is a product of a (n−2)-dimensional cube Cn−2 with the diagonal of a 2-dimensional cube C2. The original proof is based on Fourier tansform and series expansion. Alternative proofs can be found in [23] (based on distribution functions) and very recently in [22] (by mean of a transport argument).

Ball used Theorem 1 to give a negative answer to the famous Busemann-Petty problem in dimension 10 and higher [2]. His paper has inspired many research in convex geometry and is still very current. We refer to [11, 14, 16, 15, 6] to quote just a few of the most recent papers in the field and refer to the reference therein for a more detailed description of the literature.

Our first main result is the following quantitative version of Ball’s theorem.

Ball’s slicing theorem, combined with a result of Rogozin [27], was used by Bobkov and Chistyakov [3] to derive an optimal inequality for min-entropy power. Namely, they proved that

for any independent random variables

For a (R valued) random variable X, the min-Entropy power is defined as

The nomenclature “min-entropy power” is information theoretic. In that field the entropy power inequality refers to the fundamental inequality due to Shannon [28] which demonstrates that Xi independent random variables with densities fi satisfy

where N(X)=e2h(X) denotes the “entropy power”, with the Shannon entropy h(X)=−∫f(x)logf(x)dx. The Rényi entropy [25], for α∈[0,∞] defined as hα(X)=∫fα(x)dx1−α for α∈(0,1)∪(1,∞) and through continuous limits otherwise, gives a parameterized family of entropies that includes the usual Shannon entropy as a special case (by taking α=1). It can be easily seen (through Jensen’s inequality, and the expression hα(X)=(Efα−1(X))11−α) that for a fixed variable X, the Rényi entropy is decreasing in α. Thus for a fixed variable X, the parameter α=∞, h∞(X)=−log∥f∥∞, furnishes the minimizer of the family {hα(X)}α, and is often referred to as the “min-entropy”. Hence the terminology and notation min-entropy power used N∞(X)=e2h∞(X) is in analogy with the Shannon entropy power N(X)=e2h(X). Entropy power inequalities for the full class of Rényi entropies have been a topic of recent interest in information theory, see e.g. [4, 5, 17, 18, 21, 24, 26], and for more background we refer to [19] and references therein.

In [3] it was observed in a closing remark that the constant 12 in (1) is sharp. Indeed by taking n=2 and X1 and X2 to be i.i.d. uniform on an interval (1) is seen to hold with equality. In the following theorem, we demonstrate that this is (essentially) the only equality case. In fact, thanks to the quantitative form of Ball’s slicing theorem above, we can derive a quantitative form of Bobkov-Chistyakov’s min entropy power inequality, see Corollary 6 below, that, in turn, allows us to characterize equality cases in (1) which constitutes our second main theorem.

with equality if and only if there exists i1 and i2 and x∈R such that Xi1 is uniform on a set A, and Xi2

is a uniform distribution on

Note that this is distinct from the d-dimensional case, see [20], where sharp constants can be approached asymptotically for Xi i.i.d. and uniform on a d-dimensional ball. More explicitly, for d≥2, if Λ denotes all finite collections of independent Rd-valued random variables

where Zi are i.i.d. and uniform on a d-dimensional Euclidean unit ball.

Denote by B1,B2,… symmetric −1,1-Bernoulli variables. Khintchine’s inequalities assert that, for any p∈(0,∞) there exist some constant Ap, A′p such that for all n and all a=(a1,…,an)∈Rn it holds

Such inequalities were proved by Khintchine in a special case [13], and studied in a more systematic way by Littlewood, Paley and Zygmund.

The connection between Theorem 1 and Khintchine’s inequalities goes as follows: as fully derived in [6], Ball’s theorem can be rephrased as

where ξi are i.i.d. random vectors in R3 uniform on the centered Euclidean unit sphere S2. As a result Ball’s slicing of the cube can be seen as a sharp L−1−L2 Khintchine-type ienquality.

Our last main result is a quantitative version of (the lower bound in) Khintchine’s inequality for p=1, that has the same flavour of Theorem 2 (thought being independent).

Then, there exists two indices i1,i2 such that

in the special case p=1. It is worth mentioning that Theorem 4 is restricted to p=1 because the latter integrals can be made explicit only in that case. In order to deal with general p (at least p∈[po,2), say, with po≃1.85 implicitly defined through the Gamma function, see [8]), one would need to study very carefully the map Fp:s↦∫∞0(1−∣∣∣cos(u√s)∣∣∣s)duup+1 and prove that it is increasing and then decreasing on [2,∞) with careful control of its variations. The difficulty is also coming from the fact that, at p=po, Fp(2)=Fp(∞). This in particular makes the quantitative version difficult to state properly. Indeed, for 0<p<po, the extremizers in the lower bound of (3) are those a with two indices equal to 1/√2 and the others vanishing. While for p>po, there are no extremizers for finite n (the ”extremizer” is a=(1√n,…,1√n)

in the limit (by the central limit theorem)). At

p=po the two ”extremizers” coexist. Theorem 4 is therefore only a first attempt in the understanding of quantitative forms of Khintchine’s inequalities.

The next sections are devoted to the proof of Theorem 2, Theorem 3 and Theorem 4.

In this section, we give a proof of Theorem 2

. We need first to recall part of the original proof by Ball, based on Fourier and anti-Fourier transform. We may omit some details that can be found in

By symmetry we can assume without loss of generality that aj≥0 for all j. Reducing the dimension of the problem if necessary, we will further reduces to aj≠0 for all j.

We follow the presentation of [23, step 2]. Let ^S be the Fourier transform of S:t↦σ(a,t). By definition, we have

Therefore, taking the anti-Fourier transform, Ball obtained the following explicit formula111An alternative explicit formula is given by Franck and Riede [7] (with different normalization). The authors ask if there could be an alternative proof of Ball’s theorem based on their formula. for σ(a,t):

Applying Holder’s inequality, since a21+⋯+a2n=1, one gets

Ball’s theorem follows from the fact that I(aj)\coloneqq∫∞−∞∣∣∣sin(πaju)πaju∣∣∣1/a2jdu≤√2 with equality only if aj=1/√2. Changing variable, this is equivalent to proving that

for every s>2 (for s=2 this is an identity). The latter is known as Ball’s integral inequality and was proved in [1]222An asymptotic study of such integrals can be found in [12]. (see [23, 22] for alternative approaches).

One key ingredient in the proof of Theorem 2 is a reverse form of Ball’s integral inequality given in Lemma 5 below.

where we used that ajo≤1/(√2(1−ε)) and some algebra. This is a contradiction. Therefore, there exists a second index j1≠jo such that I(aj1)≥(1−3ε)√2. Proceeding as for jo, we can conclude that necessarily

Let s≥2 be such that

Set σ=s2−1. We use the technology developed in [1] where it is proved that

Note that, in [1], it is proved that αn<βn so that the left hand side of the latter is positive and in fact an infinite sum of positive terms. Hence, the first term of the sum must not exceed the right hand side. Since β1=13 and α1=√2−1√2, it holds

then there exists indices io and i1 such that

Its proof relies on the following result by Rogozin.

Suppose that, for δ>1

Thus by Theorem 2, there exist io and i1 such that

Interpreting this in terms of the definition θj=√N∞(Xj)/∑iN∞(Xi). This gives,

This ends the proof of the Corollary. ∎

We distinguish between sufficiency and necessity. The former being simpler. - Necessity: Writing for convenience N∞(X1)≥N∞(X2)≥⋯≥N∞(Xn) by Corollary 6 when N∞(X1)>0, equality in (2) implies that

and since symmetric rearrangement preserves min-entropy and reduces the entropy of independent sums, N∞(X1+X2)≥N∞(X∗1+X∗2)≥12(N∞(X∗1)+N(X∗2))=N∞(X1)=N∞(X1+X2). Letting f,g represent the densities of X∗1 and X∗2 respectively, this implies

For this it follows that X∗1 and X∗2 are i.i.d. uniform distributions.

Thus, X1 and X2 are uniform distributions as well. Without loss of generality we may assume that X1 and X2 are uniform on sets of measure 1, K1 and K2. Denote fi=1Ki. Then f1∗f2 is uniformly continuous and f1∗f2(x)→0 with |x|→∞. Indeed, because continuous compactly supported functions are dense in L2, it follows333Given an ε>0, there exists φ continuous and compactly supported such that ∥φ−g∥2<ε/3. Since φ is continuous and compactly supported, it is uniformly continuous, and hence for small enough y, ∥φτy−y∥2<ε/3, Thus ∥gτy−g∥≤∥gτy−φτy∥+∥φτy−φ∥+∥φ−g∥<ε. that for gτy(x)\coloneqqg(x+y), ∥gτy−g∥2→0 for y→0. Further ∥gτy1−gτy2∥2=∥gτy1−y2−g∥2, so that for |y1−y2| sufficiently small, ∥gτy1−gτy2∥2 can be made arbitrarily small as well. Thus,

Taking φi to be continuous, compactly supported functions approximating fi in L2, we have

- Sufficiency: To prove sufficiency, assume that X1 is uniform on a set A, X2 uniform on x−A and Xi a point mass for i≥3 then,

In this section we prove Theorem 4 that resembles the proof of Theorem 2. We need to recall some results from [8].

Assume without loss of generality that ak≠0 for all k. Put

with the convention that a2kF(1a2k)=0 if ak=0 (recall the definition of R1 from (3)). For completeness, let us reproduce the argument using Nazarov and Podkorytov’s presentation [23]. From the identity

applied to s=∑nk=1akBk, we have