Let f:{0,1}^n →{0,1} be a Boolean function. The certificate complexity C(f) is a complexity measure that is quadratically tight for the zero-error randomized query complexity R_0(f): C(f) ≤ R_0(f) ≤ C(f)^2. In this paper we study a new complexity measure that we call expectational certificate complexity EC(f), which is also a quadratically tight bound on R_0(f): EC(f) ≤ R_0(f) = O(EC(f)^2). We prove that EC(f) ≤ C(f) ≤ EC(f)^2 and show that there is a quadratic separation between the two, thus EC(f) gives a tighter upper bound for R_0(f). The measure is also related to the fractional certificate complexity FC(f) as follows: FC(f) ≤ EC(f) = O(FC(f)^3/2). This also connects to an open question by Aaronson whether FC(f) is a quadratically tight bound for R_0(f), as EC(f) is in fact a relaxation of FC(f). In the second part of the work, we upper bound the distributed query complexity D^μ_ϵ(f) for product distributions μ by the square of the query corruption bound (corr_ϵ(f)) which improves upon a result of Harsha, Jain and Radhakrishnan [2015]. A similar statement for communication complexity is open. 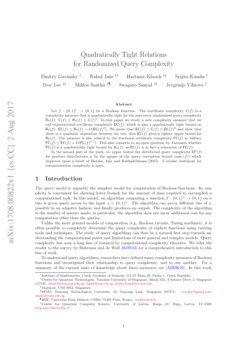 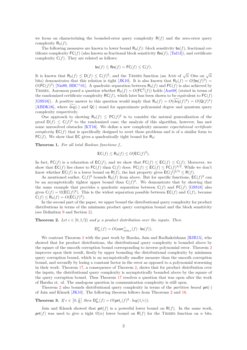 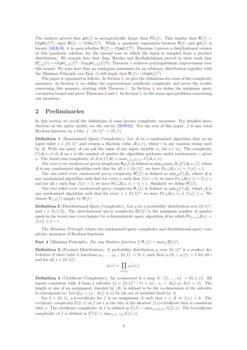 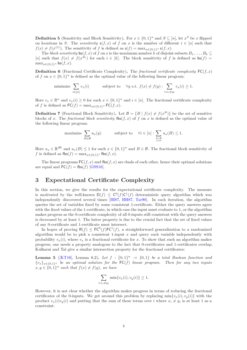 Disjointness through the Lens of Vapnik-Chervonenkis Dimension: Sparsity and Beyond

The disjointness problem - where Alice and Bob are given two subsets of ...
Anup Bhattacharya, et al. ∙

The query model is arguably the simplest model for computation of Boolean functions. Its simplicity is convenient for showing lower bounds for the amount of time required to accomplish a computational task. In this model, an algorithm computing a function f:{0,1}n→{0,1} on n bits is given query access to the input x∈{0,1}n. The algorithm can query different bits of x, possibly in an adaptive fashion, and finally produces an output. The complexity of the algorithm is the number of queries made; in particular, the algorithm does not incur additional cost for any computation other than the queries.

Unlike the more general models of computation (e.g. Boolean circuits, Turing machines), it is often possible to completely determine the query complexity of explicit functions using existing tools and techniques. The study of query algorithms can thus be a natural first step towards understanding the computational power and limitations of more general and complex models. Query complexity has seen a long line of research by computational complexity theorists. We refer the reader to the survey by Buhrman and de Wolf

[BdW02] for a comprehensive introduction to this line of work.

One approach to showing \R0(f)≤\FC(f)2 is to consider the natural generalization of the proof \D(f)≤\C(f)2 to the randomized case; the analysis of this algorithm, however, has met some unresolved obstacles [KT16]. We define a new complexity measure expectational certificate complexity \EC(f) that is specifically designed to avert these problems and is of a similar form to \FC(f). We show that \EC gives a quadratically tight bound for \R0:

For all total Boolean functions f,

As mentioned earlier, \C(f)2 bounds \R0(f) from above. But for specific functions, \EC(f)2 can be an asymptotically tighter upper bound than \C(f)2. We demonstrate that by showing that the same example that provides a quadratic separation between \C(f) and \FC(f) [GSS16] also gives \C(f)=Ω(\EC(f)2). This is the widest separation possible between \EC(f) and \C(f), because \C(f)≤\R0(f)=O(\EC(f)2).

In the second part of the paper, we upper bound the distributional query complexity for product distributions in terms of the minimum product query corruption bound and the block sensitivity (see Definition 9 and Section 2).

Let ϵ∈[0,1/2) and μ a product distribution over the inputs. Then

Theorem 2 also bounds distributional query complexity in terms of the partition bound \prt(⋅) of Jain and Klauck [JK10]. The following theorem follows from Theorems 2 and 16.

Jain and Klauck showed that \prt(f) is a powerful lower bound on \R(f). In the same work, \prt(f) was used to give a tight Ω(n) lower bound on \R(f) for the Tribes function on n bits. The authors proved that \prt(f) is asymptotically larger than \FC(f). This implies that \R(f)=O(\prt(f)3), since \R(f)=O(\bs(f)3). While a quadratic separation between \R(f) and \prt(f) is known [AKK16], it is open whether \R(f)=O(\prt(f)2). Theorem 4 proves a distributional version of this quadratic relation, for the special case in which the input is sampled from a product distribution. We remark here that Jain, Harsha and Radhakrishnan proved in their work that \Dμ1/3(f)=O(\prt1/3(f)2⋅(log\prt1/3(f))2); Theorem 4 achieves polylogarithmic improvement over this bound. We note here that an analogous statement for an arbitrary distribution together with the Minimax Principle (see Fact 4) will imply that \R(f)=O(\prt(f)2).

In this section we recall the definitions of some known complexity measures. For detailed introduction on the query model, see the survey [BdW02]. For the rest of this paper, f is any total Boolean function on n bits, f:{0,1}n→{0,1}.

Let A be a randomized algorithm that as an input takes x∈{0,1}n and returns a Boolean value A(x,r), where r is any random string used by A. With one query A can ask the value of any input variable xi, for i∈[n]. The complexity C(A,x,r) of A on x is the number of queries the algorithm performs under randomness r, given x. The worst-case complexity of A is C(A)=maxr,x∈{0,1}nC(A,x,r).

The zero-error randomized query complexity \R0(f) is defined as minAmaxxEr[C(A,x,r)], where A is any randomized algorithm such that for all x∈{0,1}n, we have Prr[A(x,r)=f(x)]=1.

be a probability distribution over

{0,1}n, and ϵ∈[0,1/2). The distributional query complexity \Dμϵ(f) is the minimum number of queries made in the worst case (over inputs) by a deterministic query algorithm A for which Prx∼μ[A(x)=f(x)]≥1−ϵ.

For any Boolean function f,\Rϵ(f)=maxμ\Dμϵ(f).

is defined as the optimal value of the following linear program:

Let B={B∣f(x)≠f(xB)} be the set of sensitive blocks of x. The fractional block sensitivity \fbs(f,x) of f on x is defined as the optimal value of the following linear program:

The linear programs \FC(f,x) and \fbs(f,x) are duals of each other, hence their optimal solutions are equal and \FC(f)=\fbs(f) [GSS16].

In this section, we give the results for the expectational certificate complexity. The measure is motivated by the well-known \D(f)≤\C0(f)\C1(f) deterministic query algorithm which was independently discovered several times [BI87, HH87, Tar90]. In each iteration, the algorithm queries the set of variables fixed by some consistent 1-certificate. Either the query answers agree with the fixed values of the 1-certificate, in which case the input must evaluate to 1, or the algorithm makes progress as the 0-certificate complexity of all 0-inputs still consistent with the query answers is decreased by at least 1. The latter property is due to the crucial fact that the set of fixed values of any 0-certificate and 1-certificate must intersect.

In hopes of proving \R(f)≤\FC0(f)\FC1(f), a straightforward generalization to a randomized algorithm would be to pick a consistent 1-input x and query each variable independently with probability vx(i), where vx is a fractional certificate for x. To show that such an algorithm makes progress, one needs a property analogous to the fact that 0-certificates and 1-certificates overlap. Kulkarni and Tal give a similar intersection property for the fractional certificates:

However, it is not clear whether the algorithm makes progress in terms of reducing the fractional certificates of the 0-inputs. We get around this problem by replacing min{vx(i),vy(i)} with the product vx(i)vy(i) and putting that the sum of these terms over i where xi≠yi is at least 1 as a constraint:

The expectational certificate complexity \EC(f) of f is defined as the optimal value of the following program:

We use the term “expectational” because the described algorithm on expectation queries at least weight 1 in total from input y, when querying the variables with probabilities being the weights of x. While the informally described algorithm shows a quadratic upper bound on the worst-case expected complexity, in the next section we show a slight modification that directly makes a quadratic number of queries in the worst case.

In this section we prove Theorem 1 (restated below).

To prove the second inequality, we give randomized query algorithms for f with 1-sided error ϵ.

The second inequality of Theorem 1 follows from Claim 6 by standard arguments of \ZPP=\RP∩\coRP.

Let {wx}x∈{0,1}n be an optimal solution to the \EC(f) program. We say that an input y is consistent with the queries made by A on x if yi=xi for all queries i∈[n] that have been made. Also define a probability distribution μy(i)=wy(i)/∑i∈[n]wy(i) for each input y∈{0,1}n.

The complexity bound is clear as A always performs at most ⌈\EC(f)2/ϵ⌉ queries.

For correctness, note that the algorithm outputs 1 on all 1-inputs. Thus assume x is a 0-input from here on in the analysis. Then we have to prove that A outputs 0 with probability at least 1−ϵ. This amounts to showing that the function reduces to a constant 0 function and the algorithm terminates within ⌈\EC(f)2/ϵ⌉ iterations with probability at least 1−ϵ. (For notational convenience, in what follows we will drop the ceilings and assume \EC(f)2/ϵ is an integer.)

We continue by showing an upper and a lower bound on E[T].

3.2 Relation with the Fractional Certificate Complexity

and we are done. ∎

Let {vx}x be an optimal solution to the fractional certificate linear program for f. We first modify each vx to a new feasible solution v′x by eliminating the entries vx(i) that are very small, and boosting the large entries by a constant factor. Namely, let

The second line follows because |B|≤s(f), as B is a minimal sensitive block and therefore every index in B is sensitive. Rearranging the last inequality, we have ∑i∈Bvx(i)≥1/3s(f)vx(i)≥23, and therefore, ∑i∈Bv′x(i)≥1.

Next, wx(i):=√v′x(i) is a feasible solution to the expectational certificate program, as

The second inequality holds by Lemma 5.

Now that we have shown that {wx}x forms a feasible solution to the expectation certificate program, it remains to bound its objective value:

3.3 Relation with the Certificate Complexity

We construct a feasible solution {wx}x for \EC(f) from \C(f). Let Ax be the shortest certificate for x. Assign wx(i)=1 iff i∈Ax, otherwise let wx(i)=0. Let x,y be any two inputs such that f(x)≠f(y). There is a position i where Ax(i)≠Ay(i), otherwise there would be an input consistent with both Ax and Ay, which would give a contradiction. Therefore, wx(i)wy(i)≥1. The value of this solution is maxx∑i∈[n]wx(i)=maxx\C(f,x)=\C(f). ∎

Define the query corruption bound for b, distribution μ and error ϵ as

We now proceed to the proof of Theorem 2 (restated below).

Let ϵ∈[0,1/2) and μ a product distribution over the inputs. Then

We present a deterministic query algorithm, and analyse its performance for inputs sampled according to μ. Examine the following algorithm:

Define all the above random variables to be ⊥ if T(i) does not take place. Now define

First we bound the number of queries made by B. Since B terminates when either t0=2\bs(f) or t1=2\bs(f), it performs at most 4\bs(f)−1 many iterations. On the other hand since η(i) is a product distribution for each i, therefore |A(i)|≤\corr×min,ϵ(f). Therefore, the algorithm makes O(\corr×min,ϵ(f)⋅\bs(f)) many queries.

Now we prove that it errs on at most 4ϵ fraction of the inputs according to μ.

Condition on the events T(i),x∈A(i)⊕s. Furthermore, condition on xL(i). Notice that under this conditioning, the distribution of the input x is η(i)=μ∣xL(i).

Since B runs for at most 4\bs(f)−1<4\bs(f) steps, by Equation (1), linearity of expectation and Markov’s inequality we have that

For i such that T(i) occurs, define S(i):={j∈QA(i)∣xj≠A(i)(j)}. The following claim will play a central role in our analysis.