The ranked retrieval model has rapidly become the de-facto way for search query processing in web databases. Despite the extensive efforts on designing better ranking mechanisms, in practice, many such databases fail to address the diverse and sometimes contradicting preferences of users. In this paper, we present QR2, a third-party service that uses nothing but the public search interface of a web database and enables the on-the-fly processing of queries with any user-specified ranking functions, no matter if the ranking function is supported by the database or not. 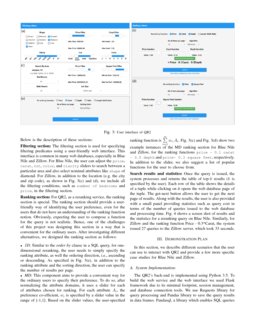 The ranked retrieval model [1, 2] has rapidly become the de-facto way for query processing in web databases. Instead of returning all of the search query matches, the ranked retrieval model orders the matching tuples according to an often proprietary ranking function, and returns the top-k [3]. This model is a natural fit for the web databases, as the short attention span of web users demands the most desirable tuples to be returned first and, in addition, achieving a short response time requires to limit the length of returned results to a small value. Nevertheless, this puts more responsibilities on the web database designer, as the ranking mechanism must properly capture the need of database users. In practice, web users often have diverse and sometimes contradicting preferences on numerous factors while many web databases may not design the most effective ranking functions to reflect them. Examples of such designs range from rental and real estate websites such as Zillow111www.zillow.com to shopping websites such as Blue Nile222www.bluenile.com, the largest diamonds online retailer, for ranking examples of price per square feet for Zillow and the aggregation of depth and table percent for Blue Nile. As a result, there is often a significant gap, in terms of both design and diversity, between the ranking function(s) supported by the web database and the true preferences of the database users.

While ranked retrieval model [1, 2], top-k query processing [3, 4], and building indices for them [5, 6] on one side, and hidden web databases [7, 8, 9] on the other side are well studied in the literature, research on ranked retrieval model on web databases is limited to the two recent papers [10, 11]. Similar to [11], [12] also proposes a third-party service on web databases, however unlike [11], it focuses on faceted search for mobile applications. In this paper, we demonstrate QR2, a working solution based on [11], a third-party service that uses nothing but the public search interface of a web database to enable the on-the-fly processing of queries with any user-specified ranking functions. Proposed algorithms in [11] enable the “Get-Next” primitive that provide an incremental reranking of the results.

Problem definition: Consider a web database D with a top-k interface and an arbitrary, unknown, system ranking function. Given a user query q, a user-specified monotonic ranking function f, and the top-h (h≥0 can be greater than, equal to, or smaller than k) tuples satisfying q according to f, discover the No. (h+1) tuple for q while minimizing the number of queries issued to the database D.

System Overview: Proposed solutions address the problem in two settings: (i) 1D, where the user-desired ranking function is on a single attribute, and (ii) MD, the ranking of two or more attributes. In this paper, we consider a linear combination of the attribute values of each tuple as the score of it. The tuples are ranked based on this score. The algorithms are based on the principle of covering a region of interest specified by the so-called rank-contour of the best-known solution. Generally speaking, for each setting the following algorithms are proposed333For MD, MD-TA, an implementation of TA [3] using 1D-RERANK, is also proposed. (please refer to [11] for more details):

Web Databases: In this demonstration, we provide the reranking service on two major web databases from two different areas, namely Blue Nile and Zillow. As a well-known real-estate web database with millions of entities, Zillow allows us to showcase the performance of the system on a large database. Blue Nile, on the other hand, is the biggest online diamond retailer. What makes Blue Nile interesting in this demonstration is that diamonds have more ranking features such as Carat, Depth, and Table that can show the performance of the system in high dimensions.

In this section we describe QR2’s system architecture, its technical challenges, and the user interface.

Fig. 1 shows the architecture of QR2. Web service is the central component of the architecture, where the users connect via Internet and select the data source. Once a user submits a query along with a ranking preference, the server creates a new session and processes the user’s request. The session variable (user level cache) is used to store the tuples that are already ”seen” while discovering the top-h of the given query, in order to accelerate the query processing and subsequent get-next operations. In addition to the query history, retained in the session variable, 1D-RERANK and MD-RERANK apply an on-the-fly indexing that detects the dense regions and pro-actively crawls top ranked tuples to save on processing future user queries. We use a MYSQL database to store the tuples in the dense region.

In addition to the technical challenges addressed in [11], the following are the main challenges we faced in practice, together with their resolutions:

QR2 has three main sections in its user interface, (i) Filtering section, (ii) Ranking section, and (iii) Search results. Below is the description of these sections:

Filtering section: The filtering section is used for specifying filtering predicates using a user-friendly web interface. This interface is common in many web databases, especially in Blue Nile and Zillow. For Blue Nile, the user can adjust the price, carat, cut, color, and clarity sliders to search between a particular area and also select nominal attributes like shape of diamond. For Zillow, in addition to the location (e.g. the city and zip code), as shown in Fig. 3(c) and (d), we include all the filtering conditions, such as number of bedrooms and price, in the filtering section.

Search results and statistics: Once the query is issued, the system processes and returns the table of top-k results (k is specified by the user). Each row of the table shows the details of a tuple while clicking on it opens the web database page of the tuple. The get-next button allows the user to get the next page of results. Along with the results, the user is also provided with a small panel providing statistics such as query cost in terms of the number of queries issued to the web database and processing time. Fig. 4 shows a screen shot of results and the statistics for a reranking query on Blue Nile. Similarly, for Zillow and the ranking function Price - 0.3*Carat, the system issued 27 queries to the Zillow server, which took 33 seconds.

In this section, we describe different scenarios that the user can use to interact with QR2 and provide a few more specific case studies for Blue Nile and Zillow.

The QR2’s back-end is implemented using Python 3.5. To build the web service and the web interface we used Flask framework due to its minimal footprint, session management, and database connection tools. We use Requests library for query processing and Pandas library to save the query results in data frames. Pandasql, a library which enables SQL queries over pandas data frames, is used to facilitate the query processing phase. On the client side, Javascript, HTML, and CSS are used to parse the results and show them to the user.

1D: The reranking, in this case, is on a single attribute. For both Zillow and Blue Nile and for queries with different filtering predicates, we will choose different attributes for ranking. Also, to construct the rankings with different correlations with the system ranking function, we will test the performance of algorithms in both ascending and descending orders.

On-the-fly indexing: Indexing the dense regions for future is the main technique used in 1D-RERANK and MD-RERANK to resolve the performance issues of both (1D/MD)-BASELINE and (1D/MD)-BINARY. Showing the effectiveness of this technique is part of the demonstration plan. To do so, after issuing multiple queries, we will track the performance of (1D/MD)-RERANK in terms of both processing time and the number of submitted queries to the web database.

Best v.s. worse cases: Finally, we will demonstrate some of the best and worst case scenarios to show efficiency and limitations of the system. For example, we will show that when a large number of tuples have the same value V on an attribute Ai, the performance of the system may drop significantly. That is because, in order to identify the next top tuple, the system may first need to crawl all tuples where t[Ai]=V

. On the other hand, when the attribute values follow a uniform distribution on the domain space, even the binary search strategy performs well. Here are two of such functions:

We proposed to demonstrate QR2, a third party service that enables the on-the-fly processing of queries with any ranking function defined by the user to a web database. Our system uses nothing but the public search interface of the web database and addresses a wide range of users preferences in ranking the results, even if not supported by the database.

This contribution was made possible by NPRP grant No. 07-794-1-145 from the Qatar National Research Fund (a member of Qatar Foundation). Any findings, conclusions, or recommendations expressed in this material are those of the authors and do not necessarily reflect the views of the sponsors listed above.