The distribution of certain Mahonian statistic (called BAST) introduced by Babson and Steingrímsson over the set of permutations that avoid vincular pattern 132, is shown bijectively to match the distribution of major index over the same set. This new layer of equidistribution is then applied to give alternative interpretations of two related q-Stirling numbers of the second kind, studied by Carlitz and Gould. An extension to an Euler-Mahonian statistic over the set of ordered partitions presents itself naturally. During the course, a refined relation between BAST and its reverse complement STAT is derived as well. 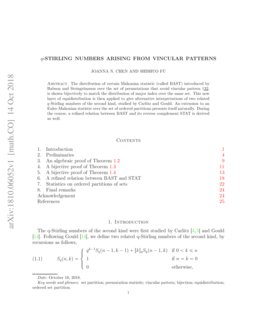 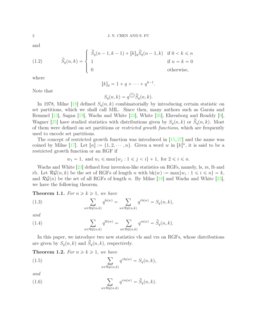 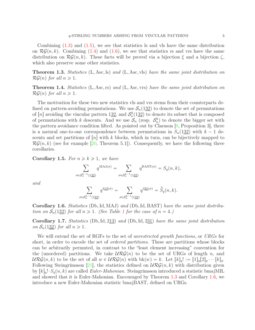 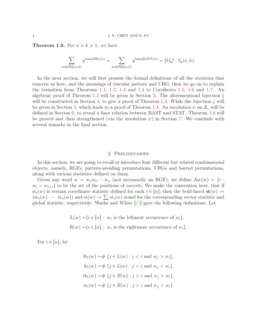 In 1978, Milne [18] defined Sq(n,k) combinatorially by introducing certain statistic on set partitions, which we shall call MIL. Since then, many authors such as Garsia and Remmel [13], Sagan [19], Wachs and White [23], White [26], Ehrenborg and Readdy [9], Wagner [25] have studied statistics with distributions given by Sq(n,k) or ˜Sq(n,k). Most of them were defined on set partitions or restricted growth functions, which are frequently used to encode set partitions.

In this paper, we introduce two new statistics vls and vrs on RGFs, whose distributions are given by Sq(n,k) and ˜Sq(n,k), respectively.

have the same joint distribution on

The motivation for these two new statistics vls and vrs stems from their counterparts defined on pattern-avoiding permutations. We use \SSn(132–––) to denote the set of permutations of [n] avoiding the vincular pattern 132–––, and \SSkn(132–––) to denote its subset that is composed of permutations with k descents. And we use \SSn (resp. \SSkn) to denote the bigger set with the pattern avoidance condition lifted. As pointed out by Claesson [8, Proposition 3], there is a natural one-to-one correspondence between permutations in Sn(132–––) with k−1 descents and set partitions of [n] with k blocks, which in turn, can be bijectively mapped to RG(n,k) (see for example [20, Theorem 5.1]). Consequently, we have the following three corollaries.

We will extend the set of RGFs to the set of unrestricted growth functions, or URGs for short, in order to encode the set of ordered partitions. These are partitions whose blocks can be arbitrarily permuted, in contrast to the “least element increasing” convention for the (unordered) partitions. We take URG(n) to be the set of URGs of length n, and URG(n,k) to be the set of all w∈URG(n) with bk(w)=k. Let [k]q!:=[1]q[2]q⋯[k]q. Following Steingrímsson [21], the statistics defined on URG(n,k) with distribution given by [k]q!⋅Sq(n,k) are called Euler-Mahonian. Steingrímsson introduced a statistic bmajMIL and showed that it is Euler-Mahonian. Encouraged by Theorem 1.3 and Corollary 1.6, we introduce a new Euler-Mahonian statistic bmajBAST, defined on URGs.

In the next section, we will first present the formal definitions of all the statistics that concern us here, and the meanings of vincular pattern and URG, then we go on to explain the transition from Theorems 1.1, 1.2, 1.3 and 1.4 to Corollaries 1.5, 1.6 and 1.7. An algebraic proof of Theorem 1.2 will be given in Section 3. The aforementiond bijection ξ will be constructed in Section 4, to give a proof of Theorem 1.3. While the bijection ζ will be given in Section 5, which leads to a proof of Theorem 1.4. An involution ψ on \SSn will be defined in Section 6, to reveal a finer relation between BAST and STAT. Theorem 1.8 will be proved and then strengthened (via the involution ψ) in Section 7. We conclude with several remarks in the final section.

In this section, we are going to recall or introduce four different but related combinatorial objects, namely, RGFs, pattern-avoiding permutations, URGs and barred permutations, along with various statistics defined on them.

Given any word w=w1w2⋯wn (not necessarily an RGF), we define Asc(w)={i:wi<wi+1} to be the set of the positions of ascents. We make the convention here, that if sti(w) is certain coordinate statistic defined for each i∈[n], then the bold-faced st(w):=(st1(w) ⋯ stn(w)) and st(w):=∑isti(w)

stand for the corresponding vector statistic and global statistic, respectively. Wachs and White

Now we are ready to give descriptions of vls and vrs, which can be seen as variants of ls and rs. Let pro(w) be the position of the rightmost one in w. For i∈[n], let

A less obvious relation is

Babson and Steingrímsson [2] showed that most of the Mahonian statistics in the literature can be expressed as the sum of vincular pattern functions. We list some of them below.

where rc stands for the function composition of the reversal r and the complement c. Given a permutation p=p1p2⋯pn, recall that

Actually there exists a stronger relation between the two Mahonian statistics MAJ and STAT. In the same paper [2], Babson and Steingrímsson conjectured the bistatistic (des,STAT) is Euler-Mahonian, i.e., it is equidistributed with (des,MAJ). This was first proved by Foata and Zeilberger [10], see also [3, 16, 8, 11] for further developements along this line. Since clearly des(prc)=des(p) for any permutation p, we include here the equivalent version for BAST, which will also be needed in Section 7.

The following relation parallels (2.2), and has previously been observed in [12, Lemma 5.4]. For any permutation p∈\SSn,

Wachs [22] introduced the more general σ-RGFs, to encode the set of ordered partitions. But the following notion of unrestricted growth function seems to be more appropriate for our purpose.

For a given ordered set partition of [n], say π=B1/B2/⋯/Bk, we form a word w=w1⋯wn by taking wi=j, if and only if i∈Bj. This is clearly seen to be a bijection between ordered partitions of [n] into k blocks, and URG(n,k).

There are in total six ordered partitions of {1,2,3} into two blocks, and also six words in URG(3,2). We list them below in one-to-one correspondence, with the first three being the (unordered) ones in RG(3,2).

Besides the total order between all the letters of a given word w, imposed by their numerical values, we also need to consider a partial order ≻. By a≻b we mean there exists some wi=a and wj=b, with i∈L(w), j∈R(w) and i>j.

Now we can recall the statistics MIL,bMAJ,bmajMIL used in [21], reformulated in terms of words, as well as a new statistic block nondescents, denoted by bndes. For any word w, we let

Note that although for each w∈RG(n),

As noted by Claesson [8, Proposition 3] or even earlier, there is a natural bijection sending a set partition of [n] with k blocks, to a 132–––-avoiding permutation of [n] with k−1 descents. Combining this with the bijection between set partitions and RGFs, we may construct a bijection θ directly from \SSn(132–––) to RG(n) that sends des+1 to bk. However, in order to deal with URGs and prove Theorem 1.8, we define our bijection θ on a bigger set, called the barred permutations, whose definition we give below.

A barred permutation \widebarp is a permutation p decorated with certain amount of bars in between its consecutive letters, according to the following rules.

p is then called the base permutation of \widebarp. For n>a+b≥0, a≥0 and b≥0, we denote by \widebar\SSn the set of all barred permutations of n, and by \widebar\SSa,bn the subset with exactly a active bars and b fixed bars.

We note that \SSkn can be embedded naturally in \widebar\SSn as the subset \widebar\SS0,kn, simply by placing a bar at every descent. Consequently, the preimage of each \widebarp∈\widebar\SS0,kn is exactly its base permutation p. For this reason, we will use both p and \widebarp interchangeably when it has no active bars.

Given a barred permutation \widebarp∈\widebar\SSn, we now construct a URG w=θ(\widebarp)=w1⋯wn, such that

The six URGs listed in Example 2.3 are reproduced below, as the images of six barred permutations, under the map θ.

By our construction, the image of each barred permutation in \widebar\SSn is clearly in URG(n), hence θ is well-defined. The injectivity of θ is also clear. The inverse of θ can be described as reading w from left to right, and recording the positions of its largest letters bk(w), then putting a bar, next recording the positions of bk(w)−1, putting a bar, and so on and so forth. Therefore θ is indeed a bijection.

When we restrict θ so that the image set is RG(n), then the defining condition for restricted growth functions, namely,

forces p to avoid pattern 132–––, and \widebarp to be without any active bars, and vice versa.

It remains to show the equivalence of those statistics. The first four

can be easily checked using the definitions. In particular, Id(p)=Asc(w) and pn=pro(w) hold for all \widebarp∈\widebar\SSn. Thanks to (2.1), (2.2) and (2.4), the equivalence of the remaining two is somewhat routine and thus omitted. ∎

In this section, we will give an algebraic proof of Theorem 1.2. The following recurrence given by Wagner [24] will be needed.

We need two local operators δ+ and δ−, which are crucial in the construction of ξ and its inverse ξ−1. For any word w composed of nonnegative integers, take any letter x∈w, we define

Note that u and v are the prefix and suffix of w, respectively, and there are no restrictions on the relative orders among c1,c2,…,ct. We define our bijection ξ according to the following three cases.

It can be easily checked that in all three cases,

In the following two examples, we calculate two triples of statistics that turn out to be the same, via ξ described above.