A Pyramid Attention Network(PAN) is proposed to exploit the impact of global contextual information in semantic segmentation. Different from most existing works, we combine attention mechanism and spatial pyramid to extract precise dense features for pixel labeling instead of complicated dilated convolution and artificially designed decoder networks. Specifically, we introduce a Feature Pyramid Attention module to perform spatial pyramid attention structure on high-level output and combining global pooling to learn a better feature representation, and a Global Attention Upsample module on each decoder layer to provide global context as a guidance of low-level features to select category localization details. The proposed approach achieves state-of-the-art performance on PASCAL VOC 2012 and Cityscapes benchmarks with a new record of mIoU accuracy 84.0 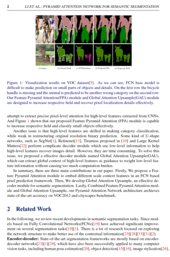 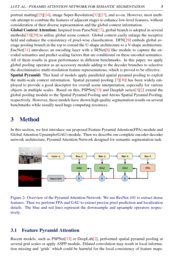 In this paper, we address the semantic segmentation task with a deep net...
Mengyu Liu, et al. ∙

With the recent development of convolutional neural networks (CNNs)

, we attempt to extract precise pixel-level attention for high-level features extracted from CNNs. As Figure

, which have also been successfully applied to many computer vision tasks, including human pose estimation

[Zhang et al.(2018b)Zhang, Tian, Kong, Zhong, and Fu][Tong et al.(2017)Tong, Li, Liu, and Gao], and so-on. However, most methods attempt to combine the features of adjacent stages to enhance low-level features, without consideration of their diverse representation and the global context information.

Global Context Attention: Inspired from ParseNet[Liu et al.(2015a)Liu, Rabinovich, and Berg], global branch is adopted in several methods[Zhao et al.(2017)Zhao, Shi, Qi, Wang, and Jia][Yu et al.(2018)Yu, Wang, Peng, Gao, Yu, and Sang] to utilize global scene context. Global context easily enlarge the receptive field and enhance the consistency of pixel-wise classification. DFN[Yu et al.(2018)Yu, Wang, Peng, Gao, Yu, and Sang] embeds global average pooling branch in the top to extend the U-shape architecture to a V-shape architecture. EncNet[Zhang et al.(2018a)Zhang, Dana, Shi, Zhang, Wang, Tyagi, and Agrawal] introduces an encoding layer with a SENet[Hu et al.(2017)Hu, Shen, and Sun] like module to capture the encoded semantics and predict scaling factors that are conditional on these encoded semantics. All of them results in great performance in different benchmarks. In this paper, we apply global pooling operator as an accessory module adding to the decoder branches to select the discriminative multi-resolution feature representations, which is proved to be effective.

Inspired by Attention Mechanism, we consider how to provide precise pixel-level attention for high-level features extracted from CNNs. In the current semantic segmentation architecture, the pyramid structure can extract different scale of feature information and increase receptive field effectively in pixel-level, while this kind of structure lacks global context prior attention to select the features channel-wise as in SENet[Hu et al.(2017)Hu, Shen, and Sun] and EncNet[Zhang et al.(2018a)Zhang, Dana, Shi, Zhang, Wang, Tyagi, and Agrawal]

. On the other hand, using channel-wise attention vector is not enough to extract multi-scale features effectively and lack pixel-wise information.

With above observation, we propose Feature Pyramid Attention (FPA) module. The pyramid attention module fuses features from under three different pyramid scales by implementing a U-shape structure like Feature Pyramid Network. To better extract context from different pyramid scales, we use 3×3, 5×5, 7×7 convolution in pyramid structure respectively. Since the resolution of high-level feature maps is small, using large kernel size doesn’t bring too much computation burden. Then the pyramid structure integrates information of different scales step-by-step, which can incorporate neighbor scales of context features more precisely. Then the origin features from CNNs is multiplied pixel-wisely by the pyramid attention features after passing through a 1×1 convolution. We also introduce global average pooling branch adding with the output features, which improve our FPA module performance further. The final module structure is shown in Figure 3.

Recent research has shown that combining CNNs with well-designed pyramid module can obtain considerable performance and capability to obtain category information. We consider that the main character of decoder module is to repair category pixel localization. Furthermore, high-level features with abundant category information can be used to weight low-level information to select precise resolution details.

res5b blocks, so the output size of feature maps from ResNet is 1/16 of the input image like DeepLabv3+. We also replace the 7x7 convolutional layer in the original ResNet-101 by three 3×3

convolutional layers like PSPNet and DUC. We use the FPA module to gather dense pixel-level attention information from the output of ResNet. Combined with global context, the final logits are follow by GAU module to generate the final prediction maps.

For a practical deep learning system, devil is always in the details. We use the "poly" learning rate policy where the initial rate is multiplied by

, and train the network using mini-batch stochastic gradient descent (SGD) with batch size 16, momentum 0.9 and weight decay 0.0001. The cross-entropy error at each pixel over the categories is applied as our loss function. We adopt randomly left-right flipping and random scaling between 0.5 and 2 for all datasets during training.

The PASCAL VOC 2012 contains 20 foreground object classes and one background class. The original dataset involves 1,464 images for training, 1,449 images for validation and 1,456 images for testing. The dataset is augmented by the Semantic Boundaries Dataset[Hariharan et al.(2015)Hariharan, Arbeláez, Girshick, and Malik], resulting in 10,582 images for training. In this subsection, we use PASCAL VOC 2012 validation set for the evaluation and our crop size is 512×512. The performance is measured in terms of pixel intersection-over-union (IOU) averaged across the 21 classes with the single-scale input.

First, we experiment the performance of the base ResNet-101 with dilated convolution mentioned above and directly upsample the feature network’s output. To evaluate our Feature Pyramid Attention(FPA) module, we perform FPA module after ResNet with direct upsampling as the same as the baseline. In detail, we conduct experiments with several setting, including pooling types of max and average, attention with pyramid structure or just one branch using global context similar to SENet, different kernel size in pyramid structure, with or without global pooling branch.

Ablation for pooling type: We notice that average pooling works better than max pooling in all settings. For using all the convolution with 3×3 kernel size, ‘AVE’ setting improves the performance from 77.13% to 77.54% compared to ‘MAX’ setting. So we adopt average pooling in our final module.

Ablation for kernel size: For the pyramid structure using average pooling, we use large kernel convolution ‘C357’ to replace 3×3 kernel size, shown in Figure 3. As mentioned in Section 3.1, the resolutions of feature maps in the pyramid structure are 16×16, 8×8, 4×4 respectively, so using large kernel setting doesn’t bring too much calculation burden. This improves performance from 77.54% to 78.19%.

stride=16). Since PSPNet didn’t report performance on VOC validation set, we implement the pyramid pooling module proposed in PSPNet combined with our base model. We use the same training protocol and keep the same output stride for fair comparison. The results are shown in Table 2. Our FPA module is more capable than the other two modules. Compared to the pyramid pooling module and DeepLabv3, our FPA module outperforms DeepLabv3 by almost 1.2% under the same output stride.

We first evaluate GAU module combined with ResNet101 baseline, then we experiment FPA and GAU together on VOC 2012 val set. As for the design of decoder module, we evaluate three different design respectively, (1) only using low-level features from skip-connection without global context attention branch, (2) using 1×1 convolution to reduce channels of low-level features in GAU module, (3) replace 1×1 convolution with 3×3 convolution to preform channel reduction. As shown in Table 3, without global context attention branch, our decoder module merely improves performance from 72.60% to 73.56%. Then we add global pooling operation to extract global context attention information, which improves performance from 73.56% to 77.84% significantly.

As we take GAU as a slight and effective decoder module, we also compare with Global Convolution Network[Peng et al.(2017)Peng, Zhang, Yu, Luo, and Sun] and Discriminate Feature Network(DFN)[Yu et al.(2018)Yu, Wang, Peng, Gao, Yu, and Sang]. The results are shown in Table 4. The structure of ‘DFN(ResNet101+RRB)’ is a ResNet101 combined with proposed Refinement Residual Block(RRB) as decoder module. Our decoder module outperforms RRB by 1.2%. It is worth noted that Global Convolution Network used extra COCO dataset combined with VOC dataset for training and obtained 77.50%, while our decoder module can achieve 77.84% without COCO dataset for training.

Combined our best setting on Feature Pyramid Attention and Global Attention Upsampling module, we experiment the complete network architecture—Pyramid Attention Network (PAN) on PASCAL VOC 2012 test set. In evaluation, we apply the multi-scale inputs (with scales={0.5,0.75,1.0,1.25,1.5,1.75}) and also left-right flipped the images in evaluation, as listed in Table 5. Since the PASCAL VOC 2012 dataset provides higher quality of annotation than the augmented datasets [9], we further fine-tune our model on PASCAL VOC 2012 trainval set for evaluation on the test set. More performance details are listed in Table 6. Finally our proposed approach achieve performance of 84.0% without MS-COCO [Lin et al.(2014)Lin, Maire, Belongie, Hays, Perona, Ramanan, Dollár, and Zitnick] and Dense-CRF post-processing[Jampani et al.(2016)Jampani, Kiefel, and Gehler].

The Cityscapes contains 30 classes, and 19 of them are considered for training and evaluation. The dataset contains 5,000 finely annotated images and 19,998 images with coarse annotation. In detail, the fine annotated images are split into training, validation and testing sets with 2,979, 500 and 1,525 images respectively. During training, we didn’t use coarse annotation dataset. Our crop size of image is 768×768. We also used ResNet101 as base model like in Section 4.1. The performance on the test set are reported in Table 7.

This work is supported by the National Natural Science Foundation of China (Nos. 61471044).