Pure gaps on curves with many rational places 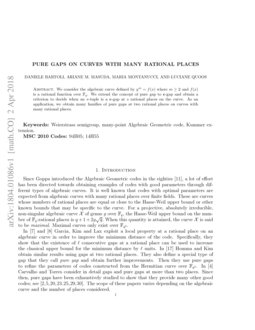 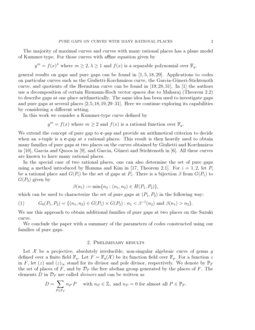 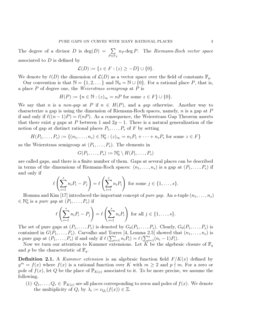 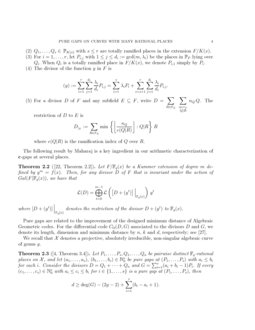 Since Goppa introduced the Algebraic Geometric codes in the eighties [11], a lot of effort has been directed towards obtaining examples of codes with good parameters through different types of algebraic curves. It is well known that codes with optimal parameters are expected from algebraic curves with many rational places over finite fields. These are curves whose numbers of rational places are equal or close to the Hasse-Weil upper bound or other known bounds that may be specific to the curve. For a projective, absolutely irreducible, non-singular algebraic curve X of genus g over Fq, the Hasse-Weil upper bound on the number of Fq-rational places is q+1+2g√q. When this quantity is attained, the curve X is said to be maximal. Maximal curves only exist over Fq2.

In [7] and [8] Garcia, Kim and Lax exploit a local property at a rational place on an algebraic curve in order to improve the minimum distance of the code. Specifically, they show that the existence of ℓ consecutive gaps at a rational place can be used to increase the classical upper bound for the minimum distance by ℓ units. In [17] Homma and Kim obtain similar results using gaps at two rational places. They also define a special type of gap that they call pure gap and obtain further improvements. Then they use pure gaps to refine the parameters of codes constructed from the Hermitian curve over Fq2. In [4] Carvalho and Torres consider in detail gaps and pure gaps at more than two places. Since then, pure gaps have been exhaustively studied to show that they provide many other good codes; see [20, 29, 30, 23, 25, 5, 2]. The scope of these papers varies depending on the algebraic curve and the number of places considered.

The majority of maximal curves and curves with many rational places has a plane model of Kummer-type. For those curves with affine equation given by

general results on gaps and pure gaps can be found in [1, 5, 29, 18]. Applications to codes on particular curves such as the Giulietti-Korchmáros curve, the Garcia-Güneri-Stichtenoth curve, and quotients of the Hermitian curve can be found in [28, 19, 31]. In [1]

2.2) to describe gaps at one place arithmetically. The same idea has been used to investigate gaps and pure gaps at several places [2, 5, 18, 19, 29, 30, 31]. Here we continue exploring its capabilities by considering a different setting.

In this work we consider a Kummer-type curve defined by

We extend the concept of pure gap to c-gap and provide an arithmetical criterion to decide when an s-tuple is a c-gap at s rational places. This result is then heavily used to obtain many families of pure gaps at two places on the curves obtained by Giulietti and Korchmáros in [10], Garcia and Quoos in [9], and Garcia, Güneri and Stichtenoth in [6]. All these curves are known to have many rational places.

In the special case of two rational places, one can also determine the set of pure gaps using a method introduced by Homma and Kim in [17, Theorem 2.1]. For i=1,2, let Pi be a rational place and G(Pi) be the set of gaps at Pi. There is a bijection β from G(P1) to G(P2) given by

which can be used to characterize the set of pure gaps at (P1,P2) in the following way:

We use this approach to obtain additional families of pure gaps at two places on the Suzuki curve.

We conclude the paper with a summary of the parameters of codes constructed using our families of pure gaps.

Let X be a projective, absolutely irreducible, non-singular algebraic curve of genus g defined over a finite field Fq. Let F=Fq(X) be its function field over Fq. For a function z in F, let (z) and (z)∞ stand for its divisor and pole divisor, respectively. We denote by PF the set of places of F, and by DF the free abelian group generated by the places of F. The elements D in DF are called divisors and can be written as

The degree of a divisor D is deg(D)=∑P∈PFnPdegP. The Riemann-Roch vector space associated to D is defined by

We denote by ℓ(D) the dimension of L(D) as a vector space over the field of constants Fq.

We say that n is a non-gap at P if n∈H(P), and a gap otherwise. Another way to characterize a gap is using the dimension of Riemann-Roch spaces, namely, n is a gap at P if and only if ℓ((n−1)P)=ℓ(nP). As a consequence, the Weierstrass Gap Theorem asserts that there exist g gaps at P between 1 and 2g−1. There is a natural generalization of the notion of gap at distinct rational places P1,…,Ps of F by setting

as the Weierstrass semigroup at (P1,…,Ps). The elements in

are called gaps, and there is a finite number of them. Gaps at several places can be described in terms of the dimensions of Riemann-Roch spaces: (n1,…,ns) is a gap at (P1,…,Ps) if and only if

Now we turn our attention to Kummer extensions. Let K be the algebraic closure of Fq and p be the characteristic of Fq.

A Kummer extension is an algebraic function field F/K(x) defined by ym=f(x) where f(x) is a rational function over K with m≥2 and p∤m. For a zero or pole of f(x), let Q be the place of PK(x) associated to it. To be more precise, we assume the following.

The following result by Maharaj is a key ingredient in our arithmetic characterization of c-gaps at several places.

Let F/Fq(x) be a Kummer extension of degree m defined by ym=f(x). Then, for any divisor D of F that is invariant under the action of Gal(F|Fq(x)), we have that

We start this section by generalizing the concept of gap to c-gap at several places.

Lundell and McCullough proved a bound for the minimum distance d called generalized floor bound. Next we state their result using the c-gap terminology.

Theorem 2.3 can be seen as a particular case of Theorem 3.2.

There are instances in which we can apply Theorem 3.2, but not Theorem 2.3. This occurs when some ci=0 and a, b are not pure gaps, or when ai≤bi and aj≥bj for some i,j.

and the restriction of this divisor to K(x) is

Our next goal is to obtain families of pure gaps on specific curves using Theorem 3.3.

The Giulietti-Korchmáros curve over Fq6 is a non-singular curve in PG(3,K) defined by the affine equations:

It has genus g=(q3+1)(q2−2)2+1, and the number of its Fq6-rational places is q8−q6+q5+1. The GK curve first appeared in [10] as a maximal curve over Fq6, since the latter number coincides with the Hasse-Weil bound, q6+2gq3+1. The GK curve is the first example of a maximal curve that is not Fq6-covered by the Hermitian curve, provided that q>2.

A plane model for the GK curve is given by the affine equation:

Let F=Fq6(x,y)/Fq6 be its function field. We denote by P∞ the only place of F associated to the pole of x.

It remains to show that the condition Theorem 3.3(i) holds in the above cases. We compute

We start by investigating when Theorem 3.3(ii) does not hold. For i=1, we have that

3.2. Pure gaps on curves with many rational places

We now consider curves with many rational places that appeared in [9]. The first curve is defined over Fq2n by

Suppose q is even. On the curve X1 defined by

let P∞ be the unique place at infinity and P1 be a totally ramified place different from P∞. We have that:

where m a divisor of q2−1. The common roots of the numerator and the denominator belong to Fq and satisfy x2+x+1=0. We denote by d the gcd(m,q−1).