Although consistency has been a long-standing issue in dialogue agents, we show best-performing persona-conditioned generative models still suffer from high insensitivity to contradiction. Current approaches for improving consistency rely on supervised external models and labels which are demanding. Inspired by social cognition and pragmatics, we model public self-consciousness in dialogue agents through an imaginary listener to improve consistency. Our approach, based on the Rational Speech Acts framework (Frank Goodman, 2012), attempts to maintain consistency in an unsupervised manner requiring neither additional annotations nor pretrained external models. We further extend the framework by learning the distractor supply for the first time. Experimental results show that our approach effectively reduces contradiction and improves consistency on Dialogue NLI (Welleck et al., 2019) and PersonaChat (Zhang et al., 2018). 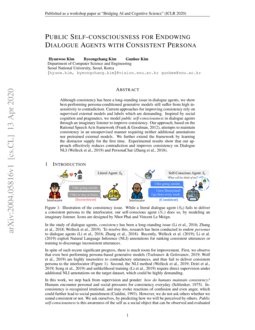 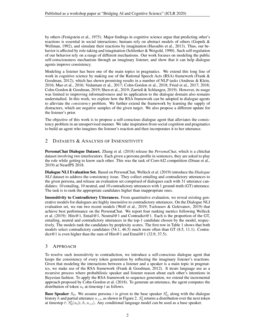 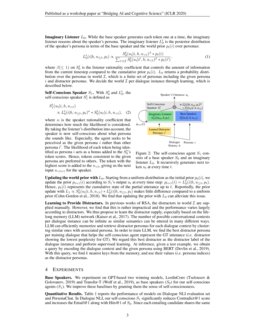 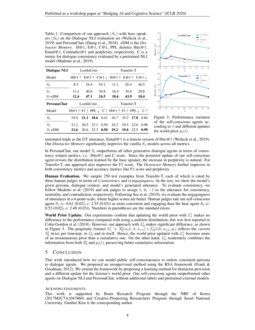 In spite of such recent significant progress, there is much room for improvement. First, we observe that even best performing persona-based generative models (Tselousov & Golovanov, 2019; Wolf et al., 2019) are highly insensitive to contradictory utterances, and thus fail to deliver consistent persona to the interlocutor (Figure 1). Second, the NLI method (Welleck et al., 2019; Dziri et al., 2019; Song et al., 2019) and unlikelihood training (Li et al., 2019) require direct supervision under additional NLI annotations on the target dataset, which could be highly demanding.

In this work, we step back from supervision and ponder: how do humans maintain consistency? Humans encounter personal and social pressures for consistency everyday (Schlenker, 1975). Inconsistency is recognized irrational, and may evoke reactions of confusion and even anger, which could further lead to social punishment (Cialdini, 1993). However, we do not ask others whether we sound consistent or not. We ask ourselves, by predicting how we will be perceived by others. Public self-consciousness is this awareness of the self as a social object that can be observed and evaluated by others (Fenigstein et al., 1975). Major findings in cognitive science argue that predicting other’s reactions is essential in social interactions; humans rely on abstract models of others (Gopnik & Wellman, 1992), and simulate their reactions by imagination (Hassabis et al., 2013). Thus, our behavior is affected by role-taking and imagination (Schlenker & Weigold, 1990). Such self-regulation of our behavior rely on a range of different mechanisms. Our work focuses on modeling the public self-consciousness mechanism through an imaginary listener, and show that it can help dialogue agents improve consistency.

Modeling a listener has been one of the main topics in pragmatics. We extend this long line of work in cognitive science by making use of the Rational Speech Acts (RSA) framework (Frank & Goodman, 2012), which has shown promising results in a number of NLP tasks (Andreas & Klein, 2016; Mao et al., 2016; Vedantam et al., 2017; Cohn-Gordon et al., 2018; Fried et al., 2017, 2018; Cohn-Gordon & Goodman, 2019; Shen et al., 2019; Zarrieß & Schlangen, 2019). However, its usage was limited to improving informativeness and its application to the dialogue domain also remains understudied. In this work, we explore how the RSA framework can be adopted in dialogue agents to alleviate the consistency problem. We further extend the framework by learning the supply of distractors, which are negative samples of the given target. We also propose a different update for the listener’s prior.

The objective of this work is to propose a self-conscious dialogue agent that alleviates the consistency problem in an unsupervised manner. We take inspiration from social cognition and pragmatics to build an agent who imagines the listener’s reaction and then incorporates it to her utterance.

PersonaChat Dialogue Dataset. Zhang et al. (2018) release the PersonaChat, which is a chitchat dataset involving two interlocutors. Each given a persona profile in sentences, they are asked to play the role while getting to know each other. This was the task of ConvAI2 competition (Dinan et al., 2019) at NeurIPS 2018.

Dialogue NLI Evaluation Set. Based on PersonaChat, Welleck et al. (2019) introduce the Dialogue NLI dataset to address the consistency issue. They collect entailing and contradictory utterances to the given persona, and release an evaluation set comprised of dialogues each with 31 utterance candidates: 10 entailing, 10 neutral, and 10 contradictory utterances with 1 ground-truth (GT) utterance. The task is to rank the appropriate candidates higher than inappropriate ones.

Insensitivity to Contradictory Utterances. From quantitative evaluation, we reveal existing generative models for dialogues are highly insensitive to contradictory utterances. On the Dialogue NLI evaluation set, we run two recent models (Wolf et al., 2019; Tselousov & Golovanov, 2019) that achieve best performance on the PersonaChat. We report four ranking metrics following Welleck et al. (2019): Hits@1, Entail@1, Neutral@1 and Contradict@1. Each is the proportion of the GT, entailing, neutral and contradictory utterances in the top-1 candidate chosen by the model, respectively. The models rank the candidates by perplexity scores. The first row in Table 3 shows that both models select contradictory candidates (54.1, 46.5) much more often than GT (8.5, 11.1). Contradict@1 is even higher than the sum of Hits@1 and Entail@1 (32.9, 37.5).

To resolve such insensitivity to contradiction, we introduce a self-conscious dialogue agent that keeps the consistency of every token generation by reflecting the imaginary listener’s reactions. Given that modeling the interactions between a listener and a speaker is a main topic in pragmatics, we make use of the RSA framework (Frank & Goodman, 2012). It treats language use as a recursive process where probabilistic speaker and listener reason about each other’s intentions in Bayesian fashion. To apply the RSA framework to sequence generation, we extend the incremental approach proposed by Cohn-Gordon et al. (2018). To generate an utterance, the agent computes the distribution of token ut at timestep t as follows.

Base Speaker S0. We assume persona i is given to the base speaker St0, along with the dialogue history h and partial utterance u<t, as shown in Figure 2. St0 returns a distribution over the next token at timestep t: St0(ut|i,h,u<t). Any conditional language model can be used as a base speaker.

where β(≤1) on St0 is the listener rationality coefficient that controls the amount of information from the current timestep compared to the cumulative prior pt(i). L0

returns a probability distribution over the personas in world

I, which is a finite set of personas including the given persona i and distractor personas. We decide the world I per dialogue instance through learning, which is described below.

Updating the world prior with L0.

Starting from a uniform distribution as the initial prior

p0(i), we update the prior pt+1(i) according to S1’s output ut at every time step: pt+1(i)=Lt0(i|h,u≤t,pt). Hence, pt(i) represents the cumulative state of the partial utterance up to t. Reportedly, the prior update with L1∝St0(ut|i,h,u<t)∗Lt0(i|h,u≤t,pt) makes little difference compared to a uniform prior (Cohn-Gordon et al., 2018). We find that updating the prior with L0 can alleviate this issue.

Learning to Provide Distractors. In previous works of RSA, the distractors in world I are supplied manually. However, we find that this is rather impractical and the performance varies largely according to distractors. We thus propose to learn the distractor supply, especially based on the life-long memory (LLM) network (Kaiser et al., 2017). The number of possible conversational contexts per dialogue instance can be infinite as similar semantics can be uttered in many different ways. LLM can efficiently memorize and retrieve distractor personas for each dialogue context by clustering similar ones with associated persona. In order to train LLM, we find the best distractor persona per training dialogue that helps the self-conscious agent represent the GT utterance (i.e

. distractor showing the lowest perplexity for GT). We regard this best distractor as the distractor label of the dialogue instance and perform supervised learning. At inference, given a test example, we obtain a query by encoding the dialogue context and the given persona using BERT

(Devlin et al., 2019). With this query, we find k nearest keys from the memory, and use their values (i.e. persona indices) as the distractor personas.

Base Speakers. We experiment on GPT-based two winning models, LostInConv (Tselousov & Golovanov, 2019) and Transfer-T (Wolf et al., 2019), as base speakers (S0) for our self-conscious agents (S1). We improve these baselines by granting them the sense of self-consciousness.

Quantitative Results. Table 3 reports the performance of models on Dialogue NLI evaluation set and PersonaChat. In Dialogue NLI, our self-conscious S1 significantly reduces Contradict@1 score and increases the Entail@1 along with Hits@1 of S0. Since each entailing candidate shares the same annotated triple as the GT utterance, Entail@1 is a lenient version of Hits@1 (Welleck et al., 2019). Our Distractor Memory significantly improves the vanilla S1 models across all metrics.

In PersonaChat, our model S1 outperforms all other generative dialogue agents in terms of consistency related metrics, i.e. Hits@1 and C score. Since the posterior update of our self-conscious agent revises the distribution learned by the base speaker, the increase in perplexity is natural. For Transfer-T, our approach also improves the F1 score. The Distractor Memory further improves in both consistency metrics and accuracy metrics like F1 score and perplexity.

Human Evaluation. We sample 250 test examples from Transfer-T, each of which is rated by three human judges in terms of (c)onsistency and (e)ngagingness. In the test, we show the model’s given persona, dialogue context, and model’s generated utterance. To evaluate consistency, we follow Madotto et al. (2019) and ask judges to assign 1, 0, −1 to the utterance for consistency, neutrality, and contradiction, respectively. Following See et al. (2019), we evaluate the engagingness of utterances in a 4-point scale, where higher scores are better. Human judges rate our self-conscious agent S1 (c: 0.61 (0.02), e: 2.55 (0.03)) as more consistent and engaging than the base agent S0 (c: 0.53 (0.02), e

World Prior Update. Our experiments confirm that updating the world prior with Lt1 makes no difference to the performance compared with using a uniform distribution; this was first reported in Cohn-Gordon et al. (2018). However, our approach with Lt0 makes significant difference, as shown in Figure 3. The pragmatic listener Lt1∝St0(ut|i,h,u<t)∗Lt0(i|h,u≤t,pt) reflects the current St0 twice per timestep; in Lt0 and in itself. Hence, the world prior updated with Lt1 becomes more of an instantaneous prior than a cumulative one. On the other hand, Lt0 moderately combines the information from both St0 and pt(i), preserving better cumulative information.

This work introduced how we can model public self-consciousness to endow consistent persona to dialogue agents. We proposed an unsupervised method using the RSA framework (Frank & Goodman, 2012). We extend the framework by proposing a learning method for distractor provision and a different update for the listener’s world prior. Our self-conscious agents outperformed other agents on Dialogue NLI and PersonaChat, without additional labels and pretrained external models.

This work is supported by Brain Research Program through the NRF of Korea (2017M3C7A1047860) and Creative-Pioneering Researchers Program through Seoul National University. Gunhee Kim is the corresponding author.