Training neural networks using limited annotations is an important problem in the medical domain. Deep Neural Networks (DNNs) typically require large, annotated datasets to achieve acceptable performance which, in the medical domain, are especially difficult to obtain as they require significant time from expert radiologists. Semi-supervised learning aims to overcome this problem by learning segmentations with very little annotated data, whilst exploiting large amounts of unlabelled data. However, the best-known technique, which utilises inferred pseudo-labels, is vulnerable to inaccurate pseudo-labels degrading the performance. We propose a framework based on superpixels - meaningful clusters of adjacent pixels - to improve the accuracy of the pseudo labels and address this issue. Our framework combines superpixels with semi-supervised learning, refining the pseudo-labels during training using the features and edges of the superpixel maps. This method is evaluated on a multimodal magnetic resonance imaging (MRI) dataset for the task of brain tumour region segmentation. Our method demonstrates improved performance over the standard semi-supervised pseudo-labelling baseline when there is a reduced annotator burden and only 5 annotated patients are available. We report DSC=0.824 and DSC=0.707 for the test set whole tumour and tumour core regions respectively. 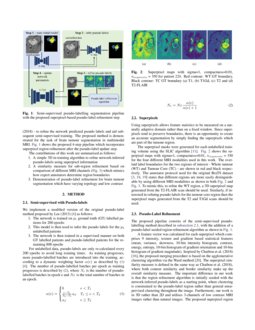 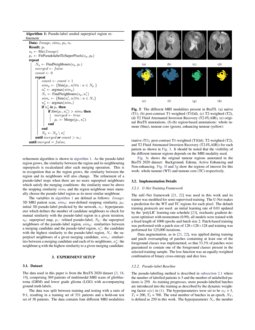 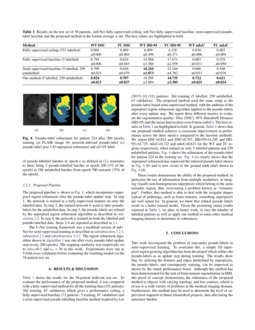 In medical imaging, segmentation of pathology helps clinicians to diagnose the severity of disease, make a recommendation for treatment and monitor the response to treatment over time [Suetens_1993, Hosny_2018]. However, training accurate medical imaging models requires vast amounts of expertly annotated data which can be challenging, time-consuming and prone to error and user bias, with annotation taking approximately 1 hour per patient for the 2020 Brain Tumour Segmentation dataset (BraTS 2020) [Brats_1]. Developing automatic segmentation tools trained with limited labelled data is a challenging task, especially in pathology segmentation where the object varies notably between patients and there is low contrast between the object and the background.

To overcome this problem, some previous works have suggested combining active contours, a classic unsupervised segmentation technique, with semi-supervised deep learning to refine the pseudo-labels inferred during semi-supervised training

[Ma2020]. The general idea is that the pseudo-labels provide the seed for region growing before using the updated pseudo labels for subsequent semi-supervised training. However, traditional boundary-based methods which may be used for region growing (e.g. active contours/snakes [chan_vese2001]) can be time consuming, with algorithms taking many iterations before convergence [book1], especially in 3D. To overcome this problem, region growing on the superpixel level rather than on the pixel level is proposed.

Superpixels are the result of iterative grouping of pixels into an irregular grid of regions that mould well to salient features and edges within the image [Achanta2012]. The most popular algorithm for generating superpixels is the Simple Linear Iterative Clustering (SLIC) algorithm [Achanta2012]

, which adapts a k-means clustering approach to generate superpixels. Although originally developed for natural images, SLIC has been shown to be effective in MRI

developed a superpixel region growing algorithm with a learned shape prior for segmenting individual eggs in microscopy images of Drosophila ovaries. However, in the case of pathology, such as brain tumour segmentation, a circular shape prior is not suitable as there is a large variance in topology and extent of disease between patients. Chaibou et al. (2018)

developed a strategy for unsupervised segmentation of natural images based on superpixel clustering. Superpixels to be merged are assumed to satisfy two important criteria: spatial adjacency and perceptual similarity. This suggests that an efficient approach should be able to pick the most visually similar spatial neighbour of the region of interest. They argue that taking advantage of the initial clustering performed by SLIC before further clustering of those superpixels into object regions allows more efficient semantic feature extraction compared to their pixel-level counterparts.

Another related work was presented by Wang et al. (2021) [Wang2021], where a filtering mechanism was developed to remove the pseudo-labels with the lowest confidence. The work presented in our paper takes a different approach and refines the predicted pseudo-labels, making them more robust rather than reducing the dataset size through filtering.

This paper presents a modified version of the pseudo label-based semi-supervised framework combined with a superpixel-based region growing algorithm - inspired by the work of Chaibou et al. (2018) - to refine the network predicted pseudo labels and aid subsequent semi-supervised training. The proposed method is demonstrated for the task of brain tumour segmentation in multimodal MRI. Fig.  1 shows the proposed 4-step pipeline which incorporates superpixel region refinement after the pseudo-label update step.

The contributions of this work are summarised as follows:

We implement a modified version of the original pseudo-label method proposed by Lee (2013) [Dong-HyunLee2013] as follows:

Using superpixels allows feature statistics to be measured on a naturally adaptive domain rather than on a fixed window. Since superpixels tend to preserve boundaries, there is an opportunity to create an accurate segmentation by simply finding the superpixels which are part of the tumour region.

The superpixel masks were generated for each unlabelled training volume using the SLIC algorithm [Achanta2012]. Fig.  2 shows the superpixel maps with sigma=1, compactness=0.01, nsegments = 350 for the four different MRI modalities used in this work. The overlaid label boundaries for the two regions of interest - Whole tumour (WT) and Tumour Core (TC) - are shown in red and black respectively. The annotator protocol used for the original BraTS dataset [Brats_1, Brats_2, Brats_3] states that different regions are more easily distinguishable by using different MRI modalities as shown in both Fig.  2 and Fig.  3. To mimic this, to refine the WT region, a 3D superpixel map generated from the T2-FLAIR scan should be used. Similarly, if interested in refining pseudo-labels for the tumour core region then the superpixel maps generated from the T2 and T1Gd scans should be used.

The proposed pipeline consists of the semi-supervised pseudo-labelling method described in subsection 2.1, with the addition of a pseudo-label seeded region refinement algorithm as shown in Fig.  1.

: hyperparameter which defines the number of candidate neighbours to check for mutual similarity with the pseudo-label region in a given iteration,

The data used in this paper is from the BraTS 2020 dataset [Brats_1, Brats_2, Brats_3], comprising 369 patients of multimodal MRI scans of glioblastoma (GBM) and lower grade glioma (LGG) with accompanying ground truth labels.

The data was split between training and testing with a ratio of 9:1, resulting in a training set of 331 patients and a hold-out test set of 38 patients. The data contains four different MRI modalities (native (T1), post-contrast T1-weighted (T1Gd), T2-weighted (T2), and T2 Fluid Attenuated Inversion Recovery (T2-FLAIR)) for each patient as shown in Fig.  3. It should be noted that the visibility of the different tumour regions depends on the MRI modality used.

The nnU-Net framework [nnUnet_1, nnUnet_2] was used in this work and its trainer was modified for semi-supervised training. The U-Net makes a prediction for the WT and TC regions for each pixel. The default training protocols are used: an initial learning rate of 0.01 updated by the ‘polyLR’ learning rate schedule [chen2017]

, stochastic gradient descent optimiser with momentum (0.99), all models were trained with a fixed length of 1000 epochs and batch size 2. Patch-based training was performed with a patch size of 128

The U-Net training framework was a modified version of nnU-Net for semi-supervised training as described in subsubsection 3.2.1, subsection 2.1 and subsubsection 3.2.2. The region refinement algorithm shown in algorithm 1 was run after every pseudo-label update step (every 200 epochs). The stopping similarity was empirically set to sim0=0.1 and nc = 30 in this work. Experiments were run as 5-fold cross-validation before evaluating the resulting models on the 38-patient test set.

Table 1 shows the results for the 38-patient hold-out test set. To evaluate the performance of the proposed method, it was compared with a fully-supervised method for all the training data (331 patients: 264 training, 67 validation) which gives a performance ceiling, a fully-supervised baseline (72 patients: 5 training, 67 validation) and a semi-supervised pseudo-labelling baseline method inspired by Lee (2013) [Dong-HyunLee2013] (331 patients: 264 training (5 labelled, 259 unlabelled, 67 validation). The proposed method used the same setup as the pseudo-label-based semi-supervised method, with the addition of the superpixel region refinement algorithm applied to the pseudo-labels after every update step. We report three different metrics to evaluate the segmentation quality: Dice (DSC), 95% Hausdorff Distance (HD-95) and the mean Intersection-over-Union (mIoU). The best results in Table 1 are highlighted in bold. In general, Table 1 shows that our proposed method achieves a consistent improvement in performance across the three metrics compared to the baseline methods. We report DSC=0.824 and DSC=0.707, HD-95=14.295 and HD-95=14.735, mIoU=0.722 and mIoU=0.621 for the WT and TC regions respectively, when trained on only 5 labelled patients and 259 unlabelled patients. Fig.  4 shows the refinement of the pseudo-label for patient 224 in the training set. Fig.  4 (c) clearly shows that the superpixel refinement has improved the inferred pseudo-label shown in Fig.  4 (b) and is now closer to the ground truth label shown in Fig.  4 (d).

These results demonstrate the ability of the proposed method, in particular the use of information from multiple modalities, in merging visually non-homogeneous superpixels which belong to the same semantic region, thus overcoming a problem known as “semantic gap”. Further, this method is able to deal with the irregular shapes typical of pathology, such as brain tumours, something superpixels are well suited for. In general, we show that refined pseudo labels result in a better trained model. Given the promising initial results reported in Table 1, we plan, in future work, to vary the number of labelled patients as well as apply our method to some other medical imaging datasets to determine its robustness.

This work investigated the problem of inaccurate pseudo-labels in semi-supervised learning. To overcome this, a simple 3D superpixel region growing algorithm has been developed which refines the pseudo-labels as an update step during training. The results show that, by utilising the features and edges predefined by superpixels, the pseudo-labels, and consequently training, can be improved as shown by the stated performance boost. Although this method has been demonstrated for the task of brain tumour segmentation in MRI, this proof of concept demonstrates the robustness of the proposed method to objects with varying topology and low contrast, which is of use to a wide variety of problems in the medical imaging domain. Furthermore, this method may be used to determine the level of supervision required in future biomedical projects, thus alleviating the annotator burden.

This research study was conducted retrospectively using human subject data made available in open access by the BraTS 2020 challenge. Ethical approval was not required as confirmed by the license attached with the open access data.