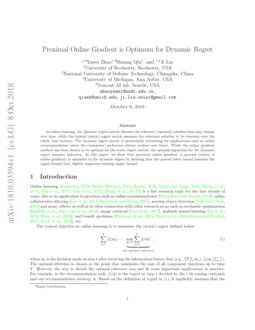 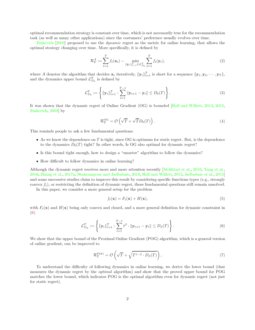 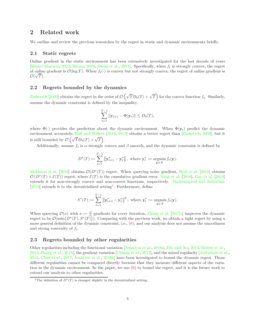 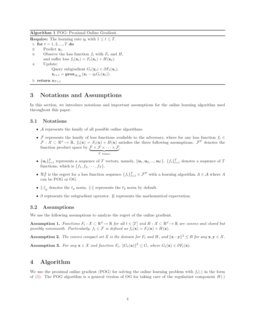 where xt is the decision made at step t after receiving the information before that (e.g., {∇fs(xs),fs(xs)}t−1s=1). The optimal reference is chosen at the point that minimizes the sum of all component functions up to time T. However, the way to decide the optimal reference may not fit some important applications in practice. For example, in the recommendation task, ft(x) is the regret at time t decided by the t-th coming customer and our recommendation strategy x. Based on the definition of regret in (1), it implicitly assumes that the optimal recommendation strategy is constant over time, which is not necessarily true for the recommendation task (as well as many other applications) since the costumers’ preference usually evolves over time.

Zinkevich (2003) proposed to use the dynamic regret as the metric for online learning, that allows the optimal strategy changing over time. More specifically, it is defined by

where A denotes the algorithm that decides xt iteratively, {yt}Tt=1 is short for a sequence {y1,y2,⋯,yT}, and the dynamics upper bound LTD0 is defined by

This reminds people to ask a few fundamental questions:

In this paper, we consider a more general setup for the problem

with Ft(x) and H(x) being only convex and closed, and a more general definition for dynamic constraint in (6)

We show that the upper bound of the Proximal Online Gradient (POG) algorithm, which is a general version of online gradient, can be improved to

We outline and review the previous researches by the regret in static and dynamic environments briefly.

2.2 Regrets bounded by other dynamics

Zinkevich (2003) obtains the regret in the order of O(√TD0(T)+√T) for the convex function ft. Similarly, assume the dynamic constraint is defined by the inequality,

Additionally, assume ft is α strongly convex and β smooth, and the dynamic constraint is defined by

When querying O(κ) with κ:=βα gradients for every iteration, Zhang et al. (2017a) improves the dynamic regret to be O(min{D∗(T),S∗(T)}). Comparing with the previous work, we obtain a tight regret by using a more general definition of the dynamic constraint, i.e., (6), and our analysis does not assume the smoothness and strong convexity of ft.

In this section, we introduce notations and important assumptions for the online learning algorithm used throughout this paper.

We use the following assumptions to analyze the regret of the online gradient.

The convex compact set X is the domain for Ft and H, and ∥x−y∥2≤R for any x,y∈X.

where the proximal operator is defined as

Therefore, the update of xt+1 is also equivalent to

In this section, we will first prove an upper bound for the regret based on our general dynamic constraints via proximal online gradient, which can also slightly to improve the existing upper bound. Then we present an lower bound which was not well studied in previous literature to our best knowledge. We will show that our proved upper bound matches the lower bound, implying the optimality of proximal online gradient algorithm.

Let 0≤β<1, and choose the positive learning rate sequence ηTt=1 in Algorithm 1 to be non-increasing, the following upper bound for the dynamic regret holds

To the make the dynamic regret more clear, we choose the learning rate appropriately, which leads to the following result

in Algorithm 1. We have

Once we obtain the upper bound for dynamic regret via POG, namely sup{ft}Tt=1∈FTR\textscPOGT, there still remains a question, whether our upper bound’s dependency on Dβ(T) and T is tight enough or even optimal.

Unfortunately, to our best knowledge, this question has not been fully investigated in any existing literature, even for the case of the dynamic regret defined with D0(T).

For any 0≤β<1, the lower bound for our problem with dynamic regret is

Theorem 2 shows that the lower bound matches with the upper bound in terms of the order of Dβ(T) and T. This theoretical result implies that the proximal online gradient is an optimal algorithm to find decisions in the dynamic environment defined by Dβ(T) and our upper bound is also sufficiently tight. In addition, this lower bound also reveals the difficulty of following dynamics in online learning.

In this section, we present the detailed proofs for the necessary lemmas and the theorems in our paper. In particular, Lemma 1 and Lemma 2 are for the proofs of Theorem 1 and Corollary 1. Lemma 3 is for the proof of Theorem 2.

In our proofs, we abuse the notations of ∂H(x) a little bit to represent any vector in the subgradient of H(x). Gt(x) still represents any vector in ∂Ft(x).

Given any sequence {yt}Tt=1∈LTDβ, and setting any ηt>0 in Algorithm 1, we have

It completes the proof. ∎

Given any sequence {yt}Tt=1∈LTDβ, and setting a non-increasing series 0<ηt+1≤ηt in Algorithm 1, we have

According to the law of cosines, we have

\textcircled1 holds due to (11). The proof is completed. ∎

For any sequence of T loss functions {ft}Tt=1∈FT, we have

According to Lemma 1, we have

\textcircled1 holds due to Lemma 2. Thus, we have

Since (12) holds for any sequence of loss functions {ft}Tt=1∈FT, thus,

It completes the proof. ∎

where σ1 is a constant, and does not depend on t. According to Theorem 1, when γ≥β,

Substituting it into (8), we have

\textcircled1 holds due to 0≤γ<1. Choosing the optimal σ1 with

It completes the proof.

Consider a sequence {vt}Tt=1. For any t∈[T], dimensions of vt∈{±1}d are i.i.d. sampled from Rademacher distribution. We have

We consider the left hand side

Consider the sequence {vt}Tt=1. If the event: +1 is picked happens m

times with the probability

Here, \textcircled1 holds due to