The focus of this article is on the detection and classification of patterns based on groupoids. The approach hinges on descriptive proximity of points in a set based on the neighborliness property. This approach lends support to image analysis and understanding and in studying nearness of image segments. A practical application of the approach is in terms of the analysis of natural images for pattern identification and classification. 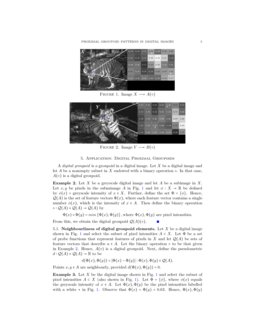 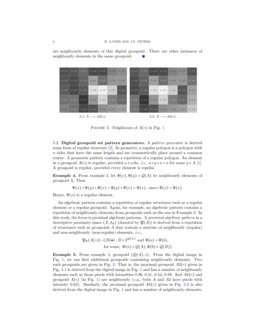 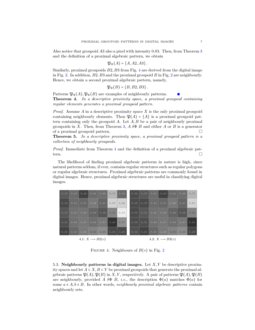 Due to the increasing availability and functionality of image editing to...
Ruiting Shao, et al. ∙

Food fraud has been an area of great concern due to its risk to public h...
João J. de Macedo Neto, et al. ∙

Some enumerations of binary digital images

The topology of digital images has been studied much in recent years, bu...
P. Christopher Staecker, et al. ∙

Camera identification by grouping images from database, based on shared noise patterns

Studying the behavior of crowds is vital for understanding and predictin...
Stijn Heldens, et al. ∙

The focus of this paper is on groupoids in proximity spaces, which is an outgrowth of recent research [14]. A groupoid is a system S(∘) consisting of a nonempty set S together with a binary operation ∘ on S. A binary operation ∘:S×S→S maps S×S into S, where S×S

is the set of all ordered pairs of elements of

In proximity spaces, groupoids provide a natural structuring of sets of points. For a proximity space X, the structuring of X results from a proximity relation on X. Nonempty subsets A of X are further structured as a result of binary operations ∘ on A, yielding a groupoid denoted by (A,∘). These operations often lead to descriptions of the sets endowed for structures with potential applications in proximity spaces for pattern description, recognition and identification. In this work, the applications of descriptive proximity-based groupoids in digital image analysis is explored. A practical application of the proposed approach is in terms of the analysis of natural images for pattern identification and classification.

In a Kovár discrete space, a non-abstract point has a location and features that can be measured [4, §3]. Let X be a nonempty set of non-abstract points in a proximal relator space (X,Rδ) and let Φ={ϕ1,…,ϕn} a set of probe functions that represent features of each x∈X. For example, leads to a proximal view of sets of picture points in digital images [10]. A probe function Φ:X→R represents a feature of a sample point in a picture. Let Φ(x)=(ϕ1(x),…,ϕn(x)) denote a feature vector for x, which provides a description of each x∈X. To obtain a descriptive proximity relation (denoted by δΦ), one first chooses a set of probe functions. Let A,B∈2X and Q(A),Q(B) denote sets of descriptions of points in A,B, respectively. For example, Q(A)={Φ(a):a∈A}. Let X be a nonempty set. A Lodato proximity δ is a relation on P(X) which satisfies the following axioms for all subsets A,B,C of X:

Descriptive Lodato proximity was introduced in [11]. Let X be a nonempty set, A,B⊂X,x∈X. Recall that Φ(x) is a feature vector that describes x, Φ(A) is the set of feature vectors that describe points in A. The descriptive intersection between A and B (denoted by A ∩Φ B) is defined by

i.e., cl(A) is the set of all points x in X that are close to A (D(x,A) is the Hausdorff distance [3, §22, p. 128] between x and the set A and d(x,a)=|x−a| (standard distance)). Subsets A,B∈2X are spatially near (denoted by A δ B), provided the intersection of closure of A and the closure of B is nonempty, i.e., cl(A)∩cl(B)≠∅. That is, nonempty sets are spatially near, provided the sets have at least one point in common.

The pair (X,δ) is called an EF-proximity space. In a proximity space X, the closure of A in X coincides with the intersection of all closed sets that contain A.

[16] The closure of any set A in the proximity space X is the set of points x∈X that are close to A.

The closure of any set A in the proximity space X is the set of points x∈X such that x δ A.

The descriptive intersection ∩Φ of A and B is defined by

The descriptive proximity relation δΦ is defined by

The description closure of any set A in the descriptive proximity space X is the set of points x∈X such that x δΦ A.

In general, given a finite groupoid A(∘) represented by an undirected graph, for x,y∈A let x∼y denote the fact that x,y are neighbours. In particular, given a finite descriptive proximal groupoid A(∘Φ), for Φ(x),Φ(y)∈Q(A), let Φ(x)∼Φ(y) denote the fact that Φ(x),Φ(y) are neighbours, i.e., points x,y∈A have matching descriptions.

Let (X,δΦ) be a descriptive proximity space. Then let {Φ(x)} denote an equivalence class represented by the feature vector Φ(x) that describes x∈X. Then Φ(y)∈{Φ(x)}, provided Φ(y)=Φ(x), i.e., x,y∈X have matching descriptions. Then, for example, define the descriptive groupoid A(∘Φ) such that

Let (X,δΦ),(Y,δΦ) be descriptive proximity spaces, A⊂X,B⊂Y. If groupoids A(∘Φ),B(∙Φ) are neighbourly, then A δΦ B.

Immediate from the definition of descriptive near sets [10]. ∎

Let X be a greyscale digital image and let A be a subimage in X. Let x,y be pixels in the submimage A in Fig. 1 and let ϕ:X→R be defined by ϕ(x)= greyscale intensity of x∈X. Further, define the set Φ={ϕ}. Hence, Q(A) is the set of feature vectors Φ(x), where each feature vector contains a single number ϕ(x), which is the intensity of x∈A. Then define the binary operation ∘:Q(A)×Q(A)→Q(A) by

Let X be a digital image shown in Fig. 1 and select the subset of pixel intensities A⊂X. Let Φ be a set of probe functions that represent features of pixels in X and let Q(A) be sets of feature vectors that describe a∈A. Let the binary operation ∘ to be that given in Example 2. Hence, A(∘) is a digital groupoid. Next, define the pseudometric d:Q(A)×Q(A)→R to be

Let X be the digital image shown in Fig. 1 and select the subset of pixel intensities A⊂X (also shown in Fig. 1). Let Φ={ϕ}, where ϕ(x) equals the greyscale intensity of x∈A. Let Φ(x),Φ(y) be the pixel intensities labelled with a white ⋆ in Fig. 1. Observe that Φ(x)=Φ(y)=0.63. Hence, Φ(x),Φ(y) are neighbourly elements of this digital groupoid. There are other instances of neighbourly elements in the same groupoid.   ■

A pattern generator is derived some form of regular structure [2]. In geometry, a regular polygon is a polygon with n sides that have the same length and are symmetrically place around a common center. A geometric pattern contains a repetition of a regular polygon. An element in a groupoid A(∘) is regular, provided a∈aAa, i.e., a∘y∘a=a for some y∈A [1]. A groupoid is regular, provided every element is regular.

From example 3, let Φ(x),Φ(y)∈Q(A) be neighbourly elements of groupoid A. Then

Hence, Φ(x) is a regular element.

Similarly, proximal groupoids B2,B3 from Fig. 4 are derived from the digital image in Fig. 2. In addition, B2,B3 and the proximal groupoid B in Fig. 2 are neighbourly. Hence, we obtain a second proximal algebraic pattern, namely,

In a descriptive proximity space, a proximal groupoid pattern is a collection of neighbourly groupoids.

Immediate from Theorem 4 and the definition of a proximal algebraic pattern. ∎

In the search for neighbourly patterns in digital images X,Y, a proximal algebraic pattern PY(B) in Y is salient (important) relative to a proximal algebraic pattern PX(A) in X, provided the number of neighbourly elements a∈A,b∈B is high enough. A digital image Y belongs to the class of images represented by X, if Y contains a salient pattern that is neighbourly with a pattern in X. In that case, images X,Y are well-classified.

Let (X,δΦ),(Y,δΦ) be descriptive proximity spaces and let A⊂X,B⊂Y generate neighbourly patterns PΦ(clA),PΦ(clB). If every b∈B is neighbourly with some a∈A, then PΦ(clB) is a salient proximal algebraic pattern.

Immediate from the definition of a salient proximal algebraic pattern. ∎