In this work we present novel provably accelerated gossip algorithms for solving the average consensus problem. The proposed protocols are inspired from the recently developed accelerated variants of the randomized Kaczmarz method - a popular method for solving linear systems. In each gossip iteration all nodes of the network update their values but only a pair of them exchange their private information. Numerical experiments on popular wireless sensor networks showing the benefits of our protocols are also presented. 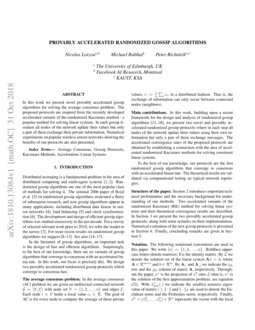 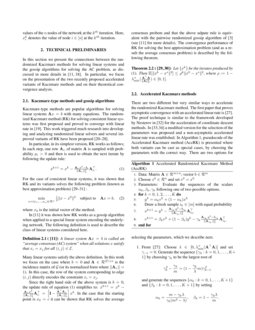 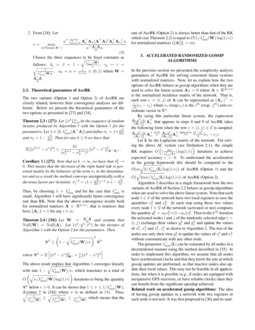 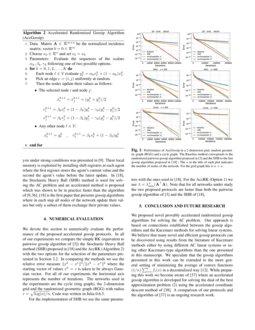 In this paper we show how the stochastic heavy ball method (SHB) -- a po...
Nicolas Loizou, et al. ∙

In this work we present a new framework for the analysis and design of r...
Nicolas Loizou, et al. ∙

In this work we present a randomized gossip algorithm for solving the av...
Filip Hanzely, et al. ∙

Paving the Way for Consensus: Convergence of Block Gossip Algorithms

We revisit the problem of inferring the overall ranking among entities i...
Vivek S. Borkar, et al. ∙

In the literature of gossip algorithms, an important task is the design of fast and efficient algorithms. Surprisingly, to the best of our knowledge, there are no variants of gossip algorithms that converge to consensus with an accelerated linear rate. In this work, our focus is precisely this. We design two provably accelerated randomized gossip protocols which converge to consensus fast.

The average consensus problem. In the average consensus (AC) problem we are given an undirected connected network G=(V,E) with node set V={1,2,…,n} and edges E. Each node i∈V holds a local value ci∈R. The goal of AC is for every node to compute the average of these private values, ¯c:=1n∑ici, in a distributed fashion. That is, the exchange of information can only occur between connected nodes (neighbors).

Main contributions. In this work, building upon a recent framework for the design and analysis of randomized gossip algorithms [11, 18], we present two novel and provably accelerated randomized gossip protocols where in each step all nodes of the network update their values using their own information but only a pair of them exchange messages. The accelerated convergence rates of the proposed protocols are obtained by establishing a connection with the area of accelerated randomized Kaczmarz methods for solving consistent linear systems.

To the best of our knowledge, our protocols are the first randomized gossip algorithms that converge to consensus with an accelerated linear rate. The theoretical results are validated via computational testing on typical network topologies.

Structure of the paper. Section 2 introduces important technical preliminaries and the necessary background for understanding of our methods. Two accelerated variants of the randomized Kaczmarz (RK) method for solving linear systems and their theoretical convergence results are described. In Section 3 we present the two provably accelerated gossip protocols, along with some remarks on their implementation. Numerical evaluation of the new gossip protocols is presented in Section 4. Finally, concluding remarks are given in Section 5.

Notation. The following notational conventions are used in this paper. We write [n]:={1,2,…,n}. Boldface upper-case letters denote matrices; I

is the identity matrix. By

L we denote the solution set of the linear system Ax=b, where A∈Rm×n and b∈Rm. By Ai: and A:j we indicate the ith row and the jth column of matrix A, respectively. Throughout the paper, x∗ is the projection of x0 onto L (that is, x∗ is the solution of the best approximation problem; see equation (2)). With λ+min(⋅)

we indicate the smallest nonzero eigenvalue of matrix

(⋅). ∥⋅∥ and ∥⋅∥F are used to denote the Euclidean norm and the Frobenius norm, respectively. Finally, xk=(xk1,…,xkn)∈Rn

represents the vector with the local values of the

In this section we present the connections between the randomized Kaczmarz methods for solving linear systems and the gossip algorithms for solving the AC problem, as discussed in more details in [11, 18]. In particular, we focus on the presentation of the two recently proposed accelerated variants of Kaczmarz methods and on their theoretical convergence analysis.

Kaczmarz-type methods are popular algorithms for solving linear systems Ax=b with many equations. The randomized Kaczmarz method (RK) for solving consistent linear systems was first proposed and proved to converge with linear rate in [19]. This work triggered much research into developing and analyzing randomized linear solvers and several improved variants of RK have been proposed [20, 21, 22, 23, 24, 25, 26, 27, 28].

In particular, in its simplest version, RK works as follows; In each step, one row Ai: of matrix A

is sampled with probability

pi>0 and then is used to obtain the next iterate by following the update rule:

For the case of consistent linear systems, it was shown that RK and its variants solves the following problem (known as best approximation problem) [29, 30, 31] :

where x0 is the initial vector of the method.

In [11] it was shown how RK works as a gossip algorithm when applied to a special linear system encoding the underlying network. The following definition is used to describe the class of linear systems considered here.

A linear system Ax=b is called an “average consensus (AC) system” when all solutions x satisfy that xi=xj for all (i,j)∈E.

Many linear systems satisfy the above definition. In this work we focus on the case where b=0 and A∈R|E|×n is the incidence matrix of G (or its normalized form where ∥Ai:∥=1). In this case, the row of the system corresponding to edge (i,j) directly encodes the constraint xi=xj.

Since the right hand side of the above system is b=0, the update rule of equation (1) simplifies to: In the case that the starting point is x0=c it can be shown that RK solves the average consensus probem and that the above udpate rule is equivalent with the pairwise randomized gossip algorithm of [3] (see [11] for more details). The convergence performance of RK for solving the best approximation problem (and as a result the average consensus problem) is described by the following theorem.

There are two different but very similar ways to accelerate the randomized Kaczmarz method. The first paper that proves asymptotic convergence with an accelerated linear rate is [27]. The proof technique is similar to the framework developed by Nesterov in [32] for the acceleration of coordinate descent methods. In [33, 34] a modified version for the selection of the parameters was proposed and a non-asymptotic accelerated linear rate was established. In Algorithm 1, pseudocode of the Accelerated Kaczmarz method (AccRK) is presented where both variants can be cast as special cases, by choosing the parameters with the correct way.

There are two options for selecting the parameters, which we describe next.

The two variants (Option 1 and Option 2) of AccRK are closely related, however their convergence analyses are different. Below we present the theoretical guarantees of the two options as presented in [27] and [34].

Note that as k→∞, we have that σk2→0. This means that the decrease of the right hand side is governed mainly by the behavior of the term σ1 in the denominator and as a result the method converge asymptotically with a decrease factor per iteration: σ−21=(1+√λ2m)−2≈1−√λm.

Thus, by choosing λ=λ+min and for the case that λ+min is small, Algorithm 1 will have significantly faster convergence rate than RK. Note that the above convergence results hold for normalized matrices A∈Rm×n, that is matrices that have ∥Ai:∥=1 for any i∈m.

Let W=A⊤Am and assume that Null(W)=Null(A). Let {xk,yk,vk} be the iterates of Algorithm 1 with the Option 2 for the parameters. Then

In the previous section we presented the complexity analysis guarantees of AccRK for solving consistent linear systems with normalized matrices. Now, let us explain how the two options of AccRK behave as gossip algorithms when they are used to solve the linear system Ax=0 where A∈R|E|×n is the normalized incidence matrix of the network. That is, each row e=(i,j) of A can be represented as (Ae:)⊤=1√2(ei−ej) where ei (resp.ej) is the ith (resp. jth) unit coordinate vector in Rn.

By using this particular linear system, the expression Ai:yk−bi∥Ai:∥22A⊤i: that appears in steps 8 and 9 of AccRK takes the following form when the row e=(i,j)∈E is sampled: Ae:yk−bi∥Ae:∥22A⊤e:b=0=Ae:yk∥Ae:∥22A⊤e:form of A=yki−ykj2(ei−ej).

Algorithm 2 describes in a single framework how the two variants of AccRK of Section 2.2 behave as gossip algorithms when are used to solve the above linear system. Note that each node ℓ∈V of the network have two local registers to save the quantities vkℓ and xkℓ. In each step using these two values every node ℓ∈V of the network (activated or not) computes the quantity ykℓ=αkvkℓ+(1−αk)xkℓ. Then in the kth iteration the activated nodes i and j of the randomly selected edge e=(i,j) exchange their values yki and ykj and update the values of xki, xkj and vki, vkj as shown in Algorithm 2. The rest of the nodes use only their own ykℓ to update the values of vki and xki without communicate with any other node.

[35]. In order to implement this algorithm, we assume that all nodes have synchronized clocks and that they know the rate at which gossip updates are performed, so that inactive nodes also update their local values. This may not be feasible in all applications, but when it is possible (e.g., if nodes are equipped with inexpensive GPS receivers, or have reliable clocks) then they can benefit from the significant speedup achieved.

Related work on accelerated gossip algorithms: The idea of having gossip updates in a network with two registers in each node is not new. It was first proposed in [36] and its analysis under strong conditions was presented in [9]. There local memory is exploited by installing shift registers at each agent where the first register stores the agent’s current value and the second the agent’s value before the latest update. In [18], the Stochastic Heavy Ball (SHB) method is used for solving the AC problem and an accelerated method is proposed which was shown to be in practice faster than the algorithm of [36, 9]. [18] is the first paper that presents gossip algorithms where in each step all nodes of the network update their values but only a subset of them exchange their private values.

We devote this section to numerically evaluate the performance of the proposed accelerated gossip protocols. In all of our experiments we compare the simple RK (equivalent to pairwise gossip algorithm of [3]) the Stochastic Heavy Ball method (SHB) proposed in [18] and the AccRK (Algorithm 2) with the two options for the selection of the parameters presented in Section 2.2. In comparing the methods we use the relative error measure ∥xk−x∗∥2/∥x0−x∗∥2 where the starting vector of values x0=c is taken to be always Gaussian vector. For all of our experiments the horizontal axis represents the number of iterations. The networks used in the experiments are the cycle (ring graph), the 2-dimension grid and the randomized geometric graph (RGG) with radius r=√log(n)/n. Code was written in Julia 0.6.3.

For the implementation of SHB we use the same parameters with the ones used in [18]. For the AccRK (Option 1) we use λ=λ+min(A⊤A). Note that for all networks under study the two proposed protocols are faster than both the pairwise gossip algorithm of [3] and the SHB of [18].

We proposed novel provably accelerated randomized gossip algorithms for solving the AC problem. Our approach is based on connections established between the gossip algorithms and the Kaczmarz methods for solving linear systems. We believe that many novel and efficient gossip protocols can be discovered using results from the literature of Kaczmarz methods either by using different AC linear systems or using other Kaczmarz-type algorithms than the one presented in this manuscript. We speculate that the gossip algorithms presented in this work can be extended to the more general setting of minimizing the average of convex functions (1/n)∑ni=1fi(x) in a decentralized way [12]. While preparing this work we become aware of [37] where an accelerated gossip algorithm is developed for solving the dual of the best approximation problem (2) using the accelerated coordinate descent method of [38]. A comparison of our protocols and the algorithm of [37] is an ongoing research work.