Propriety of the reference posterior distribution in Gaussian Process regression 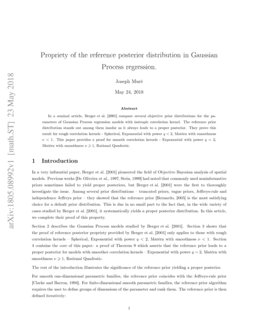 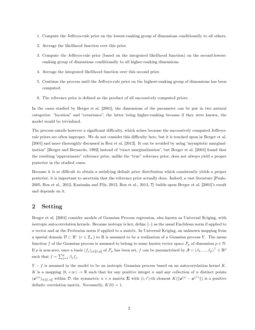 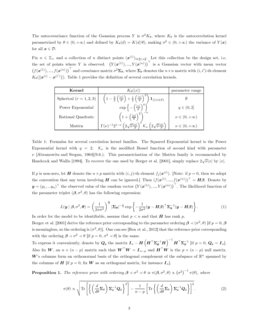 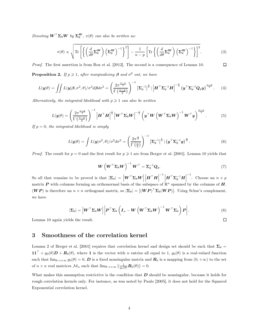 In a very influential paper, BDOS01 pioneered the field of Objective Bayesian analysis of spatial models. Previous works [DOKS97, Ste99] had noted that commonly used noninformative priors sometimes failed to yield proper posteriors, but BDOS01 were the first to thoroughly investigate the issue. Among several prior distributions – truncated priors, vague priors, Jeffreys-rule and independence Jeffreys prior – they showed that the reference prior [Ber05] is the most satisfying choice for a default prior distribution. This is due in no small part to the fact that, in the wide variety of cases studied by BDOS01, it systematically yields a proper posterior distribution. In this article, we complete their proof of this property.

Section 2 describes the Gaussian Process models studied by BDOS01. Section 3 shows that the proof of reference posterior propriety provided by BDOS01 only applies to those with rough correlation kernels – Spherical, Exponential with power q<2, Matérn with smoothness ν<1. Section 4 contains the core of this paper: a proof of Theorem 9 which asserts that the reference prior leads to a proper posterior for models with smoother correlation kernels – Exponential with power q=2, Matérn with smoothness ν⩾1, Rational Quadratic.

The rest of the introduction illustrates the significance of the reference prior yielding a proper posterior.

In the cases studied by BDOS01, the dimensions of the parameter can be put in two natural categories: “location” and “covariance”, the latter being higher-ranking because if they were known, the model would be trivialized.

The process entails however a significant difficulty, which arises because the successively computed Jeffreys-rule priors are often improper. We do not consider this difficulty here, but it is touched upon in BDOS01 and more thoroughly discussed in RSH12. It can be avoided by using “asymptotic marginalization” [BB92] instead of “exact marginalization”, but BDOS01 found that the resulting “approximate” reference prior, unlike the “true” reference prior, does not always yield a proper posterior in the studied cases.

Because it is so difficult to obtain a satisfying default prior distribution which consistently yields a proper posterior, it is important to ascertain that the reference prior actually does. Indeed, a vast literature [paulo05, RSH12, KP12, RSS13, GWB18] builds upon BDOS01’s result and depends on it.

Y−f is assumed in the model to be an isotropic Gaussian process based on an autocorrelation kernel K. K is a mapping [0,+∞)→R such that for any positive integer n and any collection of n distinct points (x(i))i∈[[1,n]] within D, the symmetric n×n matrix Σ with (i,i′)-th element K(∥x(i)−x(i′)∥) is a positive definite correlation matrix. Necessarily, K(0)=1.

The autocovariance function of the Gaussian process Y is σ2Kθ, where Kθ is the autocorrelation kernel parametrized by θ∈(0,+∞) and defined by Kθ(d)=K(d/θ), making σ2∈(0,+∞)

In order for the model to be identifiable, assume that p<n and that H has rank p.

To express it conveniently, denote by Qθ the matrix In−H(H⊤Σ−1θH)−1H⊤Σ−1θ [if p=0, Qθ=In]. Also fix W, an n×(n−p) matrix such that W⊤W=In−p and H⊤W is the p×(n−p) null matrix. W’s columns form an orthonormal basis of the orthogonal complement of the subspace of Rn spanned by the columns of H [if p=0, fix W

as an orthogonal matrix, for instance

Denoting W⊤ΣθW by ΣWθ, π(θ) can also be written as:

The first assertion is from RSH12. The second is a consequence of Lemma 10. ∎

If p⩾1, after marginalizing β and σ2 out, we have

Alternatively, the integrated likelihood with p⩾1 can also be written

If p=0, the integrated likelihood is simply

So all that remains to be proved is that |Σθ|=∣∣W⊤ΣθW∣∣∣∣H⊤H∣∣−1∣∣H⊤Σ−1θH∣∣−1. Choose an n×p matrix P with columns forming an orthonormal basis of the subspace of Rn spanned by the columns of H. (WP) is therefore an n×n orthogonal matrix, so |Σθ|=∣∣(WP)⊤Σθ(WP)∣∣. Using Schur’s complement, we have

3 Smoothness of the correlation kernel

What makes this assumption restrictive is the condition that D should be nonsingular, because it holds for rough correlation kernels only. For instance, as was noted by paulo05, it does not hold for the Squared Exponential correlation kernel.

For a given correlation kernel K, D is typically a matrix proportional to the matrix with entries ∥∥x(i)−x(j)∥∥q, where q depends on the smoothness of the correlation kernel but should in any case belong to the interval (0,2]. This is because K(s)−K(0) is equivalent to a constant times sq when s→0+.

Sch37 gives the following result (Theorem 4 in the original paper):

If q∈(0,2), the quadratic form ξ∈Rn↦∑ni,j=0∥∥x(i)−x(j)∥∥qξiξj is nonsingular and its canonical representation contains one positive and n negative squares.

This means that if the correlation kernel is rough enough to have q∈(0,2), the assumption that D is nonsingular is reasonable.

is nonsingular and has one positive eigenvalue and

The picture is dramatically different when the correlation kernel K is smooth enough to have q=2. This happens as soon as K is twice continuously differentiable. Gow85’s Theorem 6 implies the following results:

If d is the dimension of Ed, the smallest Euclidean subspace containing all points in the design set, then the n×n matrix with entries ∥∥x(i)−x(j)∥∥2 has rank:

The n×n matrix with entries ∥∥x(i)−x(j)∥∥2 has rank lower or equal to r+2.

For all practical purposes, n is much greater than r, so the matrix D is singular when q=2.

The above review justifies the claim in the abstract that the Squared Exponential kernel, Matérn kernels with smoothness ν⩾1 and Rational Quadratic kernels require a proof of the reference posterior’s propriety.

4 Propriety of the reference posterior distribution

BDOS01 show that the reference posterior distribution on β and σ2 conditionally to θ is proper.

In this section, we prove that the joint reference posterior distribution is proper for Matérn kernels with smoothness ν⩾1, Rational Quadratic kernels and the Squared Exponential kernel.

For Matérn kernels with smoothness ν⩾1, for Rational Quadratic kernels with parameter ν>0 and for the Squared Exponential kernel, the “marginal” reference prior distribution π(θ) defined by Proposition 1 has the following behavior.

Denoting any of these kernels by K, K is continuously differentiable.

Moreover, Σθ converges to In when θ→0, so its inverse does too. The first assertion follows from these facts.

The second assertion is proved by combining Lemma 12 with Lemma 20/21/22 for Matérn, Rational Quadratic and Squared Exponential kernels respectively. ∎

, there exists a hyperplane

The proof of this lemma can be found in Appendix D. Combined with Equation (5), it implies that if the observation vector y belongs to Rn∖H, then

In the following, when y belongs to Rn∖H, we write that “y looks nondegenerate”. This terminology relies on the intuition that if the observation were to take some values within H, it would be better explained by a degenerate Gaussian model. The most compelling example is that of a constant observation vector, for which the Kriging model would be grossly inappropriate.

For Matérn kernels with noninteger smoothness ν>1, for Rational Quadratic kernels and for the Squared Exponential kernel, regardless of the design set and of the mean function space, if y looks nondegenerate, then the reference posterior distribution π(θ|y) is proper.

All that remains to be proved is therefore that the reference posterior is integrable in the neighborhood of +∞. In the following θ→+∞, so we rely on the asymptotic expansion of Σθ, which is detailed in Appendix D.

The proof is somewhat trickier for Matérn kernels with integer smoothness, so we tackle this case at the end. Until further notice, assume the kernel is Rational Quadratic, Squared Exponential or Matérn with noninteger smoothness ν>1.

Lemma 15 implies that one of the following is true:

We can show that ∥∥ddθRg(θ)∥∥=o(g⋆′(θ)). This is due to Equation (72) for Rational Quadratic and Squared Exponential kernels, and to Equation (75) for Matérn kernels with noninteger smoothness.

A specific asymptotic analysis is required in each case. This study is conducted in Appendix

E. We summarize the results in Table 3.

The posterior distribution resulting from the reference prior is proper in all cases.

Matérn kernels with integer smoothness are dealt with in Appendix E.2.

The main result of this work is Theorem 9, which ensures that the reference prior leads to a proper posterior distribution for a large class of smooth kernels. This class contains the Squared Exponential correlation kernel as well as the important Matérn family [Ste99] with smoothness parameter ν⩾1. Rational Quadratic kernels, whose usage is less widespread are also included within this class.

BDOS01 proved this result for a class of rough correlation kernels. This class includes the complementary set of the Matérn family – kernels with smoothness parameter ν<1 – as well as all other Power Exponential kernels. Spherical kernels, which are mostly used in the field of geostatistics also belong to this class.

Combining Theorem 9 with the results from BDOS01, one can appreciate how polyvalent the reference prior is, insofar as it is able to adapt to very different correlation kernels and always leads to a proper posterior. No ad-hoc technique is required to derive useable inference, so this approach seems to be flawless from a Bayesian point of view when no explicit prior information is available. Even when explicit prior information is available, following DM07

, it can be used to derive Maximum A Posteriori (MAP) estimates or High Probability Density (HPD) sets that are invariant under reparametrization.

Let a and b be positive integers and let Σ be a nonsingular symmetric (a+b)×(a+b) matrix. Then, for any (a+b)×a matrix A with rank a and any (a+b)×b matrix B with rank b such that A⊤B is the null a×b matrix,

Notice that both matrices have the same kernel, namely the subspace of Ra+b spanned by A. Indeed, because B has full column rank and (B⊤ΣB)−1 is nonsingular, the left matrix has the same kernel as B⊤. Besides, the a-dimensional subspace of Ra+b spanned by A in included in this kernel. So because the rank of B⊤ is b, its kernel has dimension a and the inclusion is an equality.

So both matrices act the same way on the subspace spanned by ΣB, which is supplementary to their common kernel, hence the equality. ∎

Let m be a positive integer, Σ be a nonsingular m×m matrix, and A and B be m×m matrices. If there exists a real number t such that

The lemma follows from a direct calculation:

A: A=USV⊤. In this decomposition, U and V are orthogonal matrices of size m×m and a×a respectively, and S is an m×a matrix whose only non-null entries are on the main diagonal. Therefore the last m−a rows of S are filled with zeros. So define B as the m×(m−a) matrix formed by the last m−a columns of U.

Because of the properties of the trace, this implies

Combining the 5 equations above yields

An elementary computation shows that Σ−1Q=Q⊤Σ−1Q.

The inequality holds because L−1QFQ⊤(L−1)⊤ is a symmetric positive semi-definite matrix.

be a basis of unit eigenvectors of

Denoting by (si)1⩽i⩽m the family of the eigenvalues corresponding to the family of eigenvectors (ξi)1⩽i⩽m, we have for every integer i∈[[1,m−a]] si≠0 and

This implies the third equality below:

The lemmas in this subsection deal with the following setting.

Let m be a positive integer and let M be a continuous mapping from R to Mm, the set of m×m matrices. Assume M admits the following Maclaurin series:

In the above expression, N is a nonnegative integer and for every k∈[[0,N]]:

Assume that ∩Nk=0KerAk is the trivial vector space and that there exists T>0 such that for all t∈(−T,T), M(t) is a nonsingular matrix.

If N=0, then A0 is nonsingular and the conclusion is trivial.

If N⩾1, we may assume without loss of generality that ∩N−1k=0KerAk is a nontrivial vector space, otherwise we could replace N by N−1 and B(t) by {aN(t)AN+B(t)} for all t∈R.