In the last couple of decades, there has been major advancements in the domain of missing data imputation. The techniques in the domain include amongst others: Expectation Maximization, Neural Networks with Evolutionary Algorithms or optimization techniques and K-Nearest Neighbor approaches to solve the problem. The presence of missing data entries in databases render the tasks of decision-making and data analysis nontrivial. As a result this area has attracted a lot of research interest with the aim being to yield accurate and time efficient and sensitive missing data imputation techniques especially when time sensitive applications are concerned like power plants and winding processes. In this article, considering arbitrary and monotone missing data patterns, we hypothesize that the use of deep neural networks built using autoencoders and denoising autoencoders in conjunction with genetic algorithms, swarm intelligence and maximum likelihood estimator methods as novel data imputation techniques will lead to better imputed values than existing techniques. Also considered are the missing at random, missing completely at random and missing not at random missing data mechanisms. We also intend to use fuzzy logic in tandem with deep neural networks to perform the missing data imputation tasks, as well as different building blocks for the deep neural networks like Stacked Restricted Boltzmann Machines and Deep Belief Networks to test our hypothesis. The motivation behind this article is the need for missing data imputation techniques that lead to better imputed values than existing methods with higher accuracies and lower errors. 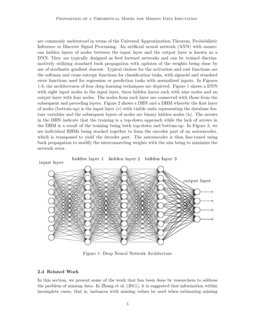 Decision-making and data analysis tasks are made nontrivial by the presence of missing data in a database. The decisions made by decision makers are likely to be more accurate and reliable with complete datasets than with incomplete datasets containing missing data entries. Also, data analysis and data mining tasks yield more representative results and statistics when all the required data is available. As a result, there has been a lot of research interest in the domain of missing data imputation with researchers developing novel techniques to perform this task accurately and in a reasonable amount of time due to the time sensitive nature of some real life applications [Aydilek and Arslan (2012), Rana et al. (2015), Koko et al. (2015), Mistry et al. (2009), Nelwamondo et al. (2007), Leke et al. (2014), Mohamed et al. (2007), Abdella and Marwala (2005), Zhang et al. (2011) and Zhang (2011)]. Applications such as in medicine, manufacturing or energy that use sensors in instruments to report vital information that makes time sensitive decisions, may fail when there are missing data in the database. In such cases, it is very important to have a system capable of imputing the missing data from the failed sensors with high accuracy as quickly as possible. The imputation procedure in such cases requires the approximation of the missing value taking into account the interrelationships that exist between the values of other sensors in the system. There are several reasons that could lead to data being missing in a dataset. These could be as a result of data entry errors or respondents not answering certain questions in a survey during the data collection phase. Furthermore, failure in instruments and sensors could be a reason for missing data entries. The table below depicts a database consisting of seven feature variables with the values of some of the variables missing. The variables are X1, X2, X3, X4, X5, X6 and X7.

Consider that the database in question has several records of the seven variables with some of the data entries for some variables not available. The question of interest is, can we say with some degree of certainty what the missing data entries are? Furthermore, can we introduce techniques for approximation of the missing data when correlation and interrelationships between the variables in the database are considered? We aim to use deep learning techniques, Genetic Algorithms (GAs), Maximum Likelihood Estimator (MLE) and Swarm Intelligence (SI) techniques to approximate the missing data in databases with the different models created catering to the different missing data mechanisms and patterns. Therefore, with knowledge of the presence of interrelationships or lack thereof between feature variables in the respective datasets, one will know exactly what model is relevant to the imputation task at hand. Also we plan to use fuzzy logic with deep learning techniques to perform the imputation tasks.

In this section, we present details on the problem of missing data and the Deep Learning techniques we aim to use to solve the problem.

Missing data is a scenario in which some of the components of the dataset are not available for all feature variables, or may not even be defined within the problem domain in the sense that the values do not match the problem definition by either being outliers or inaccurate

(Rubin, 1978). This produces a variety of problems in several application domains that rely on the access to complete and quality data. As a result, techniques aimed at handling the problem have been an area of research for a while in several disciplines [Allison (1999), Little and Rubin (2014) and Rubin (1978)]. Missing data may occur in several ways in a dataset. For example, it may occur due to several participants’ non-response to questions in the data collection process or data entry process . There are also other situations in which missing data may occur due to failures of sensors or instruments in the data recording process for sectors that use these. The following subsubsections present the different missing data mechanisms.

The way to handle missing data in a reasonable manner depends on how the data points go missing. According to Little and Rubin (2014), there exist three missing data mechanisms. They are: Missing Completely at Random (MCAR), Missing at Random (MAR), and a Missing not at Random or Non-Ignorable case(MNAR or NI).

Missing Not at Random or Non-Ignorable Case

]. Each of the layers use the output from the previous layer as input and a supervised or unsupervised algorithm could be used in the training or building phase. With these come applications in supervised and unsupervised problems like classification and pattern analysis respectively. It is also based on the unsupervised learning of multiple levels of features or representations of the input data whereby higher-level features are obtained from lower level features to yield a hierarchical representation of the data

(Deng and Yu, 2014). By learning multiple levels of representations that depict different levels of abstraction of the data, we obtain a hierarchy of concepts.

There are different types of Deep Learning architectures such as Convolutional Neural Networks (CNN), Convolutional Deep Belief Networks (CDBN), Deep Neural Networks (DNN), Deep Belief Networks (DBN), Stacked (Denoising) Auto-Encoders (SAE/SDAE) and Deep/Stacked Restricted Boltzmann Machines (DBM). We intend to make use of DNNs and SAEs predominantly, and the others with the exception of CNNs and CDBNs. DNNs are commonly understood in terms of the Universal Approximation Theorem, Probabilistic Inference or Discrete Signal Processing. An artificial neural network (ANN) with numerous hidden layers of nodes between the input layer and the output layer is known as a DNN. They are typically designed as feed forward networks and can be trained discriminatively utilizing standard back propagation with updates of the weights being done by use of stochastic gradient descent. Typical choices for the activation and cost functions are the softmax and cross entropy functions for classification tasks, with sigmoid and standard error functions used for regression or prediction tasks with normalized inputs. In Figures

1-3, the architectures of four deep learning techniques are depicted. Figure 1 shows a DNN with eight input nodes in the input layer, three hidden layers each with nine nodes and an output layer with four nodes. The nodes from each layer are connected with those from the subsequent and preceding layers. Figure 2 shows a DBN and a DBM whereby the first layer of nodes (bottom-up) is the input layer (v) with visible units representing the database feature variables and the subsequent layers of nodes are binary hidden nodes (h). The arrows in the DBN indicate that the training is a top-down approach while the lack of arrows in the DBM is a result of the training being both top-down and bottom-up. In Figure 3, we see individual RBMs being stacked together to form the encoder part of an autoencoder, which is transposed to yield the decoder part. The autoencoder is then fine-tuned using back propagation to modify the interconnecting weights with the aim being to minimize the network error.

In this section, we present some of the work that has been done by researchers to address the problem of missing data. In Zhang et al. (2011), it is suggested that information within incomplete cases, that is, instances with missing values be used when estimating missing values. A nonparametric iterative imputation algorithm (NIIA) is proposed that leads to a root mean squared error value of at least 0.5 on the imputation of continuous values and a classification accuracy of at most 87.3% on the imputation of discrete values with varying ratios of missingness. Lobato el al. (2015) present a multi-objective genetic algorithm approach for missing data imputation. It is observed that the results obtained outperform some of the well known missing data methods with accuracies in the 90 percentile. In Zhang (2011), the shell-neighbor method is applied in missing data imputation by means of the Shell-Neighbor Imputation (SNI) algorithm which is observed to perform better than the k-Nearest Neighbor imputation method in terms of imputation and classification accuracy as it takes into account the left and right nearest neighbors of the missing data as well as varying number of nearest neighbors contrary to k-NN that considers just fixed k nearest neighbors. Rana et al. (2015) use robust regression imputation for missing data in the presence of outliers and investigate its effectiveness. Abdella and Marwala (2005) implement a hybrid genetic algorithm-neural network system to perform missing data imputation tasks with varying number of missing values within a single instance while Aydilek and Arslan (2012)

create a hybrid k-Nearest Neighbor-Neural Network system for the same purpose. In some cases, neural networks were used with Principal Component Analysis (PCA) and genetic algorithm as in

use a hybrid of Auto-Associative neural networks or autoencoders with genetic algorithm, simulated annealing and particle swarm optimization to impute missing data with high levels of accuracy in cases where just one feature variable has missing input entries. Novel algorithms for missing data imputation and comparisons between existing techniques can be found in papers such as

In this section, we outline the methodology used to address the problem of missing data. The approach used to design the novel imputation techniques with SAE/SDAE involves the following six steps which are depicted in figure 4:

In this research, we are introducing novel data imputation techniques which we expect will be of benefit to the research community interested in missing data imputation. Some of these are:

Although there are possible benefits to using the novel techniques to be introduced, there could possibly be limitations observed, for example:

In this article, we propose a new hypothesis that the use of deep learning techniques in conjunction with swarm intelligence, genetic algorithms and maximum likelihood estimator methods will lead to better imputations due to the fact that a hierarchical representation of the input data is obtained as higher level features are further extracted from lower level features in deep learning methods. This hypothesis is investigated by taking into account a comparison between the techniques to be introduced and the existing methods like Neural Networks with Genetic Algorithm, Auto-Associative Neural Network with Genetic Algorithm, K-Nearest Neighbor with Neural Networks, Neural Networks with Principal Component Analysis and Genetic algorithm and so on. The main motivation behind this hypothesis is the need to provide datasets with highly representative and accurate feature values from which trustworthy decisions and data analytics and statistics will emerge.