Properties of the Discrete Pulse Transform for Multi-Dimensional Arrays

This report presents properties of the Discrete Pulse Transform on multi-dimensional arrays introduced by the authors two or so years ago. The main result given here in Lemma 2.1 is also formulated in a paper to appear in IEEE Transactions on Image Processing. However, the proof, being too technical, was omitted there and hence it appears in full in this publication. 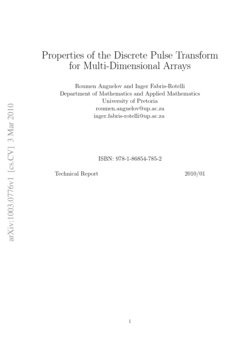 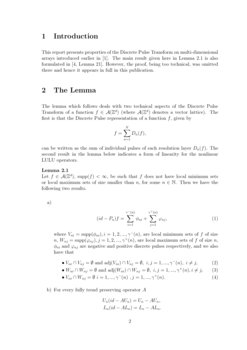 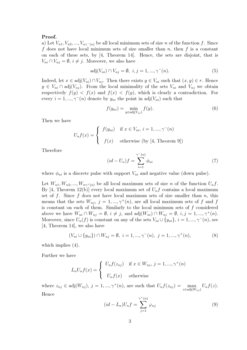 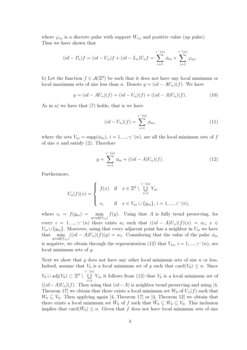 A Class of LULU Operators on Multi-Dimensional Arrays

A robust multi-dimensional sparse Fourier transform in the continuous setting

We propose a way of characterizing the algorithms computing a Walsh-Hada...
François Serre, et al. ∙

On basis images for the digital image representation

This report presents properties of the Discrete Pulse Transform on multi-dimensional arrays introduced earlier in [1]. The main result given here in Lemma 2.1 is also formulated in [4, Lemma 21]. However, the proof, being too technical, was omitted there and hence it appears in full in this publication.

denotes a vector lattice). The first is that the Discrete Pulse representation of a function

can be written as the sum of individual pulses of each resolution layer Dn(f). The second result in the lemma below indicates a form of linearity for the nonlinear LULU operators.

Lemma 2.1 Let f∈A(Zd), supp(f)<∞, be such that f does not have local minimum sets or local maximum sets of size smaller than n, for some n∈N. Then we have the following two results.

Indeed, let x∈adj(Vni)∩Vnj. Then there exists y∈Vni such that (x,y)∈r. Hence y∈Vni∩adj(Vnj). From the local minimality of the sets Vni and Vnj we obtain respectively f(y)<f(x) and f(x)<f(y), which is clearly a contradiction. For every i=1,...,γ−(n) denote by yni the point in adj(Vni) such that

where ϕni is a discrete pulse with support Vni and negative value (down pulse).

where φnj is a discrete pulse with support Wnj and positive value (up pulse). Thus we have shown that

b) Let the function f∈A(Zd) be such that it does not have any local minimum or local maximum sets of size less than n. Denote g=(id−AUn)(f). We have

This proves the first identity. The second one is proved in a similar manner.