Meta-analysis is a statistical method to combine results from multiple clinical or genomic studies with the same or similar research problems. It has been widely use to increase statistical power in finding clinical or genomic differences among different groups. One major category of meta-analysis is combining p-values from independent studies and the Fisher's method is one of the most commonly used statistical methods. However, due to heterogeneity of studies, particularly in the field of genomic research, with thousands of features such as genes to assess, researches often desire to discover this heterogeneous information when identify differentially expressed genomic features. To address this problem, Li2011adaptively proposed very interesting statistical method, adaptively weighted (AW) Fisher's method, where binary weights, 0 or 1, are assigned to the studies for each feature to distinguish potential zero or none-zero effect sizes. Li2011adaptively has shown some good properties of AW fisher's method such as the admissibility. In this paper, we further explore some asymptotic properties of AW-Fisher's method including consistency of the adaptive weights and the asymptotic Bahadur optimality of the test. 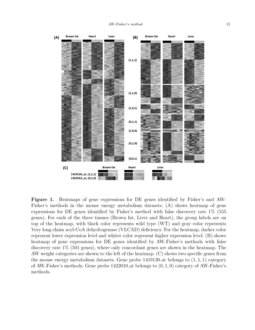 Meta-analysis is one of the most commonly used statistical method to synthesize information from multiple studies, particularly when each single study does not have enough power to draw a meaningful conclusion due to weak signals or small effective sizes. There are two commonly used methods to combine results from different studies: (1) directly combining the effect sizes and (2) indirectly combining p-values from independent studies. Because of heterogeneous nature of alternative distributions, slightly different study goals and types of data, in omics studies, combining p-values is often more appropriate and appealing. Commonly used p-value combing methods include the Fisher’s method (Fisher, 1925), the Stouffer’s method (Stouffer et al., 1949)

In addition, in omics studies, researchers are often more interested in identifying biomarkers that are differentially expressed (DE) with consistent patterns across multiple studies. However, most p-value combining methods such as Fisher’s method are mainly targeting on the gain of statistical power without providing any further information about the heterogeneities of the expression patterns for detected biomarkers. This problem was first gained attention in functional magnetic resonance imaging (fMRI) research (Friston et al., 2005), and many methods have been proposed to address this heterogeneity problem since then. For example, Song and Tseng (2014) proposed rth ordered p-value (rOP) method to test the alternative hypothesis in which signals exist in at least a given percentage of studies; Li and Ghosh (2014) proposed a class of meta-analysis methods based on summaries of weighted ordered p-values (WOP); and Li et al. (2011) proposed an adaptively weighted (AW) Fisher’s method for gene expression data, in which a binary weight, 0 or 1, is assigned to each study in order to distinguish the potential of existing group effects. Similar ideas such as AW-FEM and AW-Bayesian approach were applied to GWAS meta-analysis (Han and Eskin, 2012; Bhattacharjee et al., 2012), where only the effect sizes in a subset of studies were assumed to be non-zero in alternative hypotheses (Flutre et al., 2013).

The AW-Fisher’s method has appealing feature in practice. This is because additional information can be obtained though estimated adaptive weights for detected DE genes. The adaptive weight estimates

In this paper, we will further explore some asymptotic properties such as consistency of the adaptive weights and asymptotic Bahadur optimality (ABO) of the test (Bahadur, 1967).

This paper is organized as follows. In Section 2, method will be briefly reviewed and in Section 3, consistency of AW-Fisher weights is addressed. Asymptotic Barhadur optimality will be discussed in Section 4. In section 5, simulations are used to show the consistency and exact slopes. The paper ends with discussion in Chapter 6.

Considering to combine K independent studies, denote the effect size by →θ=(θ1,…,θK)∈RK and let the corresponding p-value of study k be pk for k=1,⋯,K. The null and alternative hypothesis settings considered in this paper are

Fisher’s method summarizes p-values using the statistic TF=−2∑Kk=1log(pk) to test this hypothesis setting. It has been shown that TF follows a χ2 distribution with 2Kdegrees of freedom if data from different studies are independent and there are no underlying difference from all studies (θk=0 for all k). However, in genomic studies, usually tens of thousand of features are considered. The heterogeneous expression patterns are of interests. Fisher’s method does not provide any information about the potential different expression patterns from different features. Li et al. (2011)

is the cumulative distribution function (CDF) of

. The test statistic of AW-Fisher based on p-value vector

→P is defined as

where optimal weight is determined by

Here s(⋅) is the mapping function from p-value vector to the AW-Fisher test statistic. Let S=s(→P), then equation (1) implies that the best adaptive weights ^w can be obtained by comparing all 2K−1 none-zero combinations of weights ^w. In Li et al. (2011), a permutation algorithm was proposed to calculate the p-value P(S≥sobs), where the observed AW-statistic sobs=s(→pobs) and →pobs

is the observed p-values. In Huo et al. (2017), an importance sampling technique with spline interpolation and a linear weight search scheme is proposed to overcome computational burden and lack of accuracy for small p-values of the permutation algorithm.

3 Consistency of the weight estimates

Before we prove the consistency of AW-Fisher’s weight estimates and the asymptotic Bahadur optimality of the AW-Fisher’s method, we review exact slope and present some assumptions.

For K independent studies to test H0:θk=0 with sample size nk and p-value pk for k=1,⋯,K, the statistical test for study k has exact slope ck(θ), if

The exact slope ck(θ) is non-negative and used to measure how fast the p-value pk converge to zero as nk goes to infinity. If the test statistics comes from alternative hypothesis, ck(θ) is positive while under the null ck(θ)=0.

When we consider the consistency, we assume the proportion of total samples assigned to each study are asymptotically fixed. I.e.

Next we prove the main theorem of the consistency.

Let w∗={→w:wk=1 if θk≠0 % or 0 if θk=0}, the true weight vector. ^w→w∗ as n→∞ where ^w statisfies Equation (1), i.e. asymptotically all and only the studies with non-zero effect sizes will contribute to the AW statistic.

Notice that here we only require that Ci+ℓ>0 and Ci+ℓ>Ci to let the above argument hold.

Second, if there exist ℓ′ studies with zero effect size that have a weight 1. Without loss of generality, let θi−ℓ′+1,...,θi=0. In order to have weight 1 for these studies, one must have

Based on the previous two results proved above, for ℓ>0 ,then we have

as n goes to infinity.

as n goes to infinity. ∎

Bahadur (1967) first discussed the asymptotic optimality of statistical test under the conditions of exact slopes and proportional sample sizes as shown in the previous section, which is called asymptotic Bahadur optimality (ABO) by using the ratio of the exact slopes of different statistical tests and the test with larger exact slope is viewed as superior. Littell and Folks (1971) showed that the Fisher’s method is ABO. In this paper we will use the Bahadur relative efficiency as our primary measure of comparing p-value combination methods. Assuming two statistical tests are formed to test the same hypothesis and have exact slopes c1(θ) and c2(θ) respectively, then the ratio c1(θ)/c2(θ) is the exact Bahadur efficiency of test 1 relative to test 2, and c1(θ)/c2(θ)>1 implies that test 1 is asymptotically more efficient than test 2. For θ=0, −2nlog(p)→0

with probability one, i.e., if the effect size is

follows chi-square distribution with degree of freedom k. Then

Under the conditions about exact slopes and proportion of sample sizes, we have cAW(θ)=cFisher(θ), i.e., the AW-Fisher’s method is ABO.

as n goes to infinity. Since the adaptive weights are consistent,and by Lemma 1 and 2, we have

On the other hand, since

by utilizing the consistency of the adaptive weights and Lemma 3 and 4 again, we have

In this simulation, we use numerical approach to evaluate and verify the convergence rate of the weight estimates. We consider K=4 studies with the same sample size n

for all studies. The data are generated from standard normal distribution with

under the null hypothesis and

where Φ is the cumulative density function of standard normal distribution.

In the first simulation, we estimate the convergence rate for studies with non-zero effective size, i.e. P(^wk=0|w∗k=1). We have shown in Section 3 that

Given sample size n, the AW weight estimate can be obtained according to equation (1). We generated scattered plot of ^P(^wk=0|w∗k=1)/n with respect to sample size and it is shown in Figure 2(a). We further fitted a curve with functional form anexp{−bn}, where a and b are the parameters estimated from the data. The estimates are ^a= and ^b=. The fitted curve agrees with the functional form a nexp{−bn} very well.

In the second simulation, we set the one study (study 4) with effective size 0 and all other studies with effect size 0.4 to estimate P(^wk=1|w∗k=0). As shown in Section 3, the converge rate for study with zero effect size is

We again use 1 million simulations to estimate this probability for n=200−1000 for study 4. And the AW weight estimate can be obtained according to equation (1). The scattered plot of P(^wk=1|w∗k=0) against sample size is shown in Figure 2(b). We further fitted a curve with functional form 1a+bn, where a and b are the parameters estimated from the data and the fitted curve agrees with the simulated data very well.

The AW-Fisher’s method proposed in Li et al. (2011) has shown to have many good properties such as admissibility and better overall power compared to min-P, max-P and Fisher’s methods in various situations. More importantly, the adaptive weights can provide additional information about heterogeneity of effect sizes in the different studies, a feature particularly appealing in the genomic meta-analysis.