Motivated by the problem of computer-aided detection (CAD) of pulmonary nodules, we introduce methods to propagate and fuse uncertainty information in a multi-stage Bayesian convolutional neural network (CNN) architecture. The question we seek to answer is "can we take advantage of the model uncertainty provided by one deep learning model to improve the performance of the subsequent deep learning models and ultimately of the overall performance in a multi-stage Bayesian deep learning architecture?". Our experiments show that propagating uncertainty through the pipeline enables us to improve the overall performance in terms of both final prediction accuracy and model confidence. 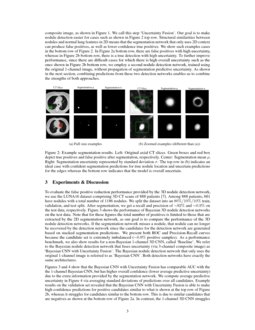 We introduce techniques for fusing model confidence information with pixel-level image information to enable uncertainty estimates to propagate, along with the image data, in a multi-stage Bayesian deep learning framework. Using computer-aided detection (CAD) of pulmonary nodules as an example, we demonstrate that Bayesian modeling in a multi-stage setting not only provides model confidence associated with nodule detection decisions, but, via propagation of uncertainty information between networks, also improves the overall detection/classification performance. This is important to build physician trust in the model’s performance for applications such as cancer detection, where knowing that a result has high vs. low confidence can influence a follow-on treatment decision. To the best of our knowledge, none of the existing methods for lung lesion detection

The problem of computer-aided detection (or CAD) of pulmonary nodules using low-dose CT scans has a number of unique challenges anode09 ; luna16 . First, each scan is very large, prohibiting them from being used as full size 3D images for deep learning due to computational resource constraints. Second, pulmonary nodules to be detected are much smaller than full CT scans and they have high variability in terms of shape, size, and texture properties. These challenges have motivated researchers to divide the original problem into simpler subproblems and use multi-stage learning algorithms, where each algorithm attempts to solve a simpler subproblem. More specifically for the CAD problem, it is common to first segment 2D slices to find regions of interest (narrowing the search space) followed by performing 2D or 3D nodule detection within each region of interest to improve detection results.

Motivated by the CAD problem, we consider a multi-stage deep learning architecture as shown in Figure 1, comprising two consecutive Bayesian convolutional neural networks (CNNs) cascaded in a way that the predictions of the segmentation network inform the predictions of the nodule detection network. The overall performance of such an architecture depends on the individual performance of each network as well as on the coupling between them. In this architecture, each network has a different local view of the full CT scan. The segmentation network operates on full 2D axial CT slices (see Figure 1(a)), whereas the detection network operates on small 3D volumes.

As described in the previous section and shown in Figure 1, we have two Bayesian CNNs in our CAD architecture. Each network has a different local view of the full CT scan. For 2D segmentation (1st stage of the CAD architecture), we employ a 10-layer U-net architecture unet_miccai15

as a base network and add dropout with probability of

Kendall2015BayesianSM . We note that, to our knowledge, Bayesian U-Net has not been employed for medical image segmentation before.

for numerical results). To perform nodule detection with reduced false positive rates, we employ a 3D CNN (2nd stage of the CAD architecture) with three convolutional and two fully connected layers. This detection network operates on small 3D nodule candidates that are extracted based on stacked segmentation predictions from the 2D axial slices. The reason we use 3D volumes for nodule detection is that suspicious nodules have unique 3D features that differentiate them from normal lung lesions. Similar to the approach for segmentation, we perform approximate Bayesian inference via stochastic dropout at test time to obtain

Segmentation prediction statistics are used as additional features for nodule detection by concatenating segmentation predictive mean and standard deviation with the original image to form a 3-channel composite image, as shown in Figure 1. We call this step ‘Uncertainty Fusion’. Our goal is to make nodule detection easier for cases such as shown in Figure 2 top row. Structural similarities between nodules and normal lung features in 2D means that the segmentation network that only uses 2D context can produce false positives, as well as lower confidence true positives. We show such examples cases in the bottom row of Figure 2. In Figure 1(a) bottom row, there are false positives with high uncertainty, whereas in Figure 1(b) bottom row, there is a true detection with high uncertainty. To further improve performance, since there are difficult cases for which there is high overall uncertainty such as the ones shown in Figure 1(b) bottom row, we employ a second nodule detection network, trained using the original 1-channel image, without propagation of segmentation predictive uncertainty. As shown in the next section, combining predictions from these two detection networks enables us to combine the strengths of both approaches.

Figures 3 and 4 show that the Bayesian CNN with Uncertainty Fusion has comparable AUC with the the 1-channel Bayesian CNN, but has higher overall confidence (lower average predictive uncertainty) due to the extra information provided by the segmentation network. We compute average predictive uncertainty in Figure 4 via averaging standard deviations of predictions over all candidates. Example results on the validation set revealed that the Bayesian CNN with Uncertainty Fusion is able to make high confidence predictions for positive candidates similar to what is shown at the top row of Figure 1(b), whereas it struggles for candidates similar to the bottom row. This is due to similar candidates that are negatives as shown at the bottom row of Figure 1(a). In contrast, the 1-channel 3D CNN struggles with some of the small nodules that the 3-channel 3D CNN easily identifies thanks to the uncertainty information provided by the segmentation network.

To assess the dependence between predictions of the two Bayesian CNNs, we computed Spearman’s rank corrrelation coefficient on the validation set resulting in ρ=0.346 (p<10−5), which shows weak dependence between the predictions, confirming our manual inspection. Based on this information, we combined the two predictions via convex combination to create an ensembled prediction. We selected a weight of 0.5 on each prediction, because it maximized the AUC on the validation set. As shown in Figure 3, this ensembling approach resulted in significant improvement relative to either network operating independently. Further, denoting the test predictions of the two networks as y∗1 and y∗2, we can show that y∗1|x∗,D and y∗2|x∗,D

are two independent random variables, where

are the test input and the training data, respectively. Therefore, we can calculate the predictive variance of the ensembling approach for each ensemble prediction. Figure

The performance of 3D Bayesian CNNs are comparable or better than the non-Bayesian baseline model. More importantly, unlike the non-Bayesian baseline, they provide model uncertainty/confidence information which could be extremely valuable for medical applications. We note that the performance improvement is more pronounced for the Precision-Recall curves since the positive class is extremely underrepresented in the data. We also show Brier scores deGroot83 (weighted due to heavy class imbalance) of test predictions in Table 1 showing that the Bayesian CNN with Uncertainty Fusion provides better performance than the 1-channel Bayesian CNN in terms of Brier score, and that ensembling the two methods provides the best performance.

Focusing on a CAD problem, we proposed a method to propagate and fuse uncertainty information in a multi-stage Bayesian convolutional neural network (CNN) architecture. Our experiments showed that propagating and fusing uncertainty improved the overall performance in terms of both final prediction accuracy and model confidence. Although the specific problem we considered in this paper was CAD, the proposed method could be used in a variety of applications for which the knowledge of uncertainty is important and informs subsequent decision making processes in the overall system. Example applications include medical image based diagnostics, autonomous driving, and robotics.

Our results pave the way for several interesting research questions that we will investigate as future work. Although we performed ensembling to combine the predictions from two detection networks, we will explore whether we can integrate this ensembling process within a single CNN architecture and have a single network learn how to best combine the information from different channels. We will also consider adaptive ensembling approaches, where predictions are combined by using the information about each prediction’s uncertainty. In addition, we will investigate other approximate Bayesian inference techniques such as variational dropout kingma_nips15 and assess how close the estimated uncertainties via different approximations are to true uncertainties. This information could be crucial for certain applications such as medicine, where overestimation of uncertainty may be preferable to underestimation. Finally, we will investigate whether we can separately model the uncertainty due to lack of training data and the uncertainty due to inherent noise in the data gal_arxiv17 , which may have different implications for subsequent decision making processes.