The objective optimization of medical imaging systems requires full characterization of all sources of randomness in the measured data, which includes the variability within the ensemble of objects to-be-imaged. This can be accomplished by establishing a stochastic object model (SOM) that describes the variability in the class of objects to-be-imaged. Generative adversarial networks (GANs) can be potentially useful to establish SOMs because they hold great promise to learn generative models that describe the variability within an ensemble of training data. However, because medical imaging systems record imaging measurements that are noisy and indirect representations of object properties, GANs cannot be directly applied to establish stochastic models of objects to-be-imaged. To address this issue, an augmented GAN architecture named AmbientGAN was developed to establish SOMs from noisy and indirect measurement data. However, because the adversarial training can be unstable, the applicability of the AmbientGAN can be potentially limited. In this work, we propose a novel training strategy—Progressive Growing of AmbientGANs (ProAGAN)—to stabilize the training of AmbientGANs for establishing SOMs from noisy and indirect imaging measurements. An idealized magnetic resonance (MR) imaging system and clinical MR brain images are considered. The proposed methodology is evaluated by comparing signal detection performance computed by use of ProAGAN-generated synthetic images and images that depict the true object properties. 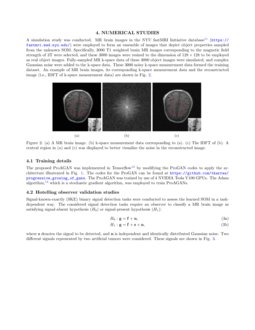 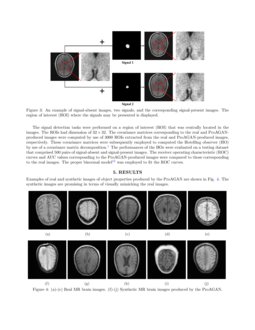 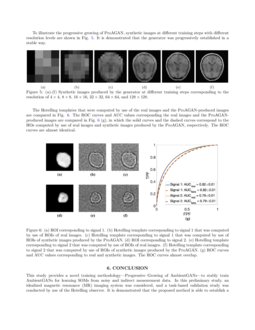 It has been widely accepted that the optimization of medical imaging systems should be guided by objective measures of image quality (IQ) that quantify the performance of an observer at specific tasks[barrett2013foundations, zhou2018learning, zhou2019learningIO, zhou2019learningHO, zhou2019approximating]. The performance of a numerical observer ideally should account for all sources of randomness in the measured data, which includes the variability within a group of objects being imaged[barrett2013foundations, kupinski2003experimental, dolly2018learning, zhou2018learning, zhou2019learningIO, zhou2019learningHO, zhou2019approximating]. To achieve this, one can establish a stochastic object model (SOM) that can sample numerous realizations of objects from the ensemble of objects to-be-imaged. To establish a SOM that describes the to-be-imaged distribution, it is desirable to establish it from experimental measurements. Moreover, the established SOM should be independent of the imaging system. Kupinski et al. developed a method to fit SOMs by use of noisy imaging measurements[kupinski2003experimental]. However, the reported applications have been limited to lumpy and clustered lumpy object models[kupinski2003experimental]. In order to establish more complicated SOMs, Zhou et al.

[bora2018ambientgan] to learn SOMs from noisy and indirect measurements[zhou2019learning]. In that proof-of-concept study, a simple lumpy object model was considered[zhou2019learning]. However, it is well-known that training of GANs can be unstable and, therefore, in practice, it can be difficult to learn the statistical properties of the to-be-imaged distribution.

A recently developed GAN training methodology—Progressive Growing of GANs (ProGANs)—holds great promise to stabilize the training of GANs and has been successfully employed to generate high-quality synthetic images with high resolutions[karras2017progressive]. Unlike the conventional training of GANs, in which all scales of the image distribution are learned simultaneously, the training of ProGANs starts with low-resolution images. Subsequently, network layers are added progressively to the generator and discriminator in synchrony to increase the image resolution for learning finer scale details of the image distribution. Here, the generator and the discriminator have mirrored architectures. It has been shown that GAN training stability and the quality of the produced synthetic images can be improved significantly by use of this training strategy[karras2017progressive]. However, because medical imaging systems record noisy and indirect measurements of object properties, ProGANs cannot be immediately applied to establish stochastic models of objects to-be-imaged.

In this study, inspired by the ProGAN[karras2017progressive] and the AmbientGAN[bora2018ambientgan], we propose a novel training methodology—Progressive Growing of AmbientGANs (ProAGANs)—to stably train AmbientGANs to establish SOMs from noisy and indirect imaging measurements. An idealized magnetic resonance (MR) imaging system and clinical MR brain images from NYU fastMRI Initiative database[zbontar2018fastmri] were considered. The proposed methodology was evaluated by comparing signal detection performance computed by use of ProAGAN-generated synthetic images and images that depict the true object properties.

denotes a vector of an object image having dimension of

An augmented GAN architecture named AmbientGAN was developed to learn SOMs from noisy and indirect measurements of object properties[bora2018ambientgan, zhou2019learning]. Similar to GANs, AmbientGANs comprise a generator and a discriminator. The generator is trained to produce synthetic digital images that depict the object properties. Synthetic imaging measurements are subsequently simulated by applying the corresponding imaging operator H to the finite-dimensional representations of the object property produced by the generator. The discriminator that maps Rm→R is applied to distinguish between real and synthetic imaging measurements. The training process of AmbientGANs can be represented by a two-player minimax game:

Here, ^g=H^f+n, where ^f=G(z;θG), and l(⋅) represents an objective function. It has been shown that when pf uniquely induces pg, and both the discriminator and the generator possess sufficient capacity, p^f approximates pf when the global optimal of the minimax game is achieved[goodfellow2014generative, bora2018ambientgan].

Progressive Growing of GANs (ProGANs) were developed to stabilize the training of GANs[karras2017progressive]. Unlike the conventional GANs, in which the generator and the discriminator are trained to learn all scales of image distribution by use of full resolution images through the whole training process, the training of ProGANs start with training the first few layers of the generator and discriminator on low-resolution images that are down-scaled from the original images. Higher-resolution images are subsequently employed and more layers of the generator and discriminator are progressively included in the training to learn finer scale details of the image distribution. It has been shown that the ProGAN training strategy results in significantly improved training stability and produces synthetic images with the state-of-the-art image quality[karras2017progressive]. However, like other GANs, ProGANs cannot be immediately applied to learn SOMs from noisy and/or indirect imaging measurements.

In this work, we propose a novel training strategy named Progressive Growing of AmbientGANs (ProAGANs) to stably train the AmbientGANs for establishing SOMs from noisy and indirect imaging measurements. A MR imaging system that fully samples k-space data was considered: g=F(f)+n, where F(⋅)

denotes a 2D discrete Fourier transform (DFT). The generator in the proposed ProAGAN was trained to synthesize images that depict object properties in the to-be-imaged distribution. However, because the MR imaging system records noisy k-space measurement data, the discriminator cannot be applied directly to distinguish between real and synthetic object images. In our proposed architecture of ProAGAN, a 2D inverse discrete Fourier transform (IDFT)

F−1 is included in the training of ProAGAN to reconstruct object images from k-space measurements, and the discriminator is trained to distinguish between real and synthetic reconstructed images. The goal is to learn the distribution of images that depict to-be-imaged object properties by progressively training a generator by competing against a discriminator that distinguishes between real and synthetic reconstructed images. This training process is illustrated in Fig. 1.

A simulation study was conducted. MR brain images in the NYU fastMRI Initiative database [zbontar2018fastmri] (https://fastmri.med.nyu.edu/) were employed to form an ensemble of images that depict object properties sampled from the unknown SOM. Specifically, 3000 T1 weighted brain MR images corresponding to the magnetic field strength of 3T were selected, and these 3000 images were resized to the dimension of 128×128 to be employed as real object images. Fully-sampled MR k-space data of these 3000 object images were simulated, and complex Gaussian noise were added to the k-space data. These 3000 noisy k-space measurement data formed the training dataset. An example of MR brain images, its corresponding k-space measurement data and the reconstructed image (i.e., IDFT of k-space measurement data) are shown in Fig. 2.

The proposed ProAGAN was implemented in Tensorflow

[abadi2016tensorflow] by modifying the ProGAN codes to apply the architecture illustrated in Fig. 1. The codes for the ProGAN can be found at https://github.com/tkarras/progressive_growing_of_gans. The ProAGAN was trained by use of 4 NVIDIA Tesla V100 GPUs. The Adam algorithm [kingma2014adam], which is a stochastic gradient algorithm, was employed to train ProAGANs.

where s denotes the signal to be detected, and n is independent and identically distributed Gaussian noise. Two different signals represented by two artificial tumors were considered. These signals are shown in Fig. 3.

The signal detection tasks were performed on a region of interest (ROI) that was centrally located in the images. The ROIs had dimension of 32×32. The covariance matrices corresponding to the real and ProAGAN-produced images were computed by use of 3000 ROIs extracted from the real and ProAGAN-produced images, respectively. These covariance matrices were subsequently employed to computed the Hotelling observer (HO) by use of a covariance matrix decomposition[barrett2013foundations]. The performances of the HOs were evaluated on a testing dataset that comprised 500 pairs of signal-absent and signal-present images. The receiver operating characteristic (ROC) curves and AUC values corresponding to the ProAGAN-produced images were compared to those corresponding to the real images. The ‘proper’ binormal model[pesce2007reliable] was employed to fit the ROC curves.

To illustrate the progressive growing of ProAGAN, synthetic images at different training steps with different resolution levels are shown in Fig. 5. It is demonstrated that the generator was progressively established in a stable way.

This study provides a novel training methodology—Progressive Growing of AmbientGANs—to stably train AmbientGANs for learning SOMs from noisy and indirect measurement data. In this preliminary study, an idealized magnetic resonance (MR) imaging system was considered, and a task-based validation study was conducted by use of the Hotelling observer. It is demonstrated that the proposed method is able to establish a SOM by use of noisy k-space measurement data. From the perspective of the HO, for the signal detection tasks considered, it was found that the images synthesized by the learned SOM contained nearly the same task-specific information as the true object property images.