The International Workshop on Locational Analysis and Related Problems will take place during January 23-24, 2020 in Seville (Spain). It is organized by the Spanish Location Network and the Location Group GELOCA from the Spanish Society of Statistics and Operations Research(SEIO). The Spanish Location Network is a group of more than 140 researchers from several Spanish universities organized into 7 thematic groups. The Network has been funded by the Spanish Government since 2003. One of the main activities of the Network is a yearly meeting aimed at promoting the communication among its members and between them and other researchers, and to contribute to the development of the location field and related problems. The last meetings have taken place in Cádiz (January 20-February 1, 2019), Segovia (September 27-29, 2017), Málaga (September 14-16, 2016), Barcelona (November 25-28, 2015), Sevilla (October 1-3, 2014), Torremolinos (Málaga, June 19-21, 2013), Granada (May 10-12, 2012), Las Palmas de Gran Canaria (February 2-5, 2011) and Sevilla (February 1-3, 2010). The topics of interest are location analysis and related problems. This includes location models, networks, transportation, logistics, exact and heuristic solution methods, and computational geometry, among others. 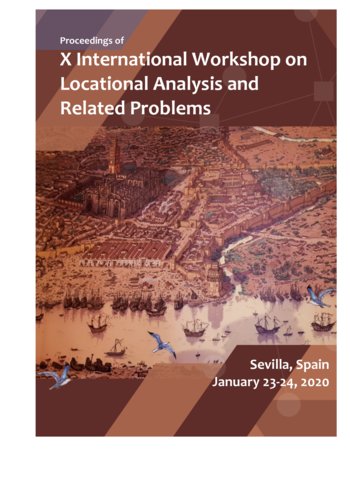