In this short note, we address a common misconception at the interface of probability theory and public-key cryptography. 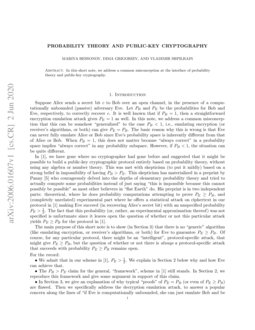 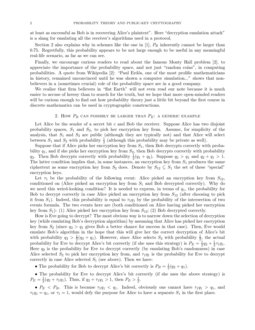 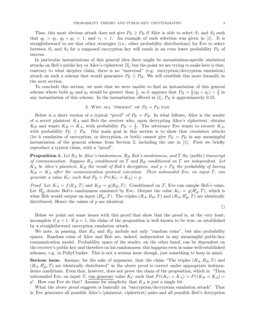 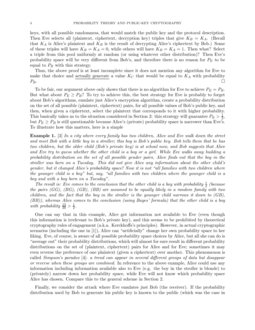 A Secured Protocol for IoT Networks

Researchers in the past have shown that Symmetric key cryptography is ge...
Ananth Vishnu Bhaskar, et al. ∙

We formalize the simulation paradigm of cryptography in terms of categor...
Anne Broadbent, et al. ∙

Suppose Alice sends a secret bit c to Bob over an open channel, in the presence of a computationally unbounded (passive) adversary Eve. Let PB and PE be the probabilities for Bob and Eve, respectively, to correctly recover c. It is well known that if PB=1, then a straightforward encryption emulation attack gives PE=1 as well. In this note, we address a common misconception that this can be somehow “generalized” to the case PB<1, i.e., emulating encryption (or receiver’s algorithms, or both) can give PE=PB. The basic reason why this is wrong is that Eve can never fully emulate Alice or Bob since Eve’s probability space is inherently different from that of Alice or Bob. When PB=1, this does not matter because “always correct” in a probability space implies “always correct” in any probability subspace. However, if PB<1, the situation can be quite different.

In [1], we have gone where no cryptographer had gone before and suggested that it might be possible to build a public-key cryptographic protocol entirely based on probability theory, without using any algebra or number theory. This was met with skepticism (to put it mildly) based on a strong belief in impossibility of having PB>PE. This skepticism has materialized in a preprint by Panny [5] who courageously delved into the depths of elementary probability theory and tried to actually compute some probabilities instead of just saying “this is impossible because this cannot possibly be possible” as most other believers in “flat Earth” do. His preprint is in two independent parts: theoretical, where he does probability computations attempting to prove PE≥PB, and (completely unrelated) experimental part where he offers a statistical attack on ciphertext in our protocol in [1] making Eve succeed (in recovering Alice’s secret bit) with an unspecified probability PE>12. The fact that this probability (or, rather, an experimental approximation thereof) was not specified is unfortunate since it leaves open the question of whether or not this particular attack yields PE≥PB for the protocol in [1].

The main purpose of this short note is to show (in Section 3) that there is no “generic” algorithm (like emulating encryption, or receiver’s algorithms, or both) for Eve to guarantee PE≥PB. Of course, for any particular protocol, there might be an “intelligent”, protocol-specific attack, that might give PE≥PB, but the question of whether or not there is always a protocol-specific attack that succeeds with probability PE≥PB remains open.

∙ We admit that in our scheme in [1], PE>12. We explain in Section 2 below why and how Eve can achieve that.

∙ The PB>PE claim for the general, “framework”, scheme in [1] still stands. In Section 2, we reproduce this framework and give some argument in support of this claim.

∙ In Section 3, we give an explanation of why typical “proofs” of PE=PB (or even of PE≥PB) are flawed. Then we specifically address the decryption emulation attack, to answer a popular concern along the lines of “if Eve is computationally unbounded, she can just emulate Bob and be at least as successful as Bob is in recovering Alice’s plaintext”. Here “decryption emulation attack” is a slang for emulating all the receiver’s algorithms used in a protocol.

Section 2 also explains why in schemes like the one in [1], PB inherently cannot be larger than 0.75. Regretfully, this probability appears to be not large enough to be useful in any meaningful real-life scenario, as far as we can see.

Finally, we encourage curious readers to read about the famous Monty Hall problem [2], to appreciate the importance of the probability space, and not just “random coins”, in computing probabilities. A quote from Wikipedia [2]: “Paul Erdös, one of the most prolific mathematicians in history, remained unconvinced until he was shown a computer simulation…” shows that non-believers in a (sometimes crucial) role of the probability space are in a good company.

We realize that firm believers in “flat Earth” will not even read our note because it is much easier to accuse of heresy than to search for the truth, but we hope that more open-minded readers will be curious enough to find out how probability theory just a little bit beyond the first course in discrete mathematics can be used in cryptographic constructions.

2. How Pb can possibly be larger than Pe: a generic example

Let Alice be the sender of a secret bit c and Bob the receiver. Suppose Alice has two disjoint probability spaces, S1 and S2, to pick her encryption key from. Assume, for simplicity of the analysis, that S1 and S2 are public (although they are typically not) and that Alice will select between S1 and S2 with probability 12 (although this probability may be private as well).

∙ The probability for Bob to decrypt Alice’s bit correctly is PB=12(q2+q1).

. It is straightforward to see that other strategies (i.e., other probability distributions) for Eve to select between

S1 and S2 for a supposed encryption key will result in an even lower probability PE of success.

In particular instantiations of this general idea there might be instantiation-specific statistical attacks on Bob’s public key or Alice’s ciphertext [5], but the point we are trying to make here is that, contrary to what skeptics claim, there is no “universal” (e.g. encryption/decryption emulation) attack on such a scheme that would guarantee PE≥PB. We will establish this more formally in the next section.

Below is a short version of a typical “proof” of PE=PB. In what follows, Alice is the sender of a secret plaintext KA and Bob the receiver who, upon decrypting Alice’s ciphertext, obtains KB and wants KB=KA, with probability PB>12. The adversary Eve wants to recover KA, with probability PE≥PB. Our main goal in this section is to show that emulation attacks (be it emulation of encryption, or decryption, or both) cannot give PE=PB in any meaningful instantiation of the general scheme from Section 2, including the one in [1]. First we briefly reproduce a typical claim, with a “proof”.

Let RA be Alice’s randomness, RB Bob’s randomness, and T the (public) transcript of communication. Suppose RA conditioned on T and RB conditioned on T are independent. Let KA be Alice’s plaintext, KB the result of Bob’s decryption, and p=PB the probability of having KB=KA after the communication protocol execution. Then unbounded Eve, on input T, can generate a value KC such that PE=Pr(KC=KA)=p.

Let KA=f(RA,T) and KB=g(RB,T). Conditioned on T, Eve can sample Bob’s coins. Let R′B denote Bob’s randomness emulated by Eve. Output the value KC=g(R′B,T), which is what Bob would output on input (R′B,T). The triples (RA,RB,T) and (RA,R′B,T) are identically distributed. Hence the values of p are identical.

Below we point out some issues with this proof that show that the proof is, at the very least, incomplete if p<1. If p=1, the claim of the proposition is well known to be true, as established by a straightforward encryption emulation attack.

We note, in passing, that RA and RB include not only “random coins”, but also probability spaces. Random coins of Alice and Bob are, indeed, independent in any meaningful public-key communication model. Probability space of the sender, on the other hand, can be dependent on the receiver’s public key and therefore on his randomness; this happens even in some well-established schemes, e.g. in PollyCracker. This is not a serious issue though, just something to keep in mind.

Serious issue. Assume, for the sake of argument, that the claim “The triples (RA,RB,T) and (RA,R′B,T) are identically distributed” in the above proof is correct under appropriate independence conditions. Even that, however, does not prove the claim of the proposition, which is: “Then unbounded Eve, on input T, can generate value KC such that Pr(KC=KA)=Pr(KB=KA)=p”. How can Eve do that? Assume for simplicity that KA is just a single bit.

What the above proof suggests is basically an “encryption/decryption emulation attack”. That is, Eve generates all possible Alice’s (plaintext, ciphertext) pairs and all possible Bob’s decryption keys, with all possible randomness, that would match the public key and the protocol description. Then Eve selects all (plaintext, ciphertext, decryption key) triples that give KB=KA. (Recall that KA is Alice’s plaintext and KB is the result of decrypting Alice’s ciphertext by Bob.) Some of these triples will have KB=KA=0, while others will have KB=KA=1. Then what? Select a triple from this pool uniformly at random (or using whatever other distribution)? Then Eve’s probability space will be very different from Bob’s, and therefore there is no reason for PE to be equal to PB with this strategy.

Thus, the above proof is at least incomplete since it does not mention any algorithm for Eve to make that choice and actually generate a value KC that would be equal to KA with probability PB. ∎

To be fair, our argument above only shows that there is no algorithm for Eve to achieve PE=PB. But what about PE≥PB? To try to achieve this, the best strategy for Eve is probably to forget about Bob’s algorithms, emulate just Alice’s encryption algorithm, create a probability distribution on the set of all possible (plaintext, ciphertext) pairs, for all possible values of Bob’s public key, and then, when given a ciphertext, select the plaintext that corresponds to it with higher probability. This basically takes us to the situation considered in Section 2: this strategy will guarantee PE>12, but PE≥PB is still questionable because Alice’s (private) probability space is narrower than Eve’s. To illustrate how this matters, here is a simple

One can say that in this example, Alice got information not available to Eve (even though this information is irrelevant to Bob’s private key), and this seems to be prohibited by theoretical cryptography rules of engagement (a.k.a. Kerckhoffs’s principles). However, in actual cryptographic scenarios (including the one in [1]), Alice can “artificially” change her own probability space to her liking. Eve, of course, is aware of all possible probability space choices by Alice, but all she can do is “average out” their probability distributions, which will almost for sure result in different probability distributions on the set of (plaintext, ciphertext) pairs for Alice and for Eve; sometimes it may even reverse the preference of one plaintext (given a ciphertext) over another. This phenomenon is called Simpson’s paradox [4]: a trend can appear in several different groups of data but disappear or reverse when these groups are combined. In reference to the above example, Alice could use any information including information available also to Eve (e.g. the boy in the stroller is blonde) to (privately) narrow down her probability space, while Eve will not know which probability space Alice has chosen. Compare this to the general scheme in Section 2.

Emulating Bob will result in the following success probability PE for Eve to recover KA in the case where KA is a single bit (assuming that KB and KC, too, can only take values 0 or 1):

Thus, while there might be an instantiation-specific statistical attack on Bob’s public key, it will have nothing to do with emulation attack(s) suggested by the above proof of Proposition 1. This also explains why the two parts (theoretical and experimental) in [5] are completely unrelated and perhaps also why the probability PE in the experimental part of [5] is not specified.