Probabilistic refinement of the asymptotic spectrum of graphs

The asymptotic spectrum of graphs, introduced by Zuiddam (arXiv:1807.00169, 2018), is the space of graph parameters that are additive under disjoint union, multiplicative under the strong product, normalized and monotone under homomorphisms between the complements. He used it to obtain a dual characterization of the Shannon capacity of graphs as the minimum of the evaluation function over the asymptotic spectrum and noted that several known upper bounds, including the Lovász number and the fractional Haemers bounds are in fact elements of the asymptotic spectrum (spectral points). We show that every spectral point admits a probabilistic refinement and characterize the functions arising in this way. This reveals that the asymptotic spectrum can be parameterized with a convex set and the evaluation function at every graph is logarithmically convex. One consequence is that for any incomparable pair of spectral points f and g there exists a third one h and a graph G such that h(G)<{f(G),g(G)}, thus h gives a better upper bound on the Shannon capacity of G. In addition, we show that the (logarithmic) probabilistic refinement of a spectral point on a fixed graph is the entropy function associated with a convex corner. 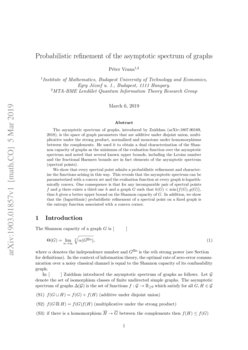 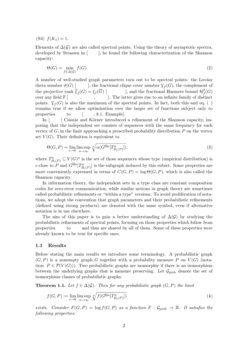 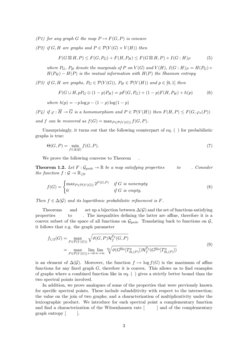 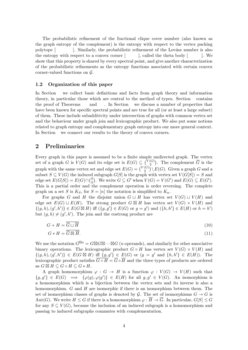 The asymptotic spectrum of graphs and the Shannon capacity

We introduce the asymptotic spectrum of graphs and apply the theory of a...
Jeroen Zuiddam, et al. ∙

On a tracial version of Haemers bound

Shannon capacity and the categorical product

In this paper we present a new approach for tightening upper bounds on t...
Tamir Hazan, et al. ∙

The Shannon capacity of a graph G is [Sha56]

where α denotes the independence number and G⊠n is the nth strong power (see Section 2 for definitions). In the context of information theory, the optimal rate of zero-error communication over a noisy classical channel is equal to the Shannon capacity of its confusability graph.

Elements of Δ(G) are also called spectral points. Using the theory of asymptotic spectra, developed by Strassen in [Str88], he found the following characterization of the Shannon capacity:

A number of well-studied graph parameters turn out to be spectral points: the Lovász theta number ϑ(G) [Lov79], the fractional clique cover number ¯¯¯¯χf(G), the complement of the projective rank ¯¯¯ξf(G)=ξf(¯¯¯¯G) [CMR+14], and the fractional Haemers bound HFf(G) over any field F [Hae78, Bla13, BC18]. The latter gives rise to an infinite family of distinct points. ¯¯¯¯χf(G) is also the maximum of the spectral points. In fact, both this and eq. 2 remains true if we allow optimization over the larger set of functions subject only to properties 4, 3 and 2 [Fri17, 8.1. Example].

In [CK81] Csiszár and Körner introduced a refinement of the Shannon capacity, imposing that the independent set consists of sequences with the same frequency for each vertex of G

, in the limit approaching a prescribed probability distribution

P on the vertex set V(G). Their definition is equivalent to

where TnBϵ(P)⊆V(G)n is the set of those sequences whose type (empirical distribution) is ϵ-close to P and G⊠n[TnBϵ(P)] is the subgraph induced by this subset. Some properties are more conveniently expressed in terms of C(G,P)=logΘ(G,P), which is also called the Shannon capacity.

In information theory, the independent sets in a type class are constant composition codes for zero-error communication, while similar notions in graph theory are sometimes called probabilistic refinements or “within a type” versions. To avoid proliferation of notations, we adopt the convention that graph parameters and their probabilistic refinements (defined using strong products) are denoted with the same symbol, even if alternative notation is in use elsewhere.

The aim of this paper is to gain a better understanding of Δ(G) by studying the probabilistic refinements of spectral points, focusing on those properties which follow from properties 4, 3, 2 and 1 and thus are shared by all of them. Some of these properties were already known to be true for specific ones.

Let f∈Δ(G). Then for any probabilistic graph (G,P) the limit

exists. Consider F(G,P)=logf(G,P) as a function F:Gprob→R. It satisfies the following properties:

Unsurprisingly, it turns out that the following counterpart of eq. 2 for probabilistic graphs is true:

We prove the following converse to Theorem 1.1.

Then f∈Δ(G) and its logarithmic probabilistic refinement is F.

Theorems 1.2 and 1.1 set up a bijection between Δ(G) and the set of functions satisfying properties 4, 3, 2 and 1. The inequalities defining the latter are affine, therefore it is a convex subset of the space of all functions on Gprob. Translating back to functions on G, it follows that e.g. the graph parameter

is an element of Δ(G). Moreover, the function f↦logf(G) is the maximum of affine functions for any fixed graph G, therefore it is convex. This allows us to find examples of graphs where a combined function like in eq. 9 gives a strictly better bound than the two spectral points involved.

In addition, we prove analogues of some of the properties that were previously known for specific spectral points. These include subadditivity with respect to the intersection; the value on the join of two graphs; and a characterization of multiplicativity under the lexicographic product. We introduce for each spectral point a complementary function and find a characterization of the Witsenhausen rate [Wit76] and of the complementary graph entropy [KL73].

1.2 Organization of this paper

In Section 2 we collect basic definitions and facts from graph theory and information theory, in particular those which are central to the method of types. Section 3 contains the proof of Theorems 1.2 and 1.1. In Section 4 we discuss a number of properties that have been known for specific spectral points and are true for all (or at least a large subset) of them. These include subadditivity under intersection of graphs with common vertex set and the behaviour under graph join and lexicographic product. We also put some notions related to graph entropy and complementary graph entropy into our more general context. In Section 5 we connect our results to the theory of convex corners.

Every graph in this paper is assumed to be a finite simple undirected graph. The vertex set of a graph G is V(G) and its edge set is E(G)⊆(V(G)2). The complement ¯¯¯¯G is the graph with the same vertex set and edge set E(G)=(V(G)2)∖E(G). Given a graph G and a subset S⊆V(G) the induced subgraph G[S] is the graph with vertex set V(G[S])=S and edge set E(G[S])=E(G)∩(S2). We write G⊆G′ when V(G)=V(G′) and E(G)⊆E(G′). This is a partial order and the complement operation is order reversing. The complete graph on a set S is KS, for S=[n] the notation is simplified to Kn.

The latter is a dense subset of P(X), equipped with the subspace topology from the Euclidean space RX. Bϵ(P) denotes the open ϵ-ball in P(X) centered at P with respect to the total variation distance.

For an n-type P∈Pn(X) the type class TnP⊆Xn is the set of strings in which x occurs exactly nP(x) times for all x∈X. More generally, for a subset U⊆P(X) we define

The (Shannon) entropy of a probability distribution P∈P(X) is

(justified by continuous extension). A special case is the entropy of a Bernoulli distribution,

we have the cardinality estimates

The relative entropy between two Bernoulli distributions is d(p∥q)=plogpq+(1−p)log1−p1−q, which satisfies d(p∥q)≥0.

When X and Y are finite sets and P≡PXY∈P(X×Y), the distributions PX∈P(X) and PY∈P(Y) given by

If f:X→Y is a function between finite sets and P∈P(X), then the pushforward is the distribution f∗(P)∈P(Y) defined as

The probabilistic refinement of a graph parameter Q:G→R≥0 is Q(G,P)=limϵ→0limn→∞n√Q(G⊠n[TnBϵ(P)]) whenever the limit exists, where G is a nonempty graph G and P∈P(V(G)). In particular, existence is guaranteed if Q is ⊠-supermultiplicative and nonincreasing under taking induced subgraphs. In all the examples in this paper, when P∈Pn(V(G)), this quantity is the same as limk→∞kn√Q(G⊠kn[TknP]).

In this section we prove Theorems 1.2 and 1.1. We let f be an arbitrary fixed element of Δ(G), the same symbol is used for its probabilistic refinement and F(G,P)=logf(G,P).

V(H) by vertex-transitivity. For fixed v and varying i these events are independent, therefore

We start with the first inequality. Both sides can be represented as induced subgraphs of G⊠(m+n), on the vertex sets TmP×TnQ and Tm+nmP+nQm+n, respectively. Since TmP×TnQ⊆Tm+nmP+nQm+n, the left hand side is an induded subgraph of the right hand side.

For the second inequality we apply Lemma 3.1 to the graph G⊠(m+n)[T(m+n)mP+nQm+n] and the subset TmP×TnQ of its vertex set. The upper bound on the resulting N follows from the (crude) estimate

This expression defines a uniformly continuous function F(G,⋅) on PQ(V(G)), therefore has a unique continuous extension to P(V(G)), which we denote by the same symbol. Moreover,

It is enough to establish existence of the limit and verify properties 4, 3, 2 and 1 on PQ(V(G)). Property 4 will then imply uniform continuity, hence existence of the continuous extension, which is unique since PQ(V(G)) is dense in P(V(G)).

because the sequence in the middle is a subsequence of the other two. Therefore the limit defines a function on PQ(V(G)).

Apply f, take the logarithm and divide by k(m+n) to get

This proves properties 3 and 2.

We add the two inequalities and rearrange:

Finally, divide by 1−λ and use the definition of λ:

The expression on the right hand side is symmetric in P and Q, therefore it is also an upper bound on the absolute value of the left hand side, which proves property 4. ∎

The route we followed is not the only way to arrive at the probabilistic refinement. We now state its equivalence with other common definitions.

For the proof see Appendix A.

For the proof see Appendix A.

The marginal types of any sequence in TnP are PG and PH, therefore (G⊠H)⊠n[TnP] is an induced subgraph of G⊠n[TnPG]⊠H⊠n[TnPH].

For the second inequality we apply Lemma 3.1 to the graph G⊠n[TnPG]⊠H⊠n[TnPH], which comes equipped with a transitive action of Sn×Sn. The upper bound on N can be seen from

By continuity, it is enough to verify the inequalities for distributions with rational probabilities. Let G,H be graphs and P∈Pn(V(G)×V(H)). Lemma 3.6 implies