Diffusion MRI is a neuroimaging technique measuring the anatomical structure of tissues. Using diffusion MRI to construct the connections of tissues, known as fiber tracking, is one of the most important uses of diffusion MRI. Many techniques are available recently but few properly quantify statistical uncertainties. In this paper, we propose a directed acyclic graph auto-regressive model of positive definite matrices and apply a probabilistic fiber tracking algorithm. We use both real data analysis and numerical studies to demonstrate our proposal. 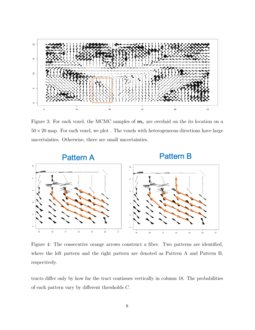 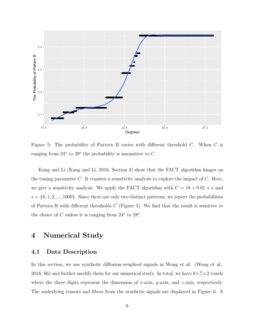 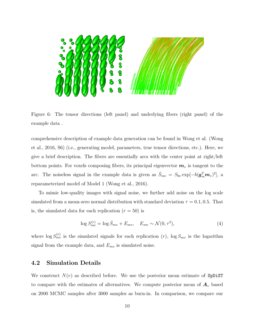 Among the many uses of diffusion MRI, using tractography methods to depict the underlying white matter fiber tracts of tissues may be the most important. Procedures of identifying tracts are referred as to fiber tracking. For clinical practice, fiber tracking provides potential benefits for presurgical planning (Chung et al., 2011). In neuroscience, understanding the anatomical connection of the brain is an important component of the connectome (Sporns et al., 2005).

Many technologies have been developed for fiber tracking in recent years. Among these methods, DiST (short for Diffusion Direction Smoothing and Tracking) (Wong et al., 2016) is one of the most prominent (Kang and Li, 2016; Schwartzman et al., 2016; Lazar et al., 2016). DiST

Although DiST has many appealing features, it has some limitations (Kang and Li, 2016; Lazar et al., 2016; Schwartzman et al., 2016). A major limitation may be that the separate steps of DiST

make it difficult to properly account for statistical uncertainties. In light of this, we propose a Bayesian hierarchical approach which allows valid statistical inference for fiber tracking. First, we assume that the logarithm signals follow a normal distribution, simplifying the model by avoiding the challenging Rician distribution

In the rest of the paper, we first introduce our method, referred as to SpDiST (short for Spatial Diffusion Direction Smoothing and Tracking). To demonstrate our proposal, we use both real data analysis and a simulation study. The real data analysis demonstrates that our proposal provides a valid and efficient means to quantify the uncertainties of fiber tracking. Moreover, the simulation study shows that our proposal produces accurate estimation. Finally, we conclude with a discussion.

In this section, we introduce the spatial tensor model based on directed acyclic graph auto-regression for positive definite matrices. The diffusion MRI has

The noiseless signal intensity ¯Smv can be expressed in terms of Av (Mori, 2007) as

In this expression, S0v, b, and gm are non-diffusion weighted intensity, scale parameter, and 3×1

unit-norm gradient vector, respectively. A detailed explanation of these three quantities can be found in Soares et al.

gv. For statistical modeling, S0v, b, and gm can simply be understood as fixed and known values.

The observations Smv are noisy realizations of ¯Smv. The Rician distribution (Wong et al., 2016) is reasonable for modeling Smv but it causes computational issues. Here, we assume that the noise is a multiplier to the ¯Smv and it follows a lognormal distribution. The model is

is the noise following a mean-zero normal distribution with variance

To induce spatial smoothness, an image is treated as a directed graph whose nodes are voxels and whose directed edges are from node v to nodes in N(v). Following Datta et al. (Datta et al., 2017), we use the directed acyclic graph (directed and no loops) to construct to N(v), leading to a valid joint density function of [A1,A2,...,An]. In particular, we assume that the conditional mean of Av is the average of its neighboring tensors, denoted as E[Av|Au,u∈N(v)]=1|N(v)|∑u∈N(v)Au, where N(v) is a set containing neighboring voxel indices of voxel v, and |N(v)| is the set size.

and degrees of freedom

k. Otherwise, conditional on Au,u∈N(v), we assume that Av follows a Wishart distribution with mean matrix ¯Av=1|N(v)|∑u∈N(v)Au and degrees of freedom k. The model is

In Equation (2), to preserve the designed mean realizations, we parameterize the Wishart distribution for X∼W(V,k) to have EX=V

. The probability density function is

where p is the matrix dimension and Γp(k2) is the multivariate gamma function.

We use MCMC for model fitting. We give k∼U(3,50) and σ−2∼GA(0.01,0.01). The primary challenge in the MCMC algorithm is to sample the posterior of Av. Since the prior of Av is not conjugate, we sample it using single-site Metropolis-Hastings sampling with Wishart distribution W(A′v|Av,q) as the proposal distribution. The algorithm is described below:

where ¯A∗u=∑u∈N(u)/vAu+A∗v|N(v)|. W(.|A,ν) and N(.|μ,σ2) are the density functions of Wishart distribution and normal distribution, respectively.

We use Metropolis-Hastings algorithm with log-normal random walk as proposal distribution to update the degrees of freedom q and use Gibbs sampling to update σ2 based on its posterior [σ−2|.]∼GA(Mn/2+0.01,∑m,v(logSmv−logS0v+bgTmAvgm)2/2+0.01).

. For each sample, we compute the principal eigenvector of

A(t)v, denoted as m(t)v. For each posterior draw, we use m(t)v as inputs of a fiber tracking algorithm. In this paper, we continue to use the Fiber Assignment by Continuous Tracking (FACT) (Mori et al., 1999), following Wong et al. (Wong et al., 2016). The algorithm can be stated as

Since we apply the algorithm for each posterior draw, the algorithm returns T possible fibers. We summarize K distinct patterns from the outputs and calculate the associated probability for pattern k∈{1,2,...,K} defined as TkT, where Tk is the frequency of the pattern k. This procedure is known as probabilistic fiber tracking and quantifies the uncertainties of fiber tracking result.

Since it is more efficient to visualize tensor directions in a 2D environment and the image is 2D, we focus on the first two dimensions of Av and compute the corresponding principal eigenvector mv. To quantify the uncertainties of tensor direction estimation in each voxel, we overlay the MCMC samples on a 50×20 map (Figure 3). In Figure 3, the voxels with heterogeneous directions have large uncertainties. Otherwise, there are small uncertainties.

Figure 3 only provides voxel-wise uncertainties but our fully-Bayesian approach can propagate spatial uncertainties through to uncertainty in fiber tracking. In this way, the MCMC-based SpDiST also provides a probabilistic approach to quantifying the uncertainties of fiber tracking. To have a concise and representative illustration, we focus on the region in the orange box of Figure 3. We apply the FACT algorithm as described in Section 2.2. In light of the conventions in setting the threshold C (Chung et al., 2011), we consider C ranging from 18o to 28o. There are two distinct patterns (Pattern A and Pattern B) for C∈[18o,28o] (Figure 4

) as dominating the posterior probability of the tract. These two tracts differ only by how far the tract continues vertically in column 18. The probabilities of each pattern vary by different thresholds

Kang and Li (Kang and Li, 2016, Section 3) show that the FACT algorithm hinges on the tuning parameter C. It requires a sensitivity analysis to explore the impact of C. Here, we give a sensitivity analysis. We apply the FACT algorithm with C=18+0.01×s and s={0,1,2,...,1000}. Since there are only two distinct patterns, we report the probabilities of Pattern B with different thresholds C (Figure 5). We find that the result is sensitive to the choice of C unless it is ranging from 24o to 28o.

In this section, we use synthetic diffusion-weighted signals in Wong et al. (Wong et al., 2016, S6) and further modify them for our numerical study. In total, we have 8×7×2 voxels where the three digits represent the dimension of x-axis, y-axis, and z-axis, respectively. The underlying tensors and fibers from the synthetic signals are displayed in Figure 6. A comprehensive description of example data generation can be found in Wong et al. (Wong et al., 2016, S6) (i.e., generating model, parameters, true tensor directions, etc.). Here, we give a brief description. The fibers are essentially arcs with the center point at right/left bottom points. For voxels composing fibers, its principal eigenvector mv is tangent to the arc. The noiseless signal in the example data is given as ¯Smv=S0vexp[−b(gTmmv)2], a reparameterized model of Model 1 (Wong et al., 2016).

To mimic low-quality images with signal noise, we further add noise on the log scale simulated from a mean-zero normal distribution with standard deviation

where logS(r)mv is the simulated signals for each replication (r), logSmv is the logarithm signal from the example data, and Emv is simulated noise.

We construct N(v) as described before. We use the posterior mean estimate of SpDiST to compare with the estimates of alternatives. We compute posterior mean of Av based on 2000 MCMC samples after 3000 samples as burn-in. In comparison, we compare our method to DiST. In addition, we also compare our method to a non-spatial method: the least squares method (Niethammer et al., 2006). The least squares method (Niethammer et al., 2006) is to estimate Av via

To quantify the performance of the three methods, we introduce two metrics. For voxels with fiber directions, we use Metric 1

where u,v are neighbors. A small d2(mv,^mu) leads to an accurate decision if two voxels belong to the same fiber.

We summarize the results in Table 1, including the mean estimates by averaging over 50

replications and the associated standard errors (in parentheses). From the result, we find that

SpDiST and DiST have an overall better performance in comparison to the non-spatial method. From Table 1, the SpDiST is more robust to noise, which may motivate a study on the robustness of tensor direction estimates based on different parameterization. However, the noise may have little effect on Metric 2, leading to the same fiber tracking results. Although the SpDiST and DiST have similar performance, however, the MCMC-based SpDiST provides a means to quantify the uncertainties of fiber tracking, unlike DiST.

In the numerical study, we find that DiST and SpDiST have similar performances. However, the MCMC-based SpDiST provides a probabilistic means to quantify the result of fiber tracking. This provides some potentially important information for neuroscientists to understand brain anatomical connection. Furthermore, we also give a sensitivity analysis to the tuning parameter C, addressing the issue raised by Kang and Li (Kang and Li, 2016).

Although the current methodologies might be sufficient for preliminary fiber tracking, there are still several issues. One problem is that the current methods focus on developing an imaging processing tool but not on scientifically and statistically explaining the outcomes (Lazar et al., 2016). However, proposing a statistical approach which characterizes factors affecting the outcomes might be critical in further studies, providing more insightful information in neuroscience. However, this is challenging because to incorporate covariates in the model and to properly combine the model to a fiber tracking algorithm are not straightforward. Another issue is crossing fibers. That is the single tensor model (Mori et al., 1999) fails to account for voxels where there are multiple fibers. Although it is assumed that increasing the resolution of the image may handle this issue, Schilling et al. (Schilling et al., 2017) give an unexpected result that increasing the resolution is not a solution. This needs to be rigorously studied with close interdisciplinary collaboration.