PρLog: a system for rule-based programming

In this paper, we give a brief overview of the rule-based programming system, called PρLog and illustrate its capabilities. 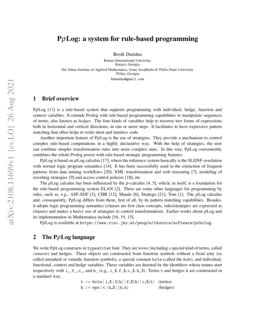 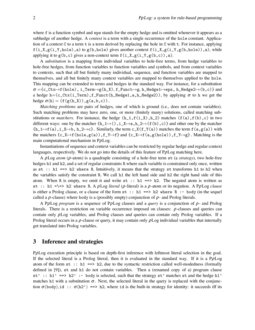 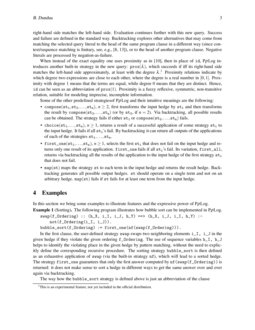 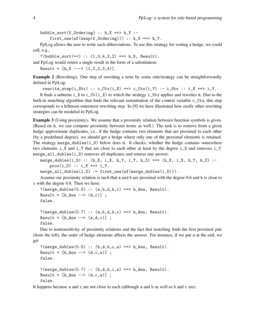 When rule-based models need to count

Towards Turkish ASR: Anatomy of a rule-based Turkish g2p

This paper describes the architecture and implementation of a rule-based...
Duygu Altinok, et al. ∙

In this article, we present a rule-based approach for transliterating tw...
Sina Ahmadi, et al. ∙

Rule-Based Systems have been in use for decades to solve a variety of pr...
Przemyslaw Woznowski, et al. ∙

Stemming has been an influential part in Information retrieval and searc...
Adel Rahimi, et al. ∙

is a rule-based system that supports programming with individual, sequence, function and context variables. It extends Prolog with rule-based programming capabilities to manipulate sequences of terms. The four kinds of variables help to traverse tree forms of expressions both in horizontal and vertical directions, in one or more steps. It facilitates to have expressive pattern matching that often helps to write short and intuitive code.

Another important feature of PρLog is the use of strategies. They provide a mechanism to control complex rule-based computations in a highly declarative way. With the help of strategies, the user can combine simpler transformation rules into more complex ones. In this way, PρLog conveniently combines the whole Prolog power with rule-based strategic programming features.

, where the inference system basically is the SLDNF-resolution with normal logic program semantics

[15]. It has been successfully used in the extraction of frequent patterns from data mining workflows [21], XML transformation and web reasoning [8], modeling of rewriting strategies [10] and access control policies [19], etc.

The ρLog calculus has been influenced by the ρ-calculus [5, 6], which, in itself, is a foundation for the rule-based programming system ELAN [3]. There are some other languages for programming by rules, such as, e.g., ASF-SDF [4], CHR [13], Maude [7], Stratego [22], Tom [2]. The ρLog calculus and, consequently, PρLog differs from them, first of all, by its pattern matching capabilities. Besides, it adopts logic programming semantics (clauses are first class concepts, rules/strategies are expressed as clauses) and makes a heavy use of strategies to control transformations. Earlier works about ρLog and its implementation in Mathematica include [17, 20, 16].

We write PρLog constructs in typewriter font. They are terms (including a special kind of terms, called contexts) and sequences. These objects are constructed from function symbols without a fixed arity (so called unranked or variadic function symbols), a special constant hole (called the hole), and individual, functional, context and sequence variables. These variables are denoted by the identifiers whose names start respectively with i_,f_,c_, and s_ (e.g., i_X,f_X,c_X,s_X). Terms t and sequences s are constructed in a standard way:

where f is a function symbol and eps stands for the empty sequence and is omitted whenever it appears as a subsequence of another sequence. A context is a term with a single occurrence of the hole constant. Application of a context C to a term t is a term derived by replacing the hole in C with t. For instance, applying f(i_X,g(i_Y,hole),a) to g(b,hole) gives another context f(i_X,g(i_Y,g(b,hole)),a), while applying it to g(b,c) gives a non-context term f(i_X,g(i_Y,g(b,c)),a).

Matching problems are pairs of sequences, one of which is ground (i.e., does not contain variables). Such matching problems may have zero, one, or more (finitely many) solutions, called matching substitutions or matchers. For instance, the sequence (s_1,f(i_X),s_2) matches (f(a),f(b),c) in two different ways: one by the matcher {s_1↦(),i_X↦a,s_2↦(f(b),c)} and other one by the matcher {s_1↦f(a),i_X↦b, s_2↦c}. Similarly, the term c_X(f_Y(a)) matches the term f(a,g(a)) with the matchers {c_X↦f(hole,g(a)),f_Y↦f} and {c_X↦f(a,g(hole)),f_Y↦g}. Matching is the main computational mechanism in PρLog.

Instantiations of sequence and context variables can be restricted by regular sequence and regular context languages, respectively. We do not go into the details of this feature of PρLog matching here.

A ρLog atom (ρ-atom) is a quadruple consisting of a hole-free term st (a strategy), two hole-free sequence s1 and s2, and a set of regular constraints R where each variable is constrained only once, written as st :: s1 ==> s2 where R. Intuitively, it means that the strategy st transforms s1 to s2 when the variables satisfy the constraint R. We call s1 the left hand side and s2 the right hand side of this atom. When R is empty, we omit it and write st :: s1 ==> s2. The negated atom is written as st :: s1 =\=> s2 where R. A ρLog literal (ρ-literal) is a ρ-atom or its negation. A PρLog clause is either a Prolog clause, or a clause of the form st :: s1 ==> s2 where R :- body (in the sequel called a ρ-clause) where body is a (possibly empty) conjunction of ρ- and Prolog literals.

PρLog execution principle is based on depth-first inference with leftmost literal selection in the goal. If the selected literal is a Prolog literal, then it is evaluated in the standard way. If it is a PρLog atom of the form st::s1==>s2, due to the syntactic restriction called well-modedness (formally defined in [10]), st and s1 do not contain variables. Then a (renamed copy of a) program clause st^{\prime}::s1^{\prime}==>s2^{\prime}:-body is selected, such that the strategy st^{\prime} matches st and the sequence s1’ matches s1 with a substitution σ. Next, the selected literal in the query is replaced with the conjunction σ(body),id::σ(s2^{\prime})==>s2, where id is the built-in strategy for identity: it succeeds iff its right-hand side matches the left-hand side. Evaluation continues further with this new query. Success and failure are defined in the standard way. Backtracking explores other alternatives that may come from matching the selected query literal to the head of the same program clause in a different way (since context/sequence matching is finitary, see, e.g., [9, 14]), or to the head of another program clause. Negative literals are processed by negation-as-failure.

When instead of the exact equality one uses proximity as in [11], then in place of id, PρLog introduces another built-in strategy in the new query: prox(λ), which succeeds if its right-hand side matches the left-hand side approximately, at least with the degree λ.111This is an experimental feature, not yet included in the official distribution. Proximity relations indicate by which degree two expressions are close to each other, where the degree is a real number in [0,1]. Proximity with degree 1 means that the terms are equal, while degree 0 means that they are distinct. Hence, id can be seen as an abbreviation of prox(1). Proximity is a fuzzy reflexive, symmetric, non-transitive relation, suitable for modeling imprecise, incomplete information.

Some of the other predefined strategies of PρLog and their intuitive meanings are the following:

In this section we bring some examples to illustrate features and the expressive power of PρLog.

The following program illustrates how bubble sort can be implemented in PρLog.

In the first clause, the user-defined strategy swap swaps two neighboring elements i_I,i_J in the given sequence if they violate the given ordering f_Ordering. The use of sequence variables s_I,s_J helps to identify the violating place in the given sequence by pattern matching, without the need to explicitly define the corresponding recursive procedure. The sorting strategy bubble_sort is then defined as an exhaustive application of swap (via the built-in strategy nf), which will lead to a sorted sequence. The strategy first_one guarantees that only the first answer computed by nf(swap(f_Ordering)) is returned: it does not make sense to sort a sequence in different ways to get the same answer over and over again via backtracking.

PρLog allows the user to write such abbreviations. To use this strategy for sorting a sequence, we could call, e.g.,

and PρLog would return a single result in the form of a substitution:

One step of rewriting a term by some rule/strategy can be straightforwardly defined in PρLog:

It finds a subterm i_X in c_Ct(i_X) to which the strategy i_Str applies and rewrites it. Due to the built-in matching algorithm that finds the relevant instantiation of the context variable c_Ctx, this step corresponds to a leftmost-outermost rewriting step. In [10] we have illustrated how easily other rewriting strategies can be modeled in PρLog.

We assume that a proximity relation between function symbols is given. (Based on it, we can compute proximity between terms as well.) The task is to remove from a given sequence approximate duplicates, i.e., if the sequence contains two elements that are proximal to each other (by a predefined degree), we should get a sequence where only one of the proximal elements is retained. The strategy merge_proximals below does it. It checks whether the sequence contains somewhere two elements i_X and i_Y that are close to each other at least (by the given degree) and removes i_X. merge_all_proximals removes all such approximate duplicates and returns one answer:

Assume our proximity relation is such that a and b are proximal with degree 0.6 and b is close to c with degree 0.8. (Every symbol is proximal to itself with degree 1.) Then we can ask to merge all proximals in the sequence (a,b,d,b,c) first by degree 0.5 and then by degree 0.7. The resulted answers show the result sequence and the actual approximation degree (which is ≥ the given degree):

Due to nontransitivity of proximity relations and the fact that matching finds the first proximal pair (from the left), the order of sequence elements affects the answer. For instance, if we put a at the end, we get

It happens because a and c are not close to each (although a and b as well as b and c are).

The main advantages of PρLog are: compact and declarative code; capabilities of expression traversal without explicitly programming it; the ability to use clauses in a flexible order with the help of strategies. Besides, PρLog has access to the whole infrastructure of its underline Prolog system. These features make PρLog suitable for nondeterministic computations, manipulating XML documents, implementing rule-based algorithms and their control, etc.

This work has been supported by the Shota Rustaveli National Science Foundation of Georgia under the grant YS-18-1480.