We present a novel privacy-preserving scheme for deep neural networks (DNNs) that enables us not to only apply images without visual information to DNNs for both training and testing but to also consider data augmentation in the encrypted domain for the first time. In this paper, a novel pixel-based image encryption method is first proposed for privacy-preserving DNNs. In addition, a novel adaptation network is considered that reduces the influence of image encryption. In an experiment, the proposed method is applied to a well-known network, ResNet-18, for image classification. The experimental results demonstrate that conventional privacy-preserving machine learning methods including the state-of-the-arts cannot be applied to data augmentation in the encrypted domain and that the proposed method outperforms them in terms of classification accuracy. 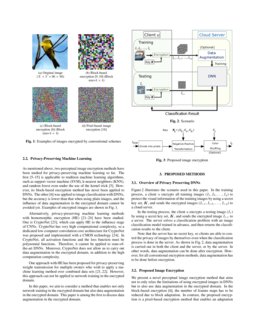 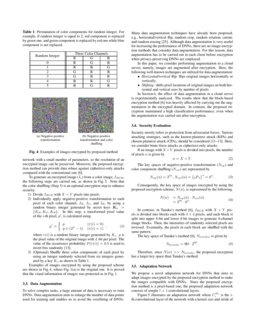 The spread of deep neural networks (DNNs) has greatly contributed to solving complex tasks for many applications[1, 2]

, such as for computer vision, biomedical systems, and information technology. Deep learning utilizes a large amount of data to extract representations of relevant features, so the performance is significantly improved

[3, 4]. However, there are security issues when using deep learning in cloud environments to train and test data, such as data privacy, data leakage, and unauthorized data access. Therefore, privacy-preserving DNNs have become an urgent challenge.

In this paper, we propose a novel privacy-preserving method for DNNs that enables us to not only apply images without visual information to DNNs for both training and testing but to also carry out data augmentation in the encrypted domain for the first time. Data augmentation, which is a technique for creating new training data from existing data, is widely used in DNN-based methods because it is easy to implement and is effective. Augmented data can be utilized to improve model robustness and increase accuracy. Since augmentation produces a huge amount of data, it is required that it has to be performed on a cloud server in order to reduce the amount of data traffic. This paper is among the first to discuss data augmentation in the encrypted domain.

Various methods have been proposed for privacy-preserving computation. The methods are classified into two types: perceptual encryption-based

to be proposed for encryption-then-compression (EtC) systems, was demonstrated to be applicable to traditional machine learning algorithms, such as support vector machine (SVM)

[5]. However, the block-based encryption method has never been applied to DNNs. Another method[6] was applied to image classification with DNNs, in which an adaption network is added prior to DNNs to avoid the influence of image encryption. However, the accuracy of image classification is lower than that of using plain images, and, moreover, data augmentation in the encrypted domain cannot be applied to the conventional method.

Security mostly refers to protection from adversarial forces. This paper focuses on protecting visual information that allows us to identify an individual, the time, and the location of the taken photograph. Untrusted platforms and unauthorized users are assumed to be adversaries.

Various perceptual image encryption methods[5, 6, 7, 8, 9, 10, 14, 13, 11, 12, 15, 16] have been proposed for protecting the visual information of images. Compared with full encryption with provable security like homomorphic encryption (HE), they generally have a low computational cost and can offer encrypted data robust against various kinds of noise and errors. In addition, some of them aim to consider both security and efficient compression so that they can be adapted to cloud storage and network sharing [9, 10, 14, 13, 11, 12, 15]. However, with the exception of a few previous pieces of work, most conventional perceptual encryption methods have never been considered for application to machine learning algorithms[5, 6].

is applicable to tradition machine learning algorithms, such as support vector machine (SVM), k-nearest neighbors (KNN), and random forest even under the use of the kernel trick

[5]. However, its block-based encryption method has never been applied to DNNs. The other[6] was applied to image classification with DNNs, but the accuracy is lower than that when using plain images, and the influence of data augmentation in the encrypted domain cannot be avoided yet. Examples of encrypted images are shown in Fig. 1.

Alternatively, privacy-preserving machine learning methods with homomorphic encryption (HE) [21, 22, 23, 24] have been studied. One is CryptoNet[23], which can apply HE to the influence stage of CNNs. CryptoNet has very high computational complexity, so a dedicated low computer convolution core architecture for CryptoNet was proposed and implemented with a CMOS technology[24]

. In CryptoNet, all activation functions and the loss function must be polynomial functions. Therefore, it cannot be applied to state-of-the-art DNNs. Moreover, CryptoNet does not allow us to carry out data augmentation in the encrypted domain, in addition to the high computation complexity.

One approach with HE has been proposed for privacy-preserving weight transmission for multiple owners who wish to apply a machine learning method over combined data sets[21, 22]. However, this approach can not be applied to network training in the encrypted domain.

Figure 2 illustrates the scenario used in this paper. In the training process, a client u encrypts all training images (I1,I2,…,Ig) to protect the visual information of the training images by using a secret key set, K, and sends the encrypted images (Ie,1,Ie,2,…,Ie,g) to a cloud server.

In the testing process, the client u encrypts a testing image (Iv) by using a secret key set, K, and sends the encrypted image Ie,v to a server. The server solves a classification problem with an image classification model trained in advance, and then returns the classification results to the client.

To generate an encrypted image (Ie) from a color image, IRGB, the following steps are carried out, as shown in Fig. 3. Note that the color shuffling (Step 3) is an optional encryption step to enhance security.

Examples of images encrypted by using the proposed scheme are shown in Fig. 4, where Fig. 1(a) is the original one. It is proved that the visual information of images was protected as in Fig. 1.

To solve complex tasks, a large amount of data is necessary to train DNNs. Data augmentation aims to enlarge the number of data points used for training and enables us to avoid the overfitting of DNNs. Many data augmentation techniques have already been proposed, e.g., horizontal/vertical flip, random crop, random rotation, cutout, and random erasing[25]. Although data augmentation is very useful for increasing the performance of DNNs, there are no image encryption methods that consider data augmentation. For this reason, data augmentation has to be carried out in each client before encryption when privacy-preserving DNNs are employed.

In this paper, we consider performing augmentation in a cloud server, namely, images are augmented after encryption. Here, the following well-known techniques are utilized for data augmentation:

Security mostly refers to protection from adversarial forces. Various attacking strategies, such as the known-plaintext attack (KPA) and chosen-plaintext attack (CPA), should be considered[13, 11, 12]. Here, we consider brute-force attacks as ciphertext-only attacks.

If an image with X×Y pixels is divided into pixels, the number of pixels n is given by

Consequently, the key space of images encrypted by using the proposed encryption scheme, N(n), is represented by the following.

In contrast, in Tanaka’s method[6], IRGB with X×Y pixels is divided into blocks each with 4×4 pixels, and each block is split into upper 4-bit and lower 4-bit images to generate 6-channel image blocks. Then, the intensities of randomly selected pixels are reversed. Eventually, the pixels in each block are shuffled with the same pattern.

The key space of Tanaka’s method[6], Ntanaka, is given by

Therefore, since N(n)>>Ntanaka, the proposed encryption has a larger key space than Tanaka’s method.

Figure 5 illustrates an adaptation network where CMii is the i

-th convolutional layer of the network with a kernel size and stride of (1,1) , and

Mi is the number of feature maps of the i-th convolutional layer.

To confirm that the proposed scheme is effective, we evaluated the performance in terms of image classification accuracy and compared it with conventional privacy-preserving methods.

We employed CIFAR10, which contains 32×32 pixel color images and consists of 50,000 training images and 10,000 test images in 10 classes[26]. For preprocessing, standard data augmentation (shifting and random horizontal flip) was used.

The proposed encryption was used to encrypt all training and testing images, and networks were then trained and tested by using the encrypted images, as shown in Fig. 2. In the experiment, the numbers of feature maps, M1 and M2, were set to 8 and 32, respectively, and we evaluated the image classification accuracy of encrypted images under the use of ResNet-18[27, 28], which consists of 18 layers.

A Data Augmentation in Cloud Server

B Data Augmentation in Client or Cloud Server

We presented a novel privacy preserving scheme for DNNs that enables us not only to use encrypted images on DNNs but to also use data augmentation in the encrypted domain. This paper was the first to discuss data augmentation in the encrypted domain. Novel pixel-based image encryption was proposed to protect the visual information of images and is available for training and testing DNNs. In addition, we proposed a novel adaptation network that enhances the classification performance of DNNs by obtaining representations of each pixel before passing through state-of-the-art DNNs. The experimental results showed that the proposed scheme performed better in classification than did the conventional block-based and pixel-based encryption schemes. In addition, it was proved that the proposed encryption allows us to use data augmentation in the encrypted domain. As a result, the advantages of data augmentation for enhancing the performance of DNNs can be efficiently utilized even when visual information is protected.