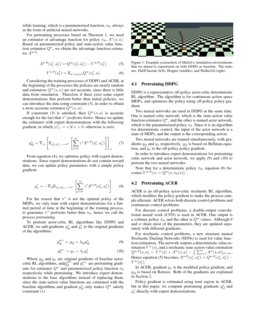 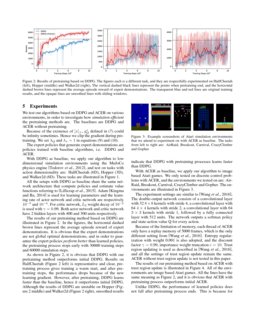 A learning dialogue agent can infer its behaviour from interactions with...
Thibault Cordier, et al. ∙

In this paper we investigate some of the issues that arise from the scal...
Federico A. Galatolo, et al. ∙

Deep reinforcement learning is a general method that have been successful in solving complex control problems. Mnih et al. in [Mnih et al.2015]

combined Q learning with deep neural networks and proved to be successful in image based Atari games.

One of the representative method of learning from expert demonstrations is inverse reinforcement learning. Ng et al. proposed the first inverse reinforcement learning algorithm [Ng and Russell2000], which recovers reward function based on the assumption that the expert policy is the global optimal policy. From recovered reward function, Abbeel et al. are able to propose apprenticeship learning ([Abbeel and Ng2004]) to train a policy with expert demonstrations and a simulation environment that does not output reward. Apprenticeship learning inspired many similar algorithms ([Syed and Schapire2008], [Syed et al.2008], [Piot et al.2014], [Ho et al.2016]), Ho et al. [Ho and Ermon2016a]

focused on feature extracting for high dimensional, especially image based simulation environments, and proposed a framework for discrete control problems that pretrains the neural networks with classification tasks using supervised learning. The purpose of this pretraining process is to speed up the training process by trying to extract features of high dimensional states. However, this work is only suitable for image based, discrete action environments, and ignored the fact that expert demonstrations perform better than current learned policies.

In this paper, we deal with an infinite-horizon discounted Markov Decision Process (MDP), which is defined by the tuple

is the transition probability distribution,

r:S→R is the reward function, ρ0:S→R is the probability distribution of initial state S0, and γ∈(0,1) is the discount factor.

The definitions of the value function Vπ and the advantage function Aπ are:

And let η(π) denote the discounted reward of π:

where in all of the definitions above:

The goal of actor-critic reinforcement learning algorithms is to maximize the discounted reward, η(π), to obtain the optimal policy, where we use a parameterized policy πθ. While estimating η(π) or ∇θη(πθ) based on simulated samples, many algorithms use a state-action value estimator Qw, to estimate the state-value function Qπ for policy function πθ.

Where Qw is updated with sampled data from π using Bellman equation, π′θ=∇θπθ(s)|s=st.

Another off-policy algorithm that has Qw as an estimator of policy πθ is ACER (Actor-Critic with Experience Replay) [Wang et al.2016] that optimizes stochastic policy. The algorithm maximizes off-policy deterministic discounted reward ηβ(πθ) as well, and modifies the off-policy policy gradient ^gacer=∇θηβ(π) to:

In this paper, we will apply our methods with expert demonstrations to DDPG and ACER.

Suppose there exists an expert policy π∗ that performs better than π. We define perform better with the following straightforward constraint:

The definition of perform better above is based on the fact that the goal of actor-critic RL algorithms is to maximize η(π). Here the expert policy π∗ is different from that of IRL [Ng and Russell2000], imitation learning [Ho and Ermon2016b] or LfD [Hester et al.2017], since π∗ here is not the optimum policy of the MDPs.

However, With only demonstrations of expert policy π∗ and a black-box simulation environment, η(π∗) and η(πθ) cannot be directly estimated. Hence we introduce Theorem 1 (see [Schulman et al.2015] and [Kakade and Langford2002]).

For many actor-critic RL algorithms like DDPG and ACER, policy optimization is based on accurate estimations of state-action value functions or value functions of the learned policy πθ. Typically, those algorithms use data sampled from πθ, {(st,at,rt)}t=0,1,2,..., to estimate Qπ and Vπ. The estimating processes usually need a large amount of simulations to be accurate enough.

Combine Theorem 1 with constraint (1), we have:

Considering Theorem 1, we estimate he policy gradient as the following:

Equation (4) provides an off-policy policy optimization procedure with data only from expert demonstrations. It turns out that perform better is not a must in this procedure for expert policy π∗.

Recently, people like to propose sample efficient RL algorithms, like ACER and Q-Prop [Gu et al.2017], since RL algorithms need a large amount of simulation time while training. With expert demonstrations, since there is no reward data, we cannot conduct sample efficient policy optimization processes. However, when we update policies with (4), no simulation time is needed. We call the situation simulation efficient, which means the algorithms may need a large amount of data, but need few simulation data while training.

In this section, we found two pretraining methods for actor-critic RL algorithms, namely (3) and (4). Both of them are based on Theorem 1. The theorem connects policy discounted reward η(πθ) and expert demonstration data, requiring no reward data from expert trajectories. Equation (3) gives a constraint of value function estimators based on the definition of perform better, and equation (4) provides an off-policy method to optimize policy function regardless of how expert demonstrations perform.

Theorem 1 provides a way to satisfy constraint (1) and update policies πθ with demonstrations of expert policy π∗, and does not need reward data sampled from π∗. In this section, we organize the results in Section 3 in a more piratical way, then we apply the pretraining methods to two of the typical actor-critic RL algorithms, DDPG and ACER.

These actor-critic RL algorithms use neural networks Qw(s,a) to estimate the state-action value functions of policy, Qπ(s,a), where π is the is the current learned policy while training, which is a parameterized function, πθ, always in the form of artificial neural networks.

Considering the training processes of DDPG and ACER, at the beginning of the processes the policies are nearly random and estimators Qw(s,a) are not accurate, since there is little data from simulation. Therefore if there exist some expert demonstrations that perform better than initial policies, we can introduce the data using constraint (3), in order to obtain a more accurate estimator Qw(s,a).

If constraint (3) is satisfied, then Qw(s,a) is accurate enough for the fact that π∗ performs better. Hence we update the estimator with expert demonstrations with the following gradient, in which [x]+=x if x>0, otherwise is zero:

For the reason that π∗ is not the optimal policy of the MDPs, we only train with expert demonstrations for a limited period of time at the beginning of the training process, to guarantee π∗ performs better than πθ, hence we call the process pretraining.

To pretrain actor-critic RL algorithms like DDPG and ACER, we add gradients g∗Q and g∗π to the original gradients of the algorithms:

Where gQ and gπ are original gradients of baseline actor-critic RL algorithms, andgpreQ and gpreπ are pretraining gradients for estimator Qw and parameterized policy function πθ respectively while pretraining. We introduce expert demonstrations to the base algorithms instead of replacing them, since the state-action value functions are estimated with the baseline algorithms and gradient g∗Q only makes Qw satisfy constraint (1).

Two neural networks are trained simultaneously, with gradients gQ and gπ respectively. gQ is based on Bellman equation, and gπ is the off-policy policy gradient.

In order to introduce expert demonstrations for pretraining critic network and actor network, we apply (9) and (10) to pretrain the two neural networks.

For discrete control problems, a double-output convolutional neural work (CNN) is used in ACER. One output is a softmax policy πθ, and the other is Qw values. Although θ and w share most of the parameters, they are updated separately with different gradients.

In ACER, gradient gπ is the modified policy gradient, and gQ is based on Retrace. Both of the gradients are explained in Section 2.

Policy gradient is estimated using trust region in ACER, but in this paper, we compute pretraining gradients g∗Q and g∗π directly with expert demonstrations.

We test our algorithms based on DDPG and ACER on various environments, in order to investigate how simulation efficient the pretraining methods are. The baselines are DDPG and ACER without pretraining.

Because of the existence of [x]+, g∗Q defined in (7) could be infinity sometimes. Hence we clip the gradient during pretraining. We set λQ and λπ=1 in equations (9) and (10).

With DDPG as baseline, we apply our algorithm to low dimensional simulation environments using the MuJoCo physics engine [Todorov et al.2012], and test on tasks with action dimensionality are: HalfCheetah (6D), Hopper (3D), and Walker2d (6D). These tasks are illustrated in Figure 1.

As shown in Figure 2, it is obvious that DDPG with our pretraining method outperforms initial DDPG. Results on HalfCheetah (Figure 2 left) is representative and clear, pretraining process gives training a warm start, and after pretraining stops, the performance drops because of the new learning gradient. However, after pretraining, DDPG learns faster than the baseline, hence it outperforms initial DDPG. Although the results of DDPG are unstable on Hopper (Figure 2 middle) and Walker2d (Figure 2 right), smoothed results indicate that DDPG with pretraining processes learns faster than DDPG.

With ACER as baseline, we apply our algorithm to image based Atari games. We only tested on discrete control problems with ACER, and the environments we tested on are: AirRaid, Breakout, Carnival, CrazyClimber and Gopher. The environments are illustrated in Figure 3.

The experiment settings are similar to [Wang et al.2016], The double-output network consists of a convolutional layer with 32 8×8

kernels with stride 4, a convolutional layer with 64

The results of our pretraining method based on ACER with trust region update is illustrated in Figure 4. All of the environments are image based Atari games. All the lines have the same meaning as Figure 2, and it is obvious that ACER with pretraining process outperforms initial ACER.

Note that learning with expert demonstrations use the same amount of simulation steps as baseline algorithms, our pretraining method is more simulation efficient than baselines.

In this work, we propose an extensive method that pretrains actor-critic reinforcement learning methods. Based on Theorem 1, we design a method that takes advantage of expert demonstrations. Our method does not rely on the global optimal assumption of expert demonstrations, which is one of the key differences between our method and IRL algorithms. Our method pretrains policy function and state-action value estimators simultaneously with gradients (9) and (10). With experiments based on DDPG and ACER, we demonstrate that our method outperforms the raw RL algorithms.

One limitation of our framework is that it has to estimate the advantage function for expert demonstrations, and the framework is not suitable for algorithms like A3C [Mnih et al.2016] and TRPO [Schulman et al.2015] that only maintain a value estimator Vw(s). On the other hand, the fact that expert demonstrations perform better is not considered during pretraining of policies (Equation (8)). We left these extensions in our future work.