Although pretrained Transformers such as BERT achieve high accuracy on in-distribution examples, do they generalize to new distributions? We systematically measure out-of-distribution (OOD) generalization for various NLP tasks by constructing a new robustness benchmark with realistic distribution shifts. We measure the generalization of previous models including bag-of-words models, ConvNets, and LSTMs, and we show that pretrained Transformers' performance declines are substantially smaller. Pretrained transformers are also more effective at detecting anomalous or OOD examples, while many previous models are frequently worse than chance. We examine which factors affect robustness, finding that larger models are not necessarily more robust, distillation can be harmful, and more diverse pretraining data can enhance robustness. Finally, we show where future work can improve OOD robustness. 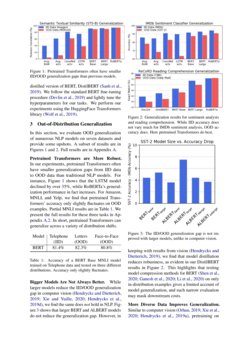 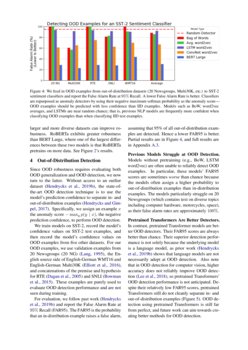 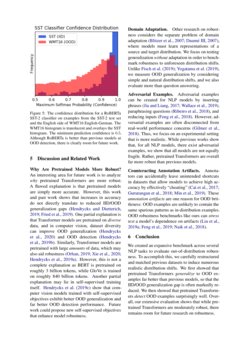 How Effective is Task-Agnostic Data Augmentation for Pretrained Transformers?

Most applications of transformers to mathematics, from integration to th...
François Charton, et al. ∙

On the Limitations of Sociodemographic Adaptation with Transformers

The train and test distributions are often not identically distributed. Such train-test mismatches occur because evaluation datasets rarely characterize the entire distribution Torralba and Efros (2011), and the test distribution typically drifts over time Quionero-Candela et al. (2009). Chasing an evolving data distribution is costly, and even if the training data does not become stale, models will still encounter unexpected situations at test time. Accordingly, models must generalize to OOD examples whenever possible, and when OOD examples do not belong to any known class, models must detect them in order to abstain or trigger a conservative fallback policy Emmott et al. (2015).

Most evaluation in natural language processing (NLP) assumes the train and test examples are independent and identically distributed (IID). In the IID setting, large pretrained Transformer models can attain near human-level performance on numerous tasks

. However, high IID accuracy does not necessarily translate to OOD robustness for image classifiers

In this work, we systematically study the OOD robustness of various NLP models, such as word embeddings averages, LSTMs, pretrained Transformers, and more. We decompose OOD robustness into a model’s ability to (1) generalize and to (2) detect OOD examples Card et al. (2018).

To measure OOD generalization, we create a new evaluation benchmark that tests robustness to shifts in writing style, topic, and vocabulary, and spans the tasks of sentiment analysis, textual entailment, question answering, and semantic similarity. We create OOD test sets by splitting datasets with their metadata or by pairing similar datasets together (Section

2 How We Test Robustness

We evaluate OOD generalization with seven carefully selected datasets. Each dataset either (1) contains metadata which allows us to naturally split the samples or (2) can be paired with a similar dataset from a distinct data generating process. By splitting or grouping our chosen datasets, we can induce a distribution shift and measure OOD generalization.

We also utilize these datasets for semantic similarity, reading comprehension, and textual entailment:

We evaluate NLP models with different input representations and encoders. We investigate three model categories with a total of thirteen models.

, which is high-bias but low-variance, so it may exhibit performance stability. The BoW model is only used for sentiment analysis and STS-B due to its low performance on the other tasks. For STS-B, we use the cosine similarity of the BoW representations from the two input sentences.

, and Convolutional Neural Networks (ConvNets). For classification tasks, the representation from the encoder is fed into an MLP. For STS-B and MNLI, we use the cosine similarity of the encoded representations from the two input sentences. For reading comprehension, we use the DocQA model

Clark and Gardner (2018) with GloVe embeddings. We implement our models in AllenNLP Gardner et al. (2018)

and tune the hyperparameters to maximize validation performance on the IID task.

In this section, we evaluate OOD generalization of numerous NLP models on seven datasets and provide some upshots. A subset of results are in Figures 1 and 2. Full results are in Appendix A.

Bigger Models Are Not Always Better.

While larger models reduce the IID/OOD generalization gap in computer vision Hendrycks and Dietterich (2019); Xie and Yuille (2020); Hendrycks et al. (2019d), we find the same does not hold in NLP. Figure 3 shows that larger BERT and ALBERT models do not reduce the generalization gap. However, in keeping with results from vision Hendrycks and Dietterich (2019), we find that model distillation can reduce robustness, as evident in our DistilBERT results in Figure 2. This highlights that testing model compression methods for BERT Shen et al. (2020); Ganesh et al. (2020); Li et al. (2020) on only in-distribution examples gives a limited account of model generalization, and such narrow evaluation may mask downstream costs.

Similar to computer vision Orhan (2019); Xie et al. (2020); Hendrycks et al. (2019a), pretraining on larger and more diverse datasets can improve robustness. RoBERTa exhibits greater robustness than BERT Large, where one of the largest differences between these two models is that RoBERTa pretrains on more data. See Figure 2’s results.

Since OOD robustness requires evaluating both OOD generalization and OOD detection, we now turn to the latter. Without access to an outlier dataset

We train models on SST-2, record the model’s confidence values on SST-2 test examples, and then record the model’s confidence values on OOD examples from five other datasets. For our OOD examples, we use validation examples from 20 Newsgroups (20 NG) Lang (1995), the English source side of English-German WMT16 and English-German Multi30K Elliott et al. (2016), and concatenations of the premise and hypothesis for RTE Dagan et al. (2005) and SNLI Bowman et al. (2015). These examples are only used during OOD evaluation not training.

Models without pretraining (e.g., BoW, LSTM word2vec) are often unable to reliably detect OOD examples. In particular, these models’ FAR95 scores are sometimes worse than chance because the models often assign a higher probability to out-of-distribution examples than in-distribution examples. The models particularly struggle on 20 Newsgroups (which contains text on diverse topics including computer hardware, motorcycles, space), as their false alarm rates are approximately 100%.

Why Are Pretrained Models More Robust?

Other research on robustness considers the separate problem of domain adaptation Blitzer et al. (2007); Daumé III (2007), where models must learn representations of a source and target distribution. We focus on testing generalization without adaptation in order to benchmark robustness to unforeseen distribution shifts. Unlike Fisch et al. (2019); Yogatama et al. (2019), we measure OOD generalization by considering simple and natural distribution shifts, and we also evaluate more than question answering.

We created an expansive benchmark across several NLP tasks to evaluate out-of-distribution robustness. To accomplish this, we carefully restructured and matched previous datasets to induce numerous realistic distribution shifts. We first showed that pretrained Transformers generalize to OOD examples far better than previous models, so that the IID/OOD generalization gap is often markedly reduced. We then showed that pretrained Transformers detect OOD examples surprisingly well. Overall, our extensive evaluation shows that while pretrained Transformers are moderately robust, there remains room for future research on robustness.

We thank the members of Berkeley NLP, Sona Jeswani, Suchin Gururangan, Nelson Liu, Shi Feng, the anonymous reviewers, and especially Jon Cai. This material is in part based upon work supported by the National Science Foundation Frontier Award 1804794. Any opinions, findings, and conclusions or recommendations expressed in this material are those of the author(s) and do not necessarily reflect the views of the National Science Foundation.

We observe more minor performance declines for the Amazon, MNLI, and Yelp datasets. Figure 6 shows the Amazon results for BERT Base, Table 5 shows the MNLI results, and Table 6 shows the Yelp results.

Full FAR95 values are in Table 7. We also report the Area Under the Receiver Operating Characteristic (AUROC) Hendrycks and Gimpel (2017). The AUROC is the probability that an OOD example receives a higher anomaly score than an in-distribution example, viz.,