There is an increasing convergence between biologically plausible computational models of inference and learning with local update rules and the global gradient-based optimization of neural network models employed in machine learning. One particularly exciting connection is the correspondence between the locally informed optimization in predictive coding networks and the error backpropagation algorithm that is used to train state-of-the-art deep artificial neural networks. Here we focus on the related, but still largely under-explored connection between precision weighting in predictive coding networks and the Natural Gradient Descent algorithm for deep neural networks. Precision-weighted predictive coding is an interesting candidate for scaling up uncertainty-aware optimization – particularly for models with large parameter spaces – due to its distributed nature of the optimization process and the underlying local approximation of the Fisher information metric, the adaptive learning rate that is central to Natural Gradient Descent. Here, we show that hierarchical predictive coding networks with learnable precision indeed are able to solve various supervised and unsupervised learning tasks with performance comparable to global backpropagation with natural gradients and outperform their classical gradient descent counterpart on tasks where high amounts of noise are embedded in data or label inputs. When applied to unsupervised auto-encoding of image inputs, the deterministic network produces hierarchically organized and disentangled embeddings, hinting at the close connections between predictive coding and hierarchical variational inference. 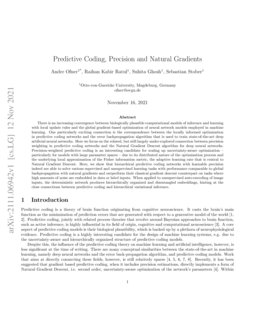 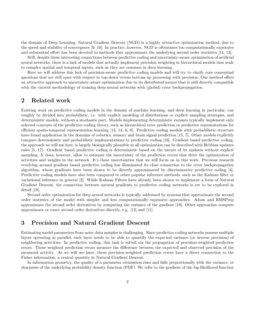 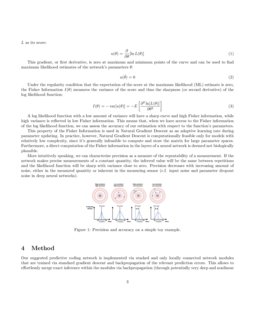 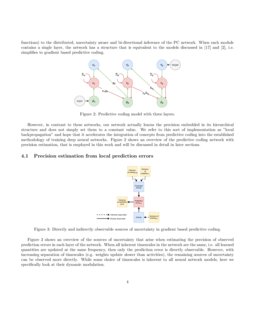 On the relationship between predictive coding and backpropagation

Despite this, the influence of the predictive coding theory on machine learning and artificial intelligence, however, is less significant at the time of writing. There are many conceptual similarities between the state-of-the-art in machine learning, namely deep neural networks and the error back-propagation algorithm, and predictive coding models. Work that aims at directly connecting these fields, however, is still relatively sparse

. Recently, it has been suggested that gradient based predictive coding, when it includes precision estimations, directly implements a form of Natural Gradient Descent, i.e. second order, uncertainty-aware optimization of the network’s parameters

. Within the domain of Deep Learning, Natural Gradient Descent (NGD) is a highly attractive optimization method, due to the speed and stability of convergence

[rattray1998natural, kunstner2019limitations]. In practice, however, NGD is oftentimes too computationally expensive and substantial effort has been devoted to methods that approximate the underlying second order statistics [yao2020adahessian, zeiler2012adadelta].

Still, despite these interesting connections between predictive coding and uncertainty-aware optimization of artificial neural networks, there is a lack of models that actually implement precision weighting in hierarchical models that scale to complex spatial and temporal inputs, such as they are common in deep learning.

Here we will address this lack of precision-aware predictive coding models and will try to clarify core conceptual questions that are still open with respect to top-down versus bottom-up processing with precision. Our method offers an attractive approach to uncertainty-aware optimization due to its distributed nature that is still directly compatible with the current methodology of training deep neural networks with (global) error backpropagation.

. Predictive coding models have also been compared to other popular inference methods, such as the Kalman filter or variational inference in general

[millidge2021predictivereview]. While Kalman Filters have already been shown to implement a form of Natural Gradient Descent, the connection between natural gradients to predictive coding networks is yet to be explored in detail [ollivier2018online].

In information geometry, the quality of a parameter estimation rises and falls proportionally with the variance, or sharpness of the underlying probability density function (PDF). We refer to the gradient of the log-likelihood function

L as its score:

This gradient, or first derivative, is zero at maximum and minimum points of the curve and can be used to find maximum likelihood estimates of the network’s parameters θ:

Under the regularity condition that the expectation of the score at the maximum likelihood (ML) estimate is zero, the Fisher Information I(θ) measures the variance of the score and thus the sharpness (or second derivative) of the log likelihood function:

This property of the Fisher Information is used in Natural Gradient Descent as an adaptive learning rate during parameter updating. In practice, however, Natural Gradient Descent is computationally feasible only for models with relatively low complexity, since it’s generally infeasible to compute and store the matrix for large parameter spaces. Furthermore, a direct computation of the Fisher information in the layers of a neural network is deemed not biologically plausible.

More intuitively speaking, we can characterize precision as a measure of the repeatability of a measurement. If the network makes precise measurements of a constant quantity, the inferred value will be the same between repetitions and the likelihood function will be sharp with variance close to zero. Precision decreases with increasing amount of noise, either in the measured quantity or inherent in the measuring sensor (c.f. input noise and parameter dropout noise in deep neural networks).

Our suggested predictive coding network is implemented via stacked and only locally connected network modules that are trained via standard gradient descent and backpropagation of the relevant prediction errors. This allows to effortlessly merge exact inference within the modules via backpropagation (through potentially very deep and nonlinear functions) to the distributed, uncertainty aware and bi-directional inference of the PC network. When each module contains a single layer, the network has a structure that is equivalent to the models discussed in [bogacz2017tutorial] and [millidge2021predictivereview], i.e. simplifies to gradient based predictive coding.

However, in contrast to these networks, our network actually learns the precision embedded in its hierarchical structure and does not simply set them to a constant value. We refer to this sort of implementation as ”local backpropagation” and hope that it accelerates the integration of concepts from predictive coding into the established methodology of training deep neural networks. Figure 2 shows an overview of the predictive coding network with precision estimation, that is employed in this work and will be discussed in detail in later sections.

Figure 3 shows an overview of the sources of uncertainty that arise when estimating the precision of observed prediction errors in each layer of the network. When all inherent timescales in the network are the same, i.e. all learned quantities are updated at the same frequency, then only the prediction error is directly observable. However, with increasing separation of timescales (e.g. weights update slower than activities), the remaining sources of uncertainty can be observed more directly. While some choice of timescales is inherent to all neural network models, here we specifically look at their dynamic modulation.

Following the notation of [millidge2021predictivereview] and [millidge2020predictive], the Free Energy can be defined as:

The dynamics of the mean activity μl and synaptic weights θl in layer l compute as:

The layer’s precision Σ−1l of layer i is the inverse variance, which is computed as:

where ~ϵl are the precision weighted prediction errors:

Update rules for the layer’s activities vi and weights θi:

The Fisher information of the layer’s activity is equal to the estimated precision error precision at that layer [millidge2021predictivereview]:

Similarly, the Fisher information with respect to the weights can be expressed as the layer’s estimated precision of prediction error, scaled by the variance of activities at the next higher layer. A slightly longer derivation of this connection can be found in appendix A.

The exact role of bottom-up and top-down propagation of precision is a largely under-explored topic in predictive coding. The often mentioned aspect of precision propagation within PC networks stands in contrast to the actual precision updates that are intrinsic to each layer, without the need to explicitly exchange information about expected precision between layers. We hope that our model clarifies some of these issues. The inferred variance in each layer depends on the error on two constantly changing input sources: The posterior activities inferred from a stream of bottom-up prediction errors and the top-down predictions from the next higher layer.

In a model with fixed weights and posterior activities in hidden layers one can iteratively sample multiple predictions of the input per data point, or sample multiple observations of the same data point (e.g. the same input image changed by additive noise). We can then update the variance estimate until convergence and only then progress to the next activity update. Comparison of such different types of inference on variance with frozen model weights is discussed in section 5.1. In contrast, when model parameters and activities are updated during variance estimation, the precision-weighted prediction errors naturally scale the learning rates of updates for each variable individually. Experiments conducted with these models are presented in sections 5.1.2 and . Since the learning rates directly affect the magnitude of change over time for each parameter, this resembles implicitly learned timescales in predictive coding models.

Despite there being no explicit sampling step, the embeddings for MNIST show a clear disentanglement when analyzed with t-SNE, hinting at the close connections between predictive coding and variational inference.

5.2 Weights learning with and without precision weighting

a.1 Fisher information with respect to the Free Energy and model weights

Where the entropy of the dirac-delta distribution is 0 and only the energy term is non-zero.

The variational free energy is the sum of the prediction errors at each layer:

The Fisher information with respect to the weights of the model is defined as the expected value of the second derivative of the variational free energy: