We provide a predictive analysis of the spread of COVID-19, also known as SARS-CoV-2, using the dataset made publicly available online by the Johns Hopkins University. Our main objective is to provide predictions for the number of infected people for different countries. The predictive analysis is done using time-series data transformed on a logarithmic scale. We use two well-known methods for prediction: polynomial regression and neural network. As the number of training data for each country is limited, we use a single-layer neural network called the extreme learning machine (ELM) to avoid over-fitting. Due to the non-stationary nature of the time-series, a sliding window approach is used to provide a more accurate prediction. 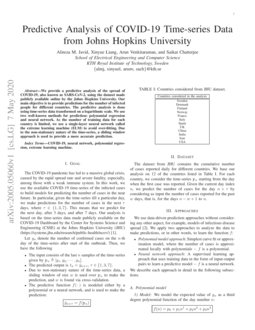 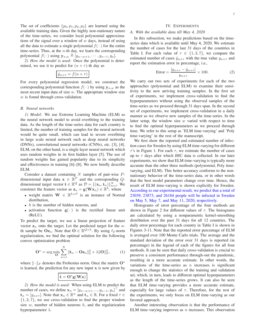 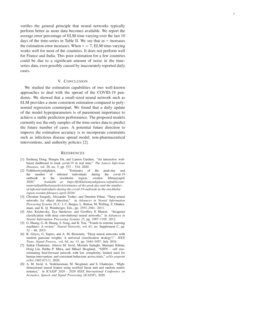 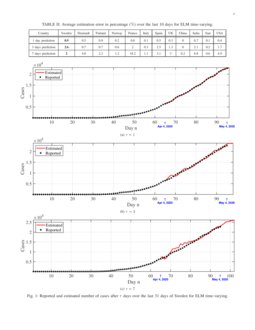 In this work, we are motivated to make predictive functionalities native...
Abdullah Alomar, et al. ∙

One of the risks of large-scale geologic carbon sequestration is the pot...
Yue Wu, et al. ∙

Predicting the spread and containment of COVID-19 is a challenge of utmo...
Hanbaek Lyu, et al. ∙

The COVID-19 pandemic has led to a massive global crisis, caused by the rapid spread rate and severe fatality, especially, among those with a weak immune system. In this work, we use the available COVID-19 time-series of the infected cases to build models for predicting the number of cases in the near future. In particular, given the time-series till a particular day, we make predictions for the number of cases in the next τ days, where τ∈{1,3,7}. This means that we predict for the next day, after 3 days, and after 7 days. Our analysis is based on the time-series data made publicly available on the COVID-19 Dashboard by the Center for Systems Science and Engineering (CSSE) at the Johns Hopkins University (JHU) (https://systems.jhu.edu/research/public-health/ncov/) [JHU_article].

Let yn denote the number of confirmed cases on the n-th day of the time-series after start of the outbreak. Then, we have the following

We use data-driven prediction approaches without considering any other aspect, for example, models of infectious disease spread [folkhal]. We apply two approaches to analyze the data to make predictions, or in other words, to learn the function f:

We describe each approach in detail in the following subsections.

We model the expected value of yn as a third degree polynomial function of the day number n:

The set of coefficients {p0,p1,p2,p3} are learned using the available training data. Given the highly non-stationary nature of the time-series, we consider local polynomial approximations of the signal over a window of w

days, instead of using all the data to estimate a single polynomial

Iii-A2 How the model is used

Once the polynomial is determined, we use it to predict for (n+τ)-th day as

For every polynomial regression model, we construct the corresponding polynomial function f(⋅) by using yn,w as the most recent input data of size w. The appropriate window size w is found through cross-validation.

[DNN_2013, CNN_2012]. ELM, on the other hand, is a single layer neural network which uses random weights in its first hidden layer [elm_HUANG2015]. The use of random weights has gained popularity due to its simplicity and effectiveness in training [giryes_randomweights, SSFN_2020, HNF_2020]. We now briefly describe ELM.

To predict the target, we use a linear projection of feature vector zn onto the target. Let the predicted target for the n-th sample be Ozn. Note that O∈RQ×h. By using ℓ2-norm regularization, we find the optimal solution for the following convex optimization problem

where ∥⋅∥F denotes the Frobenius norm. Once the matrix O⋆ is learned, the prediction for any new input x is now given by

Iii-B2 How the model is used

, and the regularization hyperparameter

In this subsection, we make predictions based on the time-series data which is available until May 4, 2020. We estimate the number of cases for the last 31 days of the countries in Table I. For each value of τ∈{1,3,7}, we compare the estimated number of cases ^yn+τ with the true value yn+τ and report the estimation error in percentage, i.e.,

We carry out two sets of experiments for each of the two approaches (polynomial and ELM) to examine their sensitivity to the new arriving training samples. In the first set of experiments, we implement cross-validation to find the hyperparameters without using the observed samples of the time-series as we proceed through 31 days span. In the second set of experiments, we implement cross-validation in a daily manner as we observe new samples of the time-series. In the latter setup, the window size w varied with respect to time to find the optimal hyperparameters as we proceed through time. We refer to this setup as ’ELM time-varying’ and ’Poly time-varying’ in the rest of the manuscript.

We first show the reported and estimated number of infection cases for Sweden by using ELM time-varying for different τ’s in Figure 1. For each τ, we estimate the number of cases up to τ days after which JHU data is collected. In our later experiments, we show that ELM time-varying is typically more accurate than the other three methods (polynomial, Poly time-varying, and ELM). This better accuracy conforms to the non-stationary behavior of the time-series data, or in other words that the best model parameters change over time. Hence, the result of ELM time-varying is shown explicitly for Sweden. According to our experimental result, we predict that a total of 23039, 23873, and 26184 people will be infected in Sweden on May 5, May 7, and May 11, 2020, respectively.

. Note that the reported error percentage of ELM is averaged over 100 Monte Carlo trials. The average and the standard deviation of the error over 31 days is reported (in percentage) in the legend of each of the figures for all four methods. It can be seen that daily cross-validation is crucial to preserve a consistent performance through-out the pandemic, resulting in a more accurate estimate. In other words, the variations of the time-series as

n increases is significant enough to change the statistics of the training and validation set, which, in turn, leads to different optimal hyperparameters as the length of the time-series grows. It can also be seen that ELM time-varying provides a more accurate estimate, especially for large values of τ. Therefore, for the rest of the experiments, we only focus on ELM time-varying as our favored approach.

Another interesting observation is that the performance of ELM time-varying improves as n increases. This observation verifies the general principle that neural networks typically perform better as more data becomes available. We report the average error percentage of ELM time-varying over the last 10 days of the time-series in Table II. We see that as τ increases the estimation error increases. When τ=7, ELM time-varying works well for most of the countries. It does not perform well for France and India. This poor estimation for a few countries could be due to a significant amount of noise in the time-series data, even possibly caused by inaccurately reported daily cases.

We studied the estimation capabilities of two well-known approaches to deal with the spread of the COVID-19 pandemic. We showed that a small-sized neural network such as ELM provides a more consistent estimation compared to polynomial regression counterpart. We found that a daily update of the model hyperparameters is of paramount importance to achieve a stable prediction performance. The proposed models currently use the only samples of the time-series data to predict the future number of cases. A potential future direction to improve the estimation accuracy is to incorporate constraints such as infectious disease spread model, non-pharmaceutical interventions, and authority policies [folkhal].