25 within the next 5 years. These thousands of individuals are at 2-fold higher risk of cardiovascular events, graft loss, infections, as well as lower long-term survival. This is partly due to the medication used during and/or after transplant that significantly impacts metabolic balance. To assess which medication best suits the patient's condition, clinicians need an accurate estimate of diabetes risk. Both patient's historical data and observations at the current visit are informative in predicting whether the patient will develop diabetes within the following year. In this work we compared a variety of time-to-event prediction models as well as classifiers predicting the likelihood of the event within a year from the current checkup. We are particularly interested in comparing two types of models: 1) standard time-to-event predictors where the historical measurements are merely concatenated, 2) incorporating Deep Markov Model to first obtain low-dimensional embedding of historical data and then using this embedding as an additional input into the model. We compared a variety of algorithms including standard and regularized Cox proportional-hazards model (CPH), mixed effect random forests, survival-forests and Weibull Time-To-Event Recurrent Neural Network (WTTE-RNN). The results show that although all methods' performances varied from year to year and there was no clear winner across all the time points, regularized CPH model that used 1 to 3 years of historical visits data on average achieved a high, clinically relevant Concordance Index of .863. We thus recommend this model for further prospective clinical validation and hopefully, an eventual use in the clinic to improve clinicians' ability to personalize post-operative care and reduce the incidence of new-onset diabetes post liver transplant. 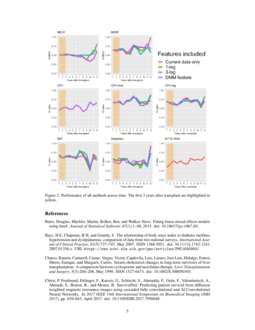 New-onset diabetes mellitus after transplant (NODAT) has been reported in up to 25% of liver transplant recipients (Hadj Ali et al., 2011; Kesiraju et al., 2014; First et al., 2013; Lv et al., 2015). One of the risk factors comes from the use of immunosuppressant drugs, such as corticosteroids, calcineurin inhibitors, and mammalian target of rapamycin (mTOR) inhibitors, which are commonly prescribed during and/or after the transplant. These drugs are known to significantly impact metabolic balance, and are associated with diabetes, hypertension, obesity, and dyslipidemia among transplant patients (Charco et al., 1999). Previous studies have shown that some drugs, such as sirolimus, one of mTOR inhibitors, are more associated with diabetes than others and there’s a suspicion that higher levels would be associated with the condition, but there is no firm evidence on this.

Many diabetes risk calculators are already available for the general public (Kaczorowski et al., 2009; Heikes et al., 2008). However, recent review of type-2 diabetes risk-prediction models described many deficiencies in majority of them (Collins et al., 2011). There needs to be a tool that is suitable for liver transplant recipients, who are more vulnerable to diabetes, to account for medication information and clinical diagnosis.

Liver transplant recipients have an annual checkup with their clinicians. We would like to make a risk calculator that clinicians can use at each patient’s yearly checkup. At each visit, the clinician will then collect current patient’s data as well as his/her historical information from previous followups, when applicable, and use our calculator to assess the risk of diabetes.

Difference between Classification and Survival Analysis   We can formulate the risk estimation in two ways. First, we can formulate it as a classification task where yi=0 indicates that patient at followup visit i will not develop diabetes in the near future, and yi=1 otherwise. On the other hand, since diabetes is a chronic disease that is persistent and long-lasting (WHO, 2017), we can approach the problem using a time-to-event model such as survival analysis. Survival analysis assumes that the event will eventually happen for all individuals (Schober & Vetter, 2018). While this assumption does not apply in our case, we will compare both approaches and assess their performance.

use neural networks to predict either a risk function or patient’s survival. The difference between the two algorithms is the incorporation of Bayesian optimization for hyperparameter tuning by

Christ et al. The introduction of non-linearity increases the algorithm’s power to fit the data better. However, unlike the classical Cox proportional-hazards (Therneau, 2015), these algorithms neglect time-varying covariates, which are crucial since we’re dealing with temporal data.

(Bates et al., 2015) and mixed effects random forest (MERF) (Hajjem et al., 2014) to predict onset of diabetes within the following year. One year in advance is sufficient to intervene and potentially prevent the onset of diabetes. We used a mixed effects model to handle the different number of visits per individual. Discussion on models trained only on one record per individual can be found in Appendix B.

Dataset Scientific Registry of Transplant Recipients (SRTR) is a collection of clinical data submitted by members of the Organ Procurement and Transplantation Network (OPTN) (Scientific Registry of Transplant Recipients, 2018). SRTR contains data both at the time of transplant and the follow-up visits from all transplant recipients in the United States. At the time of data curation, SRTR for liver transplant patients consisted of 149,479 distinct patients having liver transplants from October 1st, 1987 to March 2nd, 2017. For this study, we included 89,303 patients who are at least 18 years old and did not have diabetes at the time of transplant. We used 27 non-time-varying features and 5 time-varying features. See Appendix A for complete list of predictors and time-varying features. We split the dataset as follows: 80% of individual patients for training set, 10% validation set, and 10% held out (test) set. The reported results are presented on the held out (test) data.

Table 1 shows that MELR was not able to learn to predict diabetes within the following year, but MERF was able to achieve AUROC of 0.688. As can be seen from Table 1, the addition of historical data (1-lag, 3-lag, or DMM feature) decreased the performance of the algorithm, showing that it was not able to effectively take advantage of additional historical data.

We also compared a variety of survival models: Cox proportional-hazards (CPH), CPH with L2-regularization (CPH-reg), CPH with appropriate time-varying covariates handling (CPH-time), DeepSurv, Random Survival Forests (RSF), and Weibull Time-to-Event RNN (WTTE-RNN). Since WTTE-RNN’s architecture itself incorporates historic data, we did not add additional 1-lag, 3-lag, or DMM feature options for this model. We used concordance-index (C-index) as a means to compare these methods. C-index compares estimated risk in pairs of patients, in our case those who have diabetes versus those that don’t, calling pairs concordant when patients with diabetes were estimated to have higher risk (Harrell et al., 1996). The concordance risk is then an indicator of an accurate ordering of patients with respect to time-to-event.

Table 2 shows a very unexpected result: CPH with L2-regularization outperformed all of the other methods. It was able to reach 0.870 concordance with incorporation of historical data from the past 3 clinical visits as input. We should also note that the incorporation of DMM feature was not as predictive as including historical data from the past visits directly into the model, and even decreased the performance of RSF, DeepSurv, and CPH-time. This shows that latent representation obtained in unsupervised fashion using DMM is not as informative as one would have hoped.

Figure 2 provides a closer look at the performance of each algorithm. Specifically, Figure 2 shows the algorithms’ performance on diabetes-onset prediction across the years after liver transplant. All of the models have variable performance across time, especially MERF and RSF. This likely indicates that in our scenario random forest-based methods tend to overfit more easily while other methods are more robust. This performance variability may also partly be caused by the lack of stability of the time-varying predictors (See Appendix A, Figure 3

). It is also peculiar that DeepSurv and MELR’s performance spiked near the end. CPH’s performance was relatively the same across the different feature inputs. Overall, CPH and WTTE-RNN seemed to exhibit less variance over time and are thus more reliable and ultimately more clinically relevant.

We have compared a variety of models aiming to predict risk of new diabetes onset for post-liver transplant patients. Overall, the addition of deep latent embedding of historical data did not improve the performance of our models. On the other hand, the direct input of past visits from 1 to 3 years showed to be more informative for prediction. We recommend using an L2-regularized CPH model, with 1 to 3 years of historical visits input, to achieve a C-index of 86.3%-87.0% for further validation and ultimate use in clinical practice.

For time-varying features, we included BMI, height, weight, immunosuppressants prescribed, and whether the patient had any acute rejection episodes during the follow-up period. Figure 3 shows the distribution of each time-varying feature across the different years after liver transplant. Each cell’s colour represents the feature’s average scaled value for patients after certain number of years after transplant. For continuous features, such as BMI, HGT_CM (height in cm), WGT_KG (weight in kg), each feature is scaled such that they range from 0 (minimum) to 1 (maximum). Each cell’s colour represents the average value of this feature. For discrete features (features with either 0 or 1 values), cell’s colour represents the frequency of patients having feature value as 1.

As can be seen from Figure 3, some of the features’ distributions change over the years, e.g. medicine from immuno_group_3 (tacrolimus) were more likely to be prescribed in the first 6 years after transplant, while medicine from immuno_group_2 (cyclosporine) were more frequently prescribed 12 years after transplant. This is reflective of the change in practice over time, given that tacrolimus has been significantly favoured in recent years due to consistent and dependable trough drug levels, which make it practically easier to manage as an immunosuppressant than cyclosporine. We can also see how the mean of BMI at the time of transplant and 10 years after transplant were higher than any other time points. This shift of distribution is important since BMI is one of the biggest risk factors for diabetes (Bays et al., 2007).

Appendix B Looking at single visits

Aside from treating each patient’s multiple visits as different observations, we explored different ways of approaching the problem by isolating a single visit per patient (first visit, last visit recorded or last visit before onset of diabetes, and random visit). These approaches allow for more interpretable models, but may bias the model.

Table 3 showed performance of classification of prediction of diabetes within the following year. We performed a standard logistic regression (LR), and L2-regularized logistic regression (LR-reg) (Friedman et al., 2010), and random forest (RF) (Liaw & Wiener, 2002). "First" column represents performance of models trained with just each patient’s first visit data, but tested on all visits from held-out patient data. The reported performance are based on all visits of held-out patient data. Likewise for "Last" and "Random" columns, each model was trained with only data from each patient’s last visit or a random visit, but tested on all visits from held-out patient data. "Last 3-lag" indicates that the model was trained with each patient’s last visit data concatenated with data from the last 3 visits, similarly with "Random 3-lag". Surprisingly, LR was able to generalize and achieved a relatively-well performance.

Table 4 showed performance of survival models. More details on each method can be found in Results. We do not need to include CPH-time and WTTE-RNN, since there is only one visit per patient. As shown in Table 4, models trained on data from patient’s last visit, random visit, or their concatenation with the previous 3 visits, were able to generalize well and achieved a relatively-well performance, compared to models trained on all patient records shown in Table 2.

3.884∗10−5. As shown on Figure 4, the performance of the models are almost indistinguishable. Therefore, we decided to use a 2-dimensional representation for our classification.