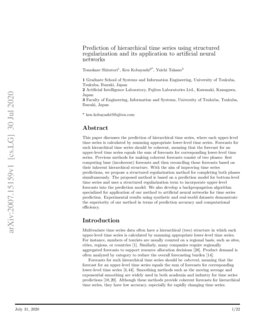 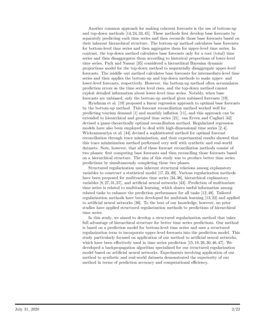 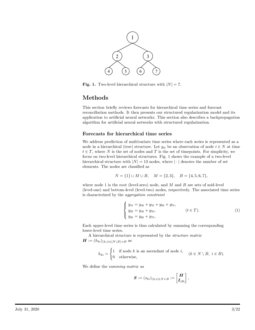 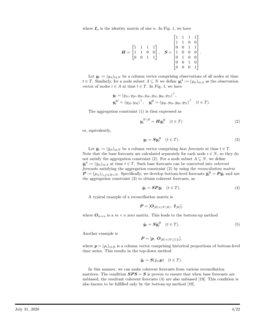 In this paper we re-consider the results of Athanasopoulos et al. (2019)...
Luisa Bisaglia, et al. ∙

When time series are organized into hierarchies, the forecasts have to s...
Giorgio Corani, et al. ∙

Hierarchical forecasting (HF) is needed in many situations in the supply...
Mahdi Abolghasemi, et al. ∙

Time Series Forecasting Models Copy the Past: How to Mitigate

Multivariate time series data often have a hierarchical (tree) structure in which each upper-level time series is calculated by summing appropriate lower-level time series. For instance, numbers of tourists are usually counted on a regional basis, such as sites, cities, regions, or countries [1]. Similarly, many companies require regionally aggregated forecasts to support resource allocation decisions [28]. Product demand is often analyzed by category to reduce the overall forecasting burden [14].

proposed a linear regression approach to optimal base forecasts by the bottom-up method. This forecast reconciliation method worked well for predicting tourism demand

[1] and monthly inflation [11], and this approach can be extended to hierarchical and grouped time series [21]. van Erven and Cugliari [42] devised a game-theoretically optimal reconciliation method. Regularized regression models have also been employed to deal with high-dimensional time series [2, 4]. Wickramasuriya et al. [44] devised a sophisticated method for optimal forecast reconciliation through trace minimization, and their experimental results showed that this trace minimization method performed very well with synthetic and real-world datasets. Note, however, that all of these forecast reconciliation methods consist of two phases: first computing base forecasts and then reconciling those forecasts based on a hierarchical structure. The aim of this study was to produce better time series predictions by simultaneously completing these two phases.

denotes the number of set elements. The nodes are classified as

where node 1 is the root (level-zero) node, and M and B are sets of mid-level (level-one) and bottom-level (level-two) nodes, respectively. The associated time series is characterized by the aggregation constraint

A hierarchical structure is represented by the structure matrix H:=(hki)(k,i)∈(N∖B)×B as

We define the summing matrix as

is the identity matrix of size

be a column vector comprising observations of all nodes at time

The aggregation constraint (1) is then expressed as

A typical example of a reconciliation matrix is

where Om×n is a m×nzero matrix. This leads to the bottom-up method

where p=(pi)i∈B is a column vector comprising historical proportions of bottom-level time series. This results in the top-down method

In this manner, we can make coherent forecasts from various reconciliation matrices. The condition SPS=S is proven to ensure that when base forecasts are unbiased, the resultant coherent forecasts (4) are also unbiased [19]. This condition is also known to be fulfilled only by the bottom-up method [19].

is a column vector of bottom-level estimates, and

εt:=(εit)i∈B is a column vector of errors having zero mean and covariance matrix var(εt):=Σt. The bottom-up method (5) with ^yBt=βt is then used to makes coherent forecasts.

If the base forecasts are unbiased and the covariance matrix Σt

is known, the generalized least-squares estimation yields the minimum variance unbiased estimate of

βt. However, the covariance matrix Σt is nonidentifiable and therefore impossible to estimate [44].

In contrast, Wickramasuriya et al. [44] focused on differences between observations and coherent forecasts (4),

The associated covariance matrix is derived as

and coherent forecasts (4) are given by

We consider a prediction model for bottom-level time series. Its predictive value is denoted by the column vector ^yBt(Θ):=(^yit(Θ))i∈B, where Θ

is a set of model parameters. As an example, the first-order vector autoregressive model is represented as

Adding the regularization term (9) to the residual sum of squares (8) yields the objective function E(Θ) to be minimized. Consequently, our structured regularization model is posed as

where λ1 and λM are regularization parameters for root and mid-level time series, respectively.

After solving the structured regularization model (10), we use the bottom-up method (5) to obtain coherent forecasts

First, we calculate the vector u(2):=(u(2)j)j∈D as the weighted sum of the input entries

Next, we generate the vector z(2):=(z(2)j)j∈D by nonlinear activation functions as

Typical examples of activation functions include the logistic sigmoid function

and the rectified linear function

The vector z(2) is transferred from the hidden units to the output units as shown in Fig. 2.

Finally, we calculate the vector u(3):=(u(3)k)k∈B as the weighted sum of the output entries from the hidden units as

This process is summarized as

where the set of model parameters is

This neural network outputs ^yBt(Θ)=u(3) as a vector of predictive values.

The experimental results reported in this section evaluate the effectiveness of our structured regularization model when applied to artificial neural networks. These experiments focused on the two-level hierarchical structure shown in Fig. 3, where

We compared performance of the following methods for time series prediction.

We adopted two-layer artificial neural networks (Fig. 2), using the previous two values yi,t−2 and yi,t−1 to compute ^yit(Θ). Following prior studies [25, 32], we set the number of hidden units to twice the number of input units (i.e., |D|=4⋅|B|). Bias parameters were added to hidden and output units.

We implemented the backpropagation algorithm (Algorithm 1) in the R programming language, with the step size and convergence threshold set as η=1⋅10−5 and ε=5⋅10−5, respectively. We employ the logistic sigmoid function (13) as an activation function. The algorithm was repeated 30 times by randomly generating initial values for the parameter Θ

from a standard normal distribution. The following sections show average RMSE values with 95% confidence intervals over the 30 trials.

We generated common factors to express correlations among time series. Denote as N(μ,σ2) a normal distribution with mean μ

σ. For common factors, we used the first-order autoregressive models

where ϕi is an autoregressive coefficient, and σi

is the standard deviation of white noise for the

ith common factor. Note that ψit reflects the overall trend for i=1 and mid-level trends for i∈M={2,3,4}.

Bottom-level time series were produced by combining the overall trend, mid-level trends, and autocorrelation. We denote the parent (mid-level) node of node i as

For bottom-level time series, we used the first-order autoregressive models

where ρi and θi respectively indicate effects of the common factors ψ1t and ψm(i),t on the ith time series. After that, we generated upper-level time series (yit for i∈N∖B) according to the aggregation constraint (2).

For the NgtvC dataset (Table 2), our structured regularization method NN+SR clearly outperformed the other methods, except for the RMSE of the root node. For the WeakC dataset (Table 3), our method was slightly inferior to the exponential smoothing method, but the differences were very small. For the PstvC dataset (Table 4), the MinT method gave the best prediction performance, and our method attained the second-best value for average RMSE. These results show that our structured regularization method delivered good prediction performance for the three synthetic datasets. Our method was especially effective when the time series were strongly correlated, as in the NgtvC and PstvC datasets.

We next focus on the parameter values for our structured regularization. Only for the PstvC dataset, our method NN+SR(λ1,λM) adopted λ1>0 and performed significantly better than the bottom-up method in terms of the RMSE of the root node. Additionally, our method employed λM>0 for all three datasets and outperformed the bottom-up method for mid-level RMSEs. These results show an association between regularization weights and prediction accuracy at each time series level. Our method adjusts the regularization parameters to fit the data characteristic, thereby achieving better prediction performance.

We used quarterly statistics (model-based estimates) of unemployment rates during 90 time periods from January 1997 to June 2019, taking the first 60 and last 30 time periods as the training and test periods, respectively. We used the stl function in the R stats package to remove seasonal and trend components. Each time series was standardized according to the mean and variance over the training period.

Tables 6–8 list the out-of-sample RMSE values provided by each method for each node in the Tohoku, Chubu, and Kansai datasets. For the Tohoku dataset (Table 6), our structured regularization method NN+SR substantially outperformed the other methods. For the Chubu dataset (Table 7), our method attained average RMSEs that were equally good as those from the exponential smoothing and bottom-up methods, whereas the MinT method showed by far the worst performance. For the Kansai dataset (Table 8), our method greatly exceeded the prediction performance of the other methods. These results demonstrate that our structured regularization method achieved superior performance for the three real-world datasets.