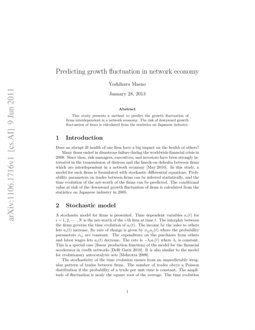 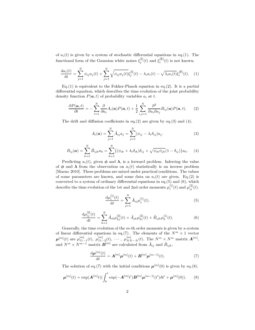 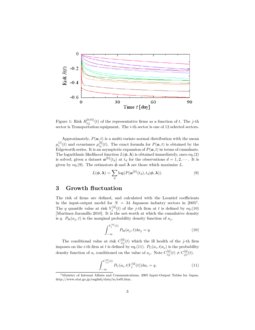 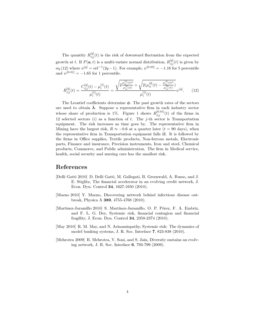 On the nature of monetary and price inflation and hyperinflation

Monetary inflation is a sustained increase in the money supply than can ...
Laurence Francis Lacey, et al. ∙

The widespread popularity of soccer across the globe has turned it into ...
Vincent Chin, et al. ∙

Modeling the growth of fingerprints improves matching for adolescents

We study the effect of growth on the fingerprints of adolescents, based ...
Carsten Gottschlich, et al. ∙

The effects of noise in particle-in-cell (PIC) and Vlasov simulations of...
Arash Tavassoli, et al. ∙

Does an abrupt ill health of one firm have a big impact on the health of others?

Many firms ended in disastrous failure during the worldwide financial crisis in 2008. Since then, risk managers, executives, and investors have been strongly interested in the transmission of distress and the knock-on defaults between firms which are interdependent in a network economy [May 2010]

. In this study, a model for such firms is formulated with stochastic differential equations. Probability parameters on trades between firms can be inferred statistically, and the time evolution of the net-worth of the firms can be predicted. The conditional value at risk of the downward growth fluctuation of firms is calculated from the statistics on Japanese industry in 2005.

A stochastic model for firms is presented. Time dependent variables ai(t) for i=1,2,⋯,N is the net-worth of the i-th firm at time t. The interplay between the firms governs the time evolution of ai(t). The income by the sales to others lets ai(t) increase. Its rate of change is given by ϕijaj(t) where the probability parameters ϕij are constant. The expenditure on the purchases from others and labor wages lets ai(t) decrease. The rate is −λiai(t) where λi is constant. This is a special case (linear production function) of the model for the financial accelerator in credit networks [Delli Gatti 2010]. It is also similar to the model for evolutionary autocatalytic sets [Mehrotra 2009].

The stochasticity of the time evolution ensues from an unpredictably irregular pattern of trades between firms. The number of trades obeys a Poisson distribution if the probability of a trade per unit time is constant. The amplitude of fluctuation is nealy the square root of the average. The time evolution of

ai(t) is given by a system of stochastic differential equations in eq.(1

). The functional form of the Gaussian white noises

Eq.(1) is equivalent to the Fokker-Planck equation in eq.(2

). It is a partial differential equation, which describes the time evolution of the joint probability density function

Predicting ai(t), given ϕ and λ, is a forward problem. Inferring the value of ϕ and λ from the observation on ai(t) statistically is an inverse problem [Maeno 2010]. These problems are mixed under practical conditions. The values of some parameters are known, and some data on ai(t) are given. Eq.(2

) is converted to a system of ordinary differential equations in eq.(

), which describe the time evolution of the 1st and 2nd order moments

is a multi-variate normal distribution with the mean

μ[1]i(t) and covariance μ[2]ij(t). The exact formula for P(\boldmath{a},t) is obtained by the Edgeworth series. It is an asymptotic expansion of P(\boldmath{a},t) in terms of cumulants. The logarithmic likelihood function L(\boldmath{ϕ},\boldmath{λ}) is obtained immediately, once eq.(2) is solved, given a dataset \boldmath{a}[D](td) at td for the observations d=1,2,⋯. It is given by eq.(9

The risk of firms are defined, and calculated with the Leontief coefficients in the input-output model for N=34 Japanese industry sectors in 2005111Ministry of Internal Affairs and Communications, 2005 Input-Output Tables for Japan. http://www.stat.go.jp/english/data/io/io05.htm.. The qquantile value at risk V[q]j(t) of the j-th firm at t is defined by eq.(10) [Martinez-Jaramillo 2010]. It is the net-worth at which the cumulative density is q. PM(aj,t) is the marginal probability density function of aj.

The conditional value at risk C[q]i|j(t) which the ill health of the j-th firm imposes on the i-th firm at t is defined by eq.(11). PC(ai,t|aj) is the probability density function of ai conditioned on the value of aj. Note C[q]i|j(t)≠C[q]j|i(t).

The Leontief coefficients determine ϕ. The past growth rates of the sectors are used to obtain ^\boldmath{λ}. Suppose a representative firm in each industry sector whose share of production is 1%. Figure 1 shows R[0.01]i|j(t) of the firms in 12 selected sectors (i) as a function of t. The j-th sector is Transportation equipment. The risk increases as time goes by. The representative firm in Mining have the largest risk, R≈−0.6 at a quarter later (t=90 days), when the representative firm in Transportation equipment falls ill. It is followed by the firms in Office supplies, Textile products, Non-ferrous metals, Electronic parts, Finance and insurance, Precision instruments, Iron and steel, Chemical products, Commerce, and Public administration. The firm in Medical service, health, social security and nursing care has the smallest risk.