In this work, we utilize T1-weighted MR images and StackNet to predict fluid intelligence in adolescents. Our framework includes feature extraction, feature normalization, feature denoising, feature selection, training a StackNet, and predicting fluid intelligence. The extracted feature is the distribution of different brain tissues in different brain parcellation regions. The proposed StackNet consists of three layers and 11 models. Each layer uses the predictions from all previous layers including the input layer. The proposed StackNet is tested on a public benchmark Adolescent Brain Cognitive Development Neurocognitive Prediction Challenge 2019 and achieves a mean absolute error of 82.42 on the combined training and validation set with 10-fold cross-validation. 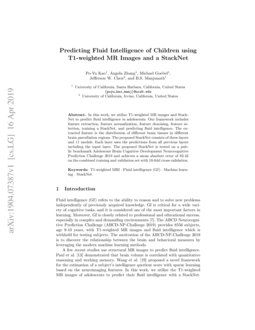 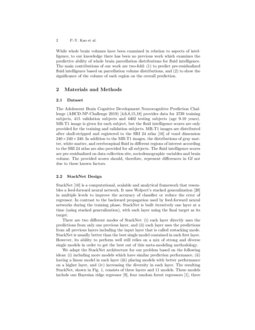 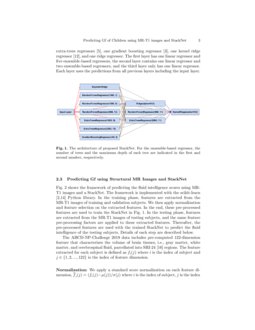 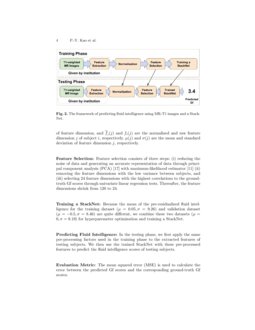 Association Between Intelligence and Cortical Thickness in Adolescents: Evidence from the ABCD Study

The relationship between the intelligence and brain morphology is warmly...
Qi Zhao, et al. ∙

In the cognitive sciences, it is common to distinguish between crystal i...
Tomer Barak, et al. ∙

Fluid intelligence (Gf) refers to the ability to reason and to solve new problems independently of previously acquired knowledge. Gf is critical for a wide variety of cognitive tasks, and it is considered one of the most important factors in learning. Moreover, Gf is closely related to professional and educational success, especially in complex and demanding environments [7]. The ABCD Neurocognitive Prediction Challenge (ABCD-NP-Challenge 2019) provides 8556 subjects, age 9-10 years, with T1-weighted MR images and fluid intelligence which is withheld for testing subjects. The motivation of the ABCD-NP-Challenge 2019 is to discover the relationship between the brain and behavioral measures by leveraging the modern machine learning methods.

proposed a novel framework for the estimation of a subject’s intelligence quotient score with sparse learning based on the neuroimaging features. In this work, we utilize the T1-weighted MR images of adolescents to predict their fluid intelligence with a StackNet. While whole brain volumes have been examined in relation to aspects of intelligence, to our knowledge there has been no previous work which examines the predictive ability of whole brain parcellation distributions for fluid intelligence. The main contributions of our work are two-fold: (1) to predict pre-residualized fluid intelligence based on parcellation volume distributions, and (2) to show the significance of the volume of each region on the overall prediction.

The Adolescent Brain Cognitive Development Neurocognitive Prediction Challenge (ABCD-NP-Challenge 2019) [4, 6, 8, 15, 18] provides data for 3739 training subjects, 415 validation subjects and 4402 testing subjects (age 9-10 years). MR-T1 image is given for each subject, but the fluid intelligence scores are only provided for the training and validation subjects. MR-T1 images are distributed after skull-stripped and registered to the SRI 24 atlas [16] of voxel dimension 240×240×240. In addition to the MR-T1 images, the distributions of gray matter, white matter, and cerebrospinal fluid in different regions of interest according to the SRI 24 atlas are also provided for all subjects. The fluid intelligence scores are pre-residualized on data collection site, sociodemographic variables and brain volume. The provided scores should, therefore, represent differences in Gf not due to these known factors.

is a computational, scalable and analytical framework that resembles a feed-forward neural network. It uses Wolpert’s stacked generalization

in multiple levels to improve the accuracy of classifier or reduce the error of regressor. In contrast to the backward propagation used by feed-forward neural networks during the training phase, StackNet is built iteratively one layer at a time (using stacked generalization), with each layer using the final target as its target.

There are two different modes of StackNet: (i) each layer directly uses the predictions from only one previous layer, and (ii) each layer uses the predictions from all previous layers including the input layer that is called restacking mode. StackNet is usually better than the best single model contained in each first layer. However, its ability to perform well still relies on a mix of strong and diverse single models in order to get the best out of this meta-modeling methodology.

We adapt the StackNet architecture for our problem based on the following ideas: (i) including more models which have similar prediction performance, (ii) having a linear model in each layer (iii) placing models with better performance on a higher layer, and (iv) increasing the diversity in each layer. The resulting StackNet, shown in Fig. 1, consists of three layers and 11 models. These models include one Bayesian ridge regressor [9]

The ABCD-NP-Challenge 2019 data includes pre-computed 122-dimension feature that characterizes the volume of brain tissues, i.e., gray matter, white matter, and cerebrospinal fluid, parcellated into SRI-24 [16] regions. The feature extracted for each subject is defined as fi(j) where i is the index of subject and j∈{1,2,...,122} is the index of feature dimension.

are the mean and standard deviation of feature dimension

Feature selection consists of three steps: (i) reducing the noise of data and generating an accurate representation of data through principal component analysis (PCA)

Because the mean of the pre-residualized fluid intelligence for the training dataset (μ=0.05,σ=9.26) and validation dataset (μ=−0.5,σ=8.46) are quite different, we combine these two datasets (μ=0,σ=9.19) for hyperparemeter optimization and training a StackNet.

The mean squared error (MSE) is used to calculate the error between the predicted Gf scores and the corresponding ground-truth Gf scores.

. We then use the corresponding eigenvectors and eigenvalues from the PCA transformation to build two matrices,

\vvI122×1 is the feature importance vector in the original data space, and we also normalize it w.r.t. its total importance and rescale it,

Now, \vvInrm is the normalized feature importance vector in the original data space of dimension 122, and each value of this vector represents the importance of a brain tissue volume in a region for the task of predicting the Gf scores. Higher importance represents higher correlation to the Gf score.

We examine the Gf prediction performance of individual models and StackNet on the combined dataset with 10-fold cross-validation, with the quantitative results shown in Table 1. The baseline is calculated by assigning the mean fluid intelligence (μ=0) to every subject in the combined dataset. From Table 1, the performance of each model is better than the baseline of guessing the mean every subject, and the performance of the StackNet is better than every individual model within itself because it takes advantage of stacked generalization.

Second, we compute the importance of each dimension of the extracted feature by leveraging the F score from feature selection and eigenvectors and eigenvalues from PCA as described in Section

2.4. Each dimension of the extracted feature corresponds to the volume of a certain type of brain tissue in a certain region. Table 2 and Table 3 show the top 10 most and least important feature dimensions for the task of predicting Gf, respectively, and higher importance represents higher correlation to the Gf scores.

In conclusion, we demonstrate that the proposed StackNet with the distribution of different brain tissues in different brain parcellation regions has the potential to predict fluid intelligence in adolescents.

This research was partially supported by a National Institutes of Health (NIH) award # 5R01NS103774-02.