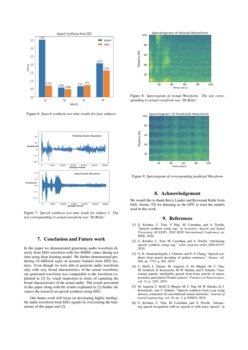 Synthesizing speech from neural signals might help people with speaking disabilities or disorders like aphasia, stuttering etc to use virtual personal assistants like Bixby, Siri, Alexa etc there by helping in improving technology accessibility. It might also help people who can’t produce any voice at all like for example people recovering from sever stroke or amyotrophic lateral sclerosis (ALS) with speech restoration. So far most promising results on synthesizing speech from neural signals were obtained using speech synthesis from invasive electrocorticography (ECoG) neural signals where a subject need to undergo a brain surgery to implant ECoG electrodes on the surface of the brain. The ECoG signals offer very high temporal resolution, good spatial resolution and signal to noise ratio. The works described in references

[3, 4, 5] provides results on synthesizing intelligible speech from ECoG recordings. One major limitation of ECoG approach is the requirement of brain surgery to implant the electrodes which makes ECoG based speech prosthetic systems difficult to deploy and study.

On the other hand we have electroencephalography (EEG) signals which is a non-invasive way of measuring electrical activity of human brain where EEG sensors are placed on the scalp of the subject to obtain the EEG readings. The EEG signals offers high temporal resolution like ECoG signals, however the major disadvantage of EEG is the spatial resolution and signal to noise ratio offered are poor compared to ECoG. The non-invasive nature of EEG makes it easy to study and deploy compared to ECoG. Due to the poor signal to noise ratio offered by EEG signals the performance or accuracy of EEG based brain computer interface (BCI) systems are poor compared to ECoG based BCI systems. In [6, 7, 8]

authors demonstrated the feasibility of performing continuous and silent speech recognition using EEG signals in presence and absence of background noise. They used principles of automatic speech recognition (ASR) to translate the EEG recordings to text. Their results were demonstrated for limited English vocabulary. Similarly in

[9, 10] authors demonstrated speech recognition using ECoG signals with better accuracy. One approach to synthesize speech from EEG signals would be first use an EEG based continuous speech recognizer to produce text from EEG and then use an existing state of art text to speech (TTS) system to convert text to sound. However this approach suffers from following limitations - First of all the word error rates reported by current existing EEG based continuous speech recognizer is very high during test time [6, 8, 11] and then using a TTS system at the final stage in the pipeline will introduce additional latency. It is possible to produce personalized sound using speaker dependent TTS but it is not clear how these systems will perform if the speech is broken or distorted like in the case of speech from an aphasia or stuttering patient. So an alternative approach would be to produce speech directly from EEG signals. In [1] authors provided preliminary results for synthesizing speech from EEG features where they reconstruct speech waveform from the predicted acoustic features, however they were not able to produce intelligible speech. In [2] authors improved the results presented in [1] by using attention mechanism [12] between the encoder and decoder in their model and they also identified the right sampling frequency to extract features to produce more intelligible speech compared to [1]. However in [2] the speech waveform constructed from the predicted acoustic features were noisy.

In this paper we introduce a deep learning model that takes raw EEG waveform signals as input and directly outputs speech or audio waveform. We show that by this approach it is possible to produce audio waveform from EEG signal with less noise compared to [2]. We were not able to produce intelligible audio but the results presented in this paper along with results from [2] shows further evidence on the future possibility of producing high quality intelligible audio from EEG. We finally demonstrate predicting sixteen different acoustic features from EEG features in this paper. In [1, 2] authors demonstrated predicting only one type of acoustic feature namely mel frequency cepstral coefficients (MFCCs) from EEG features.

Figure 1 explains the architecture of our speech synthesis model. The model consists of a temporal convolutional network (TCN) [13]

layer with 256 filters which takes raw EEG waveform signals from 31 channels as input and the features extracted by the TCN layer is up sampled at a rate of 15 (5 times 3). A dropout regularization

with dropout rate 0.2 and a TCN layer with 32 filters is applied before the final up sampling layer. The up sampled features are then passed to a time distributed dense layer consisting of linear activation function with one hidden unit which directly outputs the audio waveform. The model was trained for 5000 epochs using adam

optimizer with a batch size of 100. We used mean squared error (MSE) as the loss function for the model.

[16] based regression model. The model consists of a single layer of GRU with 128 hidden units which takes EEG features of dimension 30 as input and the GRU output features are passed to a dropout regularization with dropout rate 0.2 and then to a time distributed dense layer with linear activation function. The number of hidden units in the time distributed dense layer was same as the dimension of the acoustic feature type the model was predicting for the given input EEG features. The model was trained for 500 epochs with a batch size of 100. The MSE was used as the loss function for the model with adam as the optimizer.

They used Brain product’s ActiChamp EEG amplifier. Their EEG cap had 32 wet EEG electrodes including one electrode as ground. It is based on standard 10-20 EEG sensor placement method for 32 electrodes.

For each experiment set we used 80% of the data as training set, remaining 10% as validation set and rest 10% as test set. The train-test split was done randomly. There was no overlap between training, testing and validation set. The way we splitted data in this work is exactly same as the method used by authors in [1, 2].

We followed the same EEG preprocessing methods used by authors in [2]. The EEG signals were sampled at 1000Hz and a fourth order IIR band pass filter with cut off frequencies 0.1Hz and 70Hz was applied. A notch filter with cut off frequency 60 Hz was used to remove the power line noise. The EEGlab’s [17]Independent component analysis (ICA) toolbox was used to remove other biological signal artifacts like electrocardiography (ECG), electromyography (EMG), electrooculography (EOG) etc from the EEG signals. These EEG signals after artifact removal or correction were fed to the speech synthesis model described in Figure 1. Thus the model in Figure 1 took EEG waveform from 31 channels as input as the 32nd channel was ground.

[18] as explained by authors in [7, 6] for the problem of predicting different acoustic features from EEG features.

The EEG features and all the audio features were extracted at a sampling frequency of 31 Hz. In [2, 1] authors extracted features at 100Hz, 32 Hz.

we reduced 155 EEG features to a dimension of 30. More details of explained variance plot used to identify the right feature dimension is covered in

[8, 6]. We used a polynomial kernel with degree 3 for performing kernel PCA.

In [2] authors used mel cepstral distortion (MCD) [22] as the performance metric during test time but since here we are directly producing audio waveform as the output we used root mean squared error (RMSE) between the predicted audio waveform and ground truth audio waveform from test set as performance metric during test time for speech synthesis problem. The Figure 6 shows the obtained test time results for speech synthesis for four subjects for both spoken and listen condition. For spoken condition we observed lowest RMSE value of 0.583 for subject 2 and for listen condition we observed lowest RMSE value of 0.489 again for subject 2. The Figure 7 shows the visualization of the predicted waveform and ground truth waveform from test set for a sample for subject 1 for spoken condition. As seen from the plots, our predicted waveform was comparable with the waveform reconstructed from the predicted MFCC or acoustic features explained in [2] in terms of capturing very broad characteristics of the actual waveform for the same transcript from the same subject, however we observed that our predicted waveform had amplitude values amplified by a bigger margin compared to the predicted waveform explained in [2]

. Figures 8 and 9 shows the corresponding spectrogram for the actual and predicted waveform. As seen from the spectrograms, the predicted and actual waveform shared some features in common in frequency domain.

In this paper we demonstrated generating audio waveform directly from EEG waveform with low RMSE values during test time using deep learning model. We further demonstrated predicting 16 different types of acoustic features from EEG features. Even though we were able to generate audio waveform only with very broad characteristics of the actual waveform, our generated waveform was comparable to the waveform explained in [2] by visual inspection in terms of capturing the broad characteristics of the actual audio. The results presented in this paper along with the results explained in [2] further advances the research on speech synthesis using EEG.

Our future work will focus on developing highly intelligible audio waveform from EEG signals by overcoming the limitations of this paper and [2].

We would like to thank Kerry Loader and Rezwanul Kabir from Dell, Austin, TX for donating us the GPU to train the models used in this work.