The recommendation methods based on network diffusion have been shown to perform well in both recommendation accuracy and diversity. Nowdays, numerous extensions have been made to further improve the performance of such methods. However, to what extent can items be predicted by diffusion-based algorithms still lack of understanding. Here, we mainly propose a method to quantify the predictability of diffusion-based algorithms. Accordingly, we conduct experiments on Movielens and Netflix data sets. The results show that the higher recommendation accuracy based on diffusion algorithms can still be achieved by optimizing the way of resource allocation on a density network. On a sparse network, the possibility of improving accuracy is relatively low due to the fact that the current accuracy of diffusion-based methods is very close its predictability. In this case, we find that the predictability can be improved significantly by multi-steps diffusion, especially for users with less historical information. In contrast to common belief, there are plausible circumstances where the higher predictability of diffusion-based methods do not correspond to those users with more historical recording. Thus, we proposed the diffusion coverage and item average degree to explain this phenomenon. In addition, we demonstrate the recommendation accuracy in real online system is overestimated by random partition used in the literature, suggesting the recommendation in real online system may be a harder task. 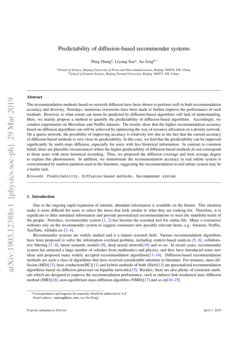 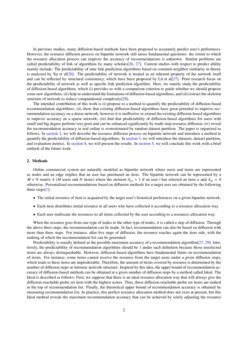 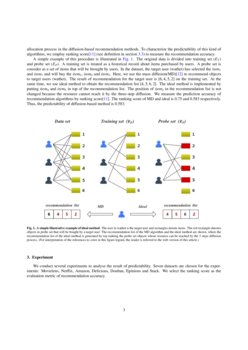 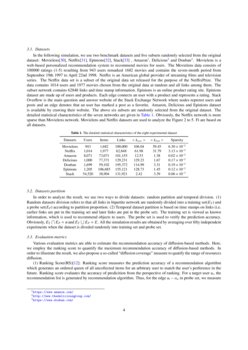 Due to the ongoing rapid expansion of internet, abundant information is available on the Iternet. This situation make it more difficult for users to select the items that look similar to what they are looking for. Therefore, it is significant to filter unrelated information and provide personalized recommendations to meet the manifold needs of the people. Nowdays, recommender system (1; 2) has become the essential tool for online life. Many e-commerce websites rely on the recommender system to suggest consumers new possibly relevant items, e.g. Amazon, Netflix, YouTube, Alibaba etc (3; 4).

In previous studies, many diffusion-based methods have been proposed to accurately predict user’s preferences. However, the resource diffusion process on bipartite network still raises fundamental questions: the extent to which the resource allocation process can improve the accuracy of recommendations is unknown. Similar problems are called predictability of link or algorithms by many scholars(26; 27). Current studies with respect to predict ability mainly include: The predictability of nine link prediction algorithms based on common neighbor similarity in theory is analyzed by Xu et al(26). The predictability of network is treated as an inherent property of the network itself and can be reflected by structural consistency, which have been proposed by Lü et al(27). Prior research focus on the predictability of network as well as specific link prediction algorithm. Here, we mainly study the predictability of diffusion-based algorithms, which (i) provides us with a comparison criterion to guide whether we should propose some new algorithms, (ii) help us understand the limitations of diffusion-based algorithms, and (iii) extract the skeleton structure of network to reduce computational complexity(28).

, we will introduce the datasets, dataset partition, and evaluation metrics. In

section 4, we will present the results. In section 5, we will conclude this work with a brief outlook of the future work.

Online commercial system are naturally modeled as bipartite network where users and items are represented as nodes and an edge implies that an user has purchased an item. The bipartite network can be represented by a M×N matrix A (M users and N items) where the element Aiα=1 if an user i has selected an item α and Aiα=0 otherwise. Personalized recommendations based on diffusion methods for a target user are obtained by the following three steps(1):

A simple example of this procedure is illustrated in Fig. 1. The original data is divided into training set (ET) and probe set (EP). A training set is treated as a historical record about items purchased by users. A probe set is consider as a set of items that will be brought by users. In the dataset, the target user (wathet) has selected the item1 and item3 and will buy the item2, item4 and item5. Here, we use the mass diffusion(MD)(12) to recommend objects to target users (wathet). The result of recommendation for the target user is [6,4,5,2] on the training set. At the same time, we use ideal method to obtain the recommendation list [4,5,6,2]. The ideal method is implemented by putting item4 and item5 in top of the recommendation list. The position of item2 in the recommendation list is not changed because the resource cannot reach it by the three-step diffusion. We measure the prediction accuracy of recommendation algorithms by ranking score(11). The ranking score of MD and ideal is 0.75 and 0.583 respectively. Thus, the predictability of diffusion-based method is 0.583.

We conduct several experiments to analyse the result of predictability. Seven datasets are chosen for the experiments: Movielens, Netflix, Amazon, Delicious, Douban, Epinions and Stack. We select the ranking score as the evaluation metric of recommendation accuracy.

In the following simulation, we use two benchmark datasets and five subsets randomly selected from the original dataset: Movielens(30), Netflix(31), Epinions(32), Stack(33) , Amazon111https://www.amazon.com/, Delicious222http://www.thedeliciousgroup.com/ and Douban333https://www.douban.com/. Movielens is a web-based personalized recommendation system to recommend movies for users. The Movielens data consists of 100000 ratings (1-5) resulting from 943 users remarked 1682 movies and contains the seven-month period from September 19th 1997 to April 22nd 1998. Netflix is an American global provider of streaming films and television series. The Netflix data set is a subset of the original data set released for the purpose of the NetflixPrize. The data contains 1014 users and 1977 movies chosen from the original data at random and all links among them. The subset network contains 62848 links and time stamp information. Epinions is an online product rating site. Epinions dataset are made up of users and products. Each edge connects an user with a product and represents a rating. Stack Overflow is the main question and answer website of the Stack Exchange Network where nodes reprenst users and posts and an edge denotes that an user has marked a post as a favorite. Amazon, Delicious and Epinions dataset is available by crawing their website. The above six subsets are randomly selected from the original dataset. The detailed statistical characteristics of the seven networks are given in Table 1. Obviously, the Netflix network is more sparse than Movielens network. Movielens and Netflix datasets are used to analyze the Figure 2 to 5. Fi are based on all datasets.

In order to analyze the result, we use two ways to divide datasets: random partition and temporal division. (1) Random datasets division refers to that all links in bipartite network are randomly divided into a training set(ET) and a probe set(EP) according to partition proportion. (2) Temporal dataset partition is based on time stamps on links (i.e. earlier links are put in the training set and later links are put in the probe set). The training set is viewed as known information, which is used to recommend objects to users. The probe set is used to verify the prediction accuracy. Obviously, ET⋂EP=\o and ET⋃EP=E. All the simulation results are obtained by averaging over fifty independent experiments when the dataset is diveded randomly into training set and probe set.

where RSui denotes the ranking score of the user i. The uiα is user i - object α relations in the probe set and liα is the rank of object α in the recommendation list of user i. Lui equals to |O−ETui|, namely the number of uncollected item for user i. |{uiα∈EP}| denotes the number of item for user i in probe set. The RS of the whole system is obtained by averaging RSui over all users. Obviously, the range of RS is that RS∈(0,1). The smaller RS, the higher the prediction accuracy of recommendation algorithms, vice versa.

(2) Diffusion Coverage(DC): Diffusion coverage quantifies the fraction of uncollected items that resource can be reached by the diffusion-based recommendation methods. DC is defined as the ratio of unselected objects covered by resources to the number of uncollected objects. For a target user, the greater the scope of resource diffusion, more products have the possibility to be recommended to users in this system and vice versa. The definition is as follows:

4.1 The predictability of diffusion-based method

The analysis of predictability on dense and spares network in studied Movielens and Netflix reveals three general results (see Fig. 2): (1) For users with different degree, the value of RS of Ideal method is close to 0 on a dense network. This denote items to be bought by users can be accurately recommend when employing a diffusion-based algorithms with perfect way of resource allocation. In other words, the current recommendation accuracy of diffusion-based algorithms can be enhanced if the scoring scheme of the diffusion-reachable items is improved (see Fig. 2 a,b). (2) The value of RS of Ideal method for both small and big degree user higher than other users on sparse network, where small / big degree user refer to user’s degree less than 3 / greater than 54. This result suggest that the predictability of diffusion-based methods for these users is very low and it is difficult for small and big degree users to recommend items to be bought on a sparse network (see Fig. 2 c,d). (3) For various users, the RS of MD is very close to RS of Ideal method on Netflix dataset (see Fig. 2 d). In this case, if we are dedicated to extend existing diffusion-based algorithms, the improvement of recommendation accuracy is not obvious. This results reveals that the improvement of recommendation accuracy based on diffusion algorithms on sparse network need to take other methods to increase its predictability instead of simply adjusting the resource allocation matrix. Our study highlights the fact whether a new recommendation algorithms based on resource diffusion should be proposed need to depend on its predictability.

Intuitively, the lower predictability of diffusion-based algorithms for small degree users is not surprising on a sparse network, because the link information of users is too less to spread the resource to unselected items. However, for big degree users, the predictability of diffusion-based algorithms is contradict to what we have imagined. Next, we propose two metrics to illustrate the mechanism behind it: diffusion coverage and item average degree (detailed information of diffusion coverage can be seen in Eq. 2). The item average degree reflects the popularity of item selected by users. Fig. 3 show the diffusion coverage and item average degree for various users on dense and sparse networks, which is conducted on Movielens and Netflix respectively. (1) On a dense network (see Fig. 3 a), the smallest value of DC among all users reach 0.99, which suggesting resource almost fully cover items that have never been selected by users. In addition, the item average degree for all users is very large even though it decreases with user degree, revealing users tend to buy popular items that are covered easily by resource. This is a possible explanation for the higher predictability of diffusion-based method observed on dense network. (2) On a sparse network (see Fig. 3

Fig. 3 c and Fig. 2 c). Similar interpretation on Netflix dataset is obtained form the Fig. 3 b,d. The proposition of two metrics help us understand deeply the limitations and advantage of diffusion-based recommendation algorithms.

4.2 The improvement of predictability of diffusion-based methods

4.3 The predictability of diffusion-based algorithms under temporal dataset partition

The authors declare no conflict of interest.