This paper describes shortly the basic principles of the PredatorHP (Predator Hunting Party) shape analyzer and presents its recent improvements. One of the most visible changes is the way PredatorHP handles interval-sized memory regions, which is particularly useful for dealing with arrays whose size is not fixed in advance. Further, the paper characterizes PredatorHP's participation in SV-COMP 2019, pointing out its strengths and weakness and the way they were influenced by the latest changes in the tool. 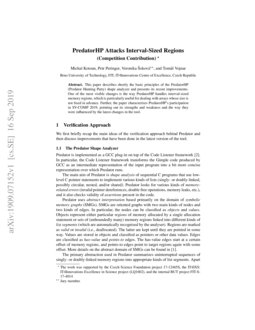 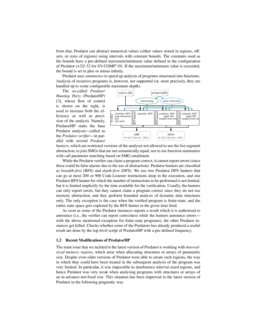 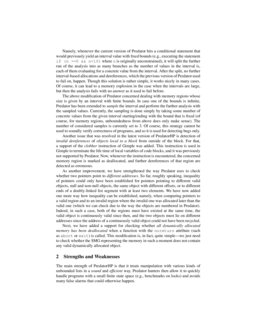 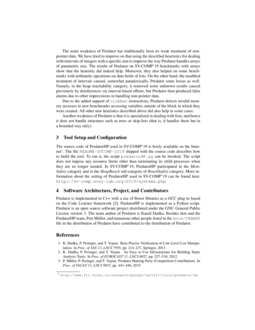 We first briefly recap the main ideas of the verification approach behind Predator and then discuss improvements that have been done in the latest version of the tool.

(SMGs). SMGs are oriented graphs with two main kinds of nodes and two kinds of edges. In particular, the nodes can be classified as

objects and values. Objects represent either particular regions of memory allocated by a single allocation statement or sets of (unboundedly many) memory regions linked into different kinds of list segments (which are automatically recognised by the analyser). Regions are marked as valid or invalid (i.e., deallocated). The latter are kept until they are pointed in some way. Values are stored in objects and classified as pointers or other data values. Edges are classified as has-value and points-to edges. The has-value edges start at a certain offset of memory regions, and points-to edges point to target regions again with some offset. More details on the abstract domain of SMGs can be found in [1].

The primary abstraction used in Predator summarizes uninterrupted sequences of singly- or doubly-linked memory regions into appropriate kinds of list segments. Apart from that, Predator can abstract numerical values (either values stored in regions, offsets, or sizes of regions) using intervals with constant bounds. The constants used as the bounds have a pre-defined maximum/minimum value defined in the configuration of Predator (+32/-32 for SV-COMP’19). If the maximum/minimum value is exceeded, the bound is set to plus or minus infinity.

Predator uses summaries to speed up analysis of programs structured into functions. Analysis of recursive programs is, however, not supported (or, more precisely, they are handled up to some configurable maximum depth).

The so-called Predator Hunting Party (PredatorHP) [3], whose flow of control is shown on the right, is used to increase both the efficiency as well as precision of the analysis. Namely, PredatorHP starts the base Predator analyser—called as the Predator verifier—in parallel with several Predator hunters, which are restricted versions of the analyser not allowed to use the list-segment abstraction, to join SMGs that are not semantically equal, nor to use function summaries with call parameter matching based on SMG entailment.

While the Predator verifier can claim a program correct, it cannot report errors (since these could be false alarms due to the use of abstraction). Predator hunters are classified as breadth-first (BFS) and depth-first (DFS). We use two Predator DFS hunters that can go at most 200 or 900 Code-Listener instructions deep in the execution, and one Predator BFS hunter for which the number of instructions to be performed is not limited, but it is limited implicitly by the time available for the verification. Usually, the hunters can only report errors, but they cannot claim a program correct since they do not use memory abstraction, and they perform bounded analysis of dynamic data structures only. The only exception is the case when the verified program is finite-state, and the entire state space gets explored by the BFS hunter in the given time limit.

As soon as some of the Predator instances reports a result which it is authorised to announce (i.e., the verifier can report correctness while the hunters announce errors—with the above mentioned exception for finite-state programs), the other Predator instances get killed. Checks whether some of the Predators has already produced a useful result are done by the top-level script of PredatorHP with a pre-defined frequency.

The main issue that we tackled in the latest version of Predator is working with interval-sized memory regions, which arise when allocating structures or arrays of parametric size. Despite even older versions of Predator were able to create such regions, the way in which they could have been treated in the subsequent analysis of the program was very limited. In particular, it was impossible to dereference interval-sized regions, and hence Predator was very weak when analysing programs with structures or arrays of an in-advance-not-fixed size. This situation has been improved in the latest version of Predator in the following pragmatic way.

Namely, whenever the current version of Predator hits a conditional statement that would previously yield an interval value with fixed bounds (e.g., executing the statement if (n >=0 && n<10) where n is originally unconstrained), it will split the further run of the analysis into as many branches as the number of values in the interval is, each of them evaluating for a concrete value from the interval. After the split, no further interval-based allocations and dereferences, which the previous version of Predator used to fail on, happen. Though this solution is rather simple, it works nicely in many cases. Of course, it can lead to a memory explosion in the case when the intervals are large, but then the analysis fails with no answer as it used to fail before.

The above modification of Predator concerned dealing with memory regions whose size is given by an interval with finite bounds. In case one of the bounds is infinite, Predator has been extended to sample the interval and perform the further analysis with the sampled values. Currently, the sampling is done simply by taking some number of concrete values from the given interval starting/ending with the bound that is fixed (of course, for memory regions, unboundedness from above does only make sense). The number of considered samples is currently set to 3. Of course, this strategy cannot be used to soundly verify correctness of programs, and so it is used for detecting bugs only.

Another issue that was resolved in the latest version of PredatorHP is detection of invalid dereferences of objects local to a block from outside of the block. For that, a support of the clobber instruction of Gimple was added. This instruction is used in Gimple to terminate the life time of local variables of code blocks, and it was previously not supported by Predator. Now, whenever the instruction is encountered, the concerned memory region is marked as deallocated, and further dereferences of that region are detected as erroneous.

As another improvement, we have strengthened the way Predator uses to check whether two pointers point to different addresses. So far, roughly speaking, inequality of pointers could only have been established for pointers pointing to different valid objects, null and non-null objects, the same object with different offsets, or to different ends of a doubly-linked list segment with at least two elements. We have now added one more way how inequality can be established, namely, when comparing pointers to a valid region and to an invalid region where the invalid one was allocated later than the valid one (which we can check due to the way the objects are numbered in Predator). Indeed, in such a case, both of the regions must have existed at the same time, the valid object is continuously valid since then, and the two objects must lie on different addresses since the address of a continuously valid object could not have been recycled.

Next, we have added a support for checking whether all dynamically allocated memory has been deallocated when a function with the noreturn attribute (such as abort or exit

) is called. This modification is, in fact, quite simple—we just need to check whether the SMG representing the memory in such a moment does not contain any valid dynamically allocated object.

The main strength of PredatorHP is that it treats manipulation with various kinds of unbounded lists in a sound and efficient way. Predator hunters then allow it to quickly handle programs with a small finite state space (e.g., benchmarks on locks) and avoids many false alarms that could otherwise happen.

The main weakness of Predator has traditionally been its weak treatment of non-pointer data. We have tried to improve on that using the described heuristics for dealing with intervals of integers with a specific aim to improve the way Predator handles arrays of parametric size. The results of Predator on SV-COMP’19 benchmarks with arrays show that the heuristic did indeed help. Moreover, they also helped on some benchmarks with arithmetic operations on data fields of lists. On the other hand, the modified treatment of intervals caused, somewhat paradoxically, Predator some losses as well. Namely, in the heap reachability category, it removed some unknown results caused previously by dereferences via interval-based offsets, but Predator then produced false alarms due to other imprecisions in handling non-pointer data.

Due to the added support of clobber instructions, Predator detects invalid memory accesses in new benchmarks accessing variables outside of the block in which they were created. All other new heuristics described above did also help in some cases.

Another weakness of Predator is that it is specialized in dealing with lists, and hence it does not handle structures such as trees or skip-lists (that is, it handles them but in a bounded way only).

The source code of PredatorHP used in SV-COMP’19 is freely available on the Internet111http://www.fit.vutbr.cz/research/groups/verifit/tools/predator-hp. The file README-SVCOMP-2019 shipped with the source code describes how to build the tool. To run it, the script predatorHP.py can be invoked. The script does not impose any resource limits other than terminating its child processes when they are no longer needed. In SV-COMP’19, PredatorHP participated in the MemSafety category and in the HeapReach sub-category of ReachSafety category. More information about the setting of PredatorHP used in SV-COMP’19 can be found here: http://sv-comp.sosy-lab.org/2019/systems.php.