Graph filters and their inverses have been widely used in denoising, smoothing, sampling, interpolating and learning. Implementation of an inverse filtering procedure on spatially distributed networks (SDNs) is a remarkable challenge, as each agent on an SDN is equipped with a data processing subsystem with limited capacity and a communication subsystem with confined range due to engineering limitations. In this letter, we introduce a preconditioned gradient descent algorithm to implement the inverse filtering procedure associated with a graph filter having small geodesic-width. The proposed algorithm converges exponentially, and it can be implemented at vertex level and applied to time-varying inverse filtering on SDNs. 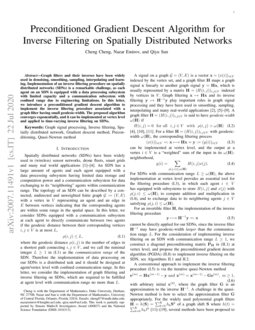 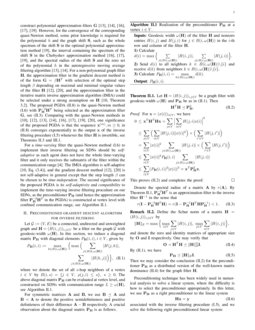 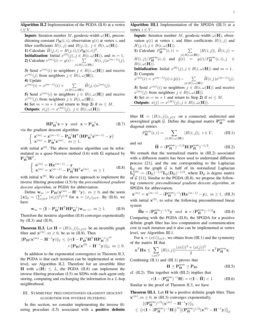 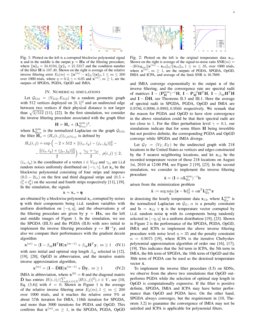 Spatially distributed networks (SDNs) have been widely used in (wireless) sensor networks, drone fleets, smart grids and many real world applications [1]–[4]. An SDN has a large amount of agents and each agent equipped with a data processing subsystem having limited data storage and computation power and a communication subsystem for data exchanging to its “neighboring” agents within communication range. The topology of an SDN can be described by a connected, undirected and unweighted finite graph G:=(V,E) with a vertex in V representing an agent and an edge in E between vertices indicating that the corresponding agents are within some range in the spatial space. In this letter, we consider SDNs equipped with a communication subsystem at each agent to directly communicate between two agents if the geodesic distance between their corresponding vertices i,j∈V is at most L,

can be implemented at vertex level, and the output at a vertex i∈V is a “weighted” sum of the input in its ω(H)-neighborhood,

For SDNs with communication range L≥ω(H), the above implementation at vertex level provides an essential tool for the filtering procedure (I.3), in which each agent i∈V has equipped with subsystems to store H(i,j) and x(j) with ρ(j,i)≤ω(H), to compute addition and multiplication in (I.4), and to exchange data to its neighboring agents j∈V satisfying ρ(j,i)≤ω(H).

For an invertible filter H, the implementation of the inverse filtering procedure

A conventional approach to implement the inverse filtering procedure (I.5) is via the iterative quasi-Newton method

depending on maximal and minimal singular values of the filter

H [12, 20], and the approximation filter in the iterative matrix inverse approximation algorithm (IMIA) could be selected under a strong assumption on H [10, Theorem 3.2]. The proposed PGDA (II.8) is the quasi-Newton method (I.6) with P−2HHT being selected as the approximation filter G, see (II.3). Comparing with the quasi-Newton methods in [10, 12, 13, 14, 16, 17, 19, 20], one significance of the proposed PGDA is that the sequence x(m),m≥0, in (II.8) converges exponentially to the output x of the inverse filtering procedure (I.5) whenever the filter H is invertible, see Theorems II.3 and III.1.

For a time-varying filter the quasi-Newton method (I.6) to implement their inverse filtering on SDNs should be self-adaptive as each agent does not have the whole time-varying filter and it only receives the submatrix of the filter within the communication range [4]. The IMIA algorithm is self-adaptive [10, Eq. (3.4)], and the gradient descent method [12, 20] is not self-adaptive in general except that the step length β can be chosen to be time-independent. The second significance of the proposed PGDA is its self-adaptivity and compatibility to implement the time-varying inverse filtering procedure on our SDNs, as the preconditioner PH (and hence the approximation filter P−2HHT in the PGDA) is constructed at vertex level with confined communication range, see Algorithm II.1.

Let G:=(V,E) be a connected, undirected and unweighted graph and H=(H(i,j))i,j∈V be a filter on the graph G with geodesic-width ω(H). In this section, we induce a diagonal matrix PH with diagonal elements PH(i,i),i∈V, given by

where we denote the set of all s-hop neighbors of a vertex i∈V by B(i,s)={j∈V, ρ(j,i)≤s}, s≥0. The above diagonal matrix PH can be evaluated at vertex level, and constructed on SDNs with communication range L≥ω(H), see Algorithm II.1.

For symmetric matrices A and B, we use B⪯A and B≺A to denote the positive semidefiniteness and positive definiteness of their difference A−B respectively. A crucial observation about the diagonal matrix PH is as follows.

This proves (II.2) and completes the proof. ∎

Denote the spectral radius of a matrix A by r(A). By Theorem II.1, P−2HHT is an approximation filter to the inverse filter H−1 in the sense that

and denote the zero and identity matrices of appropriate size by O and I respectively. One may verify that

Then we may consider the conclusion (II.2) for the preconditioner PH as a distributed version of the well-known matrix dominance (II.4) for the graph filter H.

associated with the inverse filtering procedure (I.5), and we solve the following right preconditioned linear system

via the gradient descent algorithm

with initial z(0). The above iterative algorithm can be reformulated as a quasi-Newton method (I.6) with G replaced by P−2HHT,

with initial x(0). We call the above approach to implement the inverse filtering procedure (I.5) by the preconditioned gradient descent algorithm, or PGDA for abbreviation.

In addition to the exponential convergence in Theorem II.3, the PGDA is that each iteration can be implemented at vertex level, see Algorithm II.2. Therefore for an invertible filter H with ω(H)≤L, the PGDA (II.8) can implement the inverse filtering procedure (I.5) on SDNs with each agent only storing, computing and exchanging the information in a L-hop neighborhood.

In this section, we consider implementing the inverse filtering procedure (I.5) associated with a positive definite filter H=(H(i,j))i,j∈V on a connected, undirected and unweighted graph G. Define the diagonal matrix PsymH with diagonal entries

We remark that the normalized matrix in (III.2) associated with a diffusion matrix has been used to understand diffusion process [21], and the one corresponding to the Laplacian LG on the graph G is half of its normalized Laplacian LsymG:=(DG)−1/2LG(DG)−1/2, where DG is degree matrix of G [11]. Similar to the PGDA (II.8), we propose the following symmetric preconditioned gradient descent algorithm, or SPGDA for abbreviation,

with initial x(0), to solve the following preconditioned linear system

Comparing with the PGDA (II.8), the SPGDA for a positive definite graph filter has less computation and communication cost in each iteration and it also can be implemented at vertex level, see Algorithm III.1.

Similar to the proof of Theorem II.3, we have

Let G512=(V512,E512) be a random geometric graph with 512 vertices deployed on [0,1]2 and an undirected edge between two vertices if their physical distance is not larger than √2/512 [11, 22]. In the first simulation, we consider the inverse filtering procedure associated with the graph filter

[−γ,γ]. Let xo be the blockwise polynomial consisting of four strips and imposes (0.5−2ix) on the first and third diagonal strips and (0.5+i2x+i2y) on the second and fourth strips respectively [11, 19]. In the simulation, the signals

are obtained by a blockwise polynomial xo corrupted by noises η

with their components being i.i.d. random variables with uniform distribution on

[−η,η], and the observations y of the filtering procedure are given by y=Hx, see the left and middle images of Figure 1. In the simulation, we use the SPGDA (III.3) and the PGDA (II.8) with zero initial to implement the inverse filtering procedure y↦H−1y, and also we compare their performances with the gradient decent algorithm

with zero initial and optimal step length βop selected in [12, 19, 20], OpGD in abbreviation, and the iterative matrix inverse approximation algorithm,

IMIA in abbreviation, where x(0)=0 and the diagonal matrix ~D has entries H(i,i)/(∑ρ(j,i)≤2|H(i,j)|2),i∈V, see [10, Eq. (3.4)] with ~σ=0. Shown in Figure 1 is the average of the relative inverse filtering error E2(m),1≤m≤200 over 1000 trials, and it reaches the relative error 5% at about 57th iteration for IMIA, 118th iteration for SPGDA, and more than 3000 iterations for PGDA and OpGD. This confirms that x(m),m≥1, in the SPGDA, PGDA, OpGD and IMIA converge exponentially to the output x of the inverse filtering, and the convergence rate are spectral radii of matrices I−(PsymH)−1H, I−P−2HHTH, I−βopHTH and I−~DH, see Theorems II.3 and III.1. Here the average of spectral radii in SPGDA, PGDA, OpGD and IMIA are 0.9786,0.9996,0.9993,0.9566 respectively. We remark that the reason for PGDA and OpGD to have slow convergence in the above simulation could be that their spectral radii are too close to 1. For the filter perturbation level γ=0.1, our simulations indicate that for some filters H being invertible but not positive definite, the corresponding PGDA and OpGD converge while SPGDA and IMIA diverge.

Let GT=(VT,ET) be the undirected graph with 218 locations in the United States as vertices and edges constructed by the 5 nearest neighboring locations, and let x12 be the recorded temperature vector of those 218 locations on August 1st, 2010 at 12:00 PM, see Figure 2 [19, 23]. In the second simulation, we consider to implement the inverse filtering procedure

arisen from the minimization problem

in denoising the hourly temperature data x12, where LsymGT is the normalized Laplacian on GT, α is a penalty constraint and b=x12+η is the temperature vector corrupted by i.i.d. random noise η with its components being randomly selected in [−η,η] in a uniform distribution [19, 23]. Shown in Figure 2 is the performance of the SPGDA, PGDA, OpGD, IMIA and ICPA to implement the above inverse filtering procedure with noise level η=35 and the penalty constraint α=0.9075 [19], where ICPA is the iterative Chebyshev polynomial approximation algorithm of order one [16, 17, 19]. This indicates that the 3rd term in ICPA, the 5th term in IMIA, the 8th term of SPGDA, the 10th term of OpGD and the 30th term of PGDA can be used as the denoised temperature vector ~x.

To implement the inverse filter procedure (I.5) on SDNs, we observe from the above two simulations that OpGD outperforms PGDA while the selection of optimal step length in OpGD is computationally expensive. If the filter is positive definite, SPGDA, IMIA and ICPA may have better performance than OpGD and PGDA have. On the other hand, SPGDA always converges, but the requirement in [10, Theorem 3.2] to guarantee the convergence of IMIA may not be satisfied and ICPA is applicable for polynomial filters.