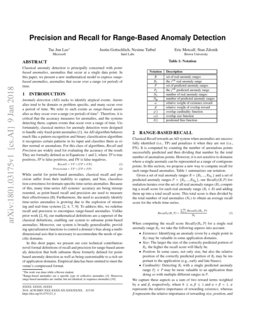 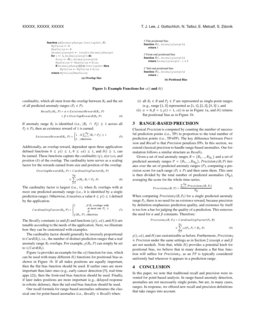 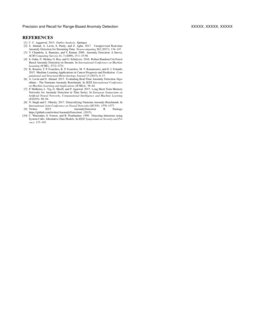 We consider the problem of detecting anomalies in a large dataset. We pr...
Parikshit Gopalan, et al. ∙

A Discriminative Framework for Anomaly Detection in Large Videos

While sentence anomalies have been applied periodically for testing in N...
Qinxuan Wu, et al. ∙

Anomaly detection is concerned with a wide range of applications such as...
Sangkeum Lee, et al. ∙

. An AD algorithm behaves much like a pattern recognition and binary classification algorithm: it recognizes certain patterns in its input and classifies them as either normal or anomalous. For this class of algorithms,

While useful for point-based anomalies, classical recall and precision suffer from their inability to capture, and bias, classification correctness for domain-specific time-series anomalies. Because of this, many time-series AD systems’ accuracy are being misrepresented, as point-based recall and precision are used to measure their effectiveness (Singh and Olinsky, 2017). Furthermore, the need to accurately identify time-series anomalies is growing due to the explosion of streaming and real-time systems (Twitter, 2015; Malhotra et al., 2015; Guha et al., 2016; Ahmad et al., 2017; Lee et al., 2018). To address this, we redefine recall and precision to encompass range-based anomalies. Unlike prior work (Lavin and Ahmad, 2015; Ahmad et al., 2017), our mathematical definitions are a superset of the classical definitions, enabling our system to subsume point-based anomalies. Moreover, our system is broadly generalizable, providing specialization functions to control a domain’s bias along a multi-dimensional axis that is necessary to accommodate the needs of specific domains.

Classical Recall rewards an AD system when anomalies are successfully identified (i.e., TP) and penalizes it when they are not (i.e., FN). It is computed by counting the number of anomalous points successfully predicted and then dividing that number by the total number of anomalous points. However, it is not sensitive to domains where a single anomaly can be represented as a range of contiguous points. In this section, we propose a new way to compute recall for such range-based anomalies. Table 1 summarizes our notation.

When computing the recall score RecallT(Ri,P) for a single real anomaly range Ri, we take the following aspects into account:

We capture these aspects as a sum of two reward terms weighted by α and β, respectively, where 0≤α,β≤1 and α+β=1. α represents the relative importance of rewarding existence, whereas β represents the relative importance of rewarding size, position, and cardinality, which all stem from the overlap between Ri and the set of all predicted anomaly ranges (Pi∈P).

If anomaly range Ri is identified (i.e., |Ri∩Pj|≥1 across all Pj∈P), then an existence reward of 1 is earned.

The cardinality factor is largest (i.e., 1), when Ri overlaps with at most one predicted anomaly range (i.e., it is identified by a single prediction range). Otherwise, it receives a value 0≤γ()≤1 defined by the application.

The RecallT constants (α and β) and functions (γ(), ω(), and δ()) are tunable according to the needs of the application. Next, we illustrate how they can be customized with examples.

The cardinality factor should generally be inversely proportional to Card(Ri), i.e., the number of distinct prediction ranges that a real anomaly range Ri overlaps. For example, γ(Ri,P) can simply be set to 1/Card(Ri).

When computing PrecisionT(R,Pi) for a single predicted anomaly range Pi, there is no need for an existence reward, because precision by definition emphasizes prediction quality, and existence by itself is too low a bar for judging the quality of a prediction. This removes the need for α and β constants. Therefore:

γ(), ω(), and δ() are customizable as before. Furthermore, PrecisionT ≡Precision under the same settings as in Section 2 (except α and β are not needed). Note that, while δ() provides a potential knob for positional bias, we believe that in many domains a flat bias function will suffice for PrecisionT, as an FP is typically considered uniformly bad wherever it appears in a prediction range.

In this paper, we note that traditional recall and precision were invented for point-based analysis. In range-based anomaly detection, anomalies are not necessarily single points, but are, in many cases, ranges. In response, we offered new recall and precision definitions that take ranges into account.

Acknowledgments. This research has been funded in part by Intel.