Pre-trained language model representations have been successful in a wide range of language understanding tasks. In this paper, we examine different strategies to integrate pre-trained representations into sequence to sequence models and apply it to neural machine translation and abstractive summarization. We find that pre-trained representations are most effective when added to the encoder network which slows inference by only 14 in machine translation show gains of up to 5.3 BLEU in a simulated resource-poor setup. While returns diminish with more labeled data, we still observe improvements when millions of sentence-pairs are available. Finally, on abstractive summarization we achieve a new state of the art on the full text version of CNN/DailyMail. 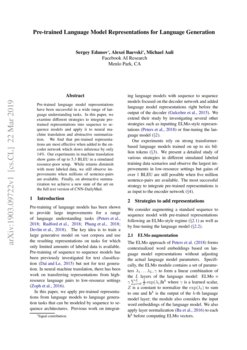 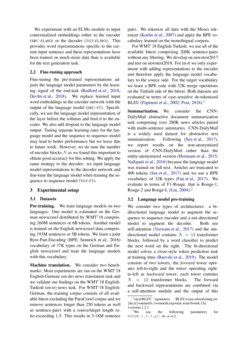 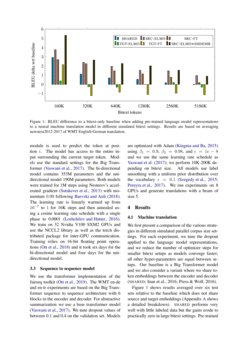 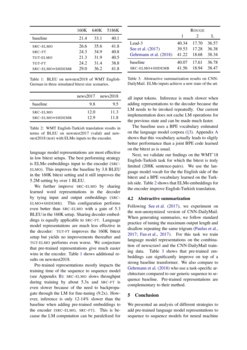 but not for text generation. In neural machine translation, there has been work on transferring representations from high-resource language pairs to low-resource settings

Our experiments rely on strong transformer-based language models trained on up to six billion tokens (§3). We present a detailed study of various strategies in different simulated labeled training data scenarios and observe the largest improvements in low-resource settings but gains of over 1 BLEU are still possible when five million sentence-pairs are available. The most successful strategy to integrate pre-trained representations is as input to the encoder network (§4).

We consider augmenting a standard sequence to sequence model with pre-trained representations following an ELMo-style regime (§2.1) as well as by fine-tuning the language model (§2.2).

We experiment with an ELMo module to input contextualized embeddings either to the encoder (src-elmo) or the decoder (tgt-elmo). This provides word representations specific to the current input sentence and these representations have been trained on much more data than is available for the text generation task.

We train language models on two languages: One model is estimated on the German newscrawl distributed by WMT’18 comprising 260M sentences or 6B tokens. Another model is trained on the English newscrawl data comprising 193M sentences or 5B tokens. We learn a joint Byte-Pair-Encoding (BPE; Sennrich et al., 2016) vocabulary of 37K types on the German and English newscrawl and train the language models with this vocabulary.

We consider two benchmarks: Most experiments are run on the WMT’18 English-German (en-de) news translation task and we validate our findings on the WMT’18 English-Turkish (en-tr) news task. For WMT’18 English-German, the training corpus consists of all available bitext excluding the ParaCrawl corpus and we remove sentences longer than 250 tokens as well as sentence-pairs with a source/target length ratio exceeding 1.5. This results in 5.18M sentence pairs. We tokenize all data with the Moses tokenizer Koehn et al. (2007) and apply the BPE vocabulary learned on the monolingual corpora.

For WMT’18 English-Turkish, we use all of the available bitext comprising 208K sentence-pairs without any filtering. We develop on newstest2017 and test on newstest2018. For en-tr we only experiment with adding representations to the encoder and therefore apply the language model vocabulary to the source side. For the target vocabulary we learn a BPE code with 32K merge operations on the Turkish side of the bitext. Both datasets are evaluated in terms of case-sensitive de-tokenized BLEU Papineni et al. (2002); Post (2018).222sacreBLEU signatures: BLEU+case.mixed+lang.en-{de,tr}+numrefs.1+smooth.exp+test.wmt18+tok.13a +version.1.2.1

transformer blocks, followed by a word classifier to predict the next word on the right. The bi-directional model solves a cloze-style token prediction task at training time

(Baevski et al., 2019). The model consists of two towers, the forward tower operates left-to-right and the tower operating right-to-left as backward tower; each tower contains N=12 transformer blocks. The forward and backward representations are combined via a self-attention module and the output of this module is used to predict the token at position i. The model has access to the entire input surrounding the current target token. Models use the standard settings for the Big Transformer (Vaswani et al., 2017). The bi-directional model contains 353M parameters and the uni-directional model 190M parameters. Both models were trained for 1M steps using Nesterov’s accelerated gradient (Sutskever et al., 2013) with momentum 0.99 following Baevski and Auli (2018). The learning rate is linearly warmed up from 10−7 to 1 for 16K steps and then annealed using a cosine learning rate schedule with a single phase to 0.0001 (Loshchilov and Hutter, 2016)

. We train on 32 Nvidia V100 SXM2 GPUs and use the NCCL2 library as well as the torch distributed package for inter-GPU communication. Training relies on 16-bit floating point operations

We use the transformer implementation of the fairseq toolkit (Ott et al., 2019). The WMT en-de and en-tr experiments are based on the Big Transformer sequence to sequence architecture with 6 blocks in the encoder and decoder. For abstractive summarization we use a base transformer model (Vaswani et al., 2017). We tune dropout values of between 0.1 and 0.4 on the validation set. Models are optimized with Adam (Kingma and Ba, 2015) using β1=0.9, β2=0.98, and ϵ=1e−8 and we use the same learning rate schedule as Vaswani et al. (2017); we perform 10K-200K depending on bitext size. All models use label smoothing with a uniform prior distribution over the vocabulary ϵ=0.1 (Szegedy et al., 2015; Pereyra et al., 2017). We run experiments on 8 GPUs and generate translations with a beam of size 5.

We first present a comparison of the various strategies in different simulated parallel corpus size settings. For each experiment, we tune the dropout applied to the language model representations, and we reduce the number of optimizer steps for smaller bitext setups as models converge faster; all other hyper-parameters are equal between setups. Our baseline is a Big Transformer model and we also consider a variant where we share token embeddings between the encoder and decoder (shared; Inan et al., 2016; Press & Wolf, 2016).

Figure 1 shows results averaged over six test sets relative to the baseline which does not share source and target embeddings (Appendix A shows a detailed breakdown). shared performs very well with little labeled data but the gains erode to practically zero in large bitext settings. Pre-trained language model representations are most effective in low bitext setups. The best performing strategy is ELMo embeddings input to the encoder (src-elmo). This improves the baseline by 3.8 BLEU in the 160K bitext setting and it still improves the 5.2M setting by over 1 BLEU.

We further improve src-elmo by sharing learned word representations in the decoder by tying input and output embeddings (src-elmo+shdemb). This configuration performs even better than src-elmo with a gain of 5.3 BLEU in the 160K setup. Sharing decoder embeddings is equally applicable to src-ft. Language model representations are much less effective in the decoder: tgt-ft improves the 160K bitext setup but yields no improvements thereafter and tgt-elmo performs even worse. We conjecture that pre-trained representations give much easier wins in the encoder. Table 1 shows additional results on newstest2018.

Pre-trained representations mostly impacts the training time of the sequence to sequence model (see Appendix B): src-elmo slows throughput during training by about 5.3x and src-ft

is even slower because of the need to backpropagate through the LM for fine-tuning (9.2x). However, inference is only 12-14% slower than the baseline when adding pre-trained embeddings to the encoder (

src-elmo, src-ft). This is because the LM computation can be paralelized for all input tokens. Inference is much slower when adding representations to the decoder because the LM needs to be invoked repeatedly. Our current implementation does not cache LM operations for the previous state and can be made much faster.

The baseline uses a BPE vocabulary estimated on the language model corpora (§3). Appendix A shows that this vocabulary actually leads to sligtly better performance than a joint BPE code learned on the bitext as is usual.

Next, we validate our findings on the WMT’18 English-Turkish task for which the bitext is truly limited (208K sentence-pairs). We use the language model vocab for the the English side of the bitext and a BPE vocabulary learned on the Turkish side. Table 2 shows that ELMo embeddings for the encoder improve English-Turkish translation.

Following See et al. (2017), we experiment on the non-anonymized version of CNN-DailyMail. When generating summaries, we follow standard practice of tuning the maximum output length and disallow repeating the same trigram (Paulus et al., 2017; Fan et al., 2017). For this task we train language model representations on the combination of newscrawl and the CNN-DailyMail training data. Table 3 shows that pre-trained embeddings can significantly improve on top of a strong baseline transformer. We also compare to Gehrmann et al. (2018) who use a task-specific architecture compared to our generic sequence to sequence baseline. Pre-trained representations are complementary to their method.

Appendix B Training and inference speed