End-to-end deep-learning networks recently demonstrated extremely good perfor- mance for stereo matching. However, existing networks are difficult to use for practical applications since (1) they are memory-hungry and unable to process even modest-size images, (2) they have to be trained for a given disparity range. The Practical Deep Stereo (PDS) network that we propose addresses both issues: First, its architecture relies on novel bottleneck modules that drastically reduce the memory footprint in inference, and additional design choices allow to handle greater image size during training. This results in a model that leverages large image context to resolve matching ambiguities. Second, a novel sub-pixel cross- entropy loss combined with a MAP estimator make this network less sensitive to ambiguous matches, and applicable to any disparity range without re-training. We compare PDS to state-of-the-art methods published over the recent months, and demonstrate its superior performance on FlyingThings3D and KITTI sets. 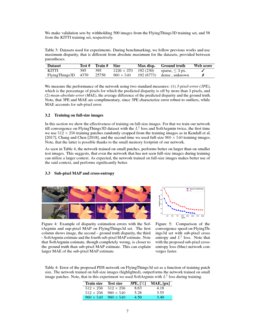 Despite the remarkable progress of deep learning in stereo matching, the...
Kumail Raza, et al. ∙

, and data-driven, and in particular, deep neural network based, methods

The first successes of neural networks for stereo matching were achieved by substitution of hand-crafted similarity measures with deep metrics Chen et al. (2015); Žbontar and LeCun (2015); Zbontar and LeCun (2016); Luo et al. (2016); Tulyakov et al. (2017) inside a legacy stereo pipeline for the post-processing (often Mei et al. (2011)). Besides deep metrics, neural networks were also used in other subtasks such as predicting a smoothness penalty in a CRF model from a local intensity pattern Seki and Pollefeys (2017); Knöbelreiter et al. (2017). In Shaked and Wolf (2017) a “global disparity” network smooth the matching cost volume and predicts matching confidences, and in Gidaris and Komodakis (2017) a network detects and fixes incorrect disparities.

. In this work, we propose to use a novel sup-pixel MAP approximation for inference which computes a weighted mean around the disparity with maximum posterior probability. It is more robust to erroneous modes in the distribution and allows to modify the disparity range without re-training.

Our contributions can be summarize as follows:

In the experimental section, we validate our contributions. In § 3.2 we show how the reduced memory footprint allows to train on full-size images and to leverage large image contexts to improve performance. In § 3.3 we demonstrate that, thanks to the proposed sub-pixel MAP and cross-entropy, we are able to modify the disparity range without re-training, and to improve the matching accuracy. Than, in § 3.4 we compare our method to state-of-the-art baselines and show that it has smallest 3-pixels error (3PE) and second smallest mean absolute error (MAE) on the FlyingThings3D set and ranked third and fourth on KITTI’15 and KITTI’12 sets respectively.

Our network takes as input the left and right color images {xL,xR} of size W×H and produces a “cost tensor” C=Net(xL,xR∣Θ,D) of size D2×W×H, where Θ are the model’s parameters, an D∈N is the maximum disparity.

The overall structure of the network and processing flow during training and inference are shown in Figure 1, and we can summarize for clarity the input/output to and from each of the modules:

Additional information such as convolution filter size or channel numbers is provided in the Supplementary materials.

According to the taxonomy in Scharstein and Szeliski (2001) all traditional stereo matching methods consist of (1) matching cost computation, (2) cost aggregation, (3) optimization, and (4) disparity refinement steps. In the proposed network, the embedding and the matching modules are roughly responsible for the step (1) and the regularization module for the steps (2-4).

Besides the matching module, there are several other design choices that reduce test and training memory footprint of our network. In contrast to Kendall et al. (2017) we use aggressive four-times sub-sampling in the embedding module, and the hourglass DNN we use for regularization module produces probabilities only for even disparities. Also, after each convolution and transposed convolution in our network we place Instance Normalization (IN) Ulyanov et al. (2016)

instead of Batch Normalization (BN) as show in the Supplementary materials, since we use individual full-size images during training.

The core of state-of-the-art methods Kendall et al. (2017); Zhong et al. (2017); Jie et al. (2018); Chang and Chen (2018) is the 3D convolutions Hourglass network used as regularization module, that takes as input a tensor composed of concatenated left-right image descriptor for all possible disparity values. The size of this tensor makes such networks have a huge memory footprint during inference.

This module is inspired by CRL Pang et al. (2017) and DispNetCorr1D Pang et al. (2017); Mayer et al. (2016) which control the memory footprint (as shown in Table 1 by feeding correlation results instead of concatenated embeddings to the Hourglass network and by Zagoruyko and Komodakis (2015) that show superior performance of joint left-right image embedding. We also borrowed some ideas from the bottleneck module in ResNet He et al. (2016), since it also encourages compressed intermediate representations.

This SoftArgmin approximates a sub-pixel maximum a posteriori (MAP) solution when the distribution is unimodal and symmetric. However, as illustrated in Figure 3, this strategy suffers from two key weaknesses: First, when these assumptions are not fulfilled, for instance if the posterior is multi-modal, this averaging blends the modes and produces a disparity estimate far from all of them. Second, if we want to apply the model to a greater disparity range without re-training, the estimate may degrade even more due to additional modes.

The authors of Kendall et al. (2017) argue that when the network is trained with the SoftArgmin, it adapts to it during learning by rescaling its output values to make the distribution unimodal. However, the network learns rescaling only for disparity range used during training. If we decide to change the disparity range during the test, we will have to re-train the network.

To address both of these drawbacks, we propose to use for inference a sub-pixel MAP approximation that computes a weighted mean around the disparity with maximum posterior probability as

with δ a meta-parameter (in our experiments we choose δ=4 based on small scale grid search experiment on the validation set). The approximation works under assumption that the distribution is symmetric in a vicinity of a major mode.

In contrast to the SoftArgmin, the proposed sup-pixel MAP is used only for inference. During training we use the posterior disparity distribution and the sub-pixel cross-entropy loss discussed in the next section.

In this work, we propose a novel sub-pixel cross-entropy that provides faster convergence and better accuracy. The target distribution of our cross-entropy loss is a discretized Laplace distribution centered at the ground-truth disparity dgt, shown in Figure 3 and computed as

where b is a diversity of the Laplace distribution (in our experiments we set b=2, reasoning that the distribution should reasonably cover at least several discrete disparities). With this target distribution we compute cross-entropy as usual

The proposed sub-pixel cross-entropy is different from soft cross entropy Luo et al. (2016), since in our case probability in each discrete location of the target distribution is a smooth function of a distance to the sub-pixel ground-truth. This allows to train the network to produce a distribution from which we can compute sub-pixel disparities using our sub-pixel MAP.

Our experiments are done with the PyTorch framework

PyTorch . We initialize weights and biases of the network using default PyTorch initialization and train the network as shown in Table 2

. During the training we normalize training patches to zero mean and unit variance. The optimization is performed with the RMSprop method with standard settings.

We guarantee reproducibility of all experiments in this section by using only available data-sets, and making our code available online under open-source license after publication.

The FlyingThings3D set suffers from two problems: (1) as noticed in Pang et al. (2017); Zhang et al. (2018), some images have very large (up to 103) or negative disparities; (2) some images are rendered with black dots artifacts. For the training we use only images without artifacts and with disparities ∈[0,255].

We noticed that this is dealt with in some previous publications by processing the test set using the ground truth for benchmarking, without mentioning it. Such pre-processing may consist of ignoring pixels with disparity >192 Chang and Chen (2018), or discarding images with more than 25% of pixels with disparity >300 Pang et al. (2017); Liang et al. (2018). Although this is not commendable, for the sake of comparison we followed the same protocol as Chang and Chen (2018) which is the method the closest to ours in term of performance. In all other experiments we use the unaltered test set.

We measure the performance of the network using two standard measures: (1) 3-pixel-error (3PE), which is the percentage of pixels for which the predicted disparity is off by more than 3 pixels, and (2) mean-absolute-error (MAE)

, the average difference of the predicted disparity and the ground truth. Note, that 3PE and MAE are complimentary, since 3PE characterize error robust to outliers, while MAE accounts for sub-pixel error.

In this section we show the effectiveness of training on full-size images. For that we train our network till convergence on FlyingThings3D dataset with the L1 loss and SoftArgmin twice, the first time we use 512×256 training patches randomly cropped from the training images as in Kendall et al. (2017); Chang and Chen (2018), and the second time we used full-size 960×540 training images. Note, that the latter is possible thanks to the small memory footprint of our network.

As shown in Table 5, the substitution leads to the reduction of the 3PE and slight increase of the MAE. The latter probably happens because in the erroneous area SoftArgmin estimate are completely wrong, but nevertheless closer to the ground truth since it blends all distribution modes, as shown in Figure 5.

Next, we train the network with the sub-pixel cross-entropy loss and compare it to the network trained with SoftArgmin and the L1 loss. As show in Table 5, the former network has much smaller 3PE and only slightly larger MAE. The convergence speed with sub-pixel cross-entropy is also much faster than with L1 loss as shown in Figure 5. Interestingly, in Kendall et al. (2017) also reports faster convergence with one-hot cross-entropy than with L1 loss, but contrary to our results, they found that L1 provided smaller 3PE.

In this section we show the effectiveness of our method, compared to the state-of-the-art methods. For KITTI, we computed disparity maps for the test sets with withheld ground truth, and uploaded the results to the evaluation web site. For the FlyingThings3D set we evaluated performance on the test set ourselves, following the protocol of Chang and Chen (2018) as explained in § 3.1.

FlyingThings3D set benchmarking results are shown in Table 1. Notably, the method we propose has lowest 3PE error and second lowest MAE. Moreover, in contrast to other methods, our method has small memory footprint, number of parameters, and it allows to change the disparity range without re-training.

In this work we addressed two issues precluding the use of deep networks for stereo matching in many practical situations in spite of their excellent accuracy: their large memory footprint, and the inability to adjust to a different disparity range without complete re-training.

We showed that by carefully revising conventionally used networks architecture to control the memory footprint and adapt analytically the network to the disparity range, and by using a new loss and estimator to cope with multi-modal posterior and sub-pixel accuracy, it is possible to resolve these practical issues and reach state-of-the-art performance.