Posterior properties of the Weibull distribution for censored data

The Weibull distribution is one of the most used tools in reliability analysis. In this paper, assuming a Bayesian approach, we propose necessary and sufficient conditions to verify when improper priors lead to proper posteriors for the parameters of the Weibull distribution in the presence of complete or right-censored data. Additionally, we proposed sufficient conditions to verify if the obtained posterior moments are finite. These results can be achieved by checking the behavior of the improper priors, which are applied in different objective priors to illustrate the usefulness of the new results. As an application of our theorem, we prove that if the improper prior leads to a proper posterior, the posterior mean, as well as other higher moments of the scale parameter, are not finite and, therefore, should not be used. 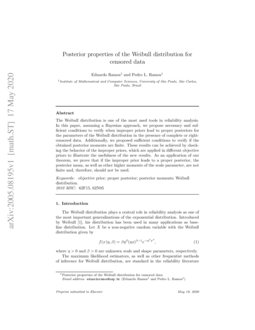 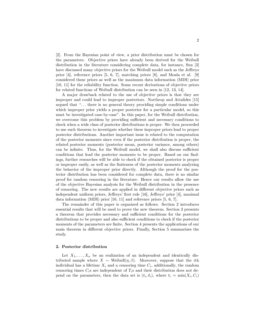 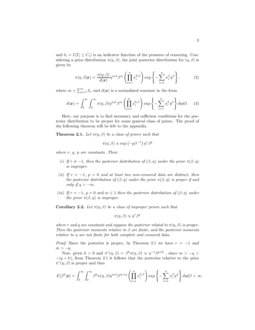 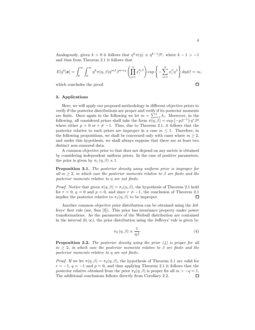 The use of objective prior in Bayesian applications has become a common ...
Pedro L. Ramos, et al. ∙

The choice of the prior distribution is a key aspect of Bayesian analysi...
Jose A. Ordoñez, et al. ∙

Objective Bayesian Analysis for the Differential Entropy of the Gamma Distribution

The use of entropy related concepts goes from physics, such as in statis...
Eduardo Ramos, et al. ∙

A matching prior at level 1-α is a prior such that an associated 1-α cre...
Haosui Duanmu, et al. ∙

The Weibull distribution plays a central role in reliability analysis as one of the most important generalizations of the exponential distribution. Introduced by Weibull

weibull1951statistical, his distribution has been used in many applications as baseline distribution. Let X

where η>0 and β>0 are unknown scale and shape parameters, respectively.

The maximum likelihood estimators, as well as other frequentist methods of inference for Weibull distribution, are standard in the reliability literature

teimouri2013comparison. From the Bayesian point of view, a prior distribution must be chosen for the parameters. Objective priors have already been derived for the Weibull distribution in the literature considering complete data, for instance, Sun sun1997note have discussed many objective priors for the Weibull model such as the Jeffreys prior jeffreys1946theory, reference priors bernardo1979a; bernardo2005; berger2015, matching priors tibshirani1989, and Moala et al. moala2009note considered these priors as well as the maximum data information (MDI) prior zellner1; zellner2 for the reliability function. Some recent derivations of objective priors for related functions of Weibull distribution can be seen in lee2015noninformative; kang2017noninformative; lee2017objective.

A major drawback related to the use of objective priors is that they are improper and could lead to improper posteriors. Northrop and Attalides northrop2016 argued that “…

The remainder of this paper is organized as follows. Section 2 introduces essential results that will be used to prove the new theorem. Section 3 presents a theorem that provides necessary and sufficient conditions for the posterior distributions to be proper and also sufficient conditions to check if the posterior moments of the parameters are finite. Section 4 presents the applications of our main theorem in different objective priors. Finally, Section 5 summarizes the study.

Let X1,…,Xn be an realization of an independent and identically distributed sample where X∼ Weibull(η,β). Moreover, suppose that the ith individual has a lifetime Xi and a censoring time Ci, additionally, the random censoring times Cis are independent of Tis and their distribution does not depend on the parameters, then the data set is (ti,δi), where ti=min(Xi,Ci) and δi=I(Ti≤Ci) is an indicator function of the presence of censoring. Considering a prior distribution π(η,β), the joint posterior distribution for (η,β) is given by

where m=∑ni=1δi, and d(x) is a normalized constant in the form

Here, our purpose is to find necessary and sufficient conditions for the posterior distribution to be proper for some general class of priors. The proof of the following theorem will be left to the appendix.

Let π(η,β) be a class of priors such that

where r, q, p are constants. Then:

Let π(η,β) be a class of improper priors such that

which concludes the proof. ∎

Here, we will apply our proposed methodology in different objective priors to verify if the posterior distributions are proper and verify if its posterior moments are finite. Once again in the following we let m=∑ni=1δi. Moreover, in the following, all considered priors shall take the form π(η,β)=exp(−pβ−1)ηrβq where either p=0 or r≠−1. Thus, due to Theorem 2.1, it follows that the posterior relative to such priors are improper in a case m≤1. Therefore, in the following propositions, we shall be concerned only with cases where m≥2, and under this hypothesis, we shall always suppose that there are at least two distinct non-censored data.

A common objective prior to that does not depend on any metric is obtained by considering independent uniform priors. In the case of positive parameters, the prior is given by π1(η,β)∝1.

The most well-known objective prior was introduced by Jeffreys jeffreys1946theory which carries his name. The Jeffreys prior is obtained from the square root of the determinant of the Fisher information matrix I(η,β), that is

where I(η,β) is the Fisher information matrix given by

This prior is widely used due to its invariance property under one-to-one transformations of parameters. For the Weibull distribution, computing the square root of the determinant of I(η,β) we have that

Zellner zellner1; zellner2 introduced an objective prior based on the Shannon entropy. The Maximal Data Information Prior emphasis the information in the likelihood function, therefore, its information is weak in comparison with data information. This prior is obtained by

where H(η,β) is the solution of the information measure given by

The MDI prior has invariance properties only for linear transformations on the parameters. For the Weibull distribution

The posterior distribution obtained from the MDI prior (9) is improper for all m≥2.

. His prior is referred to as reference prior, and it is obtained under the idea of maximizing the expected Kullback-Leibler divergence between the posterior distribution and the prior. The reference prior provides posterior distribution with interesting properties, such as invariance, consistent marginalization, and consistent sampling properties.

The algorithm to derive the reference prior can be obtained in detail throughout Bernardo bernardo2005. However, since the Fisher information I(η,β) has a particular form, we will present one corollary that allows obtaining the reference priors quickly for the IW distribution.

Considering that δ is the parameter of interest and λ is the nuisance parameter, suppose the posterior distribution of (δ,λ) is asymptotically normal with dispersion matrix S(δ,λ)=I−1(δ,λ). If the parameter space of δ is independent of λ and the functions Sδ,δ(δ,λ) and Iλ,λ(δ,λ) can be factorize in the form

then the reference prior when δ is the parameter of interest and λ is the nuisance parameter is simply πδ(δ,λ)=fδ(δ)gλ(λ) even if π(λ|δ) is not proper.

The results presented above can be easily extended to other commonly used parametrization. For instance, considering η=1/θ, the PDF is given by

where m=∑ni=1δi, and d(x) is a normalized constant in the form

In the following we consider the case where there are at least two distinct non-censored data. An analogous theorem can be proved for m≤1 by using item (iii) of Theorem 2.1.

Let π(θ,β) be a class of improper priors such that

where r, q and p are constants and suppose that at least two non-censored data are distinct. Then the posterior distribution of (β,θ) under the prior π(β,θ) is improper in case r≠−1, and is proper if and only if r=−1 and q>−m in case p=0.

Thus, through the change of variables η=θ−1 it follows that

Let π(η,β) be a class of improper priors such that

Just as in Theorem 4.1, the proof is direct from Theorem 2.2 combined with an application of the change of variables η=θ−1 in the integral. ∎

Note that, from the above definiton, if for some c∈R+∗ we have that limx→ag(x)h(x)=c, then it will follow that g(x)∝x→ah(x). The following proposition is a direct consequence of the above definition, where the functions f1, f2, g1 and g2 bellow are supposed to be positive in their domain U⊂R.

The following propositions gives us a relation between Definition 5.1 and Definition 5.2 and its proofs can be seen in Ramos et al. ramos2017.

During this proof we shall use the fact that ∫∞0xa−1exp(−bx)dx<∞ if and only if a>0, which can be easily proved for a≤0 by using Proposition 5.3 and the fact that exp(−bu)∝α→01, and for a>0 by the change of variables bx=y in the integral and the definition of Gamma function.

Before we prove the items we develop the integrals used. From the hypothesis it follows that

Thus, from the change of variable u=∑ni=1xβiηβ in the integral it follows that

On the other hand, if we denote xmax=max1≤i≤nxi and if k∈N correspond to the number of indexes i∈{1,⋯,n} such that xi=xmax then, since limβ→∞xβixβmax=0 for all xi<xmax it follows that

and, moreover, trivially it follows that

Now let us suppose that r>−1. Therefore, from (13) and letting h=log⎛⎝(xmax)m∏ni=1xδii⎞⎠≥0 it follows that

and since by hypothesis of item (ii) there are at least two distinct non-censored data, it follows that h=log⎛⎝(xmax)m∏ni=1xδii⎞⎠>0 and thus by the last proportionality it follows that d(x)<∞ if and only if m+q>0, which concludes the proof of item (ii).