We consider a combined state and drift estimation problem for the linear stochastic heat equation. The infinite-dimensional Bayesian inference problem is formulated in terms of the Kalman-Bucy filter over an extended state space, and its long-time asymptotic properties are studied. Asymptotic posterior contraction rates in the unknown drift function are the main contribution of this paper. Such rates have been studied before for stationary non-parametric Bayesian inverse problems, and here we demonstrate the consistency of our time-dependent formulation with these previous results building upon scale separation and a slow manifold approximation. 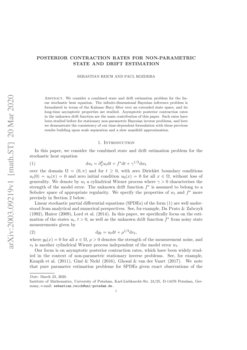 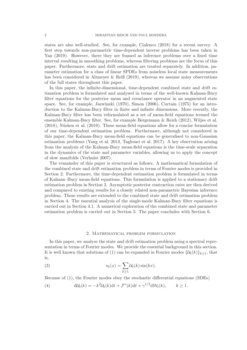 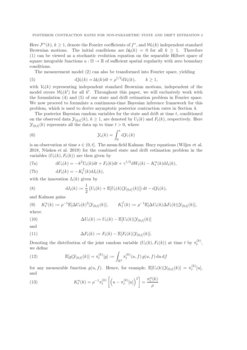 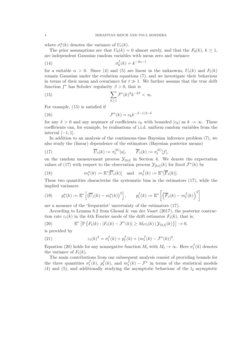 In this paper, we consider the combined state and drift estimation problem for the stochastic heat equation

over the domain Ω=(0,π) and for t≥0, with zero Dirichlet boundary conditions ut(0)=ut(π)=0 and zero initial condition u0(x)=0 for all x∈Ω, without loss of generality. We denote by wt a cylindrical Wiener process where γ>0 characterises the strength of the model error. The unknown drift function f∗ is assumed to belong to a Sobolev space of appropriate regularity. We specify the properties of wt and f∗ more precisely in Section 2 below.

1) are well understood from analytical and numerical perspectives. See, for example, Da Prato & Zabczyk (1992); Hairer (2009); Lord et al. (2014). In this paper, we specifically focus on the estimation of the states ut, t>0, as well as the unknown drift function f∗ from noisy state measurements given by

where y0(x)=0 for all x∈Ω, ρ>0 denotes the strength of the measurement noise, and vt is another cylindrical Wiener process independent of the model error wt.

Our focus is on asymptotic posterior contraction rates, which have been widely studied in the context of non-parametric stationary inverse problems. See, for example, Knapik et al. (2011); Giné & Nickl (2016); Ghosal & van der Vaart (2017). We note that pure parameter estimation problems for SPDEs given exact observations of the states are also well-studied. See, for example, Cialenco (2018) for a recent survey. A first step towards non-parametric time-dependent inverse problems has been taken in Yan (2019). However, there they are framed as inference problems over a fixed time interval resulting in smoothing problems, whereas filtering problems are the focus of this paper. Furthermore, state and drift estimation are treated separately. In addition, parameter estimation for a class of linear SPDEs from noiseless local state measurements has been considered in Altmeyer & Reiß (2019), whereas we assume noisy observations of the full states throughout this paper.

In this paper, we analyse the state and drift estimation problem using a spectral representation in terms of Fourier modes. We provide the essential background in this section. It is well known that solutions of (1) can be expanded in Fourier modes {Ut(k)}k≥1, that is,

Because of (1), the Fourier modes obey the stochastic differential equations (SDEs)

Here F∗(k), k≥1, denote the Fourier coefficients of f∗, and Wt(k) independent standard Brownian motions. The initial conditions are U0(k)=0 for all k≥1. Therefore (1) can be viewed as a stochastic evolution equation on the separable Hilbert space of square integrable functions u:Ω→R of sufficient spatial regularity with zero boundary conditions.

The measurement model (2) can also be transformed into Fourier space, yielding

with Vt(k) representing independent standard Brownian motions, independent of the model errors Wt(k′) for all k′. Throughout this paper, we will exclusively work with the formulation (4) and (5) of our state and drift estimation problem in Fourier space. We now proceed to formulate a continuous-time Bayesian inference framework for this problem, which is used to derive asymptotic posterior contraction rates in Section 4.

is an observation at time s∈(0,t]. The mean-field Kalman–Bucy equations (Wiljes et al., 2018; Nüsken et al., 2019) for the combined state and drift estimation problem in the variables (Ut(k),Ft(k)) are then given by

with the innovation It(k) given by

Denoting the distribution of the joint random variable (Ut(k),Ft(k)) at time t by π(k)t, we define

denotes the variance of

The prior assumptions are that U0(k)=0 almost surely, and that the F0(k), k≥1, are independent Gaussian random variables with mean zero and variance

for a suitable α>0. Since (4) and (5) are linear in the unknowns, Ut(k) and Ft(k) remain Gaussian under the evolution equations (7), and we investigate their behaviour in terms of their mean and covariance for t≫1. We further assume that the true drift function f∗ has Sobolev regularity β>0, that is

for any δ>0 and any sequence of coefficients ck with bounded |ck| as k→∞. These coefficients can, for example, be realisations of i.i.d. uniform random variables from the interval [−1,1].

In addition to an analysis of the continuous-time Bayesian inference problem (7), we also study the (linear) dependence of the estimators (Bayesian posterior means)

on the random measurement process Y(0,t] in Section 4. We denote the expectation values of (17) with respect to the observation process Y[0,t](k) for fixed F∗(k) by

These two quantities characterise the systematic bias in the estimators (17), while the implied variances

are a measure of the ‘frequentist’ uncertainty of the estimators (17).

According to Lemma 8.2 from Ghosal & van der Vaart (2017), the posterior contraction rate εt(k) in the kth Fourier mode of the drift estimator Ft(k), that is,

Equation (20) holds for any nonnegative function Mt with Mt→∞. Here σft(k) denotes the variance of Ft(k).

The main contributions from our subsequent analysis consist of providing bounds for the three quantities σft(k), pft(k), and mft(k)−F∗ in terms of the statistical models (4) and (5), and additionally studying the asymptotic behaviour of the l2 asymptotic contraction rate εt, defined by

in terms of the Sobolev regularity β of the true drift function f∗ and the variance of the prior characterised by α>0 in (14). Here, the l2 asymptotic contraction rate εt is to be understood in the sense that

for any nonnegative function Mt with Mt→∞. In physical space,

denotes the inverse Fourier transform of

A more general class of time-scaled prior variances over the unknown set of static parameters F(k) has been considered in Knapik et al. (2011). This more general class of prior distributions could be incorporated into our analysis as well. However, we restrict the subsequent analysis to the simpler case (14).

Before addressing the full time-dependent problem, we first consider the stationary drift estimation problem in which γ=0 and dUt(k)=0 in (4), giving rise to the forward model

for t≥0. The forward model (26) leads to a mildly ill-posed inverse problem. We follow a Bayesian approach by placing a Gaussian mean-zero prior with variance given by (14) on the Fourier coefficients of the unknown drift function. Let us summarise our assumptions for ease of reference in the following:

We assume that the Fourier coefficients of the true drift function satisfy (15). The prior coefficients, denoted by F0(k), are independent Gaussian random variables with mean zero, that is, ¯¯¯¯F0(k)=0, and with variance σf0(k) satisfying (14).

Let us denote the Bayesian posterior estimate of the drift at time t>0 by Ft(k), k≥1. We recall that Ft(k) is Gaussian for all t>0 provided F0(k) is Gaussian. Additionally, recall that we denote the mean of Ft(k) by ¯¯¯¯Ft(k) and the variance by σft(k). The Kalman–Bucy evolution equations (7) reduce to the following equations for the mean and the variance of the kth Fourier mode:

The initial conditions are provided by Assumption 3.1.

Alternatively, the Kalman–Bucy equations (27) for the mean and the variance can be reformulated as mean-field equations in Ft(k) directly, that is,

These equations are a special case of (7), and provide the starting point for numerical implementation in the form of the ensemble Kalman–Bucy filter (Bergemann & Reich, 2012), as well as extensions to nonlinear and non-Gaussian Bayesian inference problems (Yang et al., 2013; Taghvaei et al., 2017).

Denoting the expectation value of ¯¯¯¯Ft(k) with respect to the measurement noise Vt(k) by mft(k), we obtain

with initial condition mf0(k)=0. Equation (33) has the closed-form solution

Hence, based on (16), the l2-norm of the frequentist bias satisfies the asymptotic estimate

This result follows again from asymptotic bounds for infinite sums.

We finally investigate the time evolution of the frequentist variance pft(k). Starting from the stochastic differential equation

The initial variance is pf0(k)=0 for all k≥1. In order to analyse the solution behaviour of (37), we introduce Δpft(k):=σft(k)−pft(k) and find the associated evolution equation

from which we conclude that pft(k)<σft(k), and

In fact, the explicit solution of (37) is

The ‘frequentist’ uncertainty is characterised by

so the probability of the event

has probability tending to zero for any nonnegative function Mt with Mt→∞. Here N(m,σ)

denotes the Gaussian distribution with mean

Under Assumption 3.1, the posterior contraction rate (22) is given by

According to Lemma 8.2 from Ghosal & van der Vaart (2017), the posterior contraction rate εt(k) in each Fourier mode is provided by

The following white noise forward model has been investigated in

where Ξn(k) are i.i.d. Gaussian random variables with mean zero and variance one. The associated inference problem corresponds to a sequence of measurements with measurement error decreasing as 1/n. In our continuous-time problem, we obtain the same asymptotic rates as in the case considered above with p=2 under the formal equivalence t=n→∞.

We now return to the full dynamic model (4) subject to observations (5). We primarily wish to estimate the drift function F∗. However, because of the stochastic model errors in (4), we also need to estimate the states U∗t. We start with a careful analysis of the single mode system for both small- and large-k Fourier modes.

4.1. Analysis of the single-mode filtering problem

In this section, we conduct a careful analysis of the single-mode filtering and parameter estimation problem. We suppress the dependence on the mode number k, and introduce the parameter ϵ=k−2. The signal process is therefore given by

with given initial condition U0=0 almost surely. Observations of the process are given by

with Y0=0. The complete observation path up to time t is denoted by Y(0,t].

Recall that the mean-field Kalman–Bucy equations are given by (7). We again drop the dependence on the Fourier mode number k in the subsequent analysis. The mean-field equations (7) give rise to the following evolution equations in the conditional means ¯¯¯¯Ut:=πt[u] and ¯¯¯¯Ft:=πt[f]:

and introducing the shorthand μt=E∗[Ut]

, one is left with the ordinary differential equations

for the mean values (mut,mft), as well as

for the deviations (Δ¯¯¯¯Ut,Δ¯¯¯¯Ft). The expectation value μt satisfies the evolution equation

while the deviation ΔUt satisfies

We have thus decomposed the mean-field Kalman–Bucy equations into the analysis of the three subsystems (49), (51) and (55). Here, (51) describes the systematic bias in the Bayesian mean estimator, while (55) and (49) characterise the ‘frequentist’ and ‘Bayesian’ uncertainties, respectively.

We note that the equations in (49) are decoupled from (51) and (55). In fact, it is sufficient to look at the deterministic time evolution equations for the conditional variances

which are given by

The lemma follows from the decay property of

and the fact that Kft∼c/t for t sufficiently large with an appropriate constant c>0. In particular,

and for the gradient ∇Vt(Δput,Δpuft,Δpft)∈R3:

and ∂tVt becomes small relative to (67) since ddtKft∼−c/t2. Hence, for t again sufficiently large and with an appropriate constant C>0,

Lemma 4.1 implies that, as for the pure drift estimation problem, the Bayesian (filtering) variance asymptotically covers the ‘frequentist’ (data) variance.

In other words, the long-time variance of ΔUt is governed by σut=ϵγ/2, and of ΔFt by

up to higher-order terms in ϵ. Here we have introduced the new Kalman gain factor

We also notice that the Kalman gain factor Kut satisfies Kut=O(ϵ). See the Appendix for more details on the derivation of the reduced system (72).

The combined time-dependent linear equations (53) and (51) also give rise to a slow manifold, with the slow dynamics governed by μt=ϵF<span class="mjx-texatom" st