The presence of bacteria or fungi in the bloodstream of patients is abnormal and can lead to life-threatening conditions. A computational model based on a bidirectional long short-term memory artificial neural network, is explored to assist doctors in the intensive care unit to predict whether examination of blood cultures of patients will return positive. As input it uses nine monitored clinical parameters, presented as time series data, collected from 2177 ICU admissions at the Ghent University Hospital. Our main goal is to determine if general machine learning methods and more specific, temporal models, can be used to create an early detection system. This preliminary research obtains an area of 71.95 the potential of temporal neural networks in this context. 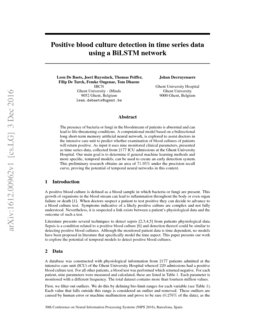 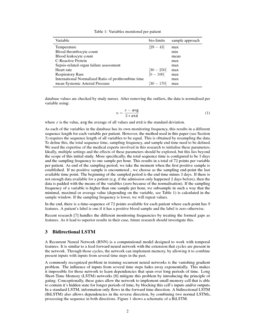 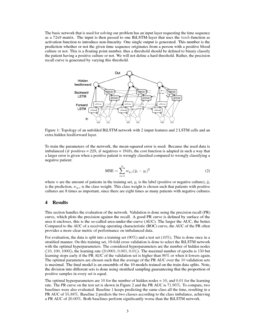 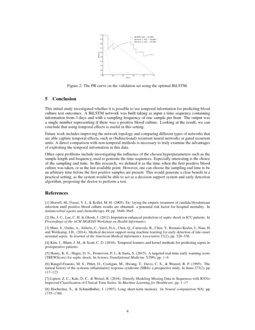 Early detection of COVID-19 is an ongoing area of research that can help...
Omid Rohanian, et al. ∙

Deep Learning to Attend to Risk in ICU

A positive blood culture is defined as a blood sample in which bacteria or fungi are present. This growth of organisms in the blood stream can lead to inflammation throughout the body or even organ failure or death [1]. When doctors suspect a patient to test positive they can decide to advance to a blood culture test. Symptoms indicative of a likely positive culture are complex and not fully understood. Nevertheless, it is suspected a link exists between a patient’s physiological data and the outcome of such a test.

A database was constructed with physiological information from 2177 patients admitted at the intensive care unit (ICU) of the Ghent University Hospital whereof 229 admissions had a positive blood culture test. For all other patients, a blood test was performed which returned negative. For each patient, nine parameters were measured and calculated, these are listed in Table 1. Each parameter is monitored with a different frequency. The total dataset contains more than fourteen million values.

First, we filter out outliers. We do this by defining bio-limit ranges for each variable (see Table

1). Each value that falls outside this range is considered an outlier and removed. These outliers are caused by human error or machine malfunction and prove to be rare (0.276% of the data), as the database values are checked by study nurses. After removing the outliers, the data is normalised per variable using:

where x is the value, avg the average of all values and std

is the standard deviation.

As each of the variables in the database has its own monitoring frequency, this results in a different sequence length for each variable per patient. However, the method used in this paper (see Section 3) requires the sequence length of all variables to be equal. This is obtained by resampling the data. To define this, the total sequence time, sampling frequency, and sample end time need to be defined. We used the expertise of the medical experts involved in this research to initialise these parameters. Ideally, multiple settings and the effects of these parameters should be explored, but this lies beyond the scope of this initial study. More specifically, the total sequence time is configured to be 3 days and the sampling frequency to one sample per hour. This results in a total of 72

3 days. If there is not enough data available for a patient (e.g. if the admission only happened 2

days before), then the data is padded with the means of the variables (zero because of the normalisation). If the sampling frequency of a variable is higher than one sample per hour, we subsample in such a way that the minimal, maximal or average value (depending on the variable, see Table

1) is calculated in the sample window. If the sampling frequency is lower, we will repeat values.

In the end, there is a time-sequence of 72 points available for each patient where each point has 9 features. A patient’s label is one if it has a positive blood sample and the label is zero otherwise.

Recent research [7] handles the different monitoring frequencies by treating the formed gaps as features. As it lead to superior results in their case, future research should investigate this.

A Recurrent Neural Network (RNN) is a computational model designed to work with temporal features. It is similar to a feed forward neural network with the extension that cycles are present in the network. Through those cycles, the network can implement memory, by allowing it to combine present inputs with inputs from several time steps in the past.

A commonly recognized problem in training recurrent neural networks is the vanishing gradient problem. The influence of inputs from several time steps fades away exponentially. This makes it impossible for those network to learn dependencies that span over long periods of time. Long Short-Time Memory (LSTM) networks [8] mitigate this problem by introducing the principle of gating. Conceptionally, these gates allow the network to implement small memory cell that is able to contain it’s hidden state for longer periods of time, by blocking this cell’s inputs and/or outputs. In a standard LSTM, information only flows in the forward time direction. A bidirectional LSTM (BiLSTM) also allows dependencies in the reverse direction, by combining two normal LSTMs, processing the sequence in both directions. Figure

1 shows a schematic of a BiLSTM.

The basic network that is used for solving our problem has an input layer requesting the time sequence as a 72x9 matrix. The input is then passed to one BiLSTM-layer that uses the tanh

-function as activation function to introduce non-linearity. One single output is generated. This number is the prediction whether or not the given time sequence originates from a person with a positive blood culture or not. This is a floating point number, thus a threshold should be defined to binary classify the patient having a positive culture or not. We will not define a hard threshold. Rather, the precision recall curve is generated by varying this threshold.

To train the parameters of the network, the mean-squared error is used. Because the used data is imbalanced (# positives = 229, # negatives = 1948), the cost function is adapted in such a way that a larger error is given when a positive patient is wrongly classified compared to wrongly classifying a negative patient:

This section handles the evaluation of the network. Validation is done using the precision recall (PR) curve, which plots the precision against the recall. A good PR curve is defined by surface of the area it encloses, this is the so-called area-under-the-curve (AUC). The larger the AUC, the better. Compared to the AUC of a receiving operating characteristic (ROC) curve, the AUC of the PR often provides a more clear metric of performance on imbalanced data.

). This is done once in a stratified manner. On this training set, 10-fold cross validation is done to select the BiLSTM network with the optimal hyperparameters. The considered hyperparameters are the number of hidden nodes (

). The maximal number of epochs is

150 but learning stops early if the PR AUC of the validation set is higher than 90% or when it lowers again. The optimal parameters are chosen such that the average of the PR AUC over the 10 validation sets is maximal. The final model is an ensemble of the 10 models trained on the train data splits. Note, the division into different sets is done using stratified sampling guaranteeing that the proportion of positive samples in every set is equal.

The optimal hyperparameters are 10 for the number of hidden nodes = 10, and 0.01 for the learning rate. The PR curve on the test set is shown in Figure 2 and the PR AUC is 71.95%. To compare, two baselines were also evaluated. Baseline 1 keeps predicting the same class all the time, resulting in a PR AUC of 55.88%. Baseline 2 predicts the two classes according to the class imbalance, achieving a PR AUC of 20.00%. Both baselines perform significantly worse than the BiLSTM network.

This initial study investigated whether it is possible to use temporal information for predicting blood culture test outcomes. A BiLSTM network was built taking as input a time sequence containing information from 3 days and with a sampling frequency of one sample per hour. The output was a single number representing if there was a positive blood culture. Looking at the result, we can conclude that using temporal effects is useful in this setting.

Future work includes improving the network topology and comparing different types of networks that are able capture temporal effects, such as (bidirectional) recurrent neural networks or gated recurrent units. A direct comparison with non-temporal methods is necessary to truly examine the advantages of exploiting the temporal information in this data.

Other open problems include investigating the influence of the chosen hyperparameters such as the sample length and frequency, used to generate the time sequences. Especially interesting is the choice of the sampling end time. In this research, we defined it as the time when the first positive blood culture was taken, or as the last available point. However, one can choose the sampling end time to be an arbitrary time before the first positive samples are present. This would generate a clear benefit in a practical setting, as the system would be able to act as a decision support system and early detection algorithm, proposing the doctor to perform a test.