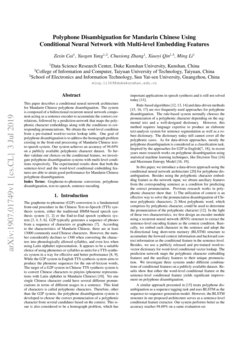 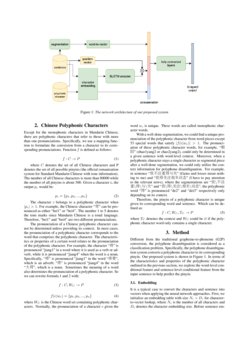 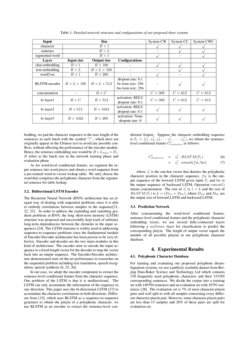 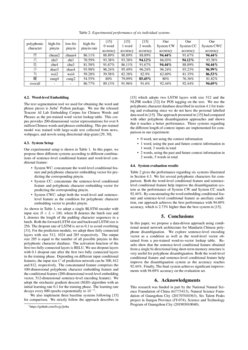 The grapheme-to-phoneme (G2P) conversion is a fundamental front-end procedure in the Chinese Text-to-Speech (TTS) synthesis system, either the traditional HMM-based speech synthesis system [1, 2] or the End-to-End speech synthesis system [3, 4, 5, 6]. G2P typically generates a sequence of phones from a sequence of characters or graphemes [7]. According to the characteristics of Mandarin Chinese, there are at least 13000 commonly used Chinese characters. However, the number considerably declines to 1300 when converting the characters into phonologically allowed syllables, and even less when using Latin alphabet representation. It appears to be a suitable choice of using phonemes or syllables as units for a TTS synthesis system in a way for effective and better performance [8, 9]

[10]. Yet one single Chinese character could have several different pronunciations in terms of different usages in a sentence. This kind of characters is called polyphonic characters. Therefore, other than the G2P system, the polyphone disambiguation system is developed to choose the correct pronunciation of a polyphonic character from several candidates based on the context. This issue is also considered to be a homograph problem, which has important applications in speech synthesis and is still not solved today [11].

are two frequently used approaches for polyphone disambiguation. The rule-based system normally chooses the pronunciation of a polyphonic character depending on the segmental text and a well-designed dictionary. However, this method requires language expertise to produce an elaborate text-analysis system for sentence segmentation as well as a robust dictionary. The dictionary today still cannot cover all the polyphonic cases. As for data-driven approaches, mostly the polyphone disambiguation is considered as a classification task. Inspired by the approaches for G2P in English

A similar approach presented in [15] treats polyphone disambiguation as a sequence tagging task and uses BLSTM as the sequence-to-sequence generation model. However, the BLSTM structure in our proposed architecture serves as a sentence-level conditional feature extractor. Our system performs better as the accuracy reaches 94.69% on a same evaluation set.

The character c belongs to a polyphonic character when |pc|>1. For example, the Chinese character “背” can be pronounced as either “bei1” or “bei4”. The number 1 to 5 denotes the tone marks since Mandarin Chinese is a tonal language. Therefore, “bei1” and “bei4” are two different pronunciations.

where WC is the Chinese word set containing polyphonic characters. Normally, the pronunciation of a character c given the word wc is unique. These words are called monophonic character words.

With a well-done segmentation, we could find a unique pronunciation of the polyphonic character from word pieces except 53 special words that satisfy |f(c|wc)|>1. The pronunciation of these polyphonic character words, for example, “朝阳” (zhao1yang2 or chao2yang2), could only be determined in a given sentence with word-level context. Moreover, when a polyphonic character stays a single character as segmental piece after a well-done segmentation, we could only utilize the context information for polyphone disambiguation. For example, in sentence “我不注重得与失” (Gains and losses mean nothing to me) and “我得关注相关动态” (I have to pay attention to the relevant news), where the segmentations are “我∖不注重∖得∖与∖失” and “我∖得∖关注∖相关∖动态”, the polyphonic word “得” is pronounced “de2” and “dei3” respectively only depending on its context.

Therefore, the pinyin of a polyphonic character is unique given its corresponding word and sentence. Which can be defined as:

where TC denotes the context and WC could be ∅ if the polyphonic character word only contains a single character.

Different from the traditional grapheme-to-phoneme (G2P) conversion, the polyphone disambiguation is considered as a classification problem. Specifically, the polyphone disambiguation system converts a polyphonic character to its corresponding pinyin. Our proposed system is shown in Figure 1. In terms of the characteristics and properties of the polyphonic character outlined in the previous section, we explore the word-level conditional feature and sentence-level conditional feature from the input sentence to help predict the pinyin.

It is a typical case to convert the characters and sentence into vectors when applying the neural network approaches. First, we initialize an embedding table with size Nc×Dc for character-to-vector lookup, where Nc is the number of all characters and Dc

|” , which does not originally appear in the Chinese text to avoid any possible conflicts, without affecting the performance of the encoder module. Hence, the sentence embedding size would be B×Lmax×Dc. B refers to the batch size in the network training phase and evaluation phase.

As for word-level conditional feature, we segment the input sentence into word pieces and obtain a word sequence from a pre-trained word-to-vector lookup table. We only choose the word that comprises the polyphonic character from the segmental sentence for table lookup.

The Recurrent Neural Network (RNN) architecture has an elegant way of dealing with sequential problems since it is able to embody correlations between samples in the sequence[21, 22, 23]

. In order to address the exploding and vanishing gradient problems in RNN, the long short-term memory (LSTM) structure was proposed and successfully kept track of arbitrary long-term dependencies between the elements in the input sequences

[24]. The LSTM structure is widely used in addressing sequence-to-sequence problems since the fundamental module of Encoder-Decoder architecture has been proven to be very effective. Encoder and decoder are the two main modules in this kind of architecture. The encoder aims to encode the input sequence to a fixed-length vector for the decoder to map the vector back into an output sequence. The Encoder-Decoder architecture demonstrated state-of-the-art performance in researches on the sequential problem including text translation, speech recognition, speech synthesis [6, 25, 26].

The text segmentation tool we used for obtaining the word and phrase pieces is Jieba111https://github.com/fxsjy/jieba Python package. We use the released Tencent AI Lab Embedding Corpus for Chinese Words and Phrases as the pre-trained word vector lookup table. This corpus provides 200-dimensional vector representations for over 8 million Chinese words and phrases embedding. This pre-trained model was trained with large-scale text collected from news, webpages, and novels using directional skip-gram [29, 30].

As shown in Table 1, we adopt a single BLSTM encoder with input size B×L×100, where B denotes the batch size and L denotes the length of the padding character sequences in a batch. Both the forward LSTM size and backward LSTM size is 256. The dropout rate of LSTM is set to 0.1 to avoid overfitting [31]

of prediction network can be 300, 612 and 812, respectively. The concatenated feature comprises the 100-dimensional polyphonic character embedding feature and the conditional feature (200-dimensional word-level embedding vector, 512-dimensional sentence-level encoding feature). We adopt the stochastic gradient descent (SGD) algorithm with an initial learning rate 0.1 for the training phase. The learning rate decays every 600 epochs exponentially to

We also implement three baseline systems following [15] for comparison. We strictly follow the approach describes in [15] which adopts two LSTM layers with size 512 and the NLPIR toolkit [32] for POS tagging on the text. We use the polyphonic character database described in section 4.1 for training and evaluating since we do not have the personal labelled data used in [15]. The approach presented in [15] had compared with other polyphone disambiguation approaches and shown that it reaches a better performance. Three systems regarding the different length of context inputs are implemented for comparison in our experiment: