We discuss estimation problems where a polynomial is observed under Ornstein Uhlenbeck noise over a long time interval. We prove local asymptotic normality (LAN) and specify asymptotically efficient estimators. We apply this to the following problem: feeding noise into the classical (deterministic) Hodgkin Huxley model of neuroscience, we are interested in asymptotically efficient estimation of the parameters of the noise process. 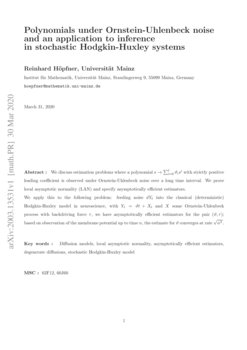 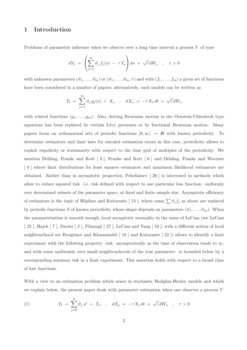 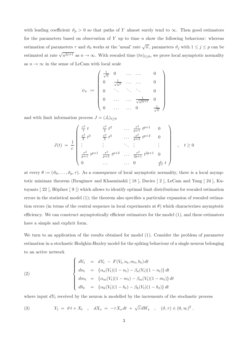 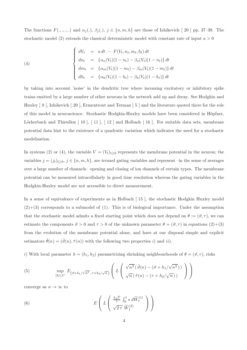 We consider the problem of estimation of the drift parameter of an ergod...
Alexander Gushchin, et al. ∙

We consider the problem of parameter estimation in a partially observed ...
Yury A. Kutoyants, et al. ∙

We consider the problem of the estimation of the mean function of an inh...
Samvel Gasparyan, et al. ∙

Asymptotic efficiency for covariance estimation under noise and asynchronicity

The estimation of the covariance structure from a discretely observed mu...
Sebastian Holtz, et al. ∙

with unknown parameters (ϑ1,…,ϑm) or (ϑ1,…,ϑm,τ) and with (f1,…,fm) a given set of functions have been considered in a number of papers; alternatively, such models can be written as

with related functions (g1,…,gm). Also, driving Brownian motion in the Ornstein-Uhlenbeck type equations has been replaced by certain Lévy processes or by fractional Brownian motion. Many papers focus on orthonormal sets of periodic functions [0,∞)→IR with known periodicity. To determine estimators and limit laws for rescaled estimation errors in this case, periodicity allows to exploit ergodicity or stationarity with respect to the time grid of multiples of the periodicity. We mention Dehling, Franke and Kott [3], Franke and Kott [6] and Dehling, Franke and Woerner [4] where limit distributions for least squares estimators and maximum likelihood estimators are obtained. Rather than in asymptotic properties, Pchelintsev [26]

is interested in methods which allow to reduce squared risk –i.e. risk defined with respect to one particular loss function– uniformly over determined subsets of the parameter space, at fixed and finite sample size. Asymptotic efficiency of estimators is the topic of Höpfner and Kutoyants

[13], where sums ∑ϑjfj as above are replaced by periodic functions S of known periodicity whose shape depends on parameters (ϑ1,…,ϑm). When the parametrization is smooth enough, local asymptotic normality in the sense of LeCam (see LeCam [23], Hajek [7], Davies [2], Pfanzagl [27], LeCam and Yang [24]; with a different notion of local neighbourhood see Ibragimov and Khasminskii [18] and Kutoyants [22]) allows to identify a limit experiment with the following property: risk –asymptotically as the time of observation tends to ∞, and with some uniformity over small neighbourhoods of the true parameter– is bounded below by a corresponding minimax risk in a limit experiment. This assertion holds with respect to a broad class of loss functions.

With a view to an estimation problem which arises in stochastic Hodgkin-Huxley models and which we explain below, the present paper deals with parameter estimation when one observes a process Y

with leading coefficient ϑp>0 so that paths of Y almost surely tend to ∞. Then good estimators for the parameters based on observation of Y up to time n show the following behaviour: whereas estimation of parameters τ and ϑ0 works at the ’usual’ rate √n, parameters ϑj with 1≤j≤p can be estimated at rate √n2j+1 as n→∞. With rescaled time (tn)t≥0, we prove local asymptotic normality as n→∞ in the sense of LeCam with local scale

and with limit information process J=(Jt)t≥0

at every θ:=(ϑ0,…,ϑp,τ). As a consequence of local asymptotic normality, there is a local asymptotic minimax theorem (Ibragimov and Khasminskii [18], Davies [2], LeCam and Yang [24], Kutoyants [22], Höpfner [9]) which allows to identify optimal limit distributions for rescaled estimation errors in the statistical model (1); the theorem also specifies a particular expansion of rescaled estimation errors (in terms of the central sequence in local experiments at θ) which characterizes asymptotic efficiency. We can construct asymptotically efficient estimators for the model (1), and these estimators have a simple and explicit form.

). Consider the problem of parameter estimation in a stochastic Hodgkin-Huxley model for the spiking behaviour of a single neuron belonging to an active network

by taking into account ’noise’ in the dendritic tree where incoming excitatory or inhibitory spike trains emitted by a large number of other neurons in the network add up and decay. See Hodgkin and Huxley [8], Izhikevich [20], Ermentrout and Terman [5] and the literature quoted there for the role of this model in neuroscience. Stochastic Hodgkin-Huxley models have been considered in Höpfner, Löcherbach and Thieullen [10], [11], [12] and Holbach [16]. For suitable data sets, membrane potential data hint to the existence of a quadratic variation which indicates the need for a stochastic modelization.

In systems (2) or (4), the variable V=(Vt)t≥0 represents the membrane potential in the neuron; the variables j=(jt)t≥0, j∈{n,m,h}, are termed gating variables and represent –in the sense of averages over a large number of channels– opening and closing of ion channels of certain types. The membrane potential can be measured intracellularly in good time resolution whereas the gating variables in the Hodgkin-Huxley model are not accessible to direct measurement.

In a sense of equivalence of experiments as in Holbach [15], the stochastic Hodgkin Huxley model (2)+(3) corresponds to a submodel of (1). This is of biological importance. Under the assumption that the stochastic model admits a fixed starting point which does not depend on θ:=(ϑ,τ), we can estimate the components ϑ>0 and τ>0 of the unknown parameter θ=(ϑ,τ) in equations (2)+(3) from the evolution of the membrane potential alone, and have at our disposal simple and explicit estimators ˘θ(n)=(˘ϑ(n),˘τ(n)) with the following two properties i) and ii).

converge as n→∞ to

where ˜W=(˜W(1),˜W(2)) is two-dimensional standard Brownian motion. Here C is an arbitrary constant, and L:IR2→[0,∞) any loss function which is continuous, subconvex and bounded.

ii) We can compare the sequence of estimators ˘θ(n)=(˘ϑ(n),˘τ(n)) for θ=(ϑ,τ) in (5) to arbitrary estimator sequences T(n)=(T(1)(n),T(2)(n)) which can be defined from observation of the membrane potential up to time n, provided their rescaled estimation errors –using the same norming as in (5)– are tight. For all such estimator sequences,

is always greater or equal than the limit in (6). This is the assertion of the local asymptotic minimax theorem. It makes sure that asymptotically as n→∞, it is impossible to outperform the simple and explicit estimator sequence ˘θ(n)=(˘ϑ(n),˘τ(n)) which we have at hand.

The paper is organized as follows. Section 2 collects for later use convergence results for certain functionals of the Ornstein-Uhlenbeck process. Section 3 deals with local asymptotic normality (LAN) for the model (1): proposition 1 and theorem 1 in section 3.1 prove LAN, the local asymptotic minimax theorem is corollary 1 in section 3.1; we introduce and investigate estimators for θ=(ϑ,τ) in sections 3.2 and 3.3; theorem 2 in section 3.4 states their asymptotic efficiency. The application to parameter estimation in the stochastic Hodgkin-Huxley model (2)+(3) based on observation of the membrane potential is the topic of the final section 4: see theorem 3 and corollary 2 there.

2 Functionals of the Ornstein Uhlenbeck process

of trajectories gives the result in this case.  □

Lemma 2: For X as above we have for every ℓ∈IN

Proof: This is integration by parts

where B is standard Brownian motion.

and have for every ℓ∈IN0

In case ℓ=0, the right hand side is −(Xr−X0)+σWr, and the scaling property of Brownian motion combined with ergodicity of X yields weak convergence as asserted. In case ℓ≥1, lemma 2 transforms the first term on the right hand side of (9), and we have

The martingale convergence theorem (Jacod and Shiryaev [21], VIII.3.24) shows that

converges weakly in the Skorohod path space D([0,∞)IR) to a continuous limit martingale with angle bracket t→12ℓ+1t2ℓ+1, i.e. to

Scaled in the same way, the first term on the right hand side of (10)

is negligible in comparison to (11), uniformly on compact t-intervals, by ergodicity of X.   □

Lemma 4: a) For every ℓ∈IN we have an expansion

b) For every ℓ∈IN, we have joint weak convergence as n→∞

3 The statistical model of interest

where R(⋅) is a sufficiently smooth deterministic function which depends on some finite-dimensional parameter ϑ, and where the Ornstein Uhlenbeck process X=(Xt)t≥0, unique strong solution to

depends on a parameter τ>0. The starting point X0≡x0 is deterministic. Then Y solves the SDE

where S depending on ϑ and τ is given by

Conversely, if a process Y is solution to an SDE of type (16), then solving R′=−τR+S we get a representation (14) for Y where

For examples of parametric models of this type, see e.g.

We wish to estimate the unknown parameter θ:=(ϑ,τ) based on time-continuous observation of Y in (14) over a long time interval, in the model

where trajectories of Y tend to ∞ almost surely as t→∞. Thus the parametrization is

and in SDE (16) which governs the observation Y, S depending on θ=(ϑ,τ) has the form

For pairs θ′≠θ in Θ

Qθ′, Qθ are locally equivalent relative to G, and we write

so we exploit (14) to write for short

where X under θ=(ϑ,τ) is the Ornstein Uhlenbeck process (15), and where

Localization at θ∈Θ will be as follows: with notation

in place of θ′ into (23); finally we rescale time. Define

Proposition 1 : a) For fixed 0<t<∞, components of Jn,θ(t) converge Qθ-almost surely as n→∞ to those of the deterministic process

b) Let ˜W denote a two-dimensional standard Brownian motion with components ˜W(1) and ˜W(2). In the cadlag path space D=D([0,∞),IRp+2) ([21], chapters VI and VIII), martingales Sn,θ under Qθ converge weakly as n→∞ to the limit martingale

Proof : The proof is in several steps. 1) We specify the angle bracket process Jn,ϑ of Sn,ϑ under Qθ. Its state at time t

is a symmetric matrix of size (p+2)×(p+2). Taking into account the norming factor in front of Sn,θ in (27) we consider throughout cJn,θ. The entries are given as follows. We have

in first and last position, and in-between for 1≤j≤p

For the last column of cJn,θ(t), the first entry cJ(0,p+1)n,θ(t) has been given above, the last entry is

in-between we have for 1≤j≤p

It remains to consider the three integrals which are not deterministic: here lemma 1 establishes almost sure convergence

as n→∞ under Qθ. This proves almost sure convergence of the components of <span aria-hidden="true" class="