This paper describes a novel method to approximate the polynomial coefficients of regression functions, with particular interest on multi-dimensional classification. The derivation is simple, and offers a fast, robust classification technique that is resistant to over-fitting. 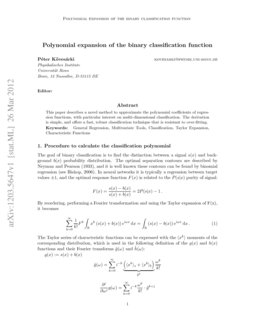 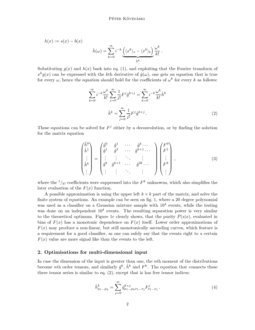 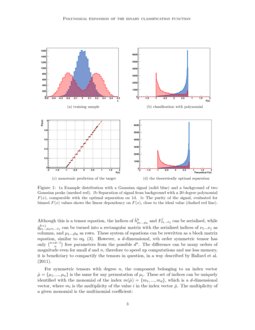 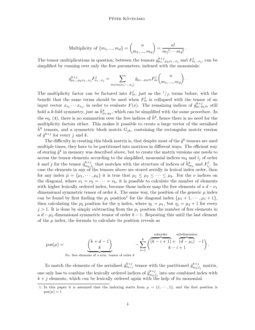 A library to store covariants of a multivariate polynomial, with fast evaluation and random access

1 Procedure to calculate the classification polynomial

The goal of binary classification is to find the distinction between a signal s(x) and background b(x)probability distribution. The optimal separation contours are described by Neyman and Pearson (1933), and it is well known these contours can be found by binomial regression (see Bishop, 2006)

. In neural networks it is typically a regression between target values

±1, and the optimal response function F(x) is related to the P(s|x) purity of signal:

By reordering, performing a Fourier transformation and using the Taylor expansion of F(x), it becomes

The Taylor series of characteristic functions can be expressed with the ⟨xk⟩moments of the corresponding distribution, which is used in the following definition of the g(x) and h(x) functions and their Fourier transforms ^g(ω) and ^h(ω):

Substituting g(x) and h(x) back into eq. (1), and exploiting that the Fourier transform of xkg(x) can be expressed with the kth derivative of ^g(ω), one gets an equation that is true for every ω, hence the equation should hold for the coefficients of ωk for every k as follows:

These equations can be solved for Fj either by a deconvolution, or by finding the solution for the matrix equation

where the 1/k! coefficients were suppressed into the Fk unknowns, which also simplifies the later evaluation of the F(x) function.

A possible approximation is using the upper left k×k part of the matrix, and solve the finite system of equations. An example can be seen on fig. 1

, where a 20 degree polynomial was used as a classifier on a Gaussian mixture sample with

104 events, while the testing was done on an independent 104 events. The resulting separation power is very similar to the theoretical optimum. Figure (c)c clearly shows, that the purity P(s|x), evaluated in bins of F(x) has a monotonic dependence on F(x) itself. Lower order approximations of F(x) may produce a non-linear, but still monotonically ascending curves, which feature is a requirement for a good classifier, as one can safely say that the events right to a certain F(x) value are more signal like than the events to the left.

In case the dimension of the input is greater than one, the nth moment of the distributions become n

^gk, ^hk and Fk. The equation that connects these three tensor series is similar to eq. (2), except that is has free tensor indices:

Although this is a tensor equation, the indices of ^hkμ1...μk and Fjν1...νj can be serialised, while ^gk+jμ1...μkν1...νj can be turned into a rectangular matrix with the serialised indices of ν1...νj as columns, and μ1...μk as rows. These system of equations can be rewritten as a block matrix equation, similar to eq. (3). However, a d-dimensional, nth order symmetric tensor has only (n+d−1n) free parameters from the possible dn. The difference can be many orders of magnitude even for small d and n, therefore to speed up computations and use less memory, it is beneficiary to compactify the tensors in question, in a way described by Ballard et al. (2011).

For symmetric tensors with degree n

, the component belonging to an index vector

The tensor multiplications in question, between the tensors gk+jμ1...μkν1...νj and Fjν1...νj, can be simplified by running over only the free parameters, indexed with the monomials:

The multiplicity factor can be factored into Fjm, just as the 1/j! terms before, with the benefit that the same terms should be used when Fjm is collapsed with the tensor of an input vector xν1⋯xνj, in order to evaluate F(x). The remaining indices of ^gk+jμ1⋅μkm still hold a k-fold symmetry, just as ^hkμ1⋅μk, which can be simplified with the same procedure. In the eq. (4), there is no summation over the free indices of ^hk, hence there is no need for the multiplicity factors either. This makes it possible to create a large vector of the serialised ^hk tensors, and a symmetric block matrix Gjk, containing the rectangular matrix version of ^gk+j for every j and k.

The difficulty in creating this block matrix is, that despite most of the ^gk tensors are used multiple times, they have to be partitioned into matrices in different ways. The efficient way of storing ^gk in memory was described above, but to create the matrix versions one needs to access the tensor elements according to the simplified, monomial indices mk and lj of order k and j for the tensor ^gk+jmk,lj that matches with the structure of indices of ^hkmk and Fjlj. In case the elements in any of the tensors above are stored serially in lexical index order, then for any index ~μ={μ1,⋯,μk} it is true that μ1≤μ2≤⋯≤μk. For the ν indices on the diagonal, where ν1=ν2=⋯=νk, it is possible to calculate the number of elements with higher lexically ordered index, because those indices map the free elements of a d−ν1 dimensional symmetric tensor of order k. The same way, the position of the generic μ index can be found by first finding the p1 position111In this paper it is assumed that the indexing starts from μ={1,⋯,1}, and the first position is pos(μ)=1 for the diagonal index {μ1+1,⋯,μ1+1}, then calculating the p2 position for the η index, where η1=μ1, but ηj=μ2+1 for every j>1. It is done by simply subtracting from the p1 position the number of free elements in a d−μ2 dimensional symmetric tensor of order k−1. Repeating this until the last element of the μ index, the formula to calculate its position reveals as

The following example was made on a three dimensional sample, consisting of twelve non-overlapping, non-symmetric Gaussian peaks as signal and a flat background. The classifier is a 20 degree multi-polynomial, which was found by solving a matrix equation with 1771×1771 elements in a few seconds with the solver of the Lapack library (see Anderson et al., 1999). Calculating the elements of this matrix from 2×40 thousand events takes about 20 seconds on a single core 2 GHz computer.

Figure (a)a shows the histograms of the response, and although the F(x) values slightly overshoot ±1, the response vs. purity on fig. (b)b is still a strictly monotonically ascending curve, assuring that F(x)

approximates well the optimal classification contours. For higher dimensional inputs, it is usually enough to approximate the classifier function with a low degree polynomial to have a good estimate on the classification contours, or on the separating power of a new variable. Nevertheless, the method seems to be stable against overfitting, since as it is fed with well determined moments of the distributions, and not with the individual events itself; it is not expected to be sensitive to the high frequency noise associated with sampling. The method is also capable of fitting a non-binary target. In this case the

^hk tensors are expectation values of y target multiplied with the xk moments of the input parameters, ^hk=⟨y⋅xk⟩, while ^gk=⟨xk⟩.

As a remark, it must be noted, that since certain distributions have diverging moments, it is beneficiary to transform the distributions into compact phase spaces prior to training, in order to have evaluable results.

I would like to acknowledge the support of my colleges, particularly A. Elizabeth Nuncio Quiroz, Ian C. Brock and Eckhard von Törne.