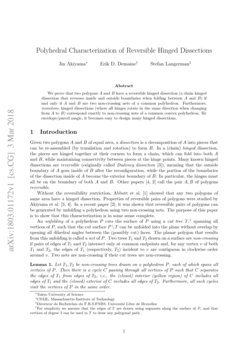 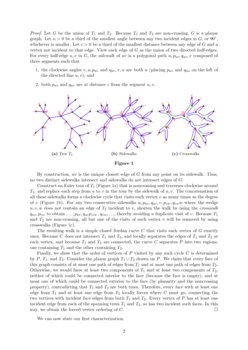 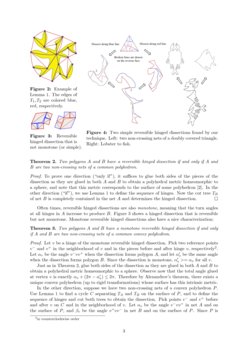 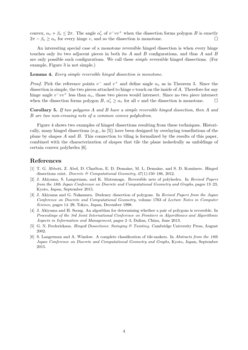 Given two polygons A and B of equal area, a dissection is a decomposition of A into pieces that can be re-assembled (by translation and rotation) to form B. In a (chain) hinged dissection, the pieces are hinged together at their corners to form a chain, which can fold into both A and B, while maintaining connectivity between pieces at the hinge points. Many known hinged dissections are reversible (originally called Dudeney dissection [3]), meaning that the outside boundary of A goes inside of B after the reconfiguration, while the portion of the boundaries of the dissection inside of A become the exterior boundary of B. In particular, the hinges must all be on the boundary of both A and B. Other papers [4, 2] call the pair A,B of polygons reversible.

Without the reversibility restriction, Abbott et al. [1] showed that any two polygons of same area have a hinged dissection. Properties of reversible pairs of polygons were studied by Akiyama et al. [3, 4]. In a recent paper [2], it was shown that reversible pairs of polygons can be generated by unfolding a polyhedron using two non-crossing nets. The purpose of this paper is to show that this characterization is in some sense complete.

An unfolding of a polyhedron P cuts the surface of P using a cut tree T,111For simplicity we assume that the edges of T are drawn using segments along the surface of P, and that vertices of degree 2 can be used in T to draw any polygonal path. spanning all vertices of P, such that the cut surface P∖T can be unfolded into the plane without overlap by opening all dihedral angles between the (possibly cut) faces. The planar polygon that results from this unfolding is called a net of P. Two trees T1 and T2 drawn on a surface are non-crossing if pairs of edges of T1 and T2 intersect only at common endpoints and, for any vertex v of both T1 and T2, the edges of T1 (respectively, T2) incident to v are contiguous in clockwise order around v. Two nets are non-crossing if their cut trees are non-crossing.

Let G be the union of T1 and T2. Because T1 and T2 are non-crossing, G is a planar graph. Let α>0 be a third of the smallest angle between any two incident edges in G, or 90∘, whichever is smaller. Let ε>0 be a third of the smallest distance between any edge of G and a vertex not incident to that edge. View each edge of G as the union of two directed half-edges. For every half-edge u,v in G, the sidewalk of uv is a polygonal path u,puv,quv,v composed of three segments such that

By construction, uv is the unique closest edge of G from any point on its sidewalk. Thus, no two distinct sidewalks intersect and sidewalks do not intersect edges of G.

Construct an Euler tour of T1 (Figure 0(a)) that is noncrossing and traverses clockwise around T1, and replace each step from u to v in the tour by the sidewalk of u,v. The concatenation of all these sidewalks forms a clockwise cycle that visits each vertex v as many times as the degree of v (Figure 0(b)). For any two consecutive sidewalks u,puv,quv,v,pvw,qvww where the wedge u,v,w does not contain an edge of T2 incident to v, shorten the walk by using the crosswalk quv,pvw to obtain …,puv,quvp,vw,qvw,…, thereby avoiding a duplicate visit of v. Because T1 and T2 are non-crossing, all but one of the visits of each vertex v will be removed by using crosswalks (Figure 0(c)).

The resulting walk is a simple closed Jordan curve C that visits each vertex of G exactly once. Because C does not intersect T1 and T2, and locally separates the edges of T1 and T2 at each vertex, and because T1 and T2 are connected, the curve C separates P into two regions, one containing T1 and the other containing T2.

Finally, we show that the order of vertices of P visited by any such cycle C is determined by P, T1, and T2. Consider the planar graph T1∪T2 drawn on P. We claim that every face of this graph consists of at most one path of edges from T1 and at most one path of edges from T2. Otherwise, we would have at least two components of T1 and at least two components of T2, neither of which could be connected interior to the face (because the face is empty), and at most one of which could be connected exterior to the face (by planarity and the noncrossing property), contradicting that T1 and T2 are both trees. Therefore, every face with at least one edge from T1 and at least one edge from T2 locally forces where C must go, connecting the two vertices with incident face edges from both T1 and T2. Every vertex of P has at least one incident edge from each of the spanning trees T1 and T2, so has two incident such faces. In this way, we obtain the forced vertex ordering of C. ∎

We can now state our first characterization.

Two polygons A and B have a reversible hinged dissection if and only if A and B are two non-crossing nets of a common polyhedron.

To prove one direction (“only if”), it suffices to glue both sides of the pieces of the dissection as they are glued in both A and B to obtain a polyhedral metric homeomorphic to a sphere, and note that this metric corresponds to the surface of some polyhedron [2]. In the other direction (“if”), we use Lemma 1 to define the sequence of hinges. Now the cut tree TB of net B is completely contained in the net A and determines the hinged dissection. ∎

Two polygons A and B have a monotone reversible hinged dissection if and only if A and B are two non-crossing nets of a common convex polyhedron.

Just as in Theorem 2, glue both sides of the dissection as they are glued in both A and B to obtain a polyhedral metric homeomorphic to a sphere. Observe now that the total angle glued at vertex v is exactly αv+(2π−α′v)≤2π. Therefore by Alexandrov’s theorem, there exists a unique convex polyhedron (up to rigid transformations) whose surface has this intrinsic metric.

If two polygons A and B have a simple reversible hinged dissection, then A and B are two non-crossing nets of a common convex polyhedron.

Figure 4 shows two examples of hinged dissections resulting from these techniques. Historically, many hinged dissections (e.g., in [5]) have been designed by overlaying tessellations of the plane by shapes A and B. This connection to tiling is formalized by the results of this paper, combined with the characterization of shapes that tile the plane isohedrally as unfoldings of certain convex polyhedra [6].