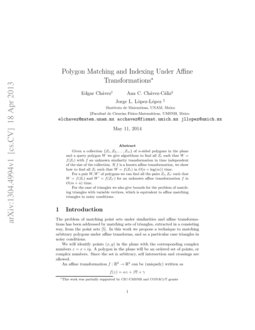 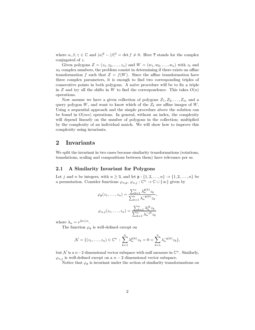 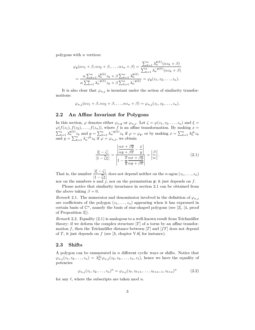 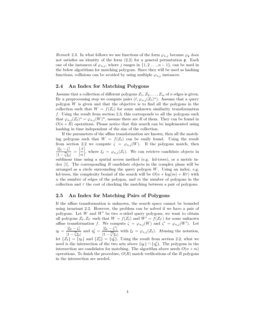 The problem of matching point sets under similarities and affine transformations has been addressed by matching sets of triangles, extracted in a consisting way, from the point sets [5]. In this work we propose a technique to matching arbitrary polygons under affine transforms, and as a particular case triangles in noisy conditions.

An affine transformation f:R2→R2 can be (uniquely) written as

Given polygons Z=(z1,z2,…,zn) and W=(w1,w2,…,wn) with zℓ and wℓ complex numbers, the problem consist in determining if there exists an affine transformation f such that Z=f(W). Since the affine transformation have three complex parameters, it is enough to find two corresponding triples of consecutive points in both polygons. A naïve procedure will be to fix a triple in Z and try all the shifts in W to find the correspondence. This takes O(n) operations.

Now assume we have a given collection of polygons Z1,Z2,…,Zm and a query polygon W, and want to know which of the Zℓ are affine images of W. Using a sequential approach and the simple procedure above the solution can be found in O(mn) operations. In general, without an index, the complexity will depend linearly on the number of polygons in the collection; multiplied by the complexity of an individual match. We will show how to improve this complexity using invariants.

We split the invariant in two cases because similarity transformations (rotations, translations, scaling and compositions between them) have relevance per se.

2.1 A Similarity Invariant for Polygons

The function φp is well-defined except on

Cn. Similarly, φn,j is well-defined except on a n−2 dimensional vector subspace.

Notice that φp is invariant under the action of similarity transformations on polygons with n vertices:

It is also clear that φn,j is invariant under the action of similarity transformations:

2.2 An Affine Invariant for Polygons

Please notice that similarity invariance in section 2.1 can be obtained from the above taking β=0.

The numerator and denominator involved in the definition of φn,j are coefficients of the polygon (z1,…,zn) appearing when it has expressed in certain basis of Cn, namely the basis of star-shaped polygons (see [2], [4, proof of Proposition 3]).

Equality (2.1) is analogous to a well-known result from Teichmüller theory: if we deform the complex structure [T] of a torus by an affine transformation f, then the Teichmüller distance between [T] and [fT] does not depend of T, it just depends on f (see [3, chapter V.6] for instance).

A polygon can be enumerated in n different cyclic ways or shifts. Notice that φn,j(z1,z2,…,zn)=λ2jnφn,j(z2,z3,…,zn,z1), hence we have the equality of potencies

for any ℓ, where the subscripts are taken mod n.

In what follows we use functions of the form φn,j because φp does not satisfies an identity of the form (2.2) for a general permutation p. Each one of the instances of φn,j, where j ranges in {1,2…,n−1}, can be used in the below algorithms for matching polygons. Since they will be used as hashing functions, collisions can be avoided by using multiple φn,j instances.

2.4 An Index for Matching Polygons

Assume that a collection of different polygons Z1,Z2,…,Zm of n edges is given. By a preprocessing step we compute pairs (ℓ,φn,j(Zℓ)n). Assume that a query polygon W is given and that the objective is to find all the polygons in the collection such that W=f(Zℓ) for some unknown similarity transformation f. Using the result from section 2.3, this corresponds to all the polygons such that φn,j(Zℓ)n=φn,j(W)n, assume there are R of them. They can be found in O(n+R) operations. Please notice that this search can be implemented using hashing in time independent of the size of the collection.

If the parameters of the affine transformation are known, then all the matching polygons such that W=f(Zℓ) can be easily found. Using the result from section 2.2 we compute ζ=φn,j(W). If the polygons match, then |ξℓ−ζ||1−¯¯¯ζξℓ|=∣∣∣βα∣∣∣, where ξℓ=φn,j(Zℓ). We can retrieve candidate objects in sublinear time using a spatial access method (e.g. kd-trees), or a metric index [1]. The corresponding R candidate objects in the complex plane will be arranged as a circle surrounding the query polygon W. Using an index, e.g. kd-trees, the complexity bound of the search will be O(n+log(m)+Rτ) with n the number of edges of the polygon, and m the number of polygons in the collection and τ the cost of checking the matching between a pair of polygons.

2.5 An Index for Matching Pairs of Polygons

If the affine transformation is unknown, the search space cannot be bounded using invariant 2.2. However, the problem can be solved if we have a pair of polygons. Let W and W′ be two n-sided query polygons, we want to obtain all polygons Zℓ,Zℓ′ such that W=f(Zℓ) and W′=f(Zℓ′) for some unknown affine transformation f. We compute ζ=φn,j(W) and ζ′=φn,j(W′). Let ηℓ=|ξℓ−ζ||1−¯¯¯ζξℓ| and η′ℓ=|ξℓ−ζ′||1−¯¯¯¯ζ′ξℓ| with ξℓ=φn,j(Zℓ). Abusing the notation, let {Zℓ}={ηℓ} and {Z′ℓ}={η′ℓ}. Using the result from section 2.2, what we need is the intersection of the two sets above {ηℓ}∩{η′ℓ}. The polygons in the intersection are candidates for matching. The algorithm above needs O(n+m) operations. To finish the procedure, O(R) match verifications of the R polygons in the intersection are needed.

For two unrelated polygons Wi,Wℓ it is possible that they collide, i.e. φn,j(Wi)n=φn,j(Wℓ)n without being an affine related. This increase the R candidate objects to be reviewed in algorithms above. To decrease the number of candidates we can use multiple instances of φn,j. Let φn,1,φn,2,…,φn,n−1 be the collection of instances of the affine invariant functions, and L1,L2,…,Ln−1 the respective lists of candidates. The true matches should be in the intersection. Notice that it is not necessary to use all the φn,j functions, only a subset of them.

A slightly more general setup is when there is an unknown noise function in the matching. The image of the query polygon is an affine transformation plus noise, namely W=(f(z1+Δz1),f(z2+Δz2),…,f(zn+Δzn)). We have bounded the difference for the case of triangles, this is explained below. We were not able to give a tight bound for general polygons. To simplify notation, λ3=e2πi/3 and φ3,1 will be denoted respectively by λ and φ in what follows.

We shall proof an estimation for perturbations of an equilateral triangle. For a real number

Triangles (z1,z2,z3)∈Ur can be seen as perturbations of the equilateral triangle (λ,λ2,1).

Here O(r3) stands for the product of r3 and a convergent power series in r.

First we claim that if we see triangles (z1,z2,z3)∈Ur as triangles in the form (0,1,τ), then τ lies in the non-shaded region showed in fig. 2, which will be described below. To proof the claim, note that the length of the longest edge of a triangle (z1,z2,z3) with vertices in Ur is at most √3+2r, and the length of the shortest edge is at least √3−2r. It follows that

with {j,k,l}={1,2,3}. Apollonius’ theorem says that if K>0, then the locus CK={τ∈H:|τ−1|=K|τ|} is an euclidean circle centered at the real axis. Since (λ,λ2,1) is a positive oriented triangle, we have that the imaginary part of τ is positive. Inequalities (3.3) imply that τ can not lay in the shaded regions of fig. 1, and τ can not lay in the rotations by R and R2 of the shaded regions. Hence τ should lay in a curvilinear hexagon ‘centered’ at −λ2 (see fig. 2). The claim is proved.

To conclude the proof of the lemma, consider the vertex

showed in fig. 2. The points R(ζ),R2(ζ) are also vertices of the curvilinear hexagon. The transformationation M maps the circle through ζ,R(ζ),R2(ζ) onto a circle of radius

centered at the origin.

The first two coefficients of the Taylor series result from a straightforward calculation. ∎

Now we deal with perturbations of a general triangle (z1,z2,z3).

The hypothesis in the next result are the same as in the previous lemma.

We saw above that triangles (z1,z2,z3)∈Ur are similar to triangles (0,1,τ) with τ inside the circle C of radius

centered at (ζ+ξ)/2; but now we are concerned with triangles with vertices in V.

Finally, the circle C is mapped by h to the ellipse

To obtain a bound for the image under φ of triangles with vertices in V, it is sufficient apply the transformation M (see equation (3.1)) to the ellipse