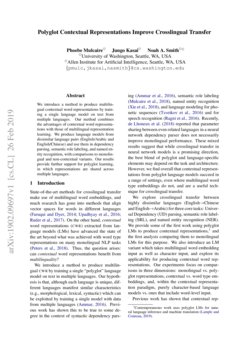 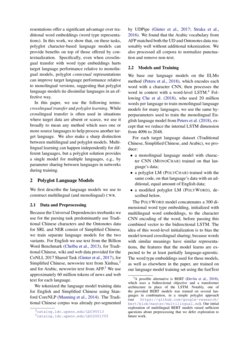 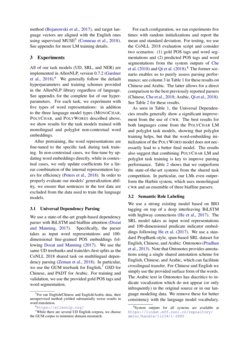 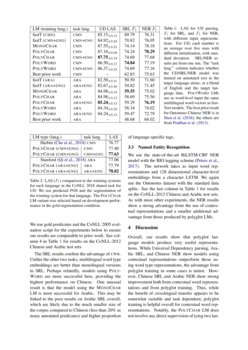 State-of-the-art methods for crosslingual transfer make use of multilingual word embeddings, and much research has gone into methods that align vector spaces for words in different languages

We introduce a method to produce multilingual cwr by training a single “polyglot” language model on text in multiple languages. Our hypothesis is that, although each language is unique, different languages manifest similar characteristics (e.g., morphological, lexical, syntactic) which can be exploited by training a single model with data from multiple languages Ammar (2016). Previous work has shown this to be true to some degree in the context of syntactic dependency parsing Ammar et al. (2016), semantic role labeling Mulcaire et al. (2018), named entity recognition Xie et al. (2018), and language modeling for phonetic sequences Tsvetkov et al. (2016) and for speech recognition Ragni et al. (2016). Recently, de Lhoneux et al. (2018)

reported that parameter sharing between even related languages in a neural network dependency parser does not necessarily improve monolingual performance. These mixed results suggest that while crosslingual transfer in neural network models is a promising direction, the best blend of polyglot and language-specific elements may depend on the task and architecture. However, we find overall that contextual representations from polyglot language models succeed in a range of settings, even where multilingual word type embeddings do not, and are a useful technique for crosslingual transfer.

We explore crosslingual transfer between highly dissimilar languages (English→Chinese and English→Arabic) for three core tasks: Universal Dependency (UD) parsing, semantic role labeling (SRL), and named entity recognition (NER). We provide some of the first work using polyglot LMs to produce contextual representations,111Contemporaneous work uses polyglot LMs for natural language inference and machine translation (Lample and Conneau, 2019). and the first analysis comparing them to monolingual LMs for this purpose. We also introduce an LM variant which takes multilingual word embedding input as well as character input, and explore its applicability for producing contextual word representations. Our experiments focus on comparisons in three dimensions: monolingual vs. polyglot representations, contextual vs. word type embeddings, and, within the contextual representation paradigm, purely character-based language models vs. ones that include word-level input.

In this paper, we use the following terms: crosslingual transfer and polyglot learning. While crosslingual transfer is often used in situations where target data are absent or scarce, we use it broadly to mean any method which uses one or more source languages to help process another target language. We also make a sharp distinction between multilingual and polyglot models. Multilingual learning can happen independently for different languages, but a polyglot solution provides a single model for multiple languages, e.g., by parameter sharing between languages in networks during training.

We first describe the language models we use to construct multilingual (and monolingual) cwr.

Because the Universal Dependencies treebanks we use for the parsing task predominantly use Traditional Chinese characters and the Ontonotes data for SRL and NER consist of Simplified Chinese, we train separate language models for the two variants. For English we use text from the Billion Word Benchmark Chelba et al. (2013), for Traditional Chinese, wiki and web data provided for the CoNLL 2017 Shared Task Ginter et al. (2017), for Simplified Chinese, newswire text from Xinhua,222catalog.ldc.upenn.edu/LDC95T13 and for Arabic, newswire text from AFP.333catalog.ldc.upenn.edu/LDC2001T55 We use approximately 60 million tokens of news and web text for each language.

We base our language models on the ELMo method Peters et al. (2018), which encodes each word with a character CNN, then processes the word in context with a word-level LSTM.444A possible alternative is BERT Devlin et al. (2018), which uses a bidirectional objective and a transformer architecture in place of the LSTM. Notably, one of the provided BERT models was trained on several languages in combination, in a simple polyglot approach (see https://github.com/google-research/bert/blob/master/multilingual.md). Our initial exploration of multilingual BERT models raised sufficient questions about preprocessing that we defer exploration to future work.

Following Che2018ElmoUD, who used 20 million words per language to train monolingual language models for many languages, we use the same hyperparameters used to train the monolingual English language model from Peters2018, except that we reduce the internal LSTM dimension from 4096 to 2048.

For each target language dataset (Traditional Chinese, Simplified Chinese, and Arabic), we produce:

The PolyWord model concatenates a 300 dimensional word type embedding, initialized with multilingual word embeddings, to the character CNN encoding of the word, before passing this combined vector to the bidirectional LSTM. The idea of this word-level initialization is to bias the model toward crosslingual sharing; because words with similar meanings have similar representations, the features that the model learns are expected to be at least partially language-agnostic. The word type embeddings used for these models, as well as elsewhere in the paper, are trained on our language model training set using the fastText method Bojanowski et al. (2017), and target language vectors are aligned with the English ones using supervised MUSE555For our English/Chinese and English/Arabic data, their unsupervised method yielded substantially worse results in word translation. Conneau et al. (2018). See appendix for more LM training details.

All of our task models (UD, SRL, and NER) are implemented in AllenNLP, version 0.7.2 Gardner et al. (2018).666https://allennlp.org/ We generally follow the default hyperparameters and training schemes provided in the AllenNLP library regardless of language. See appendix for the complete list of our hyperparameters. For each task, we experiment with five types of word representations: in addition to the three language model types (MonoChar, PolyChar, and PolyWord) described above, we show results for the task models trained with monolingual and polyglot non-contextual word embeddings.

After pretraining, the word representations are fine-tuned to the specific task during task training. In non-contextual cases, we fine-tune by updating word embeddings directly, while in contextual cases, we only update coefficients for a linear combination of the internal representation layers for efficiency Peters et al. (2018). In order to properly evaluate our models’ generalization ability, we ensure that sentences in the test data are excluded from the data used to train the language models.

We use a state-of-the-art graph-based dependency parser with BiLSTM and biaffine attention Dozat and Manning (2017). Specifically, the parser takes as input word representations and 100-dimensional fine-grained POS embeddings following Dozat and Manning (2017). We use the same UD treebanks and train/dev./test splits as the CoNLL 2018 shared task on multilingual dependency parsing Zeman et al. (2018). In particular, we use the GUM treebank for English,777While there are several UD English corpora, we choose the GUM corpus to minimize domain mismatch. GSD for Chinese, and PADT for Arabic. For training and validation, we use the provided gold POS tags and word segmentation.

For each configuration, we run experiments five times with random initializations and report the mean and standard deviation. For testing, we use the CoNLL 2018 evaluation script and consider two scenarios: (1) gold POS tags and word segmentations and (2) predicted POS tags and word segmentations from the system outputs of Che et al. (2018) and Qi et al. (2018).888System outputs for all systems are available at https://lindat.mff.cuni.cz/repository/xmlui/handle/11234/1-2885 The former scenario enables us to purely assess parsing performance; see column 3 in Table 1 for these results on Chinese and Arabic. The latter allows for a direct comparison to the best previously reported parsers (Chinese, Che et al., 2018; Arabic, Qi et al., 2018). See Table 2 for these results.

As seen in Table 1, the Universal Dependencies results generally show a significant improvement from the use of cwr. The best results for both languages come from the PolyChar LM and polyglot task models, showing that polyglot training helps, but that the word-embedding initialization of the PolyWord model does not necessarily lead to a better final model. The results also suggest that combining PolyChar LM and polyglot task training is key to improve parsing performance. Table 2 shows that we outperform the state-of-the-art systems from the shared task competition. In particular, our LMs even outperform the Harbin system, which uses monolingual cwr and an ensemble of three biaffine parsers.

We use a strong existing model based on BIO tagging on top of a deep interleaving BiLSTM with highway connections He et al. (2017). The SRL model takes as input word representations and 100-dimensional predicate indicator embeddings following He et al. (2017). We use a standard PropBank-style, span-based SRL dataset for English, Chinese, and Arabic: Ontonotes Pradhan et al. (2013). Note that Ontonotes provides annotations using a single shared annotation scheme for English, Chinese, and Arabic, which can facilitate crosslingual transfer. For Chinese and English we simply use the provided surface form of the words. The Arabic text in Ontonotes has diacritics to indicate vocalization which do not appear (or only infrequently) in the original source or in our language modeling data. We remove these for better consistency with the language model vocabulary. We use gold predicates and the CoNLL 2005 evaluation script for the experiments below to ensure our results are comparable to prior work. See column 4 in Table 1 for results on the CoNLL-2012 Chinese and Arabic test sets.

The SRL results confirm the advantage of cwr. Unlike the other two tasks, multilingual word type embeddings are better than monolingual versions in SRL. Perhaps relatedly, models using PolyWord are more successful here, providing the highest performance on Chinese. One unusual result is that the model using the MonoChar LM is most successful for Arabic. This may be linked to the poor results on Arabic SRL overall, which are likely due to the much smaller size of the corpus compared to Chinese (less than 20% as many annotated predicates) and higher proportion of language-specific tags.

We use the state-of-the-art BiLSTM-CRF NER model with the BIO tagging scheme Peters et al. (2017). The network takes as input word representations and 128 dimensional character-level embeddings from a character LSTM. We again use the Ontonotes dataset with the standard data splits. See the last column in Table 1 for results on the CoNLL-2012 Chinese and Arabic test sets. As with most other experiments, the NER results show a strong advantage from the use of contextual representations and a smaller additional advantage from those produced by polyglot LMs.

The authors thank Mark Neumann for assistance with the AllenNLP library and the anonymous reviewers for their helpful feedback. This research was funded in part by NSF grant IIS-1562364, the Funai Overseas Scholarship to JK, and the NVIDIA Corporation through the donation of a GeForce GPU.

In this supplementary material, we provide hyperparameters used in our models for easy replication of our results.

Seen in Table 3 is a list of hyperparameters for our language models. We generally follow Peters et al. (2018) and use their publicly available code for training.999https://github.com/allenai/bilm-tf For character only models, we halve the LSTM and projection sizes to expedite training and to compensate for the greatly reduced training data—their hyperparameters were tuned on around 30M sentences, while we used less than 3M sentences (60-70M tokens) per language.

For SRL, we again follow the hyperparameters given in AllenNLP (Table 5). The one exception is that we used 4 layers of alternating BiLSTMs instead of 8 layers to expedite the training process.

We again use the hyperparameter configurations provided in AllenNLP. See Table 6 for details.