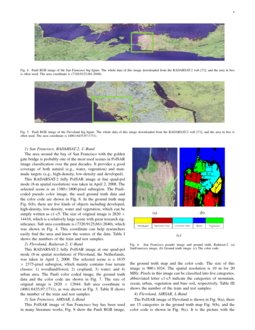 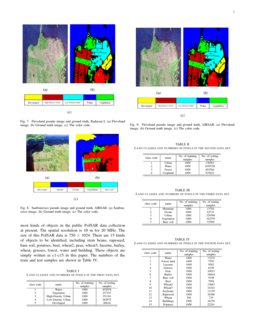 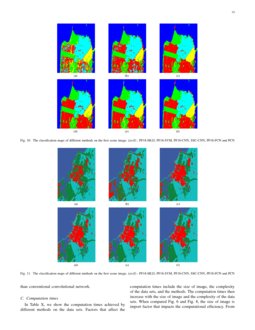 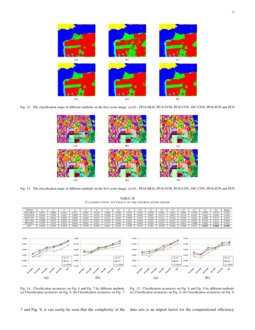 Polarimetric synthetic aperture radar (PolSAR) images collected with airborne and satellite sensors are a wealthy source of information concerning the Earth’s surface, and have been widely used in urban planning, agriculture assessment and environment monitoring [wang2017comparison, voormansik2016observations]. These applications require the fully understanding and interpretation of PolSAR images.

Hence, PolSAR image interpretation is of much significance in theory and application. Land use classification of PolSAR images are an important and indispensable research topic since these images contain rich character of the target (e.g., scattering properties, geometric shapes, and the direction of arrival). The land use classification is arranging the pixels to the different categories according to the certain rule. The common objects within the PolSAR images include land, buildings, water, sand, urban areas, vegetation, road, bridge and so on [liuf2016hierarchical]

. In order to distinguish them, the features of the pixels should be fully extracted and mined. With the development of the PolSAR image classification, many feature extraction algorithms based on physical scattering mechanisms have been introduced. The feature extraction techniques based on polarimetric characteristics can be divided into two kinds: coherent target decomposition and incoherent target decomposition. The former acts on the scattering matrix to characterize completely polarized scattered waves, which contains the fully polarimetric information. The latter acts only on the mueller matrix, covariance matrix, or coherency matrix in order to characterize partially polarized waves

The unsupervised classification approaches design a function to describe hidden structure from unlabeled data. The traditional methods always make a decision rule to cluster PolSAR data into different groups, and the number of groups is also a hyper-parameter. There are a lot of unsupervised classification methods for PolSAR data, such as H/α complex Wishart classifier [Lee2002Unsupervised], polarimetric scattering characteristics preserved method [Lee2004Unsupervised]

, the classification based on deep learning

[Liu2016Large]. There are many semi-supervised classification for PolSAR data, such as the classification based on hypergraph learning [Wei2014PolSAR], the method based on parallel auction graph [Liu2016Fast], spatial-anchor graph [Liu2016Large], etc. Unlike unsupervised approaches and semi-supervised approaches, the supervised classifications use enough labeled samples to train the classifiers which can be applied to determine the class of other samples. Lots of methods have been introduced, including maximum likelihood [Harant2010Fisher]

, a specific deep model for polarimetric synthetic aperture radar (POLSAR) image classification is proposed, which is named as Wishart deep stacking network (W-DSN). A fast implementation of Wishart distance is achieved by a special linear transformation, which speeds up the classification of POLSAR image. In

, a new type of restricted boltzmann machine (RBM) is specially defined, which we name the Wishart-Bernoulli RBM (WBRBM), and is used to form a deep network named as Wishart Deep Belief Networks (W-DBN). In

, a new type of autoencoder (AE) and convolutional autoencoder (CAE) is specially defined, which we name them Wishart-AE (WAE) and Wishart-CAE (WCAE). In

What is more, fullly convolutional network (FCN) is successfully used for natural image semantic segmentation [Badrinarayanan2017SegNet, Audebert2016Semantic, shelhamer2017fully, siam2018rtseg, tsai2018learning, liang2018dynamic, chen2018deeplab] and remote sense image classification based on one by one pixel [isikdogan2017surface, cheng2017automatic, jiao2017deep, volpi2017dense]. In [isikdogan2017surface], a fully convolutional neural network is trained to segment water on Landsat imagery. In [cheng2017automatic], a novel deep model, i.e.,a cascaded end-to-end convolutional neural network (CasNet), was proposed to simultaneously cope with the road detection and centerline extraction tasks. Specifically, CasNet consists of two networks. One aims at the road detection task. The other is cascaded to the former one, making full use of the feature maps produced formerly, to obtain the good centerline extraction. In [jiao2017deep], a novel hyperspectral image classification (HSIC) framework, named deep multiscale spatial-spectral feature extraction algorithm, was proposed based on fully convolutional neural network. In [volpi2017dense], the authors presented a CNN-based system relying on a downsample-then-upsample architecture. Specifically, it first learns a rough spatial map of high-level representations by means of convolutions and then learns to upsample them back to the original resolution by deconvolution. By doing so, the CNN learns to densely label every pixel at the original resolution of the image.

Inspired by the previous research works, a supervised PolSAR image classification method based on polarimetric scattering coding and convolution network is proposed in this paper. Our goal is to solve the problems of PolSAR data coding, feature extraction, and land cover classification. Our work can be summarized into three main parts as follows.

In the PolSAR image classification task, the land use classes are determined by different analysis include polarization of the target responses, scattering heterogeneity determination and determination of the polarization state for target discrimination, which need to be decided by different features. It is hard for researchers to consider all kinds of features. PolSAR data is a two-dimensional complex matrix. The traditional feature extraction method represents PolSAR data into a one-dimensional vector, which destroys data space structures. In order to solve this problem, the intuitive way is to express the original data directly. In this paper, the polarimetric scattering coding is proposed to express the original data directly, which can maintain structure information completely. Next, the polarimetric scattering coding matrix obtained by the encoding is fed into a classifier based on fully convolutional network. The following of this section consists of three parts. First, representation of PolSAR images is given. Second, the polarimetric scattering coding for complex scattering matrix S is explained. Third, the proposed method called polarimetric convolutional network is presented.

The fully PolSAR measures the amplitudes and phases of backscattering signals in four combinations: 1) HH; 2) HV; 3) VH; and 4) VV. Where H means horizontal mode, V means vertical mode. These signals form a 2×2 complex scattering matrix S to represent the information for one pixel, which relates the incident and the scattered electric fields. Scattering matrix S can be expressed as

where superscript T denotes the transpose of vector.

where <⋅> denotes the average value in the data processing stage, and the superscript H stands for the complex conjugate and transpose of vector and matrix.

φ represents the function of polarimetric scattering coding, when x>0, y<0. From Eq. (1), scattering matrix S can been written as

Because S is a complex matrix, we can write its elements as follows