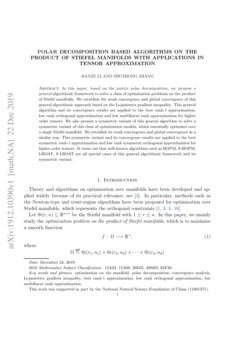 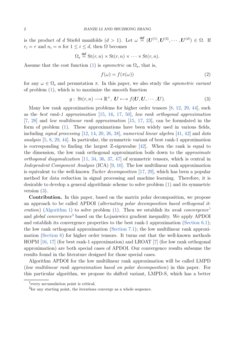 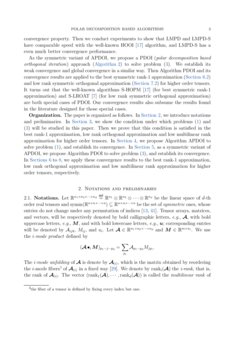 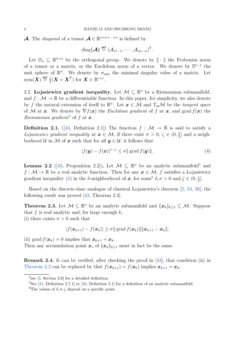 In this paper, we propose a Jacobi-type algorithm to solve the low rank ...
Jianze Li, et al. ∙

In this paper, we mainly study the gradient based Jacobi-type algorithms...
Zhou Sheng, et al. ∙

On the convergence of Jacobi-type algorithms for Independent Component Analysis

A General Framework for a Class of Quarrels: The Quarrelling Paradox Revisited

Let St(r,n)⊆Rn×r be the Stiefel manifold with 1≤r≤n. In this paper, we mainly study the optimization problem on the product of Stiefel manifolds, which is to maximize a smooth function

Assume that the cost function (1) is symmetric on Ωs, that is,

for any ω∈Ωs and permutation π. In this paper, we also study the symmetric variant of problem (1), which is to maximize the smooth function

. In particular, the symmetric variant of best rank-1 approximation is corresponding to finding the largest Z-eigenvalue

[42]. When the rank is equal to the dimension, the low rank orthogonal approximation boils down to the approximate orthogonal diagonalization [11, 34, 36, 37, 47] of symmetric tensors, which is central in Independent Component Analysis (ICA) [9, 10]. The low multilinear rank approximation is equivalent to the well-known Tucker decomposition [17, 29]

, which has been a popular method for data reduction in signal processing and machine learning. Therefore, it is desirable to develop a general algorithmic scheme to solve problem (

Contribution. In this paper, based on the matrix polar decomposition, we propose an approach to be called APDOI (alternating polar decomposition based orthogonal iteration) (Algorithm 1) to solve problem (1). Then we establish its weak convergence111every accumulation point is critical. and global convergence222for any starting point, the iterations converge as a whole sequence. based on the Łojasiewicz gradient inequality. We apply APDOI and establish its convergence properties to the best rank-1 approximation (Section 6.1); the low rank orthogonal approximation (Section 7.1); the low multilinear rank approximation (Section 8) for higher order tensors. It turns out that the well-known methods HOPM [16, 17] (for best rank-1 approximation) and LROAT [7] (for low rank orthogonal approximation) are both special cases of APDOI. Our convergence results subsume the results found in the literature designed for those special cases.

Algorithm APDOI for the low multilinear rank approximation will be called LMPD (low multilinear rank approximation based on polar decomposition) in this paper. For this particular algorithm, we propose its shifted variant, LMPD-S, which has a better convergence property. Then we conduct experiments to show that LMPD and LMPD-S have comparable speed with the well-known HOOI [17] algorithm, and LMPD-S has a even much better convergence performance.

Let Rn1×n2×⋯×nddef=Rn1⊗Rn2⊗⋯⊗Rnd be the linear space of d-th order real tensors and symm(Rn×n×⋯×n)⊆Rn×n×⋯×n be the set of symmetric ones, whose entries do not change under any permutation of indices [13, 41]

. Tensor arrays, matrices, and vectors, will be respectively denoted by bold calligraphic letters,

The i-mode unfolding of A is denote by A(i), which is the matrix obtained by reordering the i-mode fibers333the fiber of a tensor is defined by fixing every index but one. of A(i) in a fixed way [29]. We denote by ranki(A) the i-rank, that is, the rank of A(i). The vector (rank1(A),⋯,rankd(A)) is called the multilinear rank of A. The diagonal of a tensor A∈Rn×n×⋯×n is defined by

the minimal singular value of a matrix. Let

Let M⊆Rn be a Riemannian submanifold, and f:M→R be a differentiable function. In this paper, for simplicity, we also denote by f the natural extension of itself to Rn. Let x∈M and TxM be the tangent space of M at x. We denote by ∇f(x) the Euclidean gradient of f at x, and \operator@fontgradf(x) the Riemannian gradient444see [3, Section 3.6] for a detailed definition. of f at x.

Based on the discrete-time analogue of classical Łojasiewicz’s theorem [2, 33, 39], the following result was proved [43, Theorem 2.3].

Let M⊆Rn be an analytic submanifold and {xk}k≥1⊆M. Suppose that f is real analytic and, for large enough k, (i) there exists σ>0 such that

(ii) \operator@fontgradf(xk)=0 implies that xk+1=xk. Then any accumulation point x∗ of {xk}k≥1 must in fact be the same.

We first discuss the condition, under which problems (1) and (3) will be studied in this paper. This condition is motivated by the tensor approximation problems in Section 3.2.1, Section 3.3.1 and Section 3.4 .

In this paper, we assume that problem (1) always satisfies the restricted 1α−homogeneity condition, which means that there is some fixed α∈(0,1) such that, for any ν(i)∈Ω(i) and 1≤i≤d, it holds that

In this paper, we assume that problem (3) always satisfies the 1β−homogeneity condition, which means that there is some fixed β∈(0,1) such that

Then we get that

It is easy to see that the cost function (11) satisfies condition (6) with α=12. Moreover, by the Cauchy-Schwarz inequality, we have that

Suppose that d is even. Let

Let ψ(X)def=HX be the linear map and

where W=D∙1YT∙2YT⋯∙dYT. Note that γi(Y)=∑mj=1μjydji. We see that γi is convex, and thus τi=γi∘ψ is also convex. ∎

where D∈Rr×r×⋯r is the diagonal tensor satisfying that \operator@fontdiag{D}=(μ1,⋯,μr)T. It was proved [7] that problem (16) is equivalent to the maximization of

Then it can be verified that

Then the cost function (17) is partially convex by (7). The proof is complete. ∎

satisfies that ⟨uℓ1,uℓ2⟩=0 for ℓ1≠ℓ2. It was proved [7] that problem (19) is equivalent to the maximization of

where ranki(B)≤ri for 1≤i≤d. Note that any such B can be decomposed as

Let U′∈St(ri,ni). By the Cauchy-Schwarz inequality, it is easy to see that

4. Algorithm APDOI on the product of Stiefel manifolds

which is close to a polar decomposition form of ∇h(i)(U(i)∗).

(ii) U is the best orthogonal approximation to X, that is,

Inspired by the decomposition form in (25), we propose the following alternating polar decomposition based orthogonal iteration (APDOI) algorithm to solve problem (1). We assume that the starting point ω(0) satisfies that f(ω(0))>0 without loss of generality.

(i) Since U∗=U, we see that ∇h(U)=UP is a polar decomposition. It follows that UT∇h(U)=P is symmetric, and thus

which means that UT∇h(U) is symmetric. Note that UT∇h(U) is positive semidefinite and ∇h(U) is of full rank. Then ∇h(U)=UUT∇h(U) is the unique polar decomposition of ∇h(U) by Lemma 4.1(iii). Therefore, we get that U∗=U. ∎