In this paper, we propose a new polar coding scheme with molecular programming, which is capable of highly parallel implementation at a nano-scale without a need of electrical power sources. We designed chemical reaction networks (CRN) to employ either successive cancellation (SC) or maximum-likelihood (ML) decoding schemes for short polar codes. From ordinary differential equation (ODE) analysis of the proposed CRNs, we demonstrate that SC and ML decoding achieve accurate computations across fully-parallel chemical reactions. We also make a comparison in terms of the number of required chemical reactions and species, where the superiority of ML decoder over SC decoder is observed for very short block lengths. 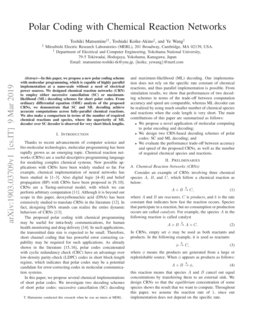 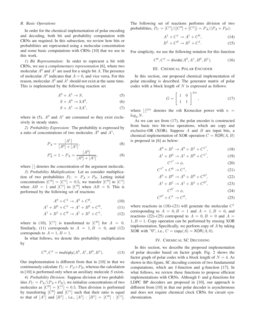 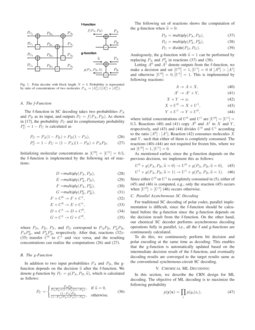 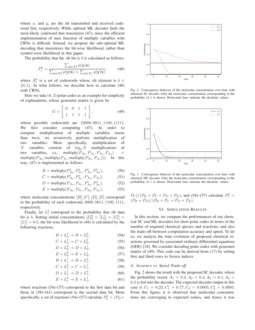 Thanks to recent advancements of computer science and bio-molecular technologies, molecular programming has been rapidly grown as an emerging topic. Chemical reaction networks (CRNs) are a useful descriptive programming language for modeling complex chemical systems. New possible applications with CRNs have been widely studied so far. For example, chemical implementation of neural networks has been studied in

[1, 2, 3]. Also digital logic [4, 5, 6, 7, 8] and belief propagation (BP) with CRNs have been proposed in [9, 10]. CRNs are a Turing-universal model, with which we can perform arbitrary computation [11]. Although it is beyond our scope in this paper, deoxyribonucleic acid (DNA) has been extensively studied to translate CRNs in the literature [12]. In fact, designing DNA strands can realize the entire dynamic behaviors of CRNs [13].

The proposed polar coding with chemical programming may be useful for intra-body communications, for human health monitoring and drug delivery [14]. In such applications, the transmitted data size is expected to be small. Therefore, short channel coding that has powerful error correcting capability may be required for such applications. As already shown in the literature [15, 16], polar codes concatenated with cyclic redundancy check (CRC) have an advantage over low-density parity-check (LDPC) codes in short block-length regime, which indicates that polar codes may be a potential candidate for error-correcting codes in molecular communication systems.

In this paper, we propose several chemical implementations of short polar codes. We investigate two decoding schemes of short polar codes: successive cancellation (SC) decoding and maximum-likelihood (ML) decoding. Our implementation does not rely on the specific rate constant of chemical reactions, and thus parallel implementation is possible. From simulation results, we show that performances of two decoding schemes in terms of the trade-off between computation accuracy and speed are comparable, whereas ML decoder can be realized by using much smaller number of chemical species and reactions when the code length is very short. The main contributions of this paper are summarized as follows:

Consider an example of CRNs involving three chemical species A, B, and C, which follow a chemical reaction as below:

where A and B are reactants, C is products, and k is the rate constant that indicates how fast the reaction occurs. Species that participate in a reaction, but no consumption or production occurs are called catalysts. For example, the species A in the following reaction is called catalyst

In CRNs, empty set ϕ may be used as both reactants and products. In the following example, it is used as reactants

where ϕ means the products are generated from a large or replenishable source. When ϕ appears as products as follows:

this reaction means that species A and B cancel out equal concentrations by transferring them to an external sink. We design CRNs so that the equilibrium concentration of some species shows the result that we want to compute. Throughout this paper, we assume the reaction rate of 1, since our implementation does not depend on the specific rate.

In order for the chemical implementation of polar encoding and decoding, both bit and probability computation with CRNs are required. In this subsection, we review how bits or probabilities are represented using a molecular concentration and some basic computations with CRNs

In order to represent a bit with CRNs, we use a complementary representation [6], where two molecular A0 and A1 are used for a single bit A. The presence of molecular A0 indicates that A=0, and vice versa. For this reason, molecular A0 and A1 should not exist at the same time. This is implemented by the following reaction set

where in (5), A0 and A1 are consumed so they exist exclusively in steady states.

The probability is expressed by a ratio of concentrations of two molecules A0 and A1,

where [⋅] denotes the concentration of the argument molecule.

Let us consider multiplication of two probabilities PC=PA×PB. Letting initial concentrations [C0]=[C1]=0.5, we transfer [C0] to [C1] when AB=1 and [C1] to [C0] when AB=0. This is performed by the following set of reactions

In what follows, we denote this probability multiplication by

Our implementation is different from that in [10] in that we continuously calculate PC=PA×PB, whereas the calculation in [10] is performed only when an auxiliary molecule S exists.

For simplicity, we use the following notation for this function

In this section, our proposed chemical implementation of polar encoding is described. The generator matrix of polar codes with a block length of N is expressed as follows:

As we can see from (17), the polar encoder is constructed from basic two bit-wise operations, which are copy and exclusive-OR (XOR). Suppose A and B are input bits, a chemical implementation of XOR operation C=XOR(A,B) is proposed in [6] as below:

In this section, we describe the proposed implementation of polar decoder based on factor graph. Fig. 2 shows the factor graph of polar codes with a block length of N=4. As shown in this figure, SC decoding consists of two fundamental computations, which are f-function and g-function [17]. In what follows, we review these functions to propose efficient implementations with CRNs. Although f- and g-functions for LDPC BP decoders are proposed in [10], our approach is different from [10] in that our polar decoder is asynchronous and does not require chemical clock CRNs for circuit synchronization.

The f-function in SC decoding takes two probabilities PA and PB as its input, and outputs PC=f(PA,PB). As shown in [17], the probability PC and its complementary probability PcC=1−PC is calculated as

Initializing molecular concentrations as [C0]=[C1]=0.5, the f-function is implemented by the following set of reactions:

where PD, PE, PF, and PG correspond to PAPB, PcAPB, PAPcB, and PcAPcB, respectively. After that, reactions (32)–(35) transfer C0 to C1 and vice versa, and the resulting concentrations can realize the computations (26) and (27).

In addition to two input probabilities PA and PB, the g-function depends on the decision ˆu after the f-function. We denote g-function by PC=g(PA,PB,ˆu), which is calculated as follows:

The following set of reactions shows the computation of the g-function when ˆu=0:

Analogously, the g-function with ˆu=1 can be performed by replacing PA and PcA in reactions (37) and (38).

As mentioned earlier, since the g-function depends on the previous decision, we implement this as follows:

To do this, we continuously perform bit decision and polar encoding at the same time as decoding. This enables that the g-function is automatically updated based on the intermediate decision result of the f-function, and eventually decoding results are converged to the target results same as the conventional synchronous-circuit SC decoding.

In this section, we describe the CRN design for ML decoding. The objective of ML decoding is to maximize the following probability

where xi and yi are the ith transmitted and received codeword bits, respectively. While optimal ML decoder finds the most-likely codeword that maximizes (47), since the efficient implementation of max function of multiple variables with CRNs is difficult. Instead, we propose the sub-optimal ML decoding that maximizes the bit-wise likelihood, rather than symbol-wise likelihood in this paper.

The probability that the ith bit is b is calculated as follows:

where Xbi is a set of codewords whose ith element is b∈{0,1}. In what follows, we describe how to calculate (48) with CRNs.

Here we take (4, 2) polar codes as an example for simplicity of explanations, whose generator matrix is given by

Finally, let Lbi correspond to the probability that ith data bit is b. Setting initial concentrations [L00]=[L10]=[L01]=[L11]=0.5, the bit-wise likelihood in (48) is calculated by the following reactions,

In this section, we compare the performances of our chemical SC and ML decoders for short polar codes in terms of the number of required chemical species and reactions, and also the trade-off between computation accuracy and speed. To do so, we analyze the time evolution of proposed chemical reactions governed by associated ordinary differential equations (ODE)[18]. We consider decoding polar codes with generator matrix of (49). This code can be derived from (17) by setting first and third rows to frozen indices.

shows the result with the proposed SC decoder, where the probability vector

Table I summarizes the evolution of molecular concentration over time in SC and ML decoding. From this table, we observe that for both SC and ML decoding CRNs, molecular concentrations can converge to expected values as time proceeds. It is also observed that the convergence of molecule C2 of SC decoding is slower than that of ML decoding, which stems from the delay associated with the decision of the previous bit used in the g-function.

In this paper, we have proposed new polar coding scheme based on molecular programming. Our polar coding does not rely on clock, and thus enables highly parallel implementation. Two decoding schemes for short polar codes based on SC and ML decoding have been investigated. ODE simulation results demonstrated that our proposed CRNs of SC and ML decoders can realize fully-parallel and accurate decoding over chemical reactions without a need of power supply, while ML decoder requires much less chemical species and reactions when the code length is very short. To the best of our knowledge, our research is the first attempt to implement polar encoding and decoding via CRNs, which can be used for intra-body molecular communications without electric energy supplies.